From confusion to threats, some Pa. nursing home residents aren’t getting their coronavirus stimulus checks

The reasons vary from apparent misunderstandings to facilities wrongly holding onto the $1,200 or, in one extreme case, threatening to evict residents unless they turned over the funds.

HARRISBURG — Federal stimulus checks aren’t reaching a growing number of seniors in Pennsylvania’s long-term-care homes, depriving them of money needed now more than ever to connect with family amid a pandemic that has overcome their facilities and isolated them from visitors.

The reasons vary from apparent misunderstandings to facilities wrongly holding onto the $1,200 or, in one extreme case, threatening to evict residents unless they turned over the funds, according to watchdog advocates as well as state agencies that oversee the homes.

No matter the explanation, the people responsible for fielding and resolving complaints from seniors in these facilities said the checks belong to the residents.

“It is their personal private property and can be spent however they want,” said Carolyn Tenaglia, the regional long-term-care ombudsman for northeastern Pennsylvania. “But what we’re hearing is families and residents are having trouble convincing facilities that it’s not money that needs to be surrendered.”

Since the pandemic began in March, the state’s Long-Term-Care Ombudsman Program has received 76 complaints from residents or family members related to finances and personal property — many of which concern the stimulus checks, the office said. The state Attorney General’s Office has received a handful of complaints about facilities forcing residents to turn over portions of their stimulus checks, while the Departments of Health and Human Services have received one complaint each about the issue.

In at least one nursing home, multiple residents were threatened with eviction if they didn’t use the funds to pay outstanding debt, said Mary Ann May, long-term-care ombudsman for Luzerne and Wyoming Counties. One resident has been negotiating with the facility to use a portion of the funds to buy a gift for her grandchild, May said. She declined to name the home for fear of residents there facing retribution.

There are likely many similar stories that remain unheard, advocates said.

Throughout the pandemic, long-term-care residents have been largely isolated from the outside world. Since mid-March, state and federal officials have suspended most inspections and barred visitors, and ombudsman programs have been communicating only by intermittent video or phone calls. The measures were taken to mitigate the staggering toll of the coronavirus, which as of Monday had infected more than 15,000 residents in these facilities and killed 3,500.

But advocates, family members, and lawmakers have raised concerns about the lack of transparency and an inability to know what’s really happening inside these facilities.

“It’s safe to say that any of the complaints we’ve received is a significant undercount,” said Margaret Barajas, the state long-term-care ombudsman.

Similar complaints regarding stimulus checks have been reported in Iowa, Florida, and New Jersey, and the Federal Trade Commission on May 15 issued a national warning reminding facilities they cannot take the stimulus funds from residents.

Barajas expects the number of complaints in Pennsylvania to rise as stimulus checks continue being issued in the coming weeks. And with talk of a potential second round of checks later this year, her office is preparing to address concerns again.

They’ve sent postcards and fliers to inform residents of the stimulus checks and remind them of their rights. Local ombudsman programs are also working with facility administrators to clear up misunderstandings that can arise through the often-complicated accounting process.

The majority of nursing home residents in Pennsylvania rely on Medicaid to pay for their care, said Debra G. Speyer, a Philadelphia-area attorney who specializes in elder law and estate planning and administration. That means the state and federal government will pay for most of their care, but individuals are generally required to turn over all their income (typically pensions or Social Security) — minus a $45 personal allowance — to pay the nursing home each month.

Individuals in personal care homes and assisted living facilities who are using SSI, the Social Security supplement, to cover the cost of care are required to turn those funds over — minus an $85 personal allowance — to the facility.

Some care providers are mistakenly interpreting the stimulus funds as income and taking it as payment, Tenaglia said. But the federal government has been clear that these checks represent tax credits, and the state Department of Human Services issued guidance, too, clarifying that the funds are not to be considered income.

“A lot of it is misunderstanding, misinformation, and trying to make sure everyone is on the same page,” Tenaglia said. “It’s been a headache.”

The Pennsylvania Assisted Living Association, which represents more than 200 assisted living and personal care homes, said there was some confusion initially about whether federal stimulus checks were to be treated the same as the Pennsylvania rent rebate sent to residents. But since the state released new guidance on May 11, no association members have reported issues on this matter, executive director Margie Zelenak said.

The issue can be particularly acute in personal care homes, where many residents have memory impairments and there is less state and federal regulation than nursing homes, said Lori Walsh, long-term-care ombudsman supervisor at the Center for Advocacy for the Rights and Interests of the Elderly in Philadelphia.

Some residents may not even know to expect a stimulus check. Many don’t have access to a personal phone or TV. At some facilities, one resident used to share the newspaper with others, but that’s no longer possible with infection control protocols, Tenaglia said.

“They are at a severe disadvantage to staying up to date on what’s happening in the world,” she said.

That’s precisely why stimulus funds could be crucial, she added. With that money, a resident could purchase a phone or tablet to video chat with family members or get a cable subscription to watch the news. Many residents also need money for basics, like replacing broken glasses or dentures and buying new clothing.

“But if you don’t know that money exists or you’re eligible for it,” Tenaglia said, “you wouldn’t know to ask.” 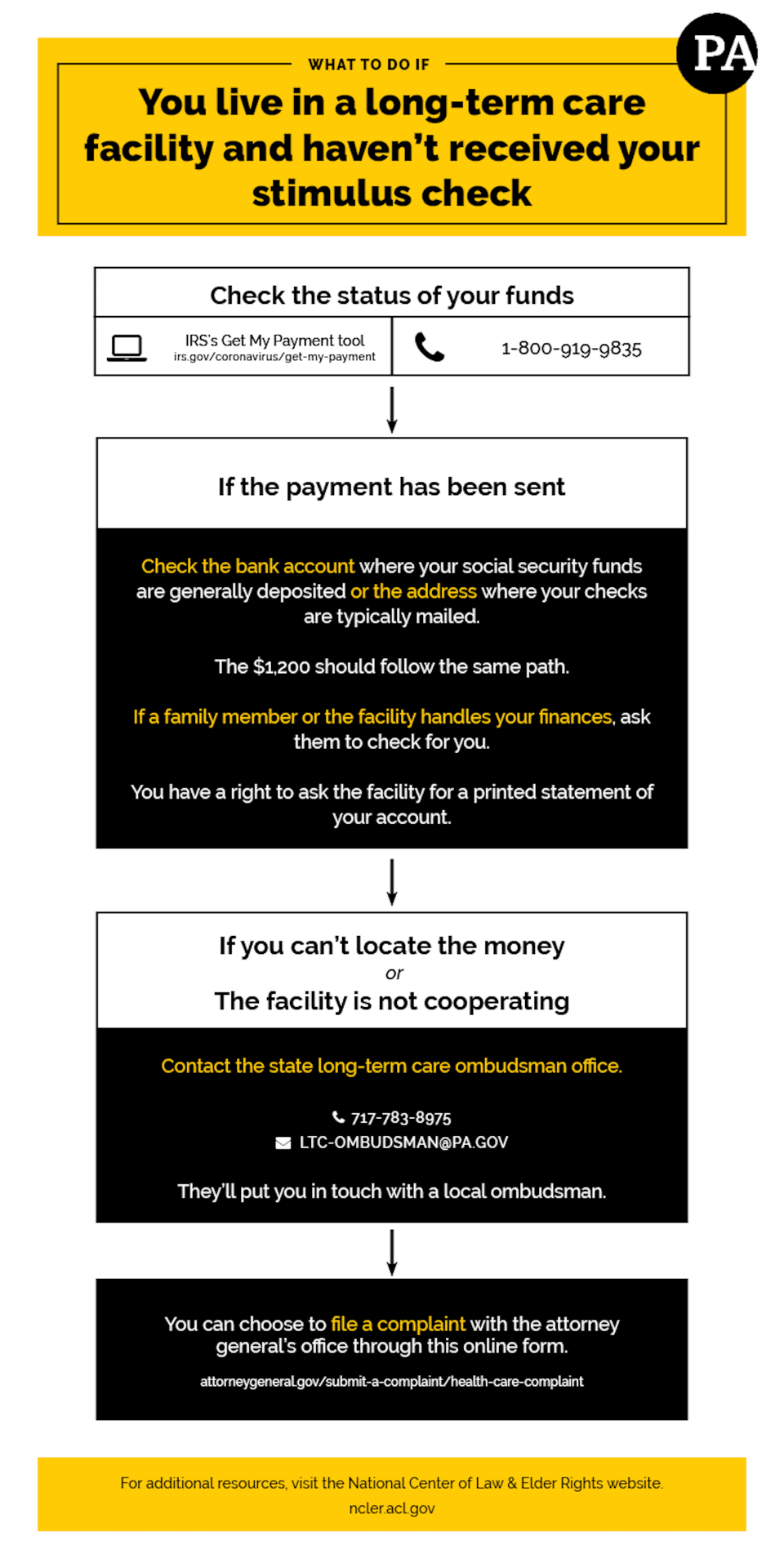 This graphic explains what long-term care residents should do if they haven’t received a stimulus check.

Plans to move Philly to ‘yellow’ forge ahead, despite risk of virus spread through gatherings