National Guard personnel return to their defensive position as protesters make room for them to fall back following a confrontation on East Lake Street, Friday, May 29, 2020, in St. Paul, Minn. Protests continued following the death of George Floyd, who died after being restrained by Minneapolis police officers on Memorial Day.

Some 2,500 soldiers and airmen were set to be deployed.

(Minneapolis, Minn,) — Faced with a fourth straight night of massive protests over the death of George Floyd, Minnesota on Friday deployed its largest law enforcement operation in state history, including more than 700 members of the National Guard.

“It was not enough,” Maj. Gen. Jon A. Jensen said Saturday.

Now, with a fifth night of protests looming, Jensen, head of the state’s National Guard, said authorities are drastically increasing the military presence in Minneapolis.

More than 1,000 additional Citizen-Soldiers and Airmen are activating today. This is in addition to the 700 that were on duty as of late last night. This represents the largest domestic deployment in the Minnesota’s National Guard’s 164-year history. pic.twitter.com/aV9NOFv5uo

Officials expected to deploy some 2,500 soldiers and airmen by midday Saturday and will soon mobilize the state’s full National Guard force of more than 13,000 — “an action that has never been taken in 164-year history of the Minnesota National Guard,” according to Gov. Tim Walz, who spoke at a joint news conference with Jensen.

“We understand the work that we need to do and the generational pain that went into what happened with George Floyd and that murder,” the governor said Saturday.

“But at this point in time, nothing we do to address those inequities, nothing we do to provide justice to George Floyd and his family that I spoke with last evening — none of those things matter to any of these people who are out there firing upon National Guard, burning businesses of our communities and making intent on disrupting any semblance of civil life.”

The Pentagon has also placed as many as 800 members of the military police on prepare-to-deploy orders, a U.S. official confirmed to NPR. The officers would be available to assist with logistics, analysis or surveillance if requested by the governor. 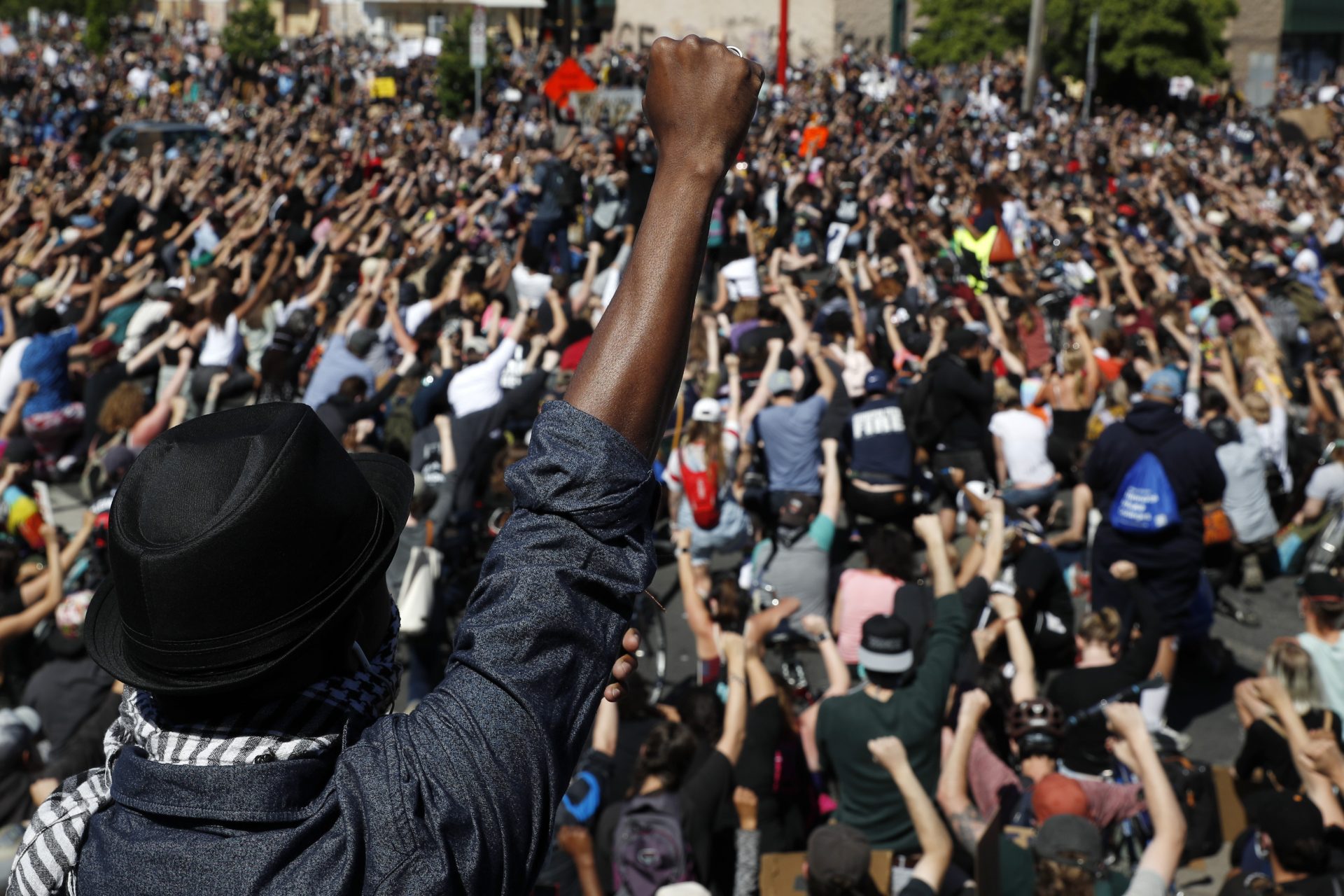 Less than a week has passed since Floyd’s death in police custody. The disturbing video of his arrest, filmed by a bystander Monday evening in Minneapolis, shows Officer Derek Chauvin with his knee on the neck of the handcuffed black man for more than seven minutes. The white police officer — who has since been fired and charged with murder — continues to plant his weight on Floyd well after his pleas for help give way to an unresponsive silence.

A federal investigation remains underway into the incident, with more charges possible for Chauvin and the three other officers seen in the video.

That has not satisfied protesters, whose furor over Floyd’s death has spread well beyond Minneapolis. A slew of cities — from Detroit to Atlanta, from Los Angeles to Washington, D.C. — have seen protesters gather to voice their outrage about police treatment of African Americans.

In many of those cities, gatherings turned violent, with some protesters clashing with police and damaging buildings. Law enforcement reported hundreds of arrests across the country and at least one death — a 19-year-old man who was killed when someone fired into a crowdin Detroit, according to local police.

Several people were also injured by gunfire Thursday night in Louisville, Ky., where crowds have gathered to protest a grievance closer to home: the death of Breonna Taylor, a 26-year-old black woman who was shot and killed by police in her own apartment earlier this year.

There were no incidents of gun violence linked to the protests Friday night in Louisville, but NPR member station WFPL reports that clashes erupted between protesters and police. Protesters shattered windows at the courthouse, and police fired tear gas to disperse the crowds, according to WFPL. 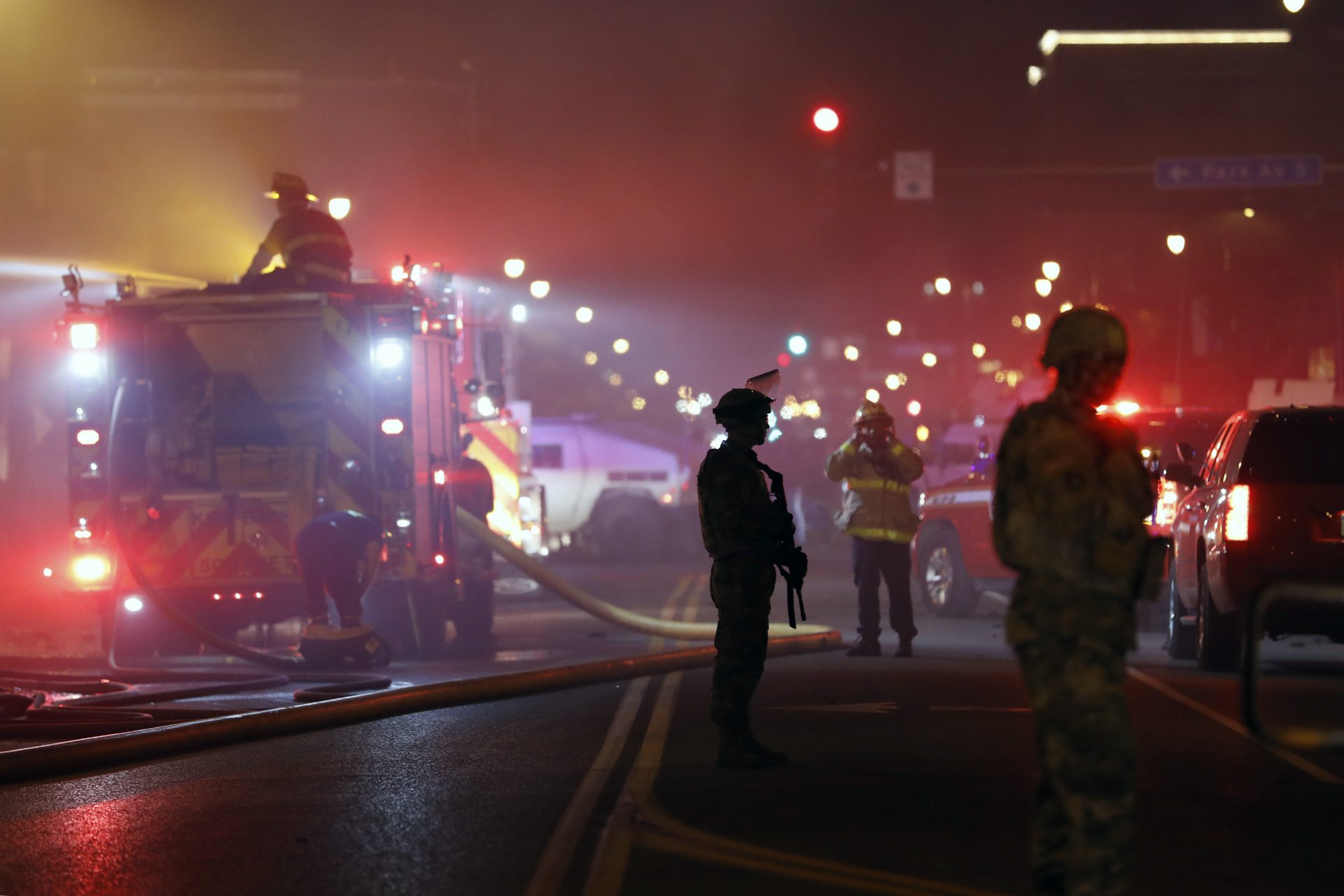 The National Guard standby as firefighters extinguish a blaze at a gas station Friday, May 29, 2020, in Minneapolis. Protests continued following the death of George Floyd, who died after being restrained by Minneapolis police officers on Memorial Day.

On Saturday, Kentucky Gov. Andy Beshear announced that he, too, was calling up the National Guard, in order “to help keep peace in Louisville.”

“I hope everybody knows this is a big step and a tough step, and it’s not one intended to silence any voice, because I want to hear,” Beshear said in a statement explaining the move. “But I want to make sure at the end of the day that we are all safe.”

President Trump weighed in on the protests Saturday. He said the best way to honor Floyd’s memory is for authorities to “get tougher” on the protesters who resort to violence, whom he called “radical left, bad people [who] have got to be taught that you can’t do this.”

In a statement Saturday, Attorney General William Barr echoed Trump’s comments, saying that though the outrage is “real and legitimate,” the protests are “being hijacked by violent radical elements.”

“Groups of outside radicals and agitators are exploiting the situation to pursue their own separate and violent agenda,” Barr said. “In many places, it appears the violence is planned, organized, and driven by anarchistic and far left extremists, using Antifa-like tactics, many of whom travel from out of state to promote the violence.”

SpaceX and NASA try once more to launch astronauts