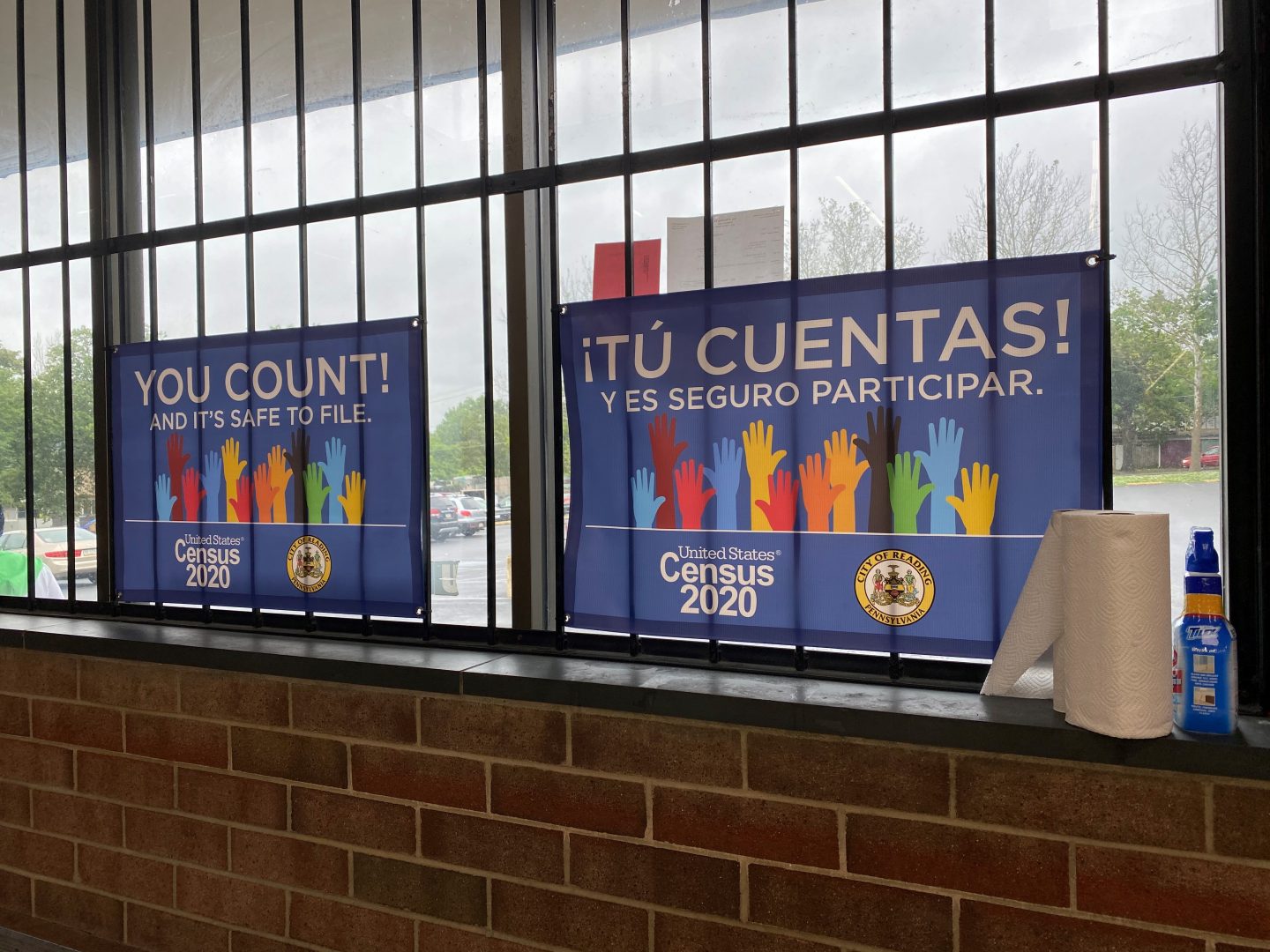 A digital map of Berks county shows a sea of blue municipalities — some townships show up as a deep navy, others a tropical azure.

In the center is an orange and tan island.

If this were a satellite view of a tropical paradise in the Caribbean, it might be calming. But it isn’t.

The map depicts HTC (Hard To Count) 2020 Census response rates, with bluer colors representing higher responses. The orange and tan island is the city of Reading, and for Berks County Complete Count Committee’s Isabel Monterrosa, that color is far from calming.

“It’s really disappointing,” Monterrosa, the committee’s volunteer and publicity coordinator, said. “There is a big push for everyone to put their masks on, I wish there was the same sort of push for people to complete their Census.”

There is a chain of these islands: The cities of Allentown, Reading, Lebanon, Lancaster and York.

The cities are somewhat comparable: Each is the urban center of their county. Each has higher rates of poverty, sizable Latino and immigrant populations, and they all have fewer people filling out the census than in their surrounding municipalities.

Monterrosa said Reading and Berks should be neck-and-neck with neighboring counties and cities when it comes to the percentage of households responding to the census. But big plans to contact residents in person didn’t happen, thanks to the coronavirus lockdown.

Making things harder is a lack of understanding of what the census does for communities, and less-than-enthusiastic promotion from community leaders, Monterrosa said..

The self-response rate isn’t a definitive measure of the census’s success or failure in any given locality. Rather, it shows the share of households that so far completed and returned their census forms, either by mail or online, according to the Census Bureau.

The federal government doesn’t rely solely on voluntary census responses. Every ten years, census workers spread out across every corner of the country to count those households that don’t respond to online or by-mail notices.

But with the coronavirus threat expected to continue into next year, door-to-door, in-person surveys may not capture as many of those households as in the past. Monterrosa also served as the Berks County Complete Count Committee’s volunteer and publicity co-coordinator in 2010. The coordinator she worked with that year was not Spanish-speaking or Latina.

Taking the lead role this year, Monterrosa was able to select her co-coordinator, Aidelsa Fernandez. Fernandez is also bilingual and bicultural.

The importance of social media has grown in the last 10 years and the Complete Count Committee has been posting information on Facebook and Instagram. Posts are informational and often highlight members of the committee but the posts have not gained the traction, Monterrosa would like.

One critical aspect of reaching the Latino population in Berks is understanding that Latinos are not a monolith, which Monterrosa said she and Fernandez are well aware of.

Messaging for Berks’ large Puerto Rican population is going to be inherently different from messaging for immigrants, Monterrosa said.

Monterrosa said some immigrant households are worried the census could be used to help deport undocumented immigrants, which is not the case. She also said transiency in the city, renters frequently moving around or in and out of Reading, is also a hurdle.

But the real obstacle, as with almost everything in the past few months, is the coronavirus.

During the pandemic, much of the messaging targeted on Reading and the Latino community has been on COVID-19 prevention and, more recently, mail-in voting. The census, though it may be mentioned at press conferences and on social media, gets a little lost, Monterrosa.

Berks’s Complete Count Committee planned numerous sites around the county where people could fill out census forms, frequently in town halls and libraries.

Libraries, for example, worked to include census lessons in their children’s education programs, recognizing that children are often the ambassadors of information to immigrant households, according to Monterrosa.

In-person gatherings were a major focus before the coronavirus outbreak. Officials from the Mexican consulate were scheduled to visit Centro Hispano Daniel Torres in Reading on March 21. Consular visits allow Mexicans living and working in the United States to take care of any official paperwork or other needs, and they were seen as a good way to reach potentially hundreds of Mexicans about the census. But the coronavirus shutdown canceled those plans.

During the shutdown though, Centro was able to help more than 500 people fill out their census forms during in-coming calls and also actively calling residents who have had previous contact with Centro, according to CEO Michael Toledo.

With in-person outreach on hold, census officials are putting $25,000 of advertising to work, including in the bilingual monthly Palo Magazine and on Spanish radio station La Mega 92.9 FM. Monterrosa said the county plans to spend a few thousand more in coming weeks.

Regional efforts to reach communities during the pandemic

Berks County’s census response rate trails many of its neighboring counties, which are currently above 70 percent, with the exception of Lebanon County (68.4 percent) and Schuylkill County (59 percent).

Census coordinators for Lancaster and Lehigh counties said they, like their counterparts in Berks, have had to make concerted efforts to engage their urban and Latino communities.

Milzy Carrasco, the Director of Neighborhood Engagement for the City of Lancaster and chair of the City Hard-to-Count subcommittee of the Complete Count Committee, said one of the biggest obstacles for her is overcoming some Latinos’ suspicion of the government.

“I’m Puerto Rican, so I can certainly remember individuals, numerators, coming to our door and my mom saying, ‘Don’t open the door, certainly don’t share any of our private information,’ Carrasco said. “So, there’s this hesitation, distrust.”

“We have a big population of immigants and folks who are undocumented as well, so just educating them that all these resources are for your kids for the streets, for our hospitals,” Carrasco said.

Lancaster schools have even given census-related assignments to students, according to Carrasco. This is something Monterrosa said was attempted in Reading, but never came together.

That’s something Monterrosa said she’d like to see more of in Reading.

“The people in this community are really looking to their leadership for guidance on whether this is a good thing to do,” Monterrosa said. “They need to be most assured that it is absolutely a good thing to do.”

Regionally, cities have been sending out information in the mail to local residents.

Emma Hamme, senior county-wide planner and census liaison for Lancaster, said her county has been sending materials directly to homes along with taxes. Likewise, Reading Area Water Authority has also sent census information in its bills. The Reading Recreation Commission has also been placing information in meals packages as part of food distribution.

Before the pandemic, Allentown had nearly 20  “Census Hubs” locations where people could come in and fill out the form, Gilfoil said. These locations were spread throughout the city at youth centers, catholic churches and CASA Guadalupe, a Latino-focused nonprofit.

In Reading, the census committee has been connecting with houses of worship, senior living centers and social clubs to catch people who may fall between the cracks. From the HTC 2020 website, produced by CUNY Mapping Service.

The Lehigh Valley Community Foundation helped obtain $25,000 in state grant funds for Lehigh County and Northampton County to place ads on social media and national television network channels. The ads target Latinos and African Americans in the counties, according to Gilfoil.

“The mantra is: It’s safe, it’s confidential, it’s only nine questions and this year it can be done online,’” Gilfoil said. “How much easier could it be?”

Buses in the county will also soon carry ads in Spanish and English promoting the census, Gilfoil said.

But Monterrosa said ads and announcements in Spanish are only so effective.

On the ground in Reading

Arroyo, 29, and his partner, Xiomara, 26, live in one of the most undercounted census tracts in downtown Reading.

“I don’t really care about it,” Arroyo, a truck dispatcher, said about the census. “I work too much to bother with it.”

Xiomara asked why Mexicans would fill out the form and let the government know many of them are living in a house, potentially many more than the city allows.

When informed about the federal funding and benefits census information can bring to a city with high poverty, Arroyo was still not interested.

“I work already, so I’m not worried about money,” Arroyo said.

Looking to the future of Reading, Arroyo shared no hopes for the city. He and Xiomara said they are planning on moving to his hometown of Fort Worth, Texas, in the next year.

He said from what he’s seen from his friends and community, people are more interested in a possible second round of stimulus money than the census.

Last week, volunteers handed out more than 400 masks to neighbors in Reading. The group, South of Penn taskforce, focuses on development in south Reading. “I was telling people it is a quick questionnaire and that all it takes is one person in a household filling it out is all it takes,” Veloz said. “Outside of that, I talked about how it helps direct government money to different services we use as a community.”

While the interactions were generally positive, Veloz said there was little if any excitement around it.

“Unfortunately due to social distancing, my interactions with the public has decreased, but I have definitely noticed disinterest,” Veloz said.

Patricia Vasquez wears a number of different hats. She is a member of the Complete County Committee, the community development coordinator in Reading City Hall and she is a trustee of the Dominican Association of Pennsylvania.

The banners, in Spanish, say, “You count! And it’s safe to participate.”

She said a woman in her late 20s or early 30s approached her and asked what the census was.

In that moment she saw that the outreach can be strategically placed, but without interpersonal connection it can be hard for people to buy in.

“We knew with the Spanish population we would have to be a little more personable because Latinos tend to be more personable,” Vasquez said. “They like word of mouth, they like things to be explained to them in person but we’ve been limited to the number of things we’re able to do in that respect.”