The Spectrum Center in downtown Charlotte, N.C., is the site of the Republican National Convention in 2020.

Two new polls out this week indicate a majority of Americans fear a “second wave” of COVID-19 cases in the near future, which may be washing away the chances for traditional presidential nominating conventions this year.

A recent NPR/PBS/Marist poll found 77% of Americans were very concerned or concerned about a second wave of coronavirus. The next day, the Associated Press and NORC for Public Affairs Research reported 54% of Americans “very or extremely concerned” that lifting restrictions will result in new infections (with nearly another 30% somewhat concerned).

Federal health officials including renowned infectious disease expert Dr. Anthony Fauci have warned a resurgence of the virus is likely in the months ahead, possibly coinciding with flu season in the fall. It might also come earlier if the reopening of business reverses the current downward trend in new COVID-19 cases.

So at this point it is hard for convention planners to know whether the last two weeks in August would bring relative calm or a rerun of the outbreaks from March and April. And that has people wondering in the convention host cities of Milwaukee and Charlotte. As much as they wanted to host these events, is the price too high in terms of local residents’ exposure? 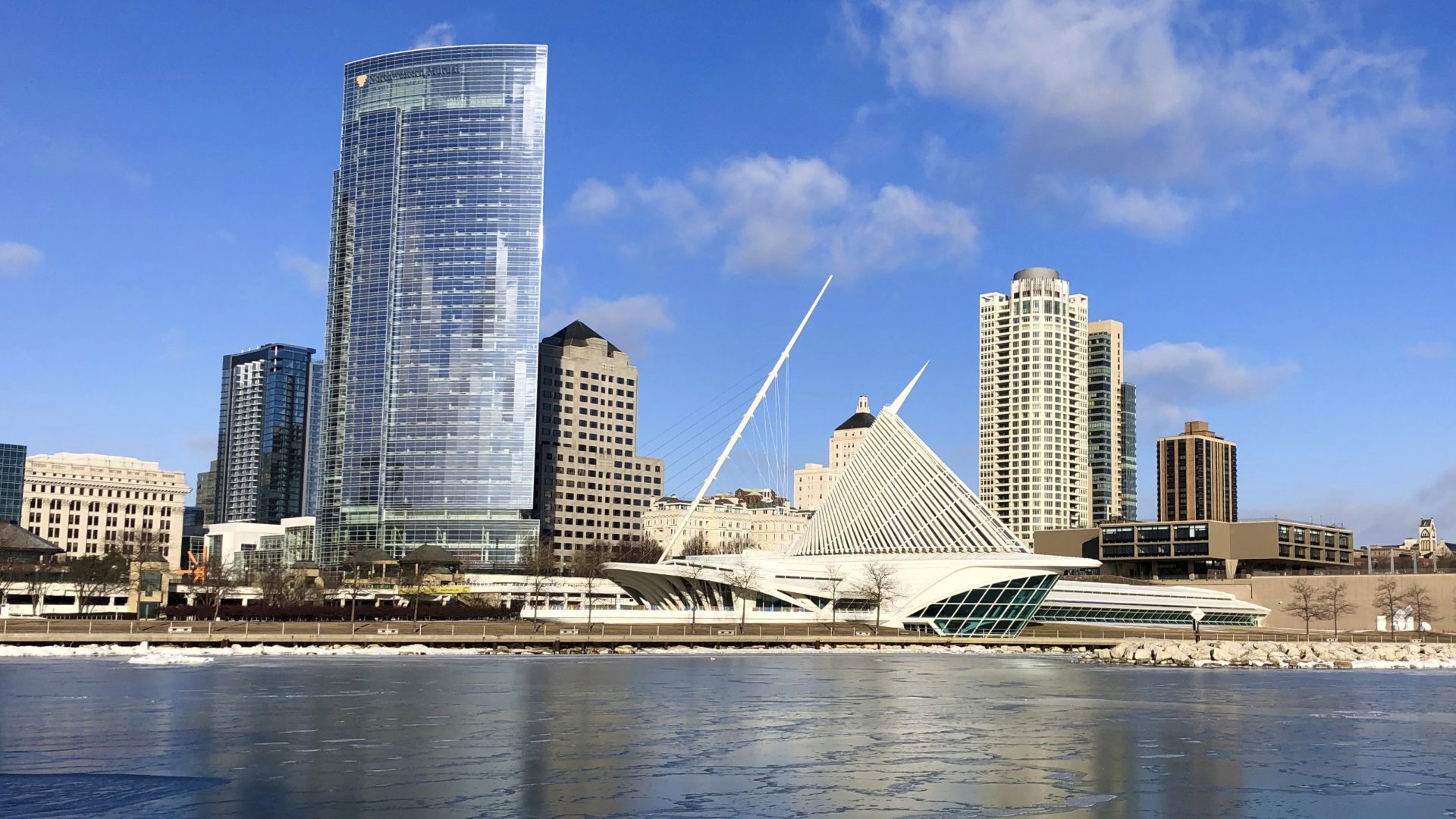 Milwaukee was to host the Democratic convention in mid-July but the party’s national committee agreed to postpone until the week of August 17. That is the week before the Republicans are slated to gather in Charlotte.

“We don’t know yet what the new normal will be at the end of August,” notes Harvey Gantt, the prominent Charlotte architect who served two terms as its first African American mayor in the 1980s.

“I’m not expecting the mayor or the city council to rescind the decision to host, not sure that’s even an option,” Gantt said. “But if a hurricane blew through here the week before, I think you’d see some reconsideration, and if people are contracting and dying from COVID-19 it makes no sense to go forward.”

The 2016 national nominating conventions in Cleveland and Philadelphia each drew an estimated 50,000 people – nearly a third of them media personnel. Day and night for a week, throngs pulsed through sports arena hallways, hotel lobbies, meeting rooms and bars. It was great for the local economies, bringing in $180 million to each host city according to the U.S. Travel Association and supporting thousands of jobs – at least temporarily.

Those dollars and jobs could scarcely be more welcome in any American city than they would be this summer. But it’s also hard to imagine a more effective way to spread the virus, endangering not only the conventioneers but also the thousands of workers employed to set up, serve food and drinks and clean up. For the workers, the choice would be between their health and their job.

“If 50,000 people come here they are going to have a disparate impact on this community and we will be left to pick up the pieces,” says Mark Jerrell, an African American man serving in his first term on the Mecklenburg County Board of Commissioners. “So if you are talking about $10 million in county revenue from taxes, what about the $20 million in medical bills we get as a result?”

Jerrell’s district on the County Board is, by his description, “one third African Americans, one third Caucasian and one third Hispanic, Asian or other.” He makes it clear he thinks the area’s people of color would be vulnerable.

“There’s no question some of our people are at a higher level of risk because of their lack of health care and the nature of the work they do,” Jerrell said. “We’ve already seen a disproportionate share of the cases of COVID here in [Mecklenburg] County are people of color.”

Gantt made a similar point with respect to the convention and the virus.

“Ultimately the people running the convention itself have to be concerned about keeping their own people safe and seeing what precautions they need to take so that their delegates want to attend,” said Gantt.

But he added their responsibilities also extended to the thousands of Charlotteans who would be servicing the convention and related events.

“They have to take care of our people, too. The onus will be on them to see that the people working that convention are safe.”

Pointed questions were being asked weeks ago at town halls and in social media in Milwaukee, too.

“At first a lot of local folks were really excited to have the convention here, to show off our city, our small businesses and black owned businesses,” says Angela Lang, executive director of Black Leaders Organizing for Communities in Milwaukee. “We also saw it as a chance to talk about the challenges here, especially in terms of black folks.”

Lang’s organization was even helping recruit volunteers to work on the convention when the COVID-19 crisis hit and perspectives changed.

“At the end of the day we have to be sure people are safe,” she said. “And when you look around you see the people who still have to go to work. Not only health workers but grocery store workers, truck drivers. One thing really clear in this pandemic is the class aspect to who’s at risk. And when you paint the picture a lot of these people are black and brown.” 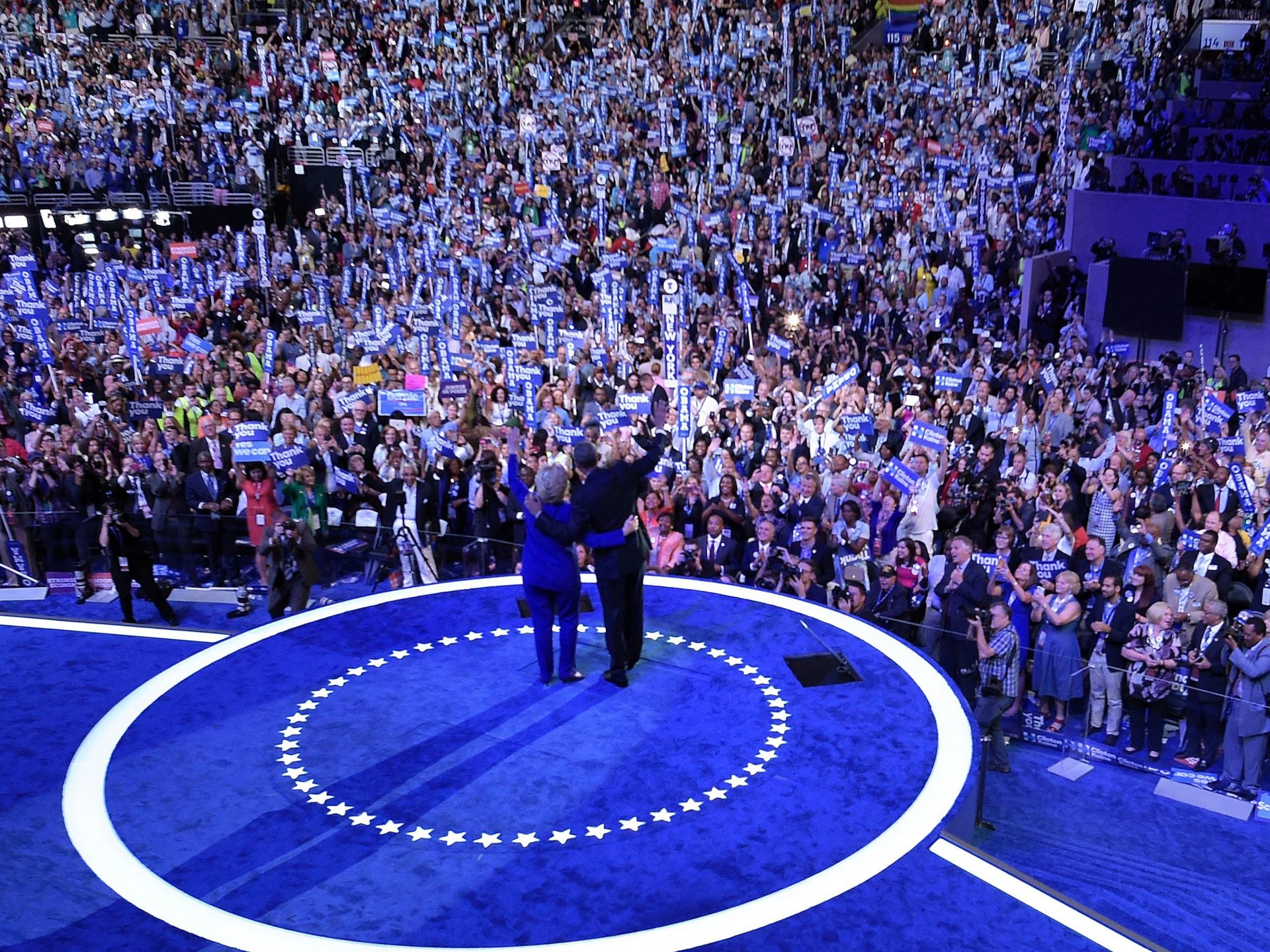 Hillary Clinton embraces President Obama after his address to the Democratic National Convention in Philadelphia in 2016.

To date, the official responses of the two parties have been so divergent that the two symbols are inadvertently made symbols of the country’s political divide.

The Democratic National Committee is voting (by mail) on a proposal to leave final decisions about the convention to a state and local team of health and elected officials. But Wisconsin Gov. Tony Evers, a Democrat, has said he expects the convention to move toward an essentially virtual mode. And the presumed nominee of the convention, former Vice President Joe Biden, has said he is fine with that or with a hybrid of in-person and virtual.

Polling has shown Democrats in general are more supportive of stay-at-home orders of all kinds, and a New York Times canvass of Democratic delegates entitled to vote at the convention found most would prefer not to hazard a face-to-face confab this year. So, while Milwaukee has waited a long time for its first national major party nominating convention, it may just have to wait longer.

The sentiment has been quite different on the Republican side, where polls and YouTube videos show active resistance to stay-at-home orders. The president has often reiterated his support for a traditional convention, and as recently as last week, officials for the convention and for the Republican National Committee reiterated they were moving “full speed ahead.”

That may be the GOP’s final word, or it may be bravado or even a negotiating position. The New York Times reported online Thursday that President Trump might not be as adamant about the Charlotte convention as has been assumed, citing unnamed aides suggesting the president had spoken of scaling back – or even moving the convention to Florida.

More likely than that would be a graduated compromise, possibly with a fraction of the human footprint.

“People keep talking about 50,000,” said Gantt. “We don’t know that it will be that many, it may wind up being two or three thousand. Or maybe 21,000 spaced out in a very large facility.”

That was very much like the solution proposed for the Democrats by Speaker Nancy Pelosi, who envisioned a ballpark with delegates six feet apart.

Moving out of Charlotte would seem the least likely scenario at this point. But it would surely flip the script on some in Charlotte who have noted the city has a contract with the Republicans that allows few exit ramps, if any. That contract was cited when, in 2019, some members of the City Council wanted to have a do-over vote on hosting the RNC. (The first was in 2018, and the tally was 6-5 in favor.)

The do-over discussion followed a fiery rally President Trump had held halfway across the state in Greenville, N.C., criticizing Rep. Ilhan Omar, D-Minn., and other women of color just elected to Congress. The crowd was seen national TV chanting “send her back.”

One Charlotte city councilman, Braxton Winston, referred at that time to Trump as “an avatar of white supremacy.” But the full council adjourned without reconsidering the vote it had taken the previous year.

Widely separated by geography and history, the two cities nonetheless share notable characteristics. The growing city of Charlotte is nearing 900,000 people and the surrounding Mecklenburg County adds another 200,000. The City of Milwaukee has fewer than 600,000 and its suburbs within Milwaukee County add another 350,000 (and still more in the counties beyond). In both cases, the core city has become increasingly African American and Hispanic as white residents over the past few generations decamped to the suburbs. Charlotte proper was 35% African American and 14% Hispanic in the latest Census estimate. The comparable numbers in Milwaukee today are 40% and 17%.

Both cities have long histories of racially segregated neighborhoods, civil rights struggles and battles over the schools. In 2016, both cities saw violent street confrontations after the shooting deaths of young black men by police officers. In Charlotte, six young men of color had been fatally shot, all but one by a white officer, in a six month period.

But both cities have also seen their political leadership undergo a transformation. Since Gantt in the 1980s, Charlotte has become accustomed to having black mayors, including Anthony Foxx, who was later the U.S. secretary of transportation under President Obama. Vi Lyles, the current mayor, is the first black woman to hold the office. The Charlotte City Council has a black majority, as does the Mecklenburg County Board of Commissioners.

Milwaukee’s population is actually more non-Anglo by percentage than Charlotte, although it has not yet elected a black mayor. State Sen. Lena Taylor, an African American woman ran a strong second in the most recent mayoral race, losing to 16-year incumbent Tom Barrett (who was first elected over an African American alderman who was serving as acting mayor at the time).

In April of this year, state Rep. David Crowley became the first African American elected as Milwaukee County Executive (a post once held by Scott Walker, who would later serve two terms as governor). And while the city’s Common Council is divided almost equally between white and black aldermen (with two Hispanics), it has had several black council presidents, including the current president Cavalier “Chevy” Johnson.

Race may have been at least a subtle subtext of the choice of Milwaukee and Wisconsin to host the convention in 2020. While many factors contributed to Hillary Clinton’s loss in the state in 2016, one was a sharp drop in voting in Milwaukee’s black community. Some estimates have shown African American voting rates in the state down by nearly a fifth. About 7 out of 10 African Americans in the state live in Milwaukee, where turnout in the city proper dropped 11 percentage points from President Obama’s last campaign in 2012.

It should be noted that elsewhere in the state 18 less populous counties that had voted twice for Obama switched to Trump in 2016. But the falloff in the Democratic tally in Milwaukee was more than enough to account for Clinton’s 22,000 vote loss statewide. It was the first time a Democratic presidential candidate had failed to carry Wisconsin since 1984.

After months of steep declines, air traffic is picking up