Lebanon County commissioners met on Friday, May 15, in a video meeting.

Defying Wolf, Lebanon County commissioners vote to move from red to yellow on their own but offer warnings to businesses 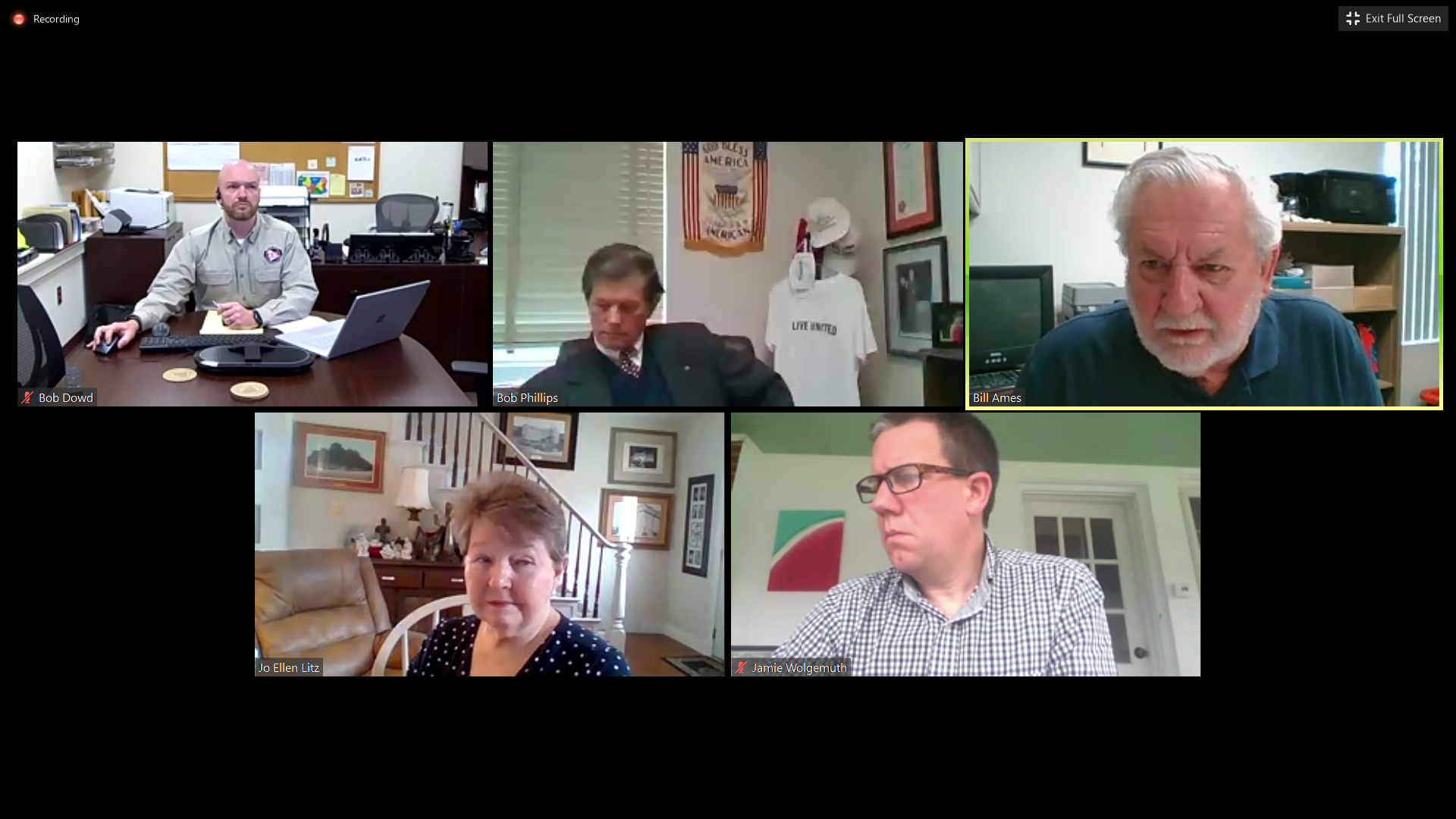 Lebanon County commissioners met on Friday, May 15, in a video meeting.

The two Republicans on Lebanon County’s three-member board voted in favor of a resolution declaring that the county’s public and private sectors are moving to the yellow phase, but they warned that businesses that do the same could face civil and state penalties.

The resolution was narrowly tailored — much more so than the letter that several Republican elected officials in the county sent to Democratic Gov. Tom Wolf on May 8.

The resolution was binding only for county government offices, but it appeared to have symbolic power for multiple members of the public who participated in the board meeting via video who saw the action as a referendum on whether commissioners endorsed businesses reopening.

“This is a personal decision for everyone,” said Commissioner Bob Phillips, a Republican. “But at least it gives people the idea, that, ‘Hey, you know, we’re getting our rights back.’”

The other Republican on the board, Commissioner Bill Ames, also voted in favor.

“I want to be able to encourage folks to act, according to the rights that they have, but on the other hand, I don’t want them to be lulled into a sense of security that the county is saying that we’re going to support them legally,” Ames said.

“I really beg you to reconsider this move at this time,” she said, noting that some other counties backed off plans to move to yellow after warnings from the governor. “It’s not worth the risk.”

During the meeting, state Sen. Dave Arnold, R-Lebanon, urged commissioners to make the language in the resolution stronger.

Commissioners did change the resolution, adding that the switch from red to yellow applied to the county and businesses in it.

Still, it wasn’t binding on businesses, and the resolution said “it is incumbent upon those businesses to know the risks, especially if subject to state regulation or licensure … .”

Over the past two weeks, Gov. Tom Wolf (D) has eased restrictions in 37 out of 67 counties, moving them from what his administration calls a “yellow phase.”  He is expected to announce today that 12 more counties will have restrictions eased starting May 22, including York, Adams and a few others in south-central Pennsylvania.

In counties that move to yellow, citizens are still encouraged to practice social distancing and refrain from large gatherings. Businesses can reopen, but must put in place policies and procedures for social distancing. Restaurants and bars, however, are still limited to curbside or delivery service.

The number of new coronavirus cases in Lebanon County is still higher than a benchmark Wolf and the state health department established that says counties should have fewer than 50 cases per 100,000 residents over 14 days before moving to yellow.

The governor has met increasing resistance from county leaders, and on Monday he warned that communities could lose federal and state money if their elected leaders encourage reopening without state approval. He said those businesses could also lose state licenses and insurance coverage.

County commissioners in Beaver County in southwestern Pennsylvania, and two Republican commissioners in Lancaster County, also encouraged businesses to operate as if they were in the yellow phase of the governor’s restrictions. But they didn’t pass formal resolutions. District attorneys in those counties say they won’t prosecute businesses for alleged violations.

York County’s district attorney says he won’t prosecute businesses that violate the governor’s orders, but commissioners there have not said they will act unilaterally to move the county to yellow.

In Dauphin County, the district attorney’s office said it would only prosecute  “in extraordinary circumstances.” Republican commissioners backed off plans to move to red to yellow.

Gov. Wolf was not expected Friday to announce an easing of restrictions for Lebanon, Lancaster or Dauphin counties.