Engineers work on a potential vaccine for the coronavirus at a Beijing lab.

When can we expect a coronavirus vaccine?

So far, it does seem like the vaccine will be developed faster than ever before in vaccine history.

(Washington) — Most health experts agree the need for a vaccine to prevent COVID-19 is clear.

“To return to a semblance of previous normality, the development of SARS-CoV-2 vaccines is an absolute necessity,” is how a perspective in Science magazine puts it.

So it’s hardly surprising that around the world, anticipation for a coronavirus vaccine is high. With more than 100 vaccines under development, researchers are reasonably confident at least one will be successful. Skeptics, and there are some, remind us that optimism about an AIDS vaccine was once high, and 40 years later there is no vaccine.

Still, even if experts today are right that a vaccine for COVID-19 will be easier to develop than an AIDS vaccine, estimates for when it will be widely available vary. Here are some of the vaccine-related questions being raised — and what we know at this point.

Is the timeline for COVID-19 faster than for other vaccines in the past?

President Trump has offered perhaps the most optimistic estimate. He said he expects the U.S. to have a vaccine by the end of 2020.

So far, it does seem like the vaccine will be developed faster than ever before in vaccine history. It took more than two decades to come up with a successful polio vaccine. Federal health officials suggest a COVID-19 vaccine may be ready in a tenth of that time.

But there are only some things that you can fast track, and others, not so much. And even though the Food and Drug Administration is going to be evaluating the various stages of testing with great speed in this case, certain standards must be met: First, you have to prove a vaccine is safe. Then you need to prove it generates the immune response you want. And then you need to find out if it actually prevents people from getting sick if they’re exposed to the virus.

How would they know if they have developed a vaccine that works?

The way you know that the vaccine is effective is that you give a vaccine to one group of people and another group get a sham injection that doesn’t contain the vaccine being tested. Then you see if the vaccinated group is protected.

So how are they going to get exposed to, in this case, the novel coronavirus? Well, if there’s a lot of virus circulating in the population, that’s one way.

Another possible way that people have talked about is intentionally infecting volunteers with the virus and then seeing if a candidate vaccine prevents them from getting sick. That way you know for sure that the volunteer testers have been exposed, and be confident the vaccine works if that person does not get sick. Such studies, known as challenge trials, are ethically fraught, since you are deliberately infecting volunteers with a potentially lethal virus for which there is no cure.

The alternative to challenge trials is to vaccinate enough people so that you can be confident that some fraction of them will be exposed to the virus. The number you need to vaccinate depends on how prevalent the coronavirus is in the area where the vaccine is being tested. You then compare the vaccinated group with another group that received a sham vaccine to look for efficacy. 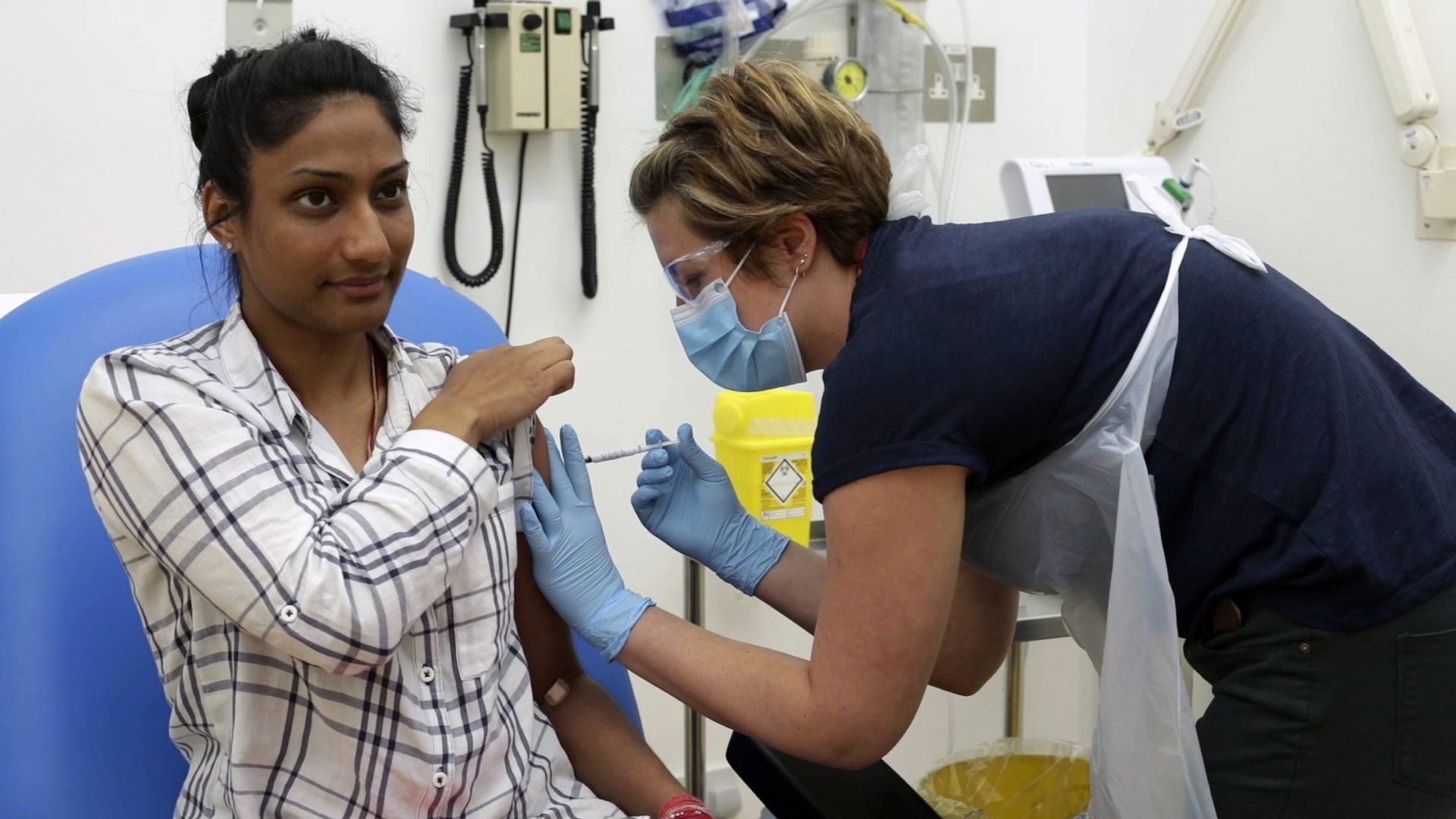 In this screen grab from video issued by Britain’s Oxford University, a volunteer is injected with either an experimental COVID-19 vaccine or a comparison shot as part of the first human trials in the U.K. to test a potential vaccine, led by Oxford University in England on April 25, 2020. About 100 research groups around the world are pursuing vaccines against the coronavirus, with nearly a dozen in early stages of human trials or poised to start.

Once a vaccine has been developed, how does the manufacturing process work?

“The requirement to scale up to the kinds of numbers we’re talking about within the short time-frame that we’re speaking about would be an extraordinary effort,” says Emilio Emini, who’s been working on vaccines for decades and now leads the HIV program at the Bill & Melinda Gates Foundation (which is a funder of NPR and of this blog).

Making billions of doses of vaccine is a herculean task.

The tools that you need for manufacturing one vary considerably depending on the kind of vaccine you’re making, but in many cases, you need something called a bioreactor — a giant tank that allows the organisms that are actually spewing out the vaccine of interest to grow.

Sometimes you could be talking about a 20,000-gallon bioreactor, and you’re not going to go down to your local hardware store and pick one of those up. So that’s one issue. There’s specialty equipment that has to be made.

In addition to the big stuff, there are smaller things to take into consideration, like medical grade glass.

“You have to put a product into a sterile vial or syringe, and there’s only so much of that glass to go around,” says Fred Porter, senior vice president for technical operations at Adrenas Therapeutics. “If we’re thinking about billions of doses to be able to deliver vaccines around the world, that becomes a significant bottleneck.”

Seth Berkley, CEO of an organization called Gavi, the Vaccine Alliance, believes you can’t roll out a vaccine one country at a time.

“We’re not going to be safe as a world unless everywhere is safe,” he says. “So even if we had parts of the world that would have low spread or no spread, if you had large reservoirs of the virus in other places, of course you have a risk of reintroduction.”

With more than 100 vaccines in development around the world, is it safe to say the majority of them are never going to become viable candidates?

They may not succeed for a variety of different reasons. They may not work, or they work but be too hard to manufacture. At this stage of development, many are expected to fail. That’s just the nature of vaccine trials.

Is it possible that we don’t just get one vaccine but that multiple vaccines are developed that might work even in somewhat different ways?

It seems likely because there are multiple approaches to making vaccines that have advantages and disadvantages. Some are tried and true and have worked for other viral illnesses. Some you can make much faster, but it’s unclear that they’ll be as effective. Experts like Emilio Emini believe the parallel developments of multiple vaccines is a good thing.

Unfortunately right now, the answer is unclear. There is some indication that this virus doesn’t change very rapidly, so if you find a vaccine that works against it, it may work in perpetuity. But researchers also don’t know how long immunity to this virus lasts, so we may need to get booster shots — not a different shot every year but a booster of the same shot to make the vaccine actually work for multiple years.

How hopeful should we be that there will be a vaccine that works and that we can get our hands on by next year?

Several companies, governments and foundations are betting billions of dollars that it will be possible.

“We have done it with up Zika, RSV (Respiratory Syncytial Virus), Ebola.” he says. We know what we do. And if we plug a new virus into that system, we are pretty sure we can get to a vaccine.”

That said, vaccine people will tell you that every time you start working on a vaccine for a new virus, you don’t know what the hurdles are that you’re going to have to overcome. So obviously there’s a lot of work that needs to be done before we know for sure whether those bets will pay off.