A woman shops at Aldi in Ross Township. The shop has installed health and safety measures, including stickers on the floor illustrating six feet and mask requirements.

May 9, 2020 | 8:36 AM
With our coronavirus coverage, our goal is to equip you with the information you need. Rather than chase every update, we’ll try to keep things in context and focus on helping you make decisions. See all of our stories here.

As 13 western Pennsylvania counties prepare to move into Gov. Tom Wolf’s yellow phase of reopening May 15, local businesses and officials are cautiously optimistic.

Allegheny County Executive Rich Fitzgerald called the change a “big day” and said he’s glad the state will ease certain restrictions, but understands that some parts of managing the pandemic will get harder.

“There are things now that will make it more challenging than it was when most of us were at home, as people leave their homes more often, to go to more workplaces, to go to retails, to go to all the things that opened up,” Fitzgerald said.

He said the county will urge employers to stagger work schedules, and take other steps to limit the spread of the virus. Downtown Pittsburgh is an area of concern, Fitzgerald said, because of the volume of workers who travel there each day. 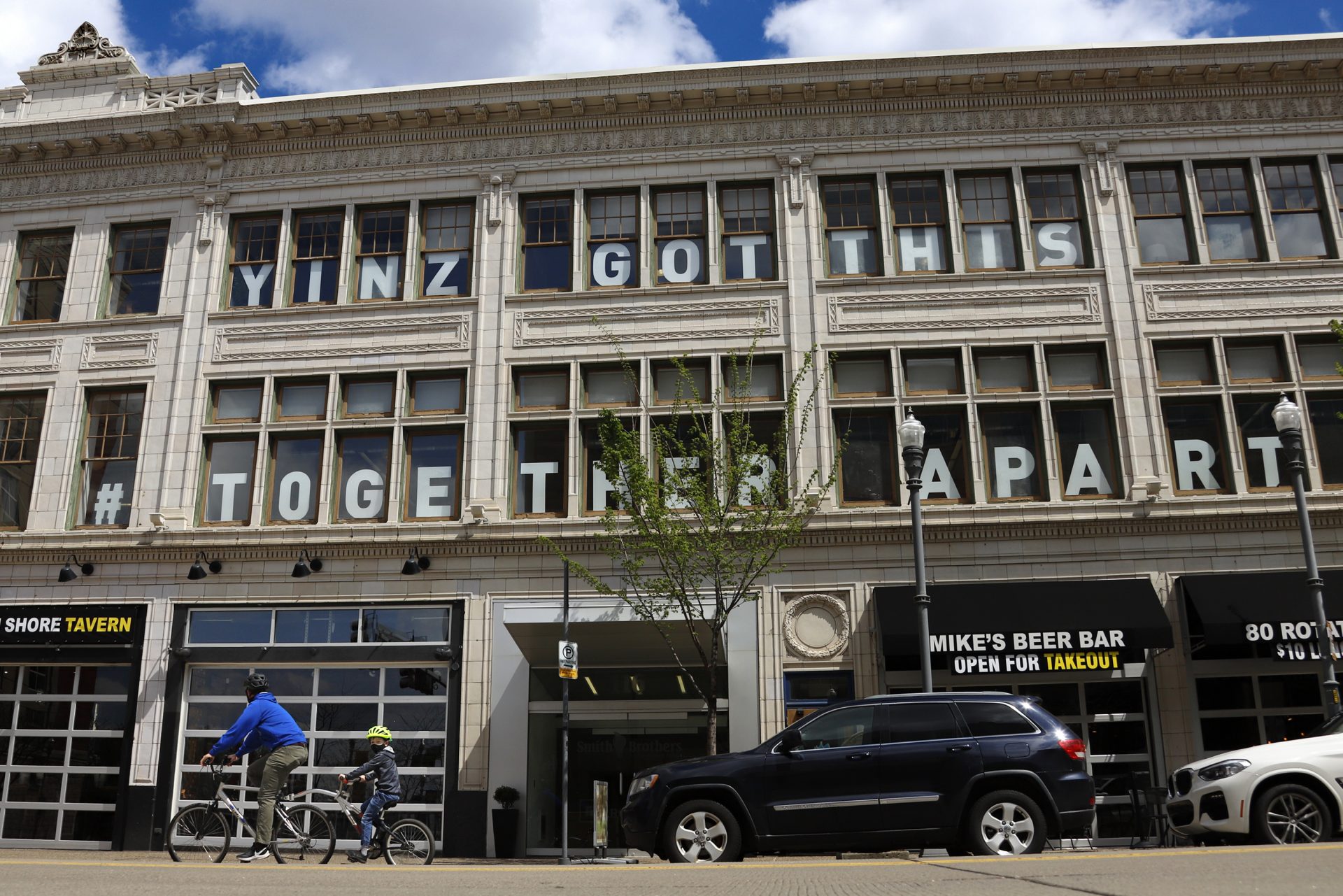 A father and son ride their bikes past a building on the Northside of Pittsburgh that sports a sign of encouragement for the efforts being made to mitigate the spread of COVID-19, Wednesday, April 15, 2020.

Shops ready for adjustments, glad to be open

Business owners in the region, meanwhile, are eager to reopen their doors next week, even in a limited capacity. Laura Knopf, with Serenity Bead shop in Greensburg, Westmoreland County, said it’s been a challenge to pay bills during the shutdown. Her store relies heavily on customers coming in to take a class or see the beads and she said it’s just not the same shopping online.

“There’s a lot of people who need a specific color or shape and online monitors on your computer, they don’t match reality,” Knopf said.

She was able to sell some products online and received a Small Business Loan, but said because many of Greensburg’s downtown cultural events were canceled, she might struggle throughout the summer. Still, she’s optimistic she can start to hold some instructional sessions.

“My classes will be suffering, yeah, but I have enough space where I can separate everybody to their own table,” Knopf said. “So I could do three or four with six feet distance, if I have to.”

In Millvale, Attic Records employee Tony Theil said the store has increased its online presence (he even made the shop an Instagram account) and is concerned with the safety of workers and customers as the region enters the next phase of reopening.

“I think the first step is to open up on an appointment basis,” Theil said. “And then, and it’s not fully fleshed out, maybe we’ll say four or five customers at a time.”

During the shutdown, Theil said employees had trouble finding rubbing alcohol, which they use in combination with water to clean their records.

“So we’ve had to make a new formula,” Theil said.

Officials in Beaver County, the only western Pennsylvania county not included in the governor’s announcement, aren’t thrilled about the exclusion. Board of Commissioners Chair Daniel C. Camp III accused Gov. Tom Wolf of “double talk,” saying business owners and residents “cannot become prisoners in our own county.”

The county was left out, according to the state, because it is home to Brighton Rehab, a nursing home hit particularly hard by the COVID-19 outbreak.

Local police have been advised to use “discretion” about going after businesses who don’t follow red-phase protocols, said Beaver County District Attorney David Lozier, adding that he found the shutdown order “arbitrary and capricious.”