From conference calls to Zoom, local governments employ range of approaches to public meetings during pandemic

Digital divide remains a major challenge in some parts of Pennsylvania 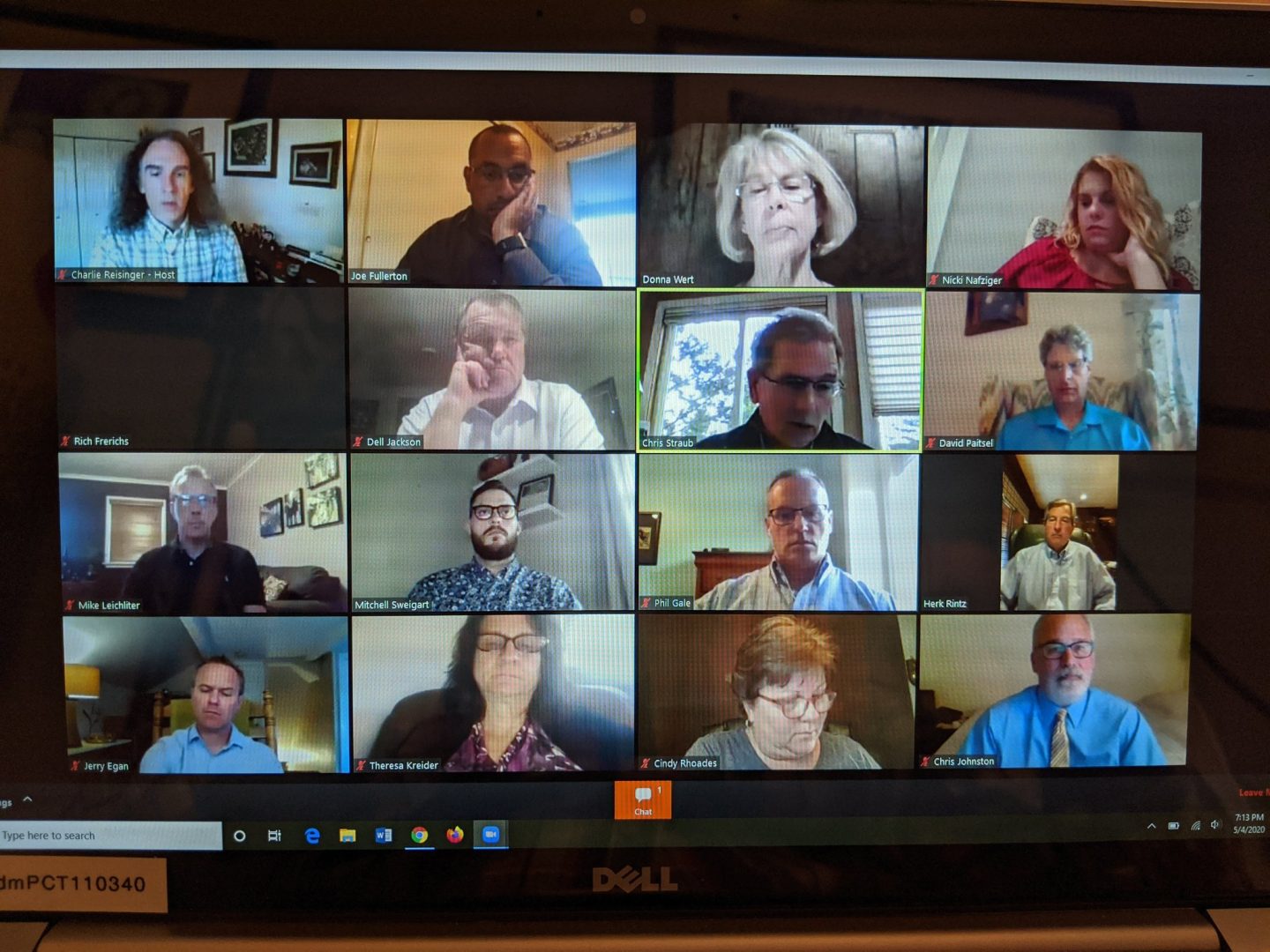 When the Penn Manor School Board held its first remote meeting via the video conferencing platform Zoom, remote hijackers “Zoom bombed” the affair, turning on their microphones and disrupting the board for a few minutes before they were removed.

“It was very dramatic for about two minutes,” said Charlie Reisinger, the district’s director of technology.

That night in April marked a rocky introduction to the world of virtual meetings for the Lancaster County school district. A month later, however, Reisinger says remote meetings are running smoothly.

The original disruption happened because the district was using a free version of Zoom. Now, thanks to a subscription provided by the Pennsylvania School Boards Association, Penn Manor and other member school districts have access to a licensed account that allows the district to use the webinar feature to limit webcam and microphone access to board members and school district staff while allowing the public to participate via a chat feature.

“We have conducted two meetings since that time with no issue,” said Penn Manor Superintendent Mike Leichliter.

At the other end of the spectrum, particularly in parts of the state’s northern tier, approaches that do not require the internet are more common. A search of classified ads over the past month in Endeavor News, which covers Potter and Cameron counties, shows that some municipalities, like Pike Township in Potter County, which has a population of about 300, are holding their meetings in person while discouraging residents from attending to keep with social distancing guidelines. Others, like Keating Township, also in Potter County, are using a telephone conference call system and inviting comments to be submitted via a physical drop box or via email.

“There are a number of townships where videoconferencing in particular may not be a possibility because either there is no internet available or it is slow, not broadband,” said Holly Fishel, policy and research director with the Pennsylvania State Association of Township Supervisors. “We’ve encouraged our members to be creative and focus on making sure that they are being transparent by providing means to listen to meetings and providing for public participation.”

Even if a municipality has the technology to stream its meetings, residents may not have the computer technology or internet connectivity to participate. A 2019 report commissioned by the Center for Rural Pennsylvania found that aside from a few clusters in and around Philadelphia and Pittsburgh, “almost no areas of the state qualified as having median speeds that met the FCC’s definition for broadband.”

“The fact is … that there is a significant digital divide where many Pennsylvanians cannot access remote meetings, mainly due to lack of technology,” said Melissa Melewsky, media law counsel at the Pennsylvania NewsMedia Association. “Remote meetings are a short-term means to keep government transparent, but they can’t replace a traditional, in-person public setting where elected officials interact with their constituents.”

Last month, the Pennsylvania legislature passed and Gov. Tom Wolf signed SB 841 (now known as Act 15), which provides local governments explicit authority to conduct business remotely for the duration of the pandemic provided the public has the opportunity to participate either live or by submitting comments in advance through email or postal mail.

Most local governments are taking one of four general approaches to holding meetings during COVID-19:

Municipal officials report that, in general, meetings have been running smoothly.

Holly Brandon, chief clerk of Montour County, which has been streaming its commissioners meetings via the internet and by telephone, said that members of the public have been tuning in successfully, so the county plans to continue to keep physical access of its meetings closed for a while longer even as the county moves into the “yellow phase” of the governor’s reopening plan on Friday.

“We’re trying to keep everyone’s safety in mind,” she said.

In Cranberry Township, Butler County, township manager Jerry Andree said that 44 people tuned into its most recent meeting, a far higher number than attend most of its in-person meetings. And although Act 15 allows municipalities to suspend statutory timelines for building permits and other land development projects, Andree said remote meeting technology made it possible for the township to go full speed ahead with granting approvals.

“We want [construction] to hit the ground running,” he said.

Back at Penn Manor, now that meetings are occurring in a secure online format, Reisinger said the benefits have gone beyond mere compliance with the Sunshine Law: public engagement has increased.

“We have definitely seen an uptick,” said Reisinger, noting that more than 20 people attended Monday evening’s board meeting and at least 10 asked questions or made comments to the board, both of which far exceed the “historically pretty low” participation the board has had at its in-person meetings.

Reisinger said he anticipates the school district will try to continue to livestream its meetings and allow the public to participate that way even after the COVID-19 pandemic.

“In chaos, there is often opportunity,” he said. “I think this is most certainly an opportunity for us to rethink how we engage with the public. And I think, like most things, now that the community is becoming generally more comfortable with being online, at some point when we do return to normal, we’ll definitely be taking a look at how we can create a stream or continue this trend of increasing public participation.”

Andree is not so sure Cranberry Township will continue to stream its meetings once this is over, but he said he is open to the conversation.

“I’m not so sure if it really improves participation or not,” he said, adding that he fears that, if video streams of meetings become the norm, grandstanding by either members of the public or board members could become an issue.

To Melewsky, as long as in-person access to public meetings resumes as soon as it is safe, more public engagement through remote participation is a good thing.

“Anything an agency can do to get people actively involved with their government serves the public interest because government functions best when it is aided by an informed, involved citizenry,” she said.

Overall, municipalities continue to make good-faith efforts to comply with the Sunshine Law, both she and Erik Arneson, who heads the state’s open records office, said.

“A lot of agencies have spent a lot of time and effort to make sure the public can view and participate in public meetings, and they deserve a lot of credit for doing that so quickly,” said Arneson.

Butler City Councilman Jeff Smith, who was among the local officials that advocated for the state legislation that granted local governments the flexibility to meet remotely, said that “all has gone well” with his council’s meetings via Zoom.

“Do I prefer live meetings? Definitely,” he said in an email. ” But do these Zoom meetings work?  Absolutely!”