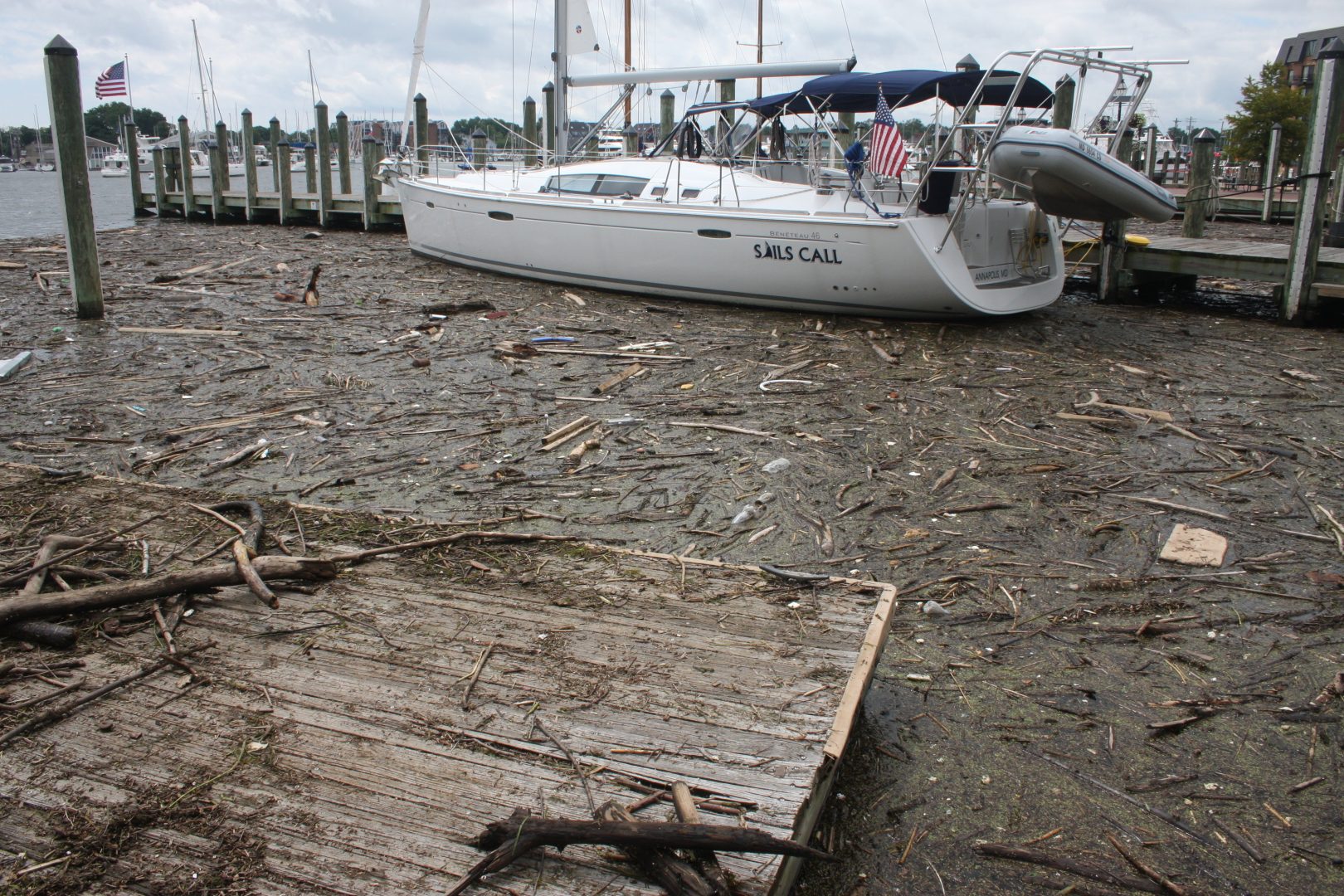 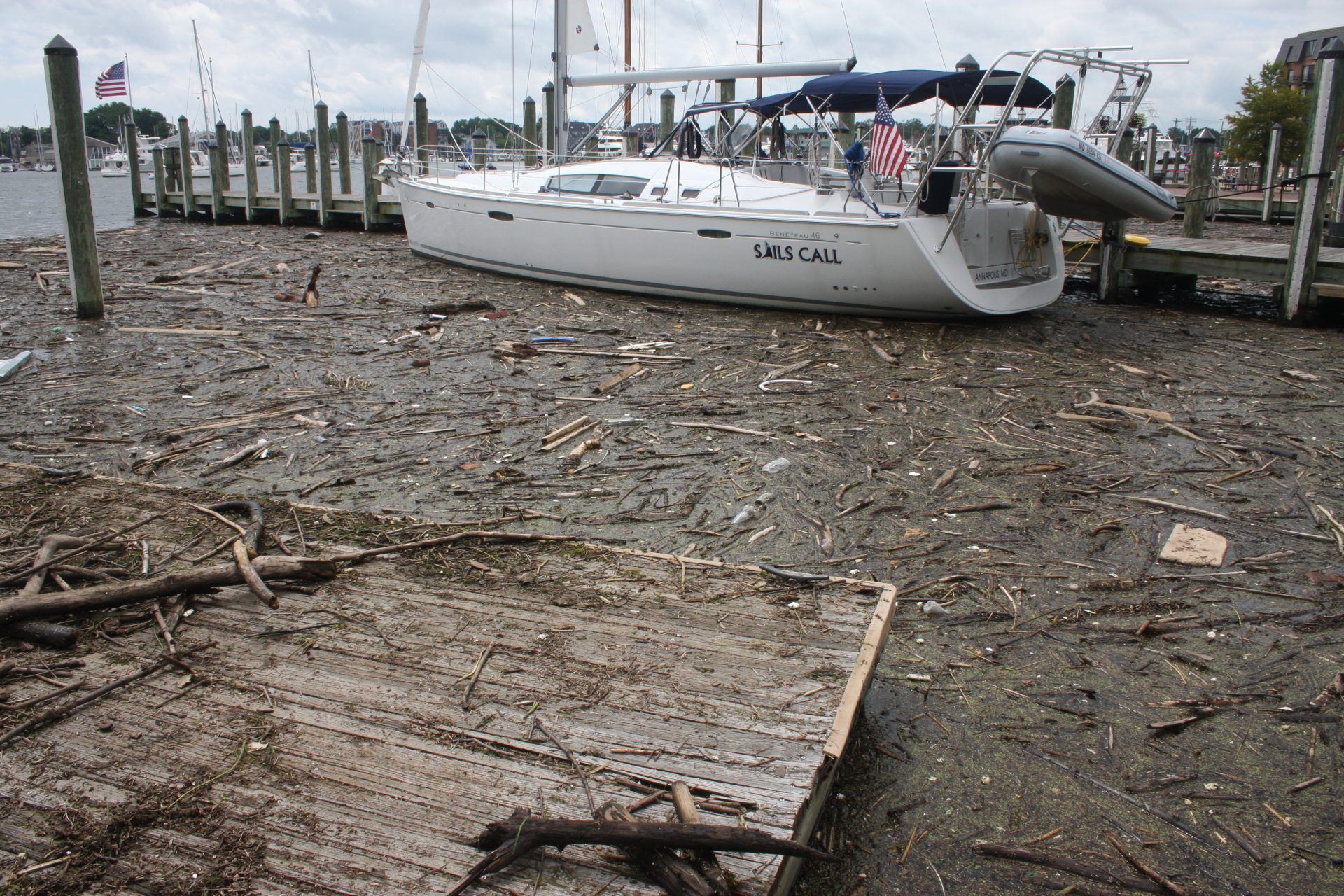 FILE – In this Aug. 1, 2018, file photo, debris washed into the Chesapeake Bay from record rainfall accumulates around a sailboat in Annapolis, Md. An annual report on the Chesapeake Bay says pollution from unusually heavy rains in 2018 contributed to the first decline in a decade in the overall health of the nation’s largest estuary. Now, a new report says more nitrogen pollution is flowing into the bay than previously thought.

An environmental watchdog group says emissions from poultry farms are having a larger impact on the Chesapeake Bay than previously thought.

The Environmental Integrity Project’s (EIP) analysis estimates that about 1 million more pounds of nitrogen pollution are entering the Chesapeake Bay each year from the poultry industry than state and federal cleanup programs estimate.

It said that’s because the Environmental Protection Agency is using outdated information to account for ammonia emissions from chicken barns. The gas breaks down in the environment and releases nitrogen.

EIP took 2018 data from the federal and state Chesapeake Bay Program on the amount of pollution entering the bay’s tidal waters and used information from recent emissions studies and the U.S. Department of Agriculture’s latest farm census to adjust for new estimates. It said ammonia air pollution from the poultry industry in bay states contributes about 12 million pounds of nitrogen to the bay every year, bringing total nitrogen runoff to about 24 million pounds annually.

Pennsylvania Department of Agriculture Press Secretary Shannon Powers said in a statement that state law exempts air emissions from animal waste from reporting to the EPA.

“The estimate of additional nitrogen cited in the report, though it sounds significant, is a small fraction of the total nitrogen and is likely attributable to a rounding error due to unknowns and assumptions used in interpreting the Bay Model,” Powers said.

The EPA and Pennsylvania’s Department of Environmental Protection did not respond to requests for comment.

Patrick Fleming, an agricultural and environmental economist at Franklin and Marshall College who was not involved with the study, noted both the EPA and the report rely on computer models to calculate pollution, and that those would be improved by better data.

He said there’s no way to produce food that’s completely environmentally neutral, so it’s important to measure the magnitude of the problem.

“You can’t manage what you don’t measure, and so having good data on the sources of pollution is the first step in better management and better water quality,” Fleming said.

Between 2007 and 2017, Pennsylvania saw a 19 percent growth in its broiler chicken industry in watershed counties — the largest increase among bay states.

Half of Pennsylvania’s land area falls within the Chesapeake Bay watershed.

The report named Lancaster, Lebanon, Dauphin and Snyder counties as some of the top polluters from that sector.

Neighboring York and Lebanon counties have seen rapid growth in their poultry industries over the decade.

Powers, with the state agriculture department, said it’s problematic to compare Pennsylvania to other bay states.

“They simply do not compare in terms of size, number of farms or in nitrogen reductions required by the EPA by 2025,” she said. “Lancaster County alone has close to half the number of farms as Maryland.”

The Susquehanna River is the largest source of nitrogen pollution to the bay, and Pennsylvania has already attracted criticism from environmental groups and neighboring states for falling short of cleanup goals.

Christopher Woltemade, a professor of geography and earth science at Shippensburg University who was not involved with the report, said it highlights the problems presented by a rapidly changing food production system and points to the need for conservation practices.

He said it’s important to understand that environmental issues are tied together.

“For those of us here in Pennsylvania, we may or may not have a direct connection to the Chesapeake Bay, but every one of us has a connection to the water that we drink, the stream that’s nearby, what’s happening in our communities,” he said.

EIP senior attorney Abel Russ said, even before the new report, the agriculture sector was not on track to reduce runoff according to bay cleanup goals.

“The wastewater sector has done its part. Those reductions are made and it’s hard to do much more with that sector,” Russ said. “According to the bay states’ own watershed implementation plans, 82 percent of the remaining reductions are going to have to come from agriculture.”

EIP and its allies are calling for regulations to limit the concentration of large poultry operations in watershed areas.

“Pennsylvania needs to do a lot more to regulate and inspect these industrial meat operations as our downstream communities are suffering because of this growth,” said Ted Evgeniadis, the Lower Susquehanna Riverkeeper.

Fleming, at Franklin and Marshall College, noted the report did not discuss the costs of implementing new pollution reduction measures, which will be important to consider.

No bay state has a law regarding pollution control devices on chicken barns.

Codorus Township in York County passed a local health ordinance in 2015 to require any future industrial-scale animal feeding operations install air pollution control filters and ultraviolet lights on their exhaust fans, to catch particulate pollution and kill pathogens. The measure was in response to a proposed poultry facility and feed mill from Hillandale Farms.

Pennsylvania’s Department of Environmental Protection’s latest Climate Impact Assessment projects a doubling of the state’s poultry industry by 2050, as it becomes harder to sustain operation in hotter, southern states.