A farm in Lancaster County.

Farming is essential during the pandemic, but a far cry from business as usual

Uncertainty is a common thread among farmers these days.

April 27, 2020 | 8:02 AM
With our coronavirus coverage, our goal is to equip you with the information you need. Rather than chase every update, we’ll try to keep things in context and focus on helping you make decisions. See all of our stories here.

The co-owner of Hollabaugh Bros. fruit and vegetable farm and market in Biglerville, Adams County, says sales skyrocketed in the past month—up 75 percent over this time last year.

“My daughter-in-law takes care of the ice cream, for instance. And whereas other times [during] this time of year we would sell a few quarts, we’ve sold over 100 quarts of ice cream,” she said.

Customers’ concerns about shopping in big, heavily trafficked grocery stores have shoppers relying more on her family’s market, Hollabaugh said. To help keep up with demand, the market launched online ordering and began stocking things it never carried before, like cereal and peanut butter. Its bakery is packaging flour and butter for retail.

Hollabaugh said she’s grateful her business can stay open. But she’s also worried: If this level of demand persists over the summer, she said they won’t be able to meet it.

Uncertainty is a common thread among farmers these days.

Though farming and food production are essential businesses during the COVID-19 shutdown, restrictions aimed at curtailing the virus’s spread upended the food economy.

Farms that sell direct to consumers, like Hollabaugh’s, are seeing a boom, while farmers relying on industrial supply chains are often finding themselves left in a lurch.

witf · Farming is essential during the pandemic, but a far cry from business as usual

Harvie, a website local farms can use to sell their wares, saw a 200 percent increase in sales in the first few weeks of the pandemic, according to CEO Simon Huntley.

He said one factor might be that people see local food as a way to limit the number of hands on their produce before it comes into their homes.

“A thing that I do wonder is, how long does this sustain itself? And how do we scale up local food? Because it’s not something that can be done really quickly,” he said.

The COVID-19 crisis derailed systems designed to process and package food according to the specific needs of customers like grocery stores, restaurants, and schools. Those systems aren’t agile enough to repackage or reprocess products for different kinds of customers.

People don’t consume food the same way at home as they do in schools or restaurants, said Joel Rotz, who manages government affairs and communication at the Pennsylvania Farm Bureau. 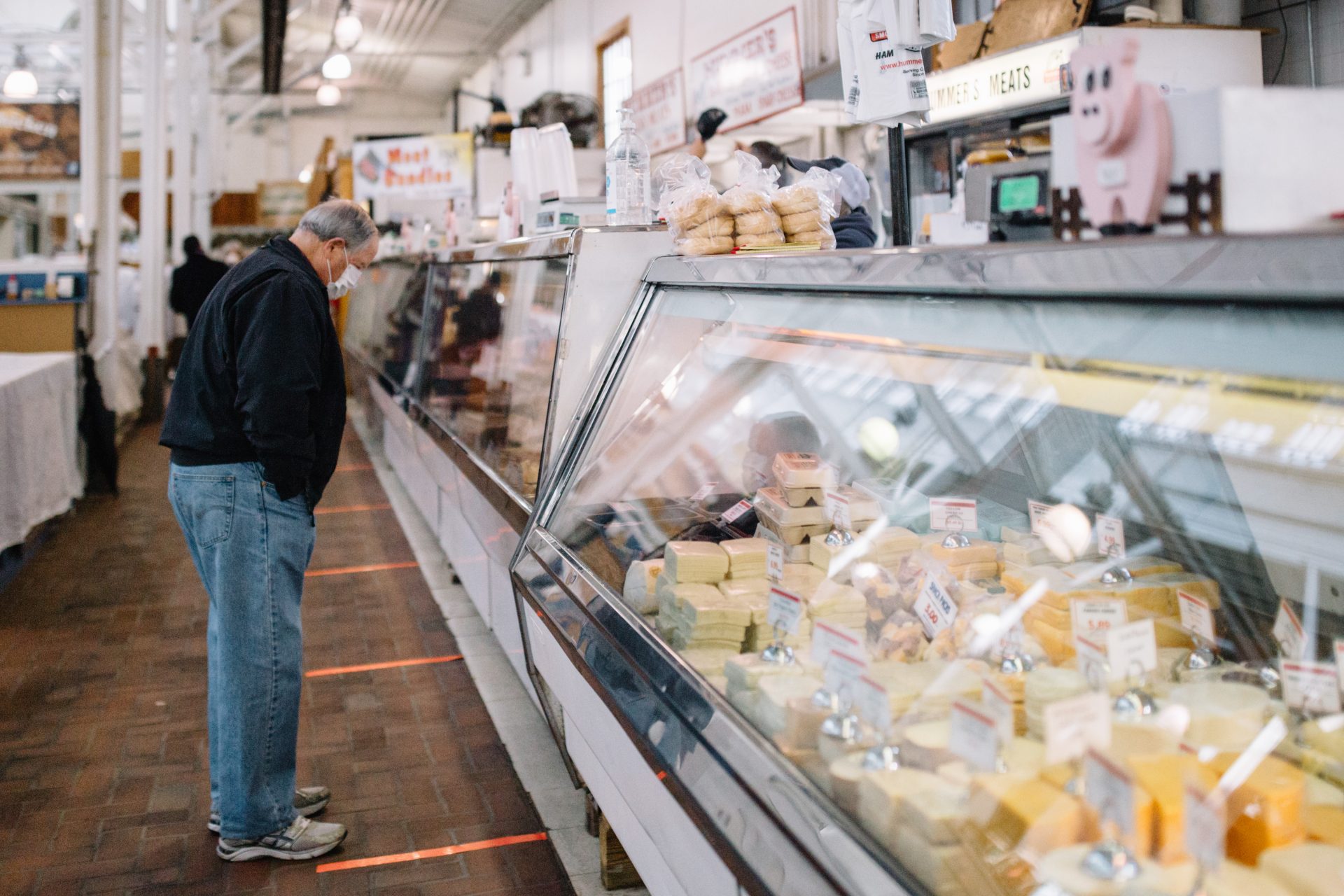 A man looks at the display at R.G. Hummer Meat & Cheese inside the Broad Street Market in Harrisburg. 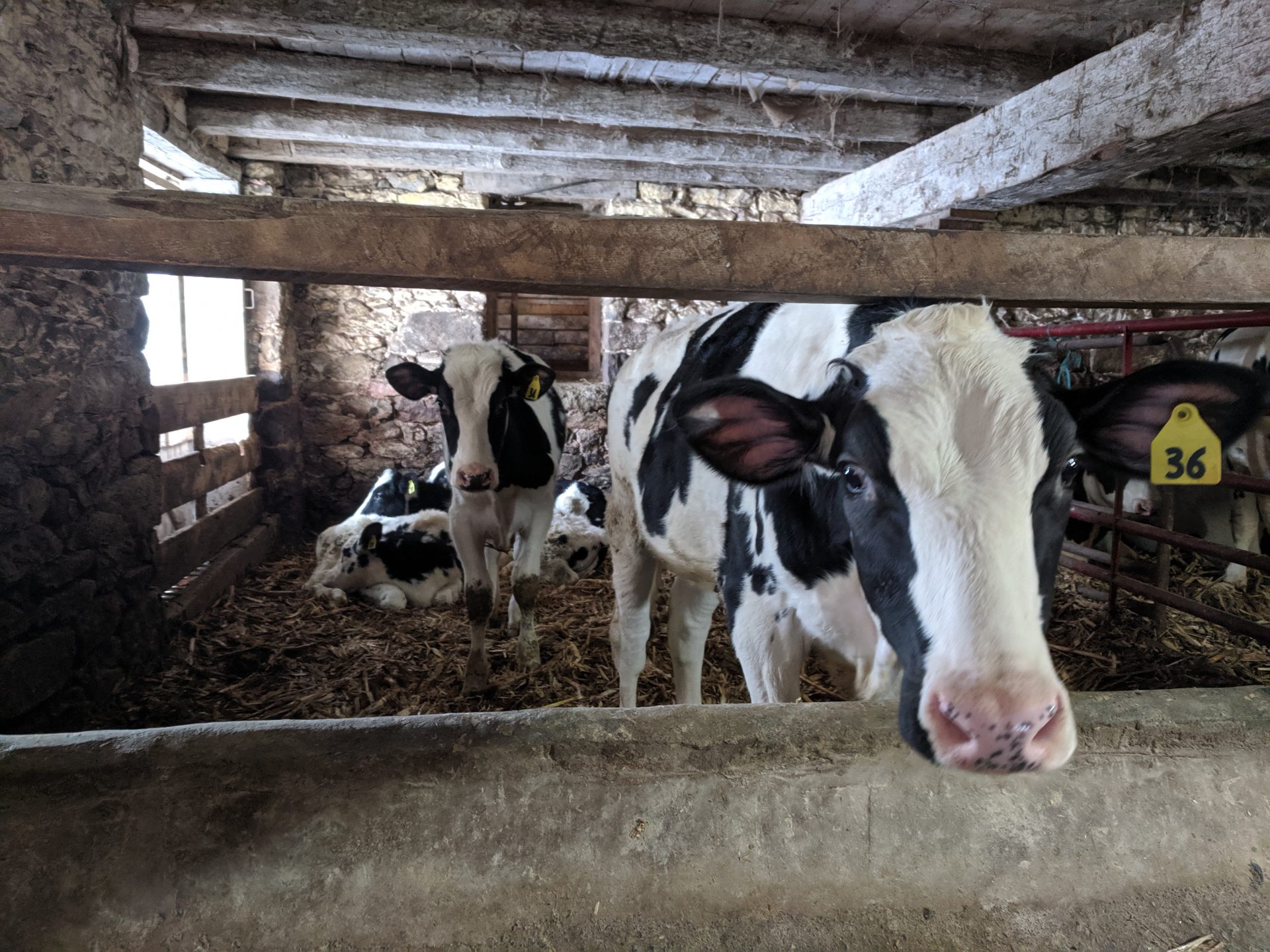 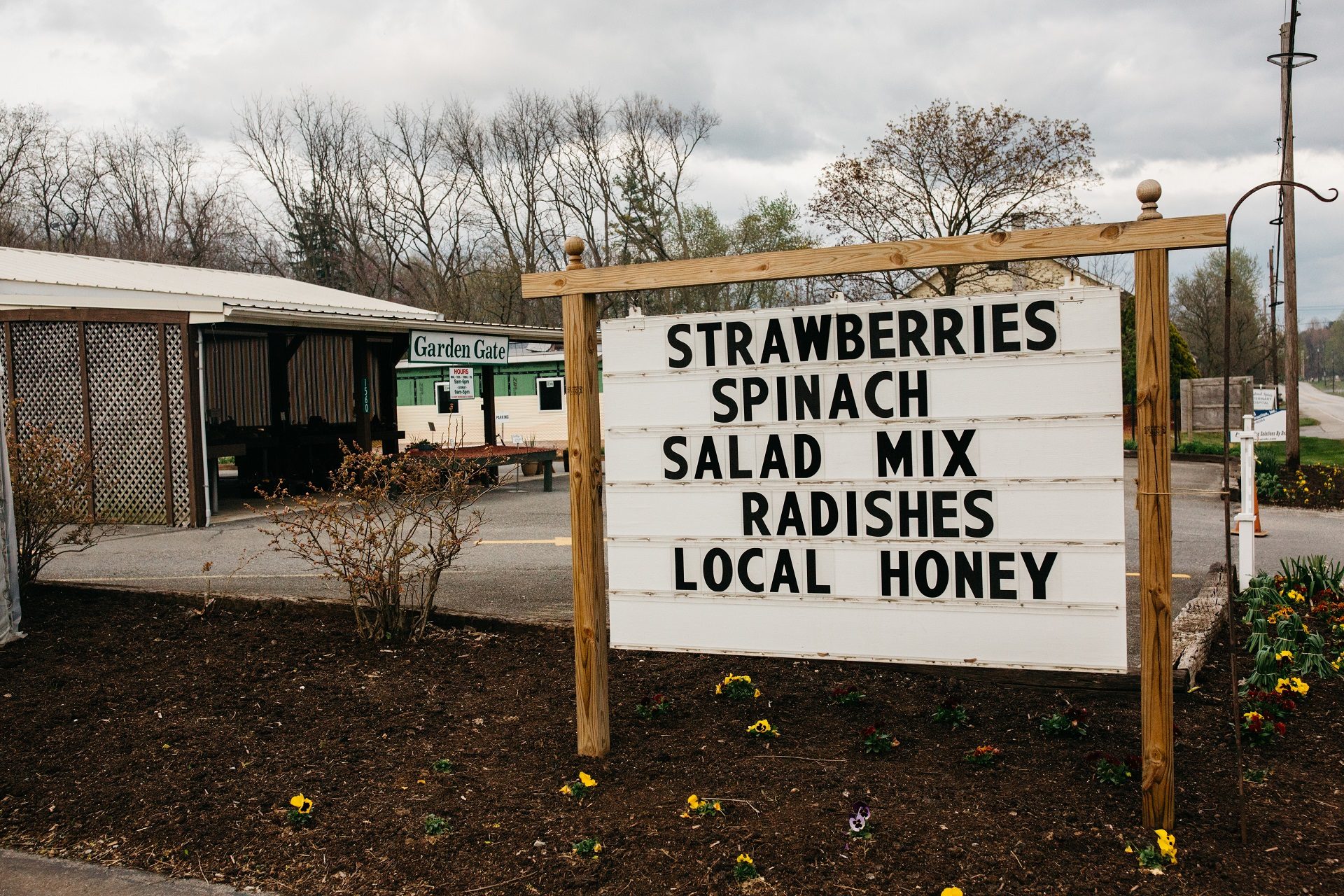 A farm stand advertises its wares. 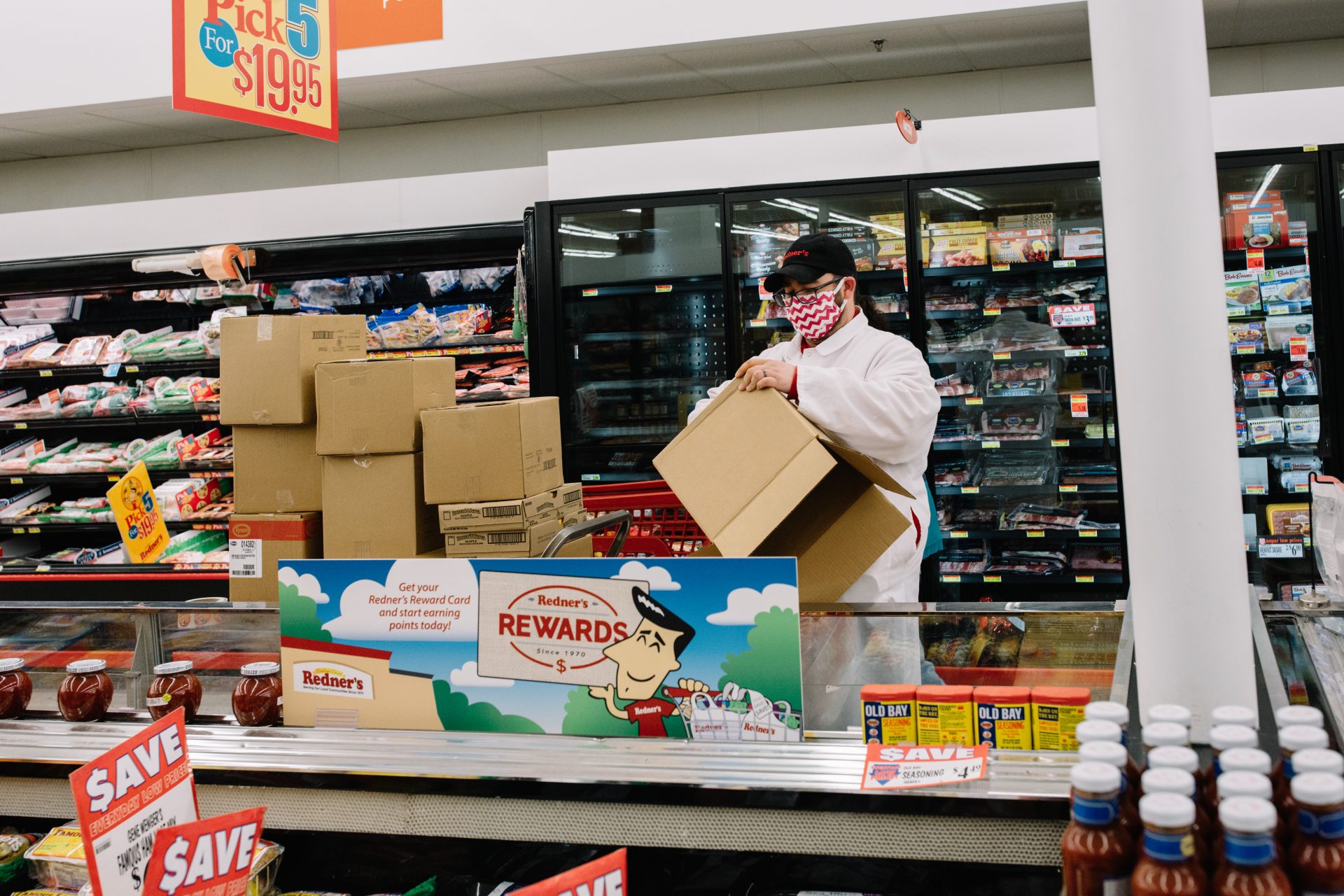 An employee unpacks boxes inside a Redner’s Market.

“We’re the biggest mushroom growing state in the nation and the restaurant business shutting down hugely impacted the consumption of mushrooms,” he said. “And so, mushroom growers are finding themselves destroying stocks of mushroom and not planting additional mushrooms.”

Rob Barley, chairman of the Pennsylvania Milk Marketing Board, said when schools closed, milk distributors suddenly had a lot of milk ready to go in half-pint containers that they couldn’t send to grocery stores or repackage.

He said even though stores were wiped clean of milk early in the shutdown, that spike didn’t make up for the drop off from restaurants, which use about half of all dairy products.

Barley said there’s now 10 to 15 percent extra milk on the market, and that’s driving down prices again for an industry that was already struggling.

Barley said his farm, Star Rock Dairy in Lancaster County, has been forced to dump thousands and thousands of gallons of milk in the past few weeks.

Lancaster County dairy farmer Lisa Graybeal had been optimistic about 2020.

“We just came off of four very bad years and it started to look like it was picking up a little bit,” she said. “And then coronavirus came, and we’ve seen the milk prices just absolutely bottom out.”

The virus hit during the expensive planting season when Graybeal’s 760 Holsteins are producing more milk than other times of year.

“Any other time of year we’d be cheering,” Graybeal said.” But now that we’re in this time, it does make us nervous. It makes us very nervous.”

Rotz said long-term milk prices are expected to go to historic lows and stay there for some time.

At Shelmar Acres in Mount Joy, Mitch Shellenberger is wondering what will happen to his 300 heifers.

He has a contract to sell them to Hatfield Quality Meats, but his shipments are getting canceled.

Some of that is due to lower demand from restaurants, but it’s also a workforce issue.

Hatfield’s plant is in Montgomery County—an area hard hit by the virus. So many employees are calling off work, either because they are sick or because they’re afraid of getting sick, that the plant can’t operate at full capacity. 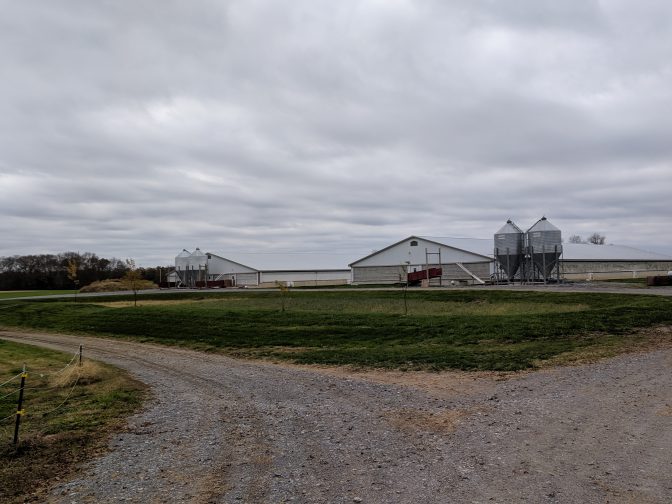 Shellenberger is working on a tight time frame. The plant will usually only take pigs that are in a specific weight range. Once a hog weighs more than 315 pounds, Shellenberger gets penalized and could end up losing money. He hasn’t heard if the plant will waive that penalty because of the circumstances.

If the crisis drags on, Shellenberger is worried that could spell the end for his farm.

Using aid money authorized by Congress, the U.S. Department of Agriculture plans to pay out $16 billion to farmers and ranchers affected by the pandemic.

Rotz, at the Pennsylvania Farm Bureau, said the aid will be helpful.

“But it’s certainly not going to make farmers whole,” he said. “And particularly, again, with dairy given the fact they’ve just taken a beating for several years now and were just beginning to see profits returning to the farm. It’s just a huge setback to see this happening.”

Some, like Diana Martin at the Rodale Institute, are concerned the federal program will mainly benefit large farm businesses and not small, family farms.

“Right now, we want to support our local farmers and make sure we still have access to fresh food,” she said. “But I also feel like the world has kind of stopped. And it’s an opportunity for us to think about the kind of world that we want to go back to.”

Shellenberger stressed it’s important to make sure farmers can come out on the other side of this.

Most students aren’t being instructed in real time, according to plans submitted to state