American Dream performs at the Earth Day Rally at Belmont Plateau in Fairmount Park on April 22,1970.

How ‘Filthydelphia’ made Earth Day a thing 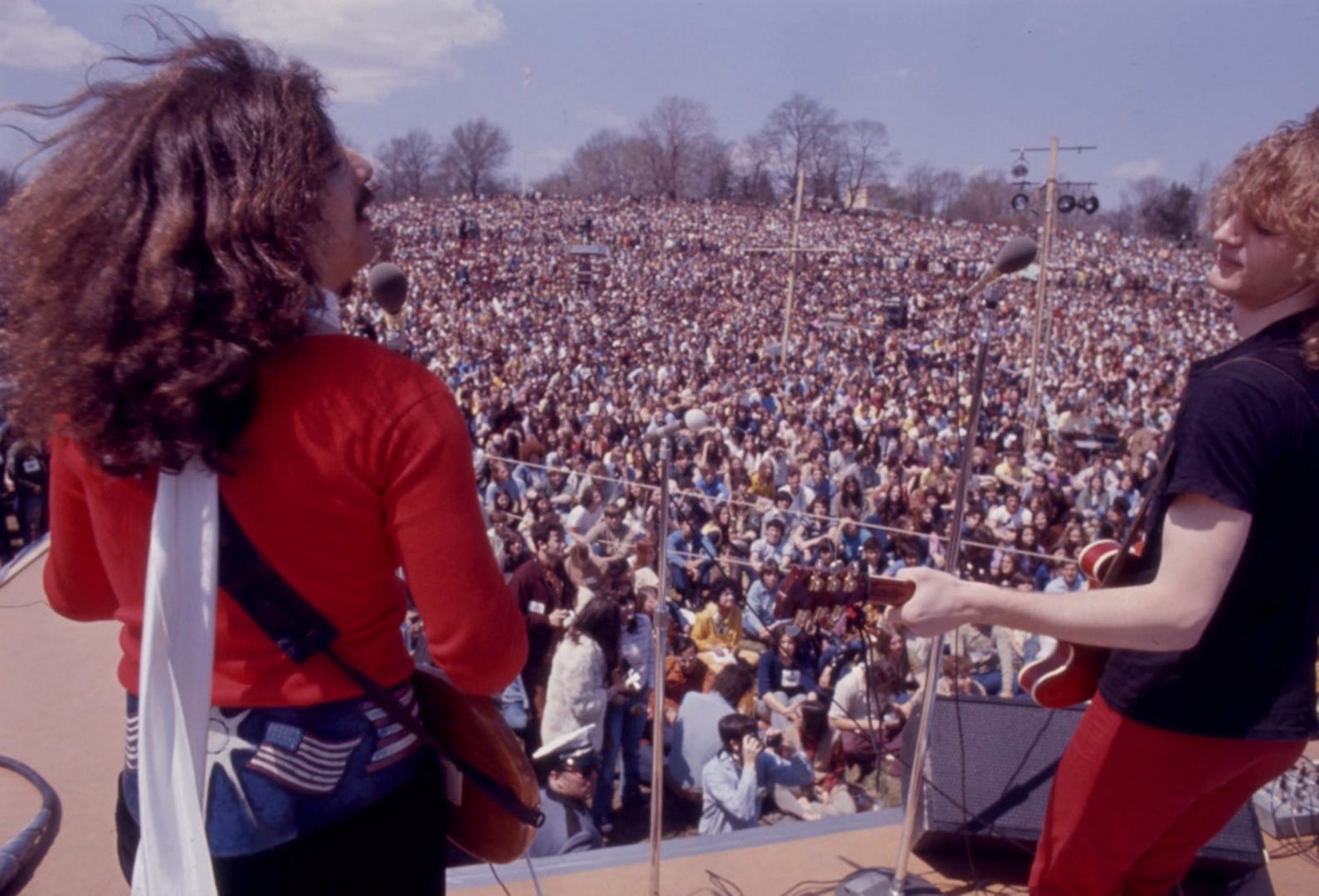 American Dream performs at the Earth Day Rally at Belmont Plateau in Fairmount Park on April 22,1970.

April 22, 1970 — the first Earth Day — marks the birth of the environmental movement responsible for getting lead out of our homes, raw sewage out of our drinking water and toxins out of our air.

The annual celebration and political action it inspired helped Philadelphia become a city where it’s possible to run on the river without choking on smog and drink tap water without fear. But what many people don’t know is that without the work of Philadelphians, Earth Day may never have become a thing.

Broadway, beatniks and 40,000 protesters in ‘Filthydelphia’

“One of the biggest Earth Day observances was in Philadelphia,” CBS news anchor Walter Cronkite said in a widely viewed 1970 documentary about the international action. “An estimated 20,000 to 40,000 persons gathered in perfect weather in the city’s largest park. It was an Earth Day success story, a major demonstration in a major city.”

“This is what keeps the sun from shining on Philadelphia,” the narrator said as images of soot and smoke pour out of industrial chimneys.

“So much noxious waste is involved that some people here have begun to call their city Filthydelphia,” he said, invoking a nickname still in circulation 50 years later.

That major success was keynoted by U.S. Senator Edmund Muskie, who introduced the Clean Air Act of 1970 and worked on the Clean Water Act in 1972. He spoke to the Woodstock-looking crowd at Belmont Plateau in Fairmount Park. 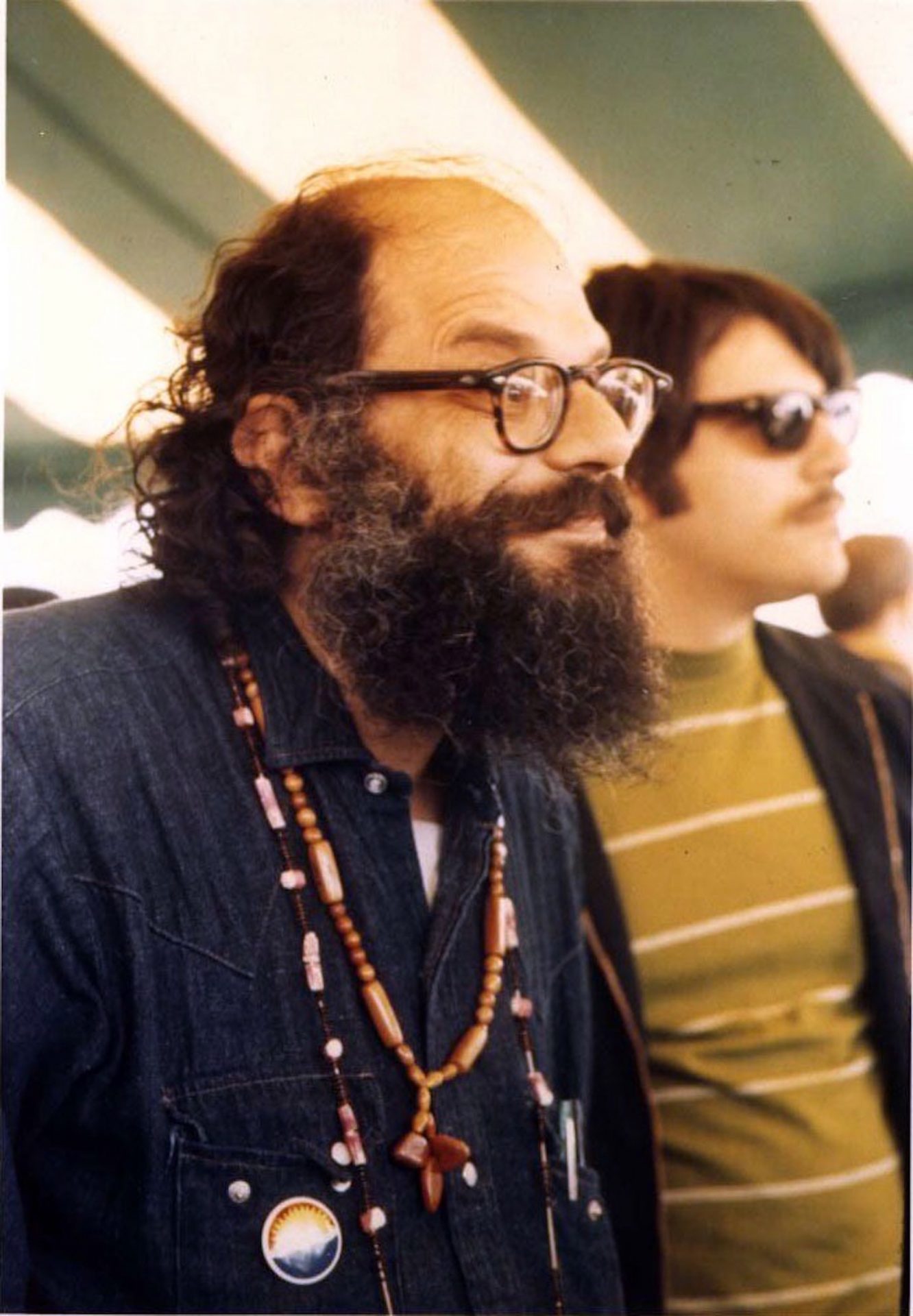 One day earlier, on April 21, 20,000 people had gathered at Independence Mall to hear Ralph Nader talk and watch the whole cast of the Broadway musical Hair perform “The Age of Aquarius” and “Air,” a minor hit that salutes sulphur dioxide and carbon monoxide.

Beatnik poet Allen Ginsberg and a Native American rock band from California called Redbone, as well as prominent scientists, politicians, artists, ecologists, and others came to Philly to attend the rally.

“It was a big, big deal,” recalled Austan Librach, chairman of the Earth Week Committee of Philadelphia, who later created environmental departments for local government in Washington, D.C., and Austin, Texas.

The Unicorn Killer was not the founder of Earth Day

Ira Einhorn, an environmental activist later convicted of murdering and composting his ex-girlfriend and known as “The Unicorn Killer” was involved in the organization of Philly’s Earth Week, but he was not one of its founders.

According to Librach, Einhorn was involved with the city’s hippie scene and wanted to direct the organizing committee for Earth Week. But Librach convinced him not too.

“We met in his house, he was naked the entire time, and we negotiated so that I became the chair and I agreed to let him be the master of ceremonies,” the former University of Pennsylvania regional planning student said.

But Einhorn later claimed that he was the one who started Earth Week. And a widely seen photo of him on the Belmont Plateau stage in Fairmount fueled the confusion. 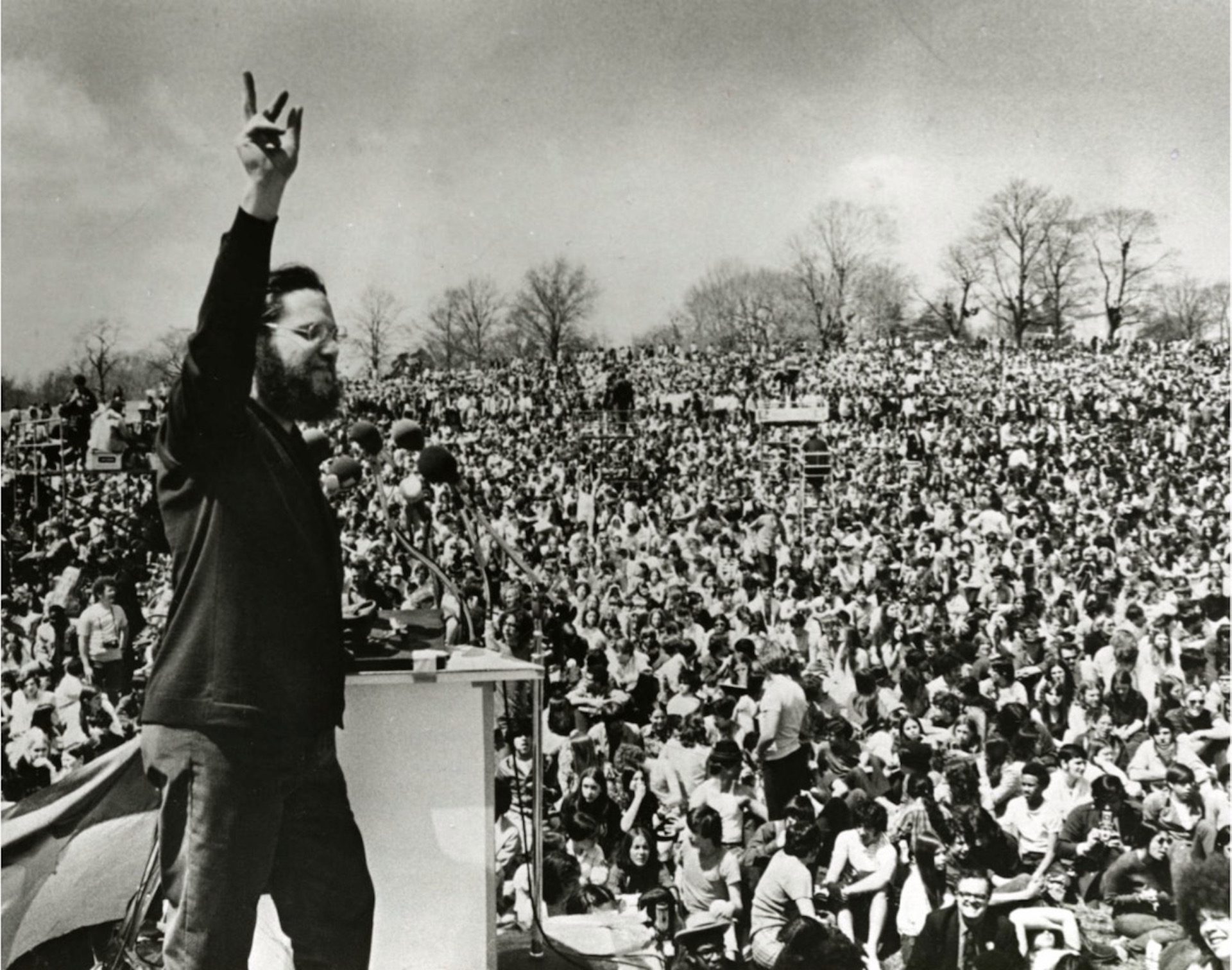 It all ended with Librach and Furia dismissing his claims on an op-ed published by The Inquirer in 1998.

“He is not telling the truth,” they said. “In fact, Einhorn was asked to leave several meetings of the organizing committee that he attempted to disrupt. He was not welcome there, nor did he contribute in any material way to the committee’s activities.”

Grad students made it happen

It was actually a group of University of Pennsylvania landscape architecture and regional planning students who started the Earth Week Committee of Philadelphia.

The chair of the university’s landscape and planning department, Ian McHarg, had just published “Design with Nature,” a book that radically changed the urban design field to embrace nature. The book went on to become a landmark of ecological design and McHarg, an international leader of the environmental movement.

But in the semester leading up to the first Earth Day, McHarg inspired Librach, a 19-year-old regional planning student at that time, to direct the planning committee. He then hired Edward W. Furia, a planning and law student from Penn, as the project director.

The group expanded to other colleges and community-based organizations. Politicians and businesses wanted to be associated with this new environmental movement.

Frederick Steiner, dean of the University of Pennsylvania Stuart Weitzman School of Design and co-executive director of The McHarg Center, says that the late professor’s Earth Week work continues to shape the environmental movement.

“One of the things they did was a Declaration of Interdependence — an activity to call attention to how everything is connected to everything else here on earth,” Steiner said. “That’s one of the key lessons and especially important in these days of the pandemic.”

Philadelphia can thank that Earth Week-inspired intellectual revelation for some of the city’s most beloved public spaces, the dean said.

“The Schuylkill River trail from Bartram’s Gardens all the way to Valley Forge,” Steiner said. “Many of the interventions, the rain gardens, the green infrastructure that’s being built around Philadelphia was a direct result of the people that were involved and were students at Penn that went on to have careers as planners and designers.”

Early on in the process of organizing Earth Week, the organizer committee realized to fund their ambitious agenda, they needed way more money than what they could pull together from college students.

“Simply put, it became obvious that Earth Week would be stillborn if we couldn’t quickly raise a substantial amount of cash,” said Furia in a published recollection.

First, the committee got $10,000 from Philadelphia Gas Works, the city’s gas utility. Then, they struck a deal with the Philadelphia Chamber of Commerce, which had originally raised some funds to run ads against Earth Week in a local newspaper.

Furia and Librach convinced the chamber to ditch their negative ads and instead, become a member of the Earth Week Committee, giving them an opportunity to express their concern for the environment.

The $30,000 deal raised concerns from activists saying it would limit their capacity to protest against big pollutants, such as the refineries.

Aside from the revenue generated from businesses, the committee got participating companies to publish the specific pollutants they were dumping into the air and into the river.

“I would have to say that that moment — when we realized we would get specific data as to who was putting what pollution where — was the most important moment during the entire four-month Earth Week initiative,” Furia said in his accounting of the history. “Armed with such data, denial would no longer be a viable strategy for the city or the polluters.” 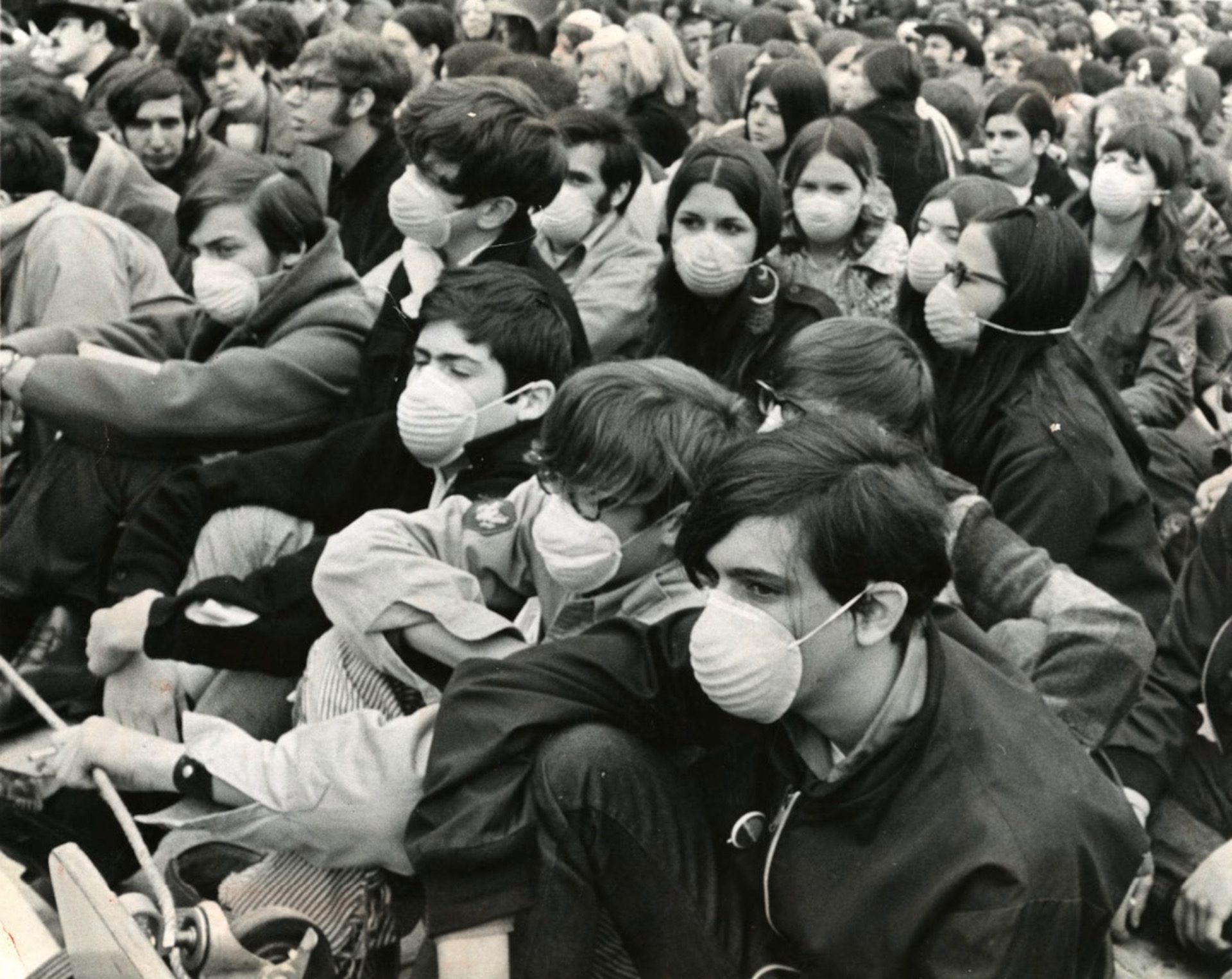 During an Earth Week rally at Independence Mall on April 21, 1970, many members of the audience opted to wear masks in an effort to show dissatisfaction with environmental policy.

50 years ago, they were wearing face masks too

It’s a strange moment to talk about progress. No one will be celebrating Earth Day on Belmont Plateau this year because of the coronavirus pandemic that has shut down the nation. Yet we are quarantining in a much cleaner environment today than they protested in 50 years ago – despite the fact that protesters then wore face masks to raise a point about air pollution.

“You can’t argue with the fact that our air quality is much better, not just in Philadelphia but in many cities around the country. You can’t argue that the Delaware and the Schuylkill are much cleaner than they were back then as well,” said Christine Knapp, director of Philadelphia’s Office of Sustainability.

Knapp says diversity is another place where the environmental movement has progressed. The original Earth Week was criticized for being white and affluent. The situation is different today, she said.

“The climate strike movements that I’ve seen in Philadelphia have been very diverse racially and demographically,” she said.

On the flip side, Knapp said, there’s still a lack of transparency and people still don’t know how pollution is affecting them.

“That came up a lot in the conversations around the refinery closure, people not really knowing what was in the air that they were breathing,” Knapp said.

Librach says he’s proud of all the things the movement created. But said he’s disappointed with where things are now.

“We’ve got a lot of people who don’t believe in science, the effort on global warming is not doing very well,” he said. “I think there’s a lot more that could be going on and could be done and isn’t being done.”