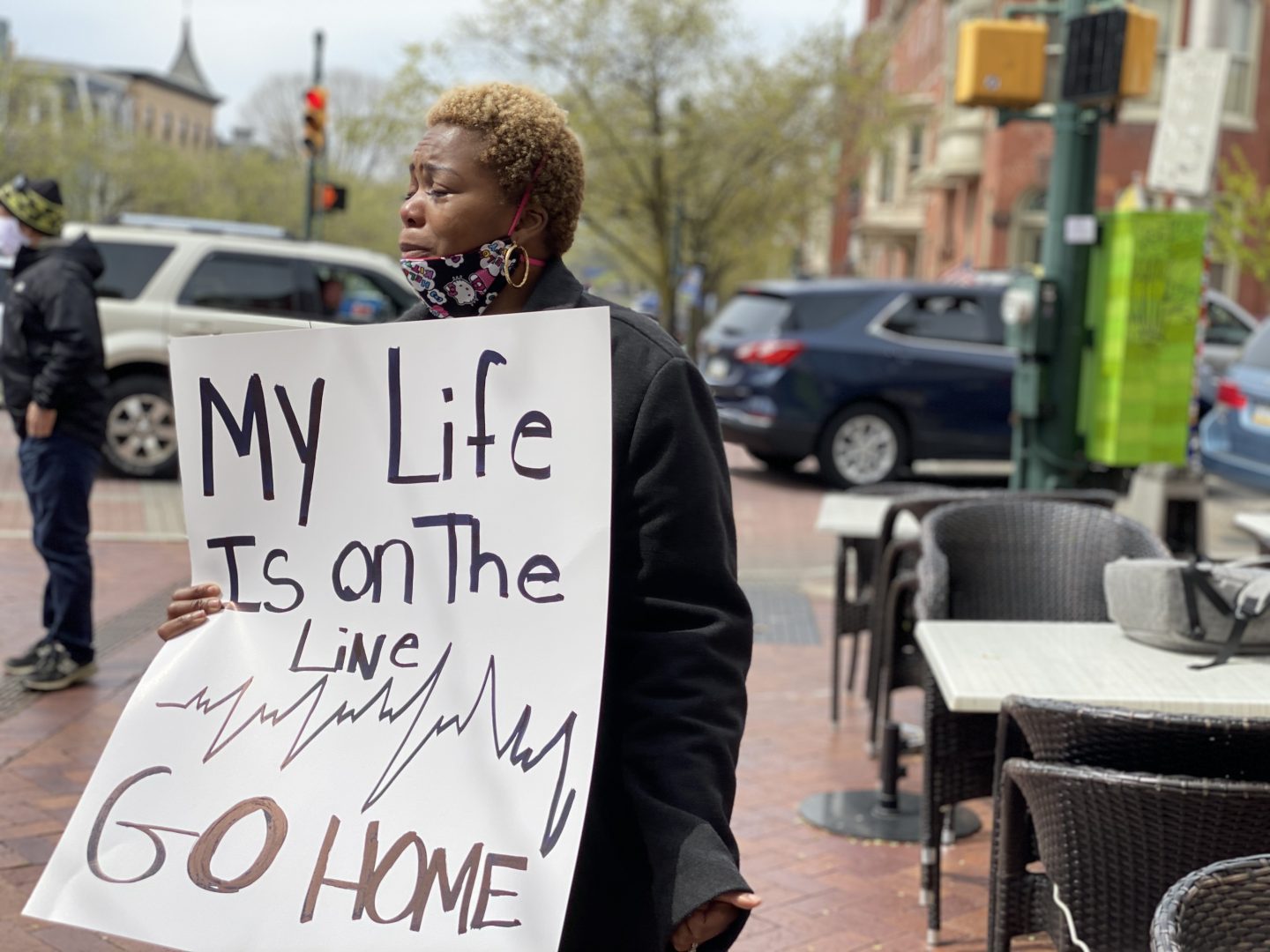 Update: A line in this story was changed to remove reference to one person’s workplace because that person could potentially be a target for retaliation.

Armed with nothing but signs and science, half a dozen medical workers from across the state showed up near the capitol in Harrisburg on Monday to counter the message of hundreds of “ReOpen PA” protesters calling for an end to coronavirus restrictions.

The small group of health care workers told people participating in the larger rally to go home to keep their loved ones safe. But they made their point from a distance.

“Don’t get close to talk to them,” one of the organizers said, explaining that they might be confronted by protesters. In that case, he urged, keep their distance. “They’re all f**king infected.”

At the end of the vehicle protest route, hundreds of Pennsylvanians — many of whom displayed signs supporting President Donald Trump — stood side-by-side and neglected to wear masks, ignoring the safety protocols urged by public health officials to help keep the coronavirus from spreading.

Anti-shut down protesters yelled at the nurses and physician assistants as they drove by. Some held up American or Gadsden flags to block the medical workers’ signs. Some angrily reminded the health care workers that they were lucky they were working.

“You have a job!” one protester screamed at Katrina Rectenwald, a 36-year-old registered nurse who works at a Pittsburgh hospital.

While horns blared and pro-Trump speakers used megaphones to blast Gov. Tom wolf and call the news media a “virus,” Rectenwald held a sign saying she didn’t want people in her ICU.

“When we hit our surge, people are going to come in and they’re going to die because there’s nothing we can do,” she said.

Noting the small counter-protest, one of the organizers of Monday’s protest said it wasn’t his job to enforce social distancing or get protesters to wear masks. He also said he couldn’t help it if “some people” turned the protest into a political one.

Matthew Bellis, a Lancaster County resident and co-organizer of the ReOpen PA Facebook page, said he welcomed President Trump’s endorsement of the kinds of protests across the nation.

Those protests, though, have turned a public health crisis guided by science into a political dogfight over the authority of governors and public health officials to order strict mitigation efforts.

And though protesters have only called on the governor to reopen the state, the organizers admittedly hadn’t gotten guidance from any medical or health experts on when the state should properly open or how.

“That question isn’t on us, it’s on the governor,” Bellis said.

As the political rally unfolded nearby, complete with “I’m Proud to Be An American” blasting on the loudspeakers, Yetta Timothy, a certified nursing assistant in Harrisburg, broke down in tears.

“I’m sitting here and I’m looking at the signs saying open PA with no testing,” she said, crying. “It’s like they don’t care about lives, the people around them or the people they love.”