The area where the inmate lived at SCI Phoenix has been placed under quarantine, officials said. 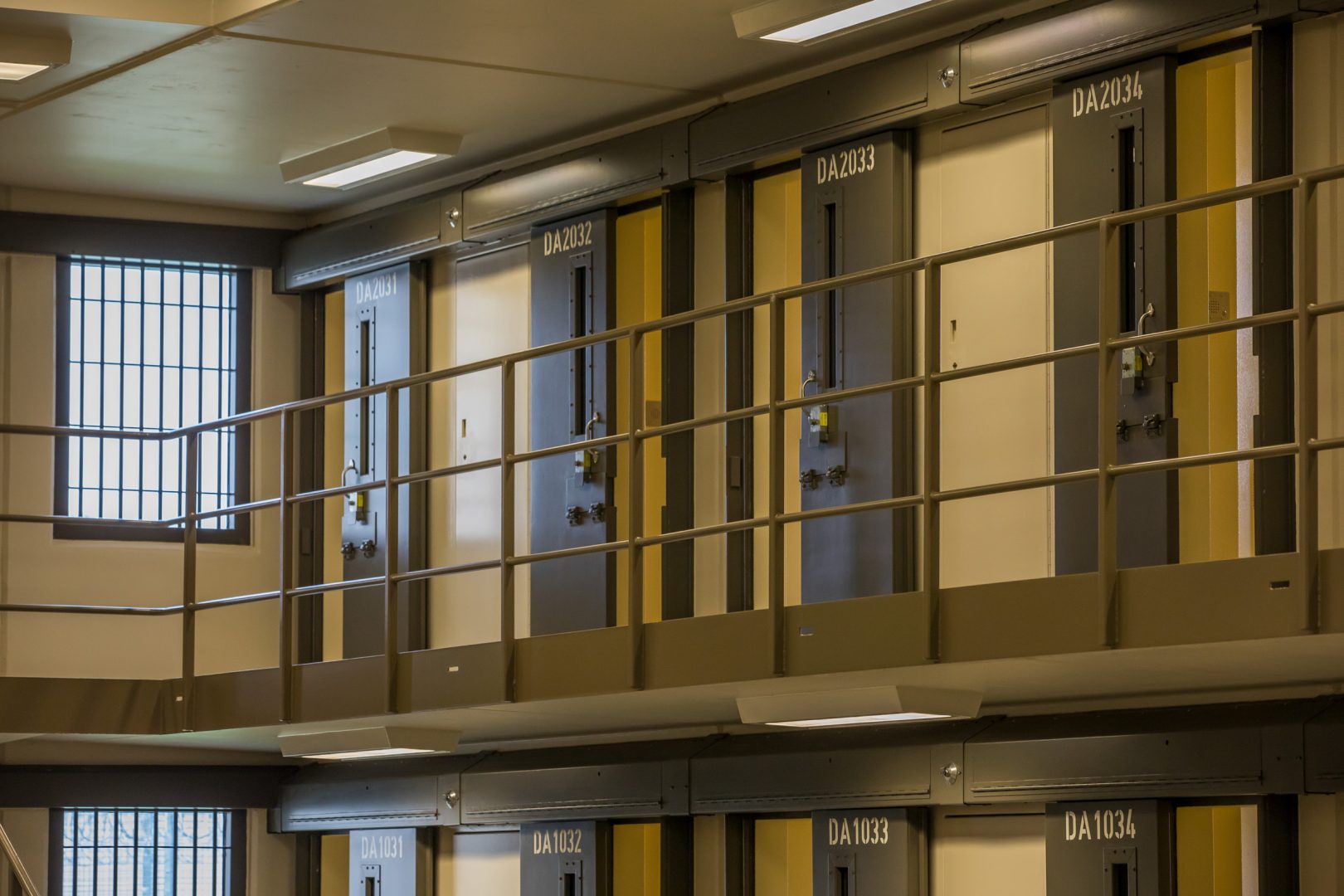 The area where the inmate lived at SCI Phoenix has been placed under quarantine, officials said.

When Pamfilo Dacua gets out of his bed, he can take about two steps forward before he hits a wall. If he turns right, he’ll run into a desk after about one step. If he turns left, he has about three more steps before he runs into a door.

Dacua is an inmate at SCI Phoenix, where one inmate is already dead of COVID-19 and another 19 are infected.

Since the coronavirus outbreak forced parts of the prison to go into lockdown, Dacua has shared a cell with one other person for all but one hour each day.

“It’s like locking yourself up in your bathroom with another person for 23 hours,” he said over the phone. “This is a powder keg! The staff are agitated. Inmates are agitated.”

Prisons and jails were not built for an infectious disease-driven public health emergency. Nearly every jail or prison was designed to keep as many people as possible in close enough quarters that jailers can closely monitor them. But while that may be effective in preventing escape or violence, it actually helps diseases like coronavirus spread.

In Arkansas, after one inmate tested positive, the prison tested the rest of the cell block and found that 44 of 47 other inmates were asymptomatic carriers.

Activists, prison reformers and progressive prosecutors have called on Pennsylvania leaders to decarcerate in large numbers, reducing lower-risk inmates and ones close to finishing their sentences. Fewer prisoners, they say, will make it easier for corrections facilities to achieve the social distancing needed to stop the spread of the virus..

The problem is a go-slow approach to reducing inmate populations. Gov. Tom Wolf’s proposal last week to release 1,800 inmates would only release 4% of the state’s prison population at most, nowhere near the number that should be released to institute effective social distancing as described by CDC guidelines.

When the jail in Cook County, Illinois, reduced its population by 14%, it wasn’t enough to stop coronavirus from spreading throughout the facility.

The F-unit of the Franklin County Jail in Chambersburg has 32 cells; each contains a bunk bed, a desk and a toilet with a sink. Inmates can take only a few steps without bumping into a wall, and the cramped quarters offer cellmates little ability to keep physically away from each other.

“There’s no way to stay six feet from each other,” said Donnie Caldwell, an inmate at the jail.

The informal prisoner hotline is another vector for the virus. When Caldwell wants to talk with  his neighbors, he goes to the vent in the wall and yells into it.

“That’s how we speak to each other,” he says. “Through the vents.”

The vents track up and down and side to side into other cells. And while that’s a useful way to send a message from one end of the cell block to the other, the vents help the virus jump from cell to cell, even if inmates never come into close contact.

“We know from previous history of health care design, the research shows how natural ventilation leads to lower sickness in the spread,” said Jeff Mansfield, who leads the Restorative Justice Design Lab at Mass Design Group. The firm worked with the Vera Institute of Justice in 2018 on a plan to rebuild prisons and currently has a team dedicated to address how architecture can combat the spread of illnesses.

Earlier this month, a European business association that represents HVAC designers and installers – REHVA – produced research on how vents can spread coronavirus and issued guidance for building managers and homeowners, such as making sure to keep windows open and run ventilation systems regularly.

But that’s not an option in many county jails and prisons. Jail cells – especially in older facilities – don’t usually have windows that prisoners can open whenever they want.

But while forward thinking on prison design might be helpful in the next public health crisis, it for sure doesn’t solve the current problem that corrections facilities face. Instead, jails and prisons are now resorting to full lockdowns where inmates can’t leave their cells — in some cases for days.

A “most extreme solution”

In the week since Gov. Wolf took an initial step toward decarceration, the Department of Corrections so far has submitted the names of just eight inmates for possible release.

In a call with reporters Wednesday, the Pa. DOC said 12,000 state inmates were “medically vulnerable” based on the CDC’s definition. Nevertheless, the department said it’s likely that as few as 40 percent of the 1,800 prisoners eligible for the governor’s release would be let out.

“That’s 720 people,” said Andy Hoover, director of communications at the ACLU of Pennsylvania. “Releasing 720 people is not going to mitigate the risk of COVID-19 spreading in the state prisons.”

Meanwhile, the state prison population is at capacity or near it in almost every facility. As of March 31, seven facilities were operating above capacity. Only five had less than 90% of beds filled. Even if all 1,800 inmates potentially eligible under Wolf’s order are released, it would fall far short of creating sufficient space inside state prisons.

State Rep. Dan Miller (D-Pittsburgh) on Thursday said the Department of Corrections confirmed it would need to release 10,000 inmates to be CDC compliant for social distancing.

“From what I’m understanding, the governor is looking for more to release as a process goes forward. We were told that the 10,000 was not what they were attempting to do,” he said.

In lieu of releases, jailers across the state are keeping inmates in their cells for up to 23 hours a day to keep movement contained.

Through interviews with inmates’ family members along with text messages and phone calls from inmates in both county and state facilities, half a dozen prisoners explained the mental strain of being placed in lockdown, and how tensions are rising between cellmates who have only a few feet to keep away from each other.

Since facilities went into lockdown, one inmate at SCI Camp Hill described a fight breaking out among cellmates. Another inmate at the Franklin County Jail said that he and his bunkmate – who normally get along very well – were starting to get into arguments.

What’s shocking for human rights advocates is how jails are implementing lockdowns, especially in jails where the majority of inmates are either there waiting for a trial and haven’t been convicted or for technical violations, such as being late to a mandatory meeting or drinking while on parole.

Fifty-four percent of state prison admissions are for those kinds of technical violations, one study noted.

Manuel Toscano, a partner at the social equity design firm Zago, said that administrator’s fail to understand what happens to the inmates’ mental health when they place them on lockdown for weeks: “These institutions are using their most extreme solution.”

Across the state, county jails followed the lead of the Department of Corrections. In mid-March, the department halted inmate visitations at all state facilities and confined prisoners to their cells for nearly every hour of the day. Administrators said the moves were a precaution to keep inmates and staff safe, and follows a public health pattern of early mitigation to keep an influenza outbreak from spreading.

“To the extent we can keep it out, we have some advantages,” Department of Corrections Secretary John Wetzel said to PA Post in March. “Once it gets in, those advantages turn to disadvantages.”

Historically, that’s true. Eastern State Penitentiary, the world’s first prison built for mass incarceration, was built in 1829 after the Walnut Street Jail in Philadelphia was overrun with typhus and tuberculosis. Thinking the city air and close quarters were to blame, Eastern State Penitentiary’s planners created single-occupant cells so prisoners couldn’t come into contact with each other and could practice penance in solitude.

After increased public pressure, administrators were forced to modify the prison to one that resembles what a prison is like these days, with inmates exercising or eating together.

But when the 1918 Pandemic hit and crippled Philadelphia, the prison effectively kept the virus out because it locked down the facility early. When there were cases, individual units were available to isolate the sick.

Even the inmate-run newspaper, The Umpire, praised the prison’s response. Only three prisoners and one guard died from the pandemic — a tiny fraction of the prison population compared to the percentage of people who died in the city, according to Matt Murphy, tour manager for the facility, which is now a museum and learning center on mass incarceration.

The facility put inmates on lockdown and in solitary confinement to curtail influenza infections. But prolonged exposure to solitary confinement has been proven to cause trauma, anxiety and severe depression. It’s also been likened to torture by the United Nations and through other adcademic studies.

“The solution isn’t supposed to have 10 people left in prison and they’re all locked down in solitary,” said Dr. Gregg Gonsalves, a health advocate and epidemiologist at Yale School of Medicine. “The solitary confinement aspect of it is barbaric… There’s no public health rationale for what they’re doing right now.”

To that end, corrections officials said that the lockdown is only temporary to keep COVID-19 from spreading. Though, there are currently no plans in place to start easing those lockdowns, even after weeks of confinement.

“The situation was dire in here before,” said Andre Weeks, an inmate being held at the Franklin County Jail on a parole violation. Weeks said he has sickle cell anemia and rheumatoid arthritis, both autoimmune disorders that could be fatal if he contracts COVID-19. “I’m afraid this is going to turn into a death sentence.”