A sign greets any passersby at the closed Elementary Coffee Co. stall at Broad Street Market in Harrisburg on April 10, 2020. The market is much quieter since the coronavirus pandemic effectively shut down the region.

Some fear making the wrong decision or running afoul of rules amid changing program guidelines and confusing instructions. 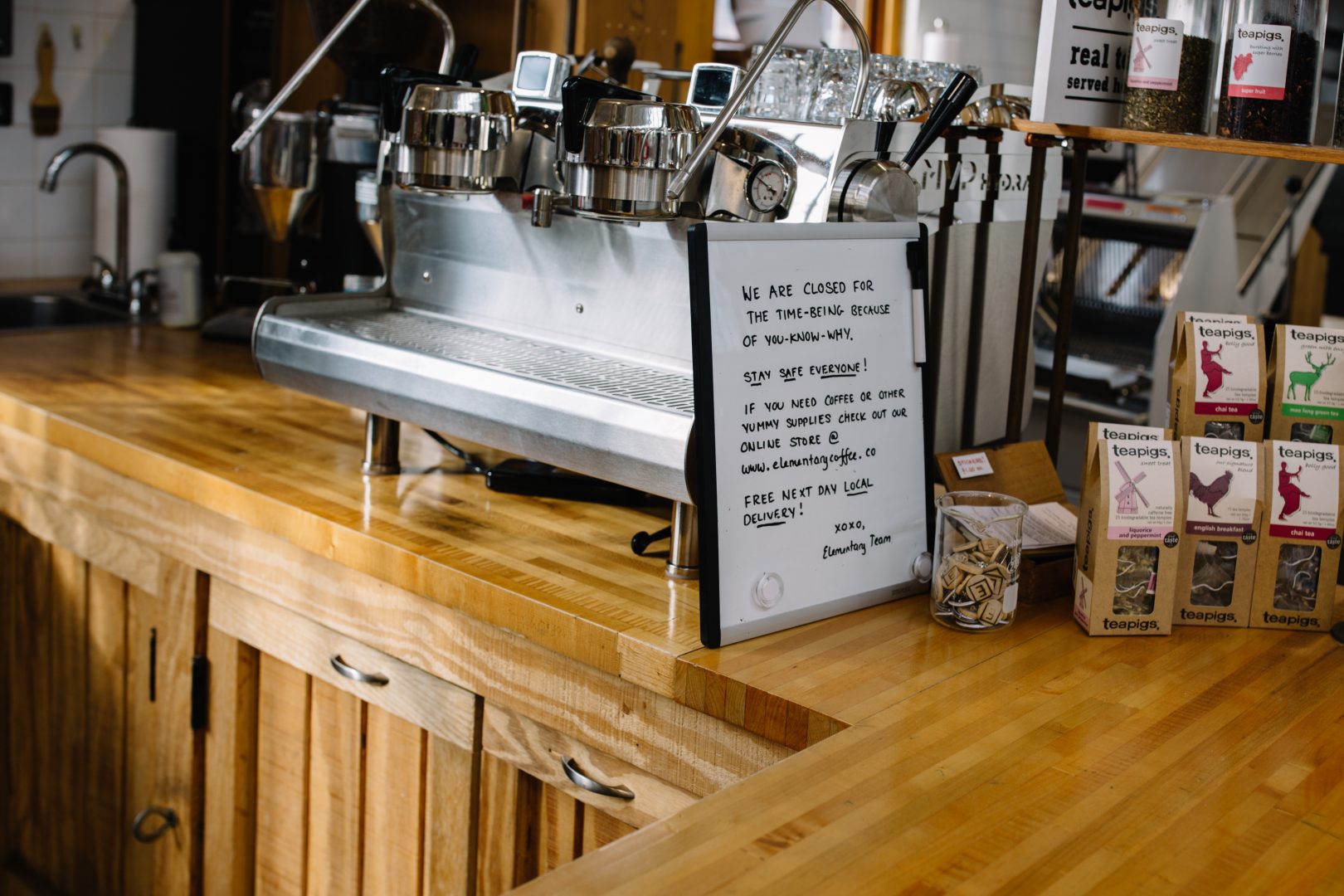 A sign greets any passersby at the closed Elementary Coffee Co. stall at Broad Street Market in Harrisburg on April 10, 2020. The market is much quieter since the coronavirus pandemic effectively shut down the region.

In theory, Hannah Koshinsky had options.

A self-employed business owner, with a hair salon near Pittsburgh shuttered by the coronavirus, she’s eligible for help from several programs created by the massive federal stimulus package. Choosing between them, though, meant making high-stakes decisions, in a matter of days, with incomplete information.

“I’m very confused about the whole process and what my options are,” Koshinky said. “I wish it was like, ‘Pick (a) or (b): Would you like vanilla or chocolate ice cream?’”

Self-employed people like Koshinsky can apply to programs targeted toward business owners or those aimed at helping workers. Some don’t realize they might qualify for federal business loans, even if they don’t have any employees. Others are wary of taking on debt at such an uncertain time, even debt that could be forgiven.

And still others are betting their best hope is unemployment, a benefit recently expanded to self-employed workers and independent contractors under the stimulus but unavailable until the state opens a separate application system.

» RSVP NOW: Join Spotlight PA for a free virtual Q&A on how Pa. small business owners can navigate the coronavirus shutdown. Our expert panel will answer your questions and provide practical tips for success from 10-11 a.m. Friday.

Much of Pennsylvania’s economy ground to a halt in mid-March after Gov. Tom Wolf ordered a statewide shutdown of all but “life-sustaining” businesses in an effort to contain the coronavirus. Now, Pennsylvania’s smallest small businesses — one-person operations — are desperate for help and must make major financial decisions quickly, even as the fine print of some programs is still coming into focus.

“It’s kind of a bird-in-the-hand situation,” said Terri Johnson, a certified public accountant in Hollidaysburg. “People are desperate for cash at this point so they’re kind of having to take whatever comes the fastest.”

Last week, Koshinsky applied for a Paycheck Protection Program loan, the centerpiece of the federal relief package. She needed money quickly and the program offers federally-guaranteed loans that can be completely forgiven, as long as three-quarters of the money is spent on payroll — in Koshinsky’s case, on herself.

She didn’t realize, though, that if she wants the loan to be forgiven, taking it could undercut her ability to file for unemployment, which might bring her more money.

“It’s the responsibility of the people taking the funds to make sure they’re not double-dipping,” said Timothy Keohane, director of the Penn State Small Business Development Center.

Applications for Paycheck Protection Program loans were considered on a first-come, first-served basis. Self-employed people weren’t able to apply until a week after other businesses, putting them at a disadvantage. They had just four days to apply before the $349 billion program ran out of money, on Thursday morning.

Overwhelmed by demand, some banks have given existing customers priority for the loans, leaving some business owners hanging. A proposal to add another $250 billion to the program has so far stalled in Congress.

Those waiting to file for the new unemployment assistance, meanwhile, have watched anxiously as the existing system has been strained by an unprecedented flood of new claims, with complaints of weeks-long delays, constantly busy phone lines, and unanswered messages. One in five Pennsylvanians have now filed for unemployment, according to new numbers released Thursday.

For gig workers, the self-employed, and independent contractors — who are now all newly eligible for unemployment under the federal CARES Act — the state has to build a new application system to allow them to access the benefits.

Pennsylvania will start accepting applications for the expanded unemployment benefits within a week, Penny Ickes, a spokesperson for the state Department of Labor & Industry, said Wednesday, adding that the federal government only released guidance for states on how to administer the new system the week prior.

Christina Smith, a professional photographer in Adams County, checks the state Department of Labor & Industry website every day — sometimes two or three times — to make sure she hasn’t missed it.

Valerie Shoemaker, who runs a dog and cat grooming business out of her home in Walnutport, is worried about getting her claim in as soon as the new portal opens, anticipating that the system will be overloaded.

Megan Wollerton — a personal trainer based in Butler County who has gone from seeing about 30 clients a week, in person, to around six, virtually — scours social media for updates.

“I’m on like every alert that you can get,” Wollerton said.

The coronavirus outbreak came just as she was preparing for the usual April surge of new business, as people start to get in shape for the summer. “I’m completely in limbo,” she said. When her son turns two, in June, she’s not sure she’ll be able to afford a gift.

Some states that have already opened unemployment for self-employed people and gig workers, such as New York and New Jersey, require people to file for regular unemployment, and be found ineligible, before they can receive the new benefits.

Pennsylvania is skipping that step.

When unemployment benefits do arrive, they will be bolstered by an extra $600 a week, another piece of the $2.2 trillion federal stimulus package signed into law March 27.

For self-employed people without any workers, unemployment is probably a better bet than a federal loan because it offers more money for a longer period of time, and doesn’t come with the hassle of documenting expenses to ensure the loan is forgiven, said Eric Wenger, a CPA and managing partner at the Lancaster office of RKL, a national accounting firm.

“It would be nice to have something in extraordinarily plain English that says: ‘By the way, you can’t do both,’” Wenger said. “People are sort of at this crossroads.”

Sometimes, choosing between the various programs available has simply been a question of what was available earliest.

Becca Parrish, who single-handedly runs a bakery out of her basement in Altoona, applied April 1 for the first thing she found that offered help — a $10,000 emergency grant from the Small Business Administration. She still has not received any money.

The agency originally said applicants would get the money within three days, a promise it has not been able to keep as the program has buckled under a crush of demand. Parrish said she doesn’t want to take on debt or risk double-dipping across programs. For now, she said, unemployment seems like her only hope.

Demand for her scones, cupcakes, and macarons dried up after her major customer, a local coffee shop, closed. She worries that, even once businesses can reopen, people will trim their spending and buying baked goods will be an obvious place to cut back.

Plans to remodel her house have been shelved. She can’t get a job in a business that’s still open, she said, because childcare would be too expensive. And although she wants to support local restaurants, takeout food has become an unaffordable luxury.

100% ESSENTIAL: Spotlight PA provides its journalism at no cost to newsrooms across the state as a public good to keep our communities informed and thriving. If you value this service, please give a gift today at spotlightpa.org/donate.

The pandemic campaign: An unexpected challenge, and a mixed blessing for Pa. political underdogs