Contact tracing involves a painstaking process of identifying and reaching out to all of a COVID-19 patient's recent contacts. In Ireland, Irish Army cadets assist with the contact tracing work in Dublin.

April 14, 2020 | 9:39 AM
With our coronavirus coverage, our goal is to equip you with the information you need. Rather than chase every update, we’ll try to keep things in context and focus on helping you make decisions. See all of our stories here.

When the call came from the local health department in northeast Nebraska, Katie Berger was waiting. She had already gotten a text from the salon where she’d gotten her hair done recently, telling her that one of the stylists had COVID-19. She knew she was at risk.

“They said, ‘We’re calling to inform you that you were exposed to a COVID-19 patient,’ ” Berger says. “It was still pretty scary getting that call, even though I knew it was coming.” The public health official told her to monitor her temperature and watch for possible symptoms until two weeks after the haircut — April 17. Berger’s been staying at home since that call, hoping her quarantine will end uneventfully.

This process is called contact tracing. It’s been a critical tool to control the spread of infectious diseases for decades. Now, public health leaders are calling for communities around the country to ramp up capacity and get ready for a massive contact tracing effort to control the coronavirus.

Here’s a guide to the basics of the process, and how it could help society restart after the current wave of coronavirus cases peaks.

Identify and isolate: How to stop infection from spreading

Contact tracing is a process designed to halt the chain of transmission of an infectious pathogen — like the coronavirus — and slow community spread.

When someone tests positive for an infectious disease they become a “case.” Public health workers then reach out to the case, first of all to make sure they have what they need and that they themselves are self-isolating, and then to figure out who they had contact with who may be at risk of infection, too.

“The whole point of this process is to make sure that people who have the virus are separated from those who don’t,” says Josh Michaud, associate director for global health policy at the Kaiser Family Foundation. “That includes the original case, who’s isolating, and the contacts who might be incubating the disease. If you get them to self-quarantine before they are infectious, then you’ve essentially stopped the transmission of that disease from that transmission train. If you do that with enough contacts, then you’ve effectively interrupted community transmission.”

It’s not perfect — a tracer might not be able to reach all the contacts, and those contacts might not all follow the guidance, says Dr. Jeff Engel, senior adviser for COVID-19 to the Council of State and Territorial Epidemiologists. “But even the leaky quarantine is effective,” he says. “If you get 85% of contacts to self-quarantine for 14 days, you’re going to do a lot in the community to decrease transmission.”

Step one: Sleuth out all the patients’ contacts

If you’re picturing being put under a spotlight and grilled about where you were and who you were with, put that image aside. It’s not usually so dramatic.

A public health worker will typically call the patient who tests positive and have a straightforward — and hopefully empathetic — conversation, says Engel, requesting that they help the health department piece together a list of their recent contacts.

For a hair stylist who tests positive, that might involve pulling up a list of everyone who had hair appointments while that stylist was at work, as was the case with Berger. But it can get much more complicated than that. One COVID-19 patient described to the LA Times how he had to reach out to at least a dozen contacts after he attended a conference before everything shut down. It can mean going through your social media posts, your emails or your calendar, trying to piece together who you were close to.

“With some cases, there might not be a contact history — maybe they haven’t left their house, maybe they haven’t come in contact or been exposed or have exposed anybody else,” Michaud says. On the other hand, he says, there can be dozens or even hundreds of contacts to follow up with.

After the list is made, public health workers do outreach to those contacts, which can be brief and to the point. Berger says her call with the public health department took just a few minutes: “They just told me to monitor symptoms until April 17th.”

The guidance for each contact may also vary depending on how high risk the contact was. If you were very close to a coughing person for an hour, you may be asked to self-quarantine for 14 days. If you were just in the same room as someone who was mildly symptomatic for 20 minutes, you might just be asked to self-monitor for symptoms.

Receiving calls from a government official about your health can be nerve wracking. Public health officials have learned lessons from contact tracing sexually transmitted diseases like HIV and syphilis, Engel says, to talk to people in a way that’s not stigmatizing, and will encourage people to get on board with the request to self-isolate or share their contacts.

Finally there’s follow up, and some information about what to do next. Berger says she was told “if anything changes, or if I develop symptoms, to either call them or to call my primary care physician,” she says.

Michaud says if someone who’s in quarantine does develop symptoms, the health department will want to make sure to get them tested.

Contact follow up can be rigorous in some countries. In South Korea, for instance, MIT Technology Review reports that each person in quarantine is assigned a government case officer who checks in twice a day, and a smartphone app notifies that officer if the contact leaves their quarantine area. 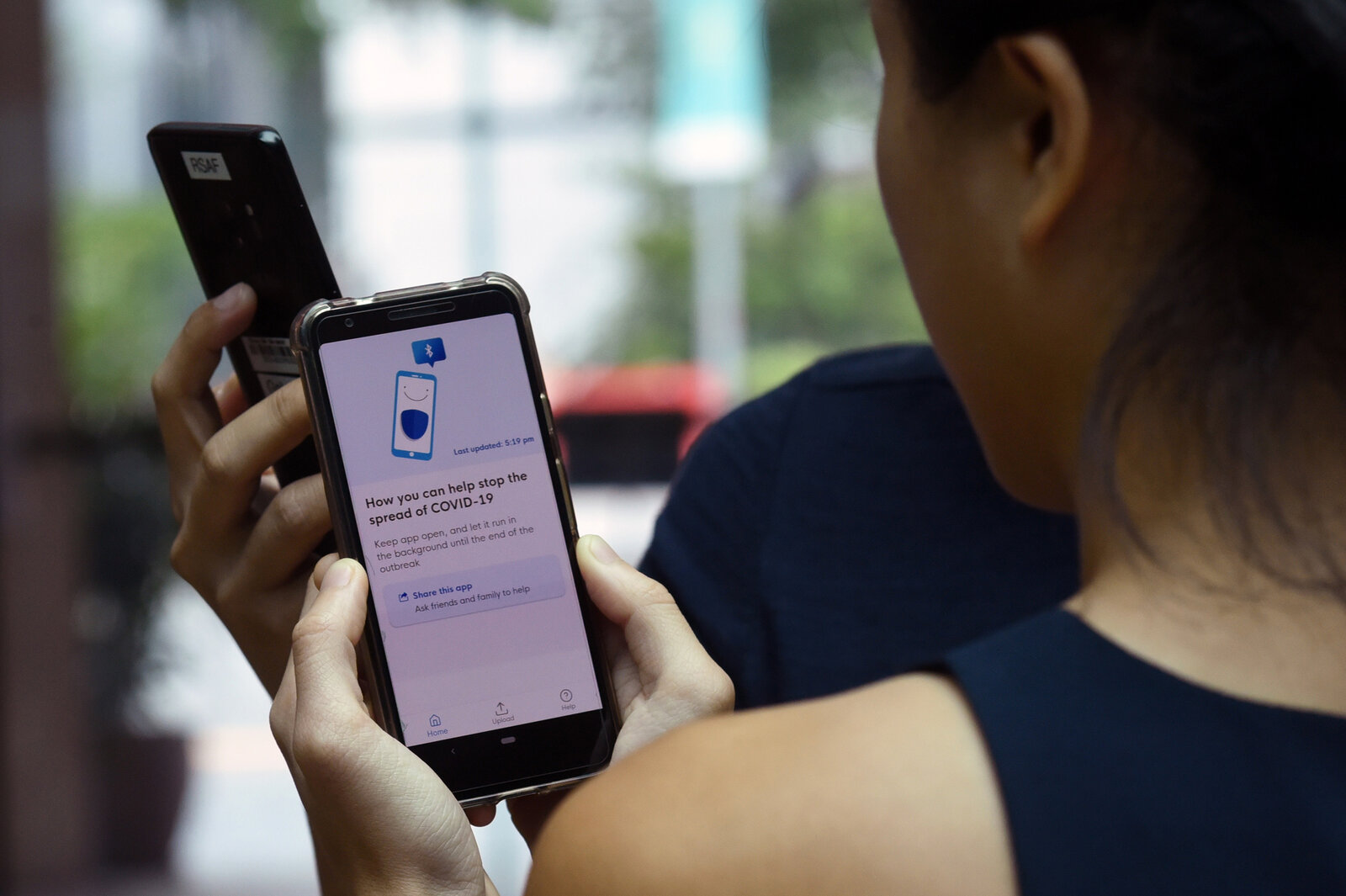 Smartphone apps can be used to help streamline the work of contact tracing. In Singapore, the government uses an app called TraceTogether. But in the U.S. privacy concerns could hamper such an approach. Catherine Lai/AFP via Getty Images

According to the Centers for Disease Control and Prevention’s current recommendations, contacts include household members, intimate partners, those caretaking COVID-19 patients in a household, and anyone who’s had close contact (six feet or closer) “for a prolonged period of time.”

Those guidelines note that the longer a contact was exposed to the patient, the greater their exposure risk. And if the patient who tested positive had symptoms like coughing or if they were wearing a mask which can block some respiratory droplets, these things also affect risk level.

“The rule of thumb is that you were within six feet of a person,” Engel says. “But the variable that has everyone a little bit stumped is that time element. Should it be 30 minutes at six feet or should it be more like 10 minutes? There’s some controversy about that, and the science is still emerging.”

How contact tracing could help the country open up

Health officials have zeroed in on widespread testing and contact tracing of positive cases as key tools for the U.S. to be able to begin to return to normal life.

The broad social distancing measures in place now for most of the country are a kind of mass quarantine — in contrast, contact tracing can allow a more targeted group of people to quarantine while the rest of society begins to open up, Engel says.

Right now in hotspots like New York City, contact tracing isn’t really happening. “It’s just not feasible to take in literally thousands of new infections a day that are being discovered in the community — the workforce isn’t there,” Engel says. But “when the numbers begin to become more manageable,” he says, contact tracing will be key to end the lockdown.

In other words, says Michaud, contact tracing is especially helpful at the flatter ends of the epidemic curve — at the beginning, and after the peak as case counts go down.

Since the epidemic isn’t affecting all places equally, in a place like Utah, where the case count is much lower than New York City, contact tracing is feasible and happening now.

Testing is an important piece of the puzzle, too, Michaud notes. “If you’re not identifying most or all the cases, then contact tracing is going to be missing a lot of transmission,” he says, and quick and widespread testing is still a major problem in the U.S.

There are currently 2,200 contact tracers across the country, according to a letter the Association of State and Territorial Health Officials recently sent to Congress.

Recently, there have been calls to massively increase the number of people doing this work to meet the need during the coronavirus pandemic.

Massachusetts is launching a state-wide effort, hiring 1,000 contact tracers in partnership with Partners In Health, an international health nonprofit with experience in the developing world. Qualifications include a high school diploma or equivalent, the ability to speak and write in English, and the “ability to show empathy to distressed individuals.” San Francisco has also been scaling up its contact tracing workforce.

Dr. Howard Markel, director of the Center for the History of Medicine at the University of Michigan, notes that these efforts are a kind of return to the way things were in the 20th century.

“They had very large departments of health in every city and they had many workers that ranked all the way from doctors who ran things and public health nurses and social workers, but also contact trace workers,” he says. “As a public health budgets were cut — beginning in the 1980s and almost every year since — that has fallen by the wayside.”

To open up the country safely with the coronavirus still spreading, a recent report from the John Hopkins Center for Health Security calculates that we may need in the ballpark of 100,000 contact tracers.

A place for smartphone surveillance?

There are some promising apps that take advantage of the tracking device many of us carry around already: our smartphones. Some apps use Bluetooth to notify you if you’ve been close to someone who tested positive. Others allow contact tracers to work more efficiently, for instance, by automating follow up for contacts who are in quarantine, asking if they have any symptoms, etc.

But there are privacy concerns there, and many apps are still in development and need further testing. In the meantime, old fashioned phone calls still work.

How runners can keep themselves and others safe during the pandemic