April 10, 2020 | 11:00 AM
Updated: April 10, 2020 | 7:44 pm
With our coronavirus coverage, our goal is to equip you with the information you need. Rather than chase every update, we’ll try to keep things in context and focus on helping you make decisions. See all of our stories here.

(Harrisburg) — Gov. Tom Wolf predicted Friday that Pennsylvania will see a surge in new virus cases next week and implored residents to continue to self-isolate to get the worst of the pandemic behind them and allow the state’s economy to gradually open back up.

“If the surge occurs next week, as we suspect it will, and it’s within the range of the capacity of our health care system, that’s going to allow us to shut this shutdown down fast, faster than if this drags on,” Wolf told reporters on a conference call.

Modeling from the University of Washington suggests that Pennsylvania could hit a peak in hospitalizations and deaths late next week before the numbers gradually drift down through the middle of May. Wolf’s health secretary, Dr. Rachel Levine, said there won’t be one peak, and that different regions of the state will peak at different times.

Philadelphia and its suburbs as well as several counties in northeastern Pennsylvania have been hit particularly hard by COVID-19.

Mark Roberts, director of the Public Health Dynamics Laboratory at the University of Pittsburgh, which is doing its own virus modeling, warned Friday that a peak doesn’t mean that Pennsylvania is out of the woods. He said the numbers could very easily spike again if people leave their homes and businesses open up too quickly.

“What I worry about is this notion that, ‘Oh, we’ve hit the peak, we’re finished, we’re done,’” Roberts told The Associated Press.

The state’s mitigation measures, including the indefinite shuttering of schools and nonessential businesses and Wolf’s order for people to remain at home, have helped slow the virus’s spread and make the pandemic more manageable for the health care system, according to Levine.

The Department of Health reported over 1,750 new cases Friday, bringing the statewide total to about 20,000. There were 78 new deaths, tying the previous single-day high, for a statewide toll of 416.

Since the first cases were reported in central Pennsylvania on March 13, a total of 2,619 people in the region have tested positive for the virus.

The first coronavirus-related deaths in this region were reported about two weeks later, on March 28. In the 13 days since, a total 47 central Pennsylvania residents have died from COVID-19 or related complications.

Today’s update includes four new deaths in Berks County, four in Lancaster and one in Lebanon.

Wolf authorized the early release of as many as 1,800 inmates from Pennsylvania state prisons in an effort to minimize the spread of the coronavirus.

The plan is similar to what other states and some Pennsylvania counties have undertaken or considered, and it comes after talks broke down with Republican lawmakers who hold a majority in the state Legislature. 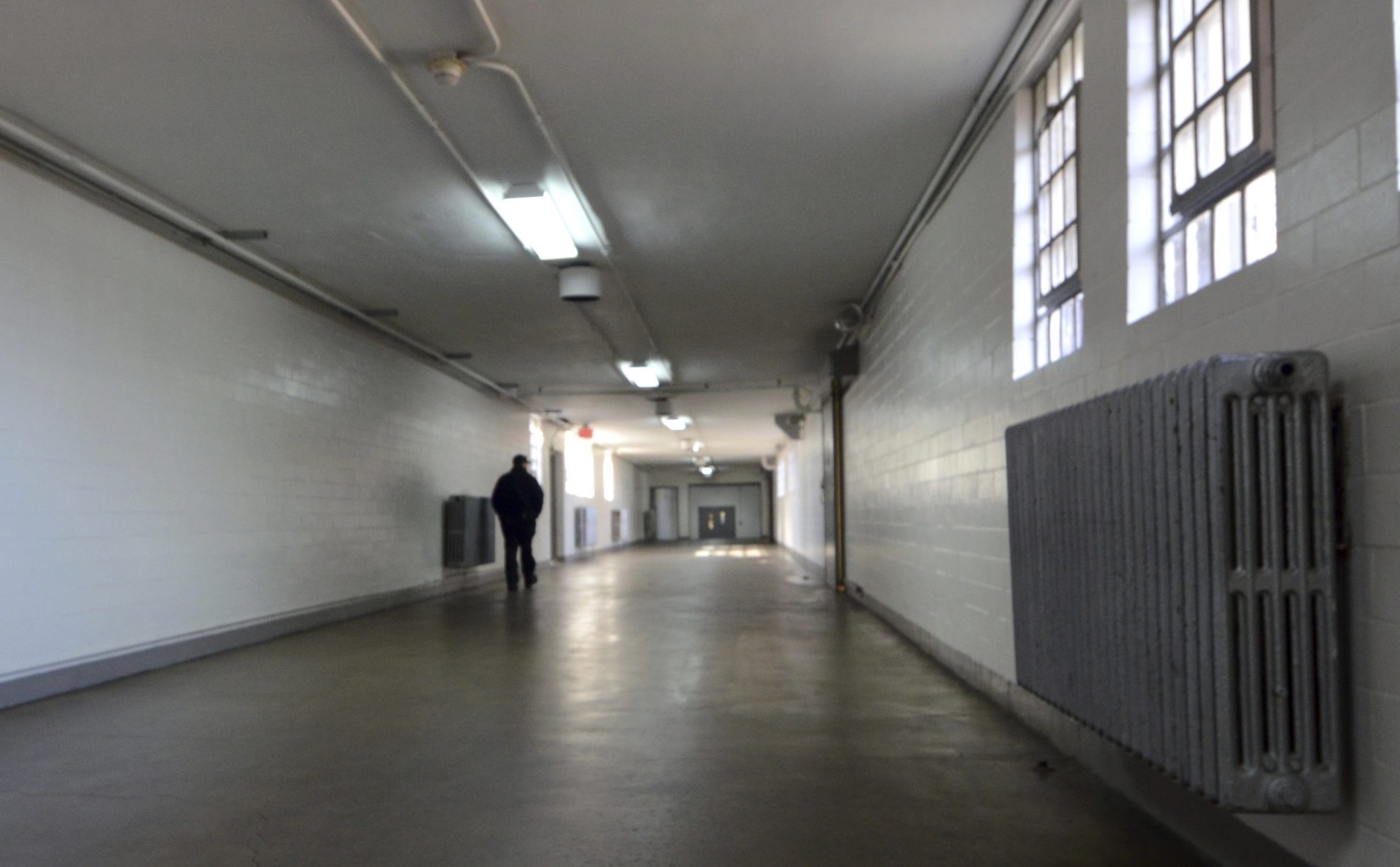 A corrections officer walks down a hallway in a building at the State Correctional Institution at Camp Hill, Pennsylvania, on Jan. 13, 2017, in Camp Hill, Pa.

“We can reduce our non-violent prison population and leave fewer inmates at risk for contracting COVID-19 while maintaining public safety with this program,” Wolf, a Democrat, said in a statement.

The releases, to halfway houses or home confinement, could start as early as Tuesday, according to the governor’s office.

The plan allows the release of inmates serving time for nonviolent offenses who are within nine months of scheduled release, or within 12 months for those considered at heightened risk from the virus.

Pennsylvania’s state prisons hold about 44,000 inmates. The Wolf administration said approximately 1,500 to 1,800 inmates are eligible, although some may not be able to be released because of challenges involving housing, health care or behavioral health treatment.

House Republican leaders had sought to cap any release of inmates at 450.

Wolf’s executive order said the Department of Corrections will discuss each eligible inmate with the courts and prosecutors.

Inmates given reprieve are to be monitored similarly to parolees and supervised by parole agents, the administration said. They would return to prison to complete any remaining portion of their sentences when the order expires, it said.

The Wolf administration has disclosed that 11 inmates at Phoenix state prison, in Montgomery County, have contracted the virus.

The prison system has been on inmate quarantine since March 29, with inmates being fed in their cells and all movement being controlled to achieve social distancing.

The GIANT Company partnered with Team Pennsylvania to establish a $250,000 emergency grant program meant to support small businesses in the food supply chain impacted by the pandemic.

Pennsylvania businesses involved in growing, making or processing food can apply for the program through April 24. Grant recipients will be notified in early May.

At least four meat processing plants in Pennsylvania are shut down, including one facility outside the hard-hit city of Hazleton, where more than 160 workers have tested positive, according to a union official.

Cargill Meat Solutions, which employs about 900, has been closed since Tuesday. The 230,000-square-foot plant in Luzerne County packages beef and pork products destined for supermarket meat cases.

“We are applauding the efforts of these four employers to close these facilities. That’s the safest thing for our members,” said Young, whose union represents workers at the plants.

Young said a beloved shop steward at the JBS plant, Enock Benjamin, had succumbed to the virus after spending weeks “doing everything he could to keep everyone safe.” 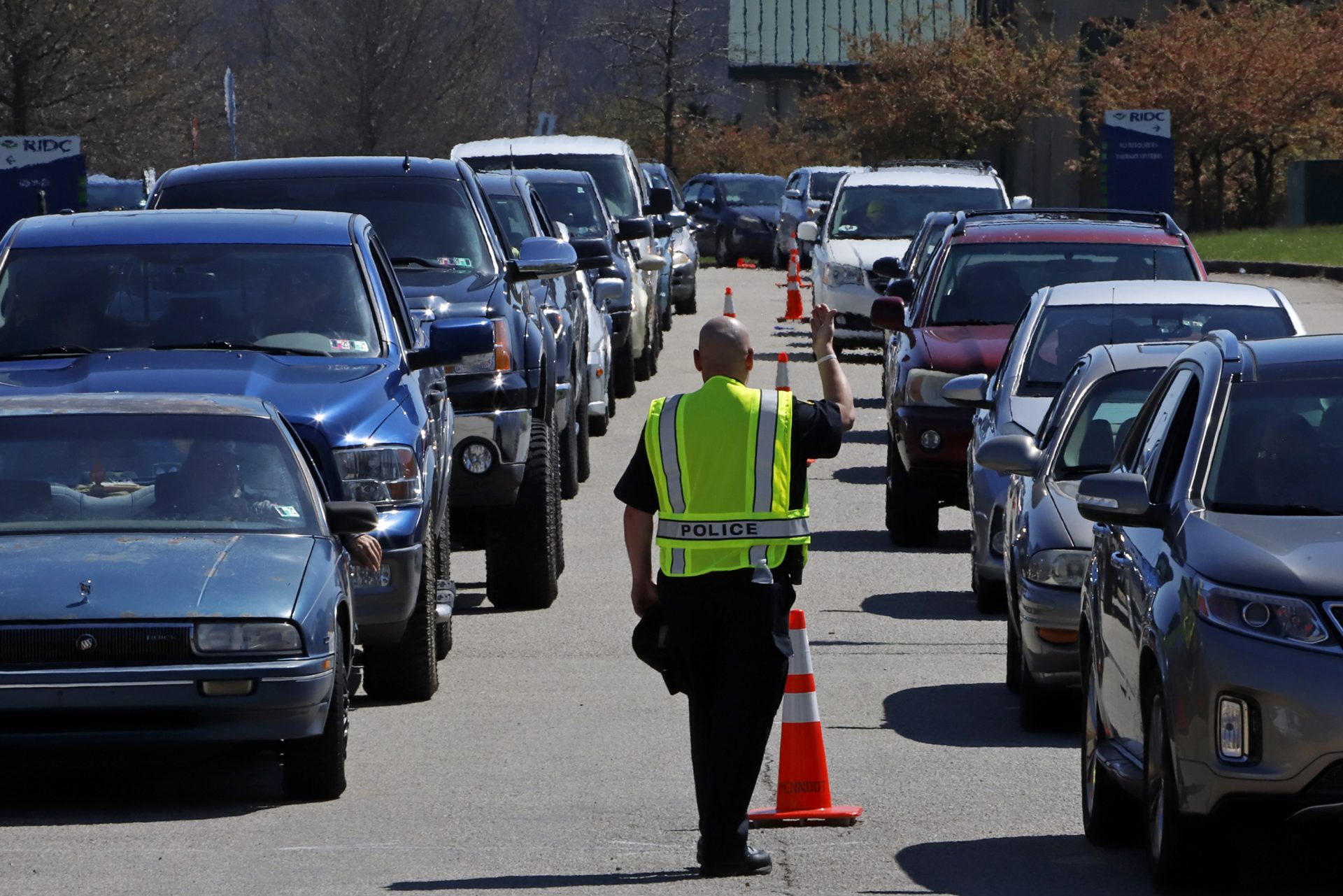 A Duquesne, Pa, Police officer directs a double line of cars, stretching over a mile at times, in a queue waiting to pick up two boxes of food outside the Greater Pittsburgh Community Food Bank in Duquesne, Pa., Monday, April 6, 2020. The COVID-19 pandemic has triggered a 543% increase in people coming to the food bank directly for food, according to the food bank’s website. (AP Photo/Gene J. Puskar)

Motorists lined up for over a mile for emergency groceries offered Friday at a drive-up site run by a Pittsburgh food bank.

The Greater Pittsburgh Community Food Bank planned to distribute two boxes of food to each vehicle, enough to make 40 meals. The food bank said it could offer help to 1,300 people at the three-hour event at PPG Paints Arena.

Aerial footage from KDKA-TV showed a long line of cars stretching over a mile. Long lines have been routine at emergency food giveaways held across the region in recent weeks.

Many people are seeking help for the first time, Charlese McKinney, a director at the Great Pittsburgh Community Food Bank, told KDKA, calling the need troubling.

“They had jobs, they were able to care for their families, but their hours have been reduced or their jobs have been furloughed for a time being,” McKinney said.

Friday’s event was co-sponsored by the Pittsburgh Penguins and Pittsburgh Police Department.

After granting the federal government a three-day delay, a federal judge has gone ahead with his order to release 22 immigrant detainees considered to be at “imminent risk of death or serious injury” from COVID-19.

Friday’s ruling affects 20 detainees in U.S. Immigration and Customs Enforcement custody at jails in York and Pike counties. Two of the detainees had already been let go.

Judge John E. Jones ordered the remaining detainees to be released from civil detention pending further action from the court or until Wolf lifts his COVID-19 state of emergency order.

Jones ordered detainees to self-quarantine for two weeks and said they could be taken back into custody if they abscond or commit a crime.

This runner was a favorite for the U.S. Olympic team. Then came the coronavirus pandemic