New guidance says surgical face masks should be used rather than the more protective N95 respirators in most situations.

Most Pa. hospitals expect to burn through mask supplies within a week

“I’m afraid these potential shortages are real, and that’s why it’s so important to do everything we can to reduce the number of people who would need them." 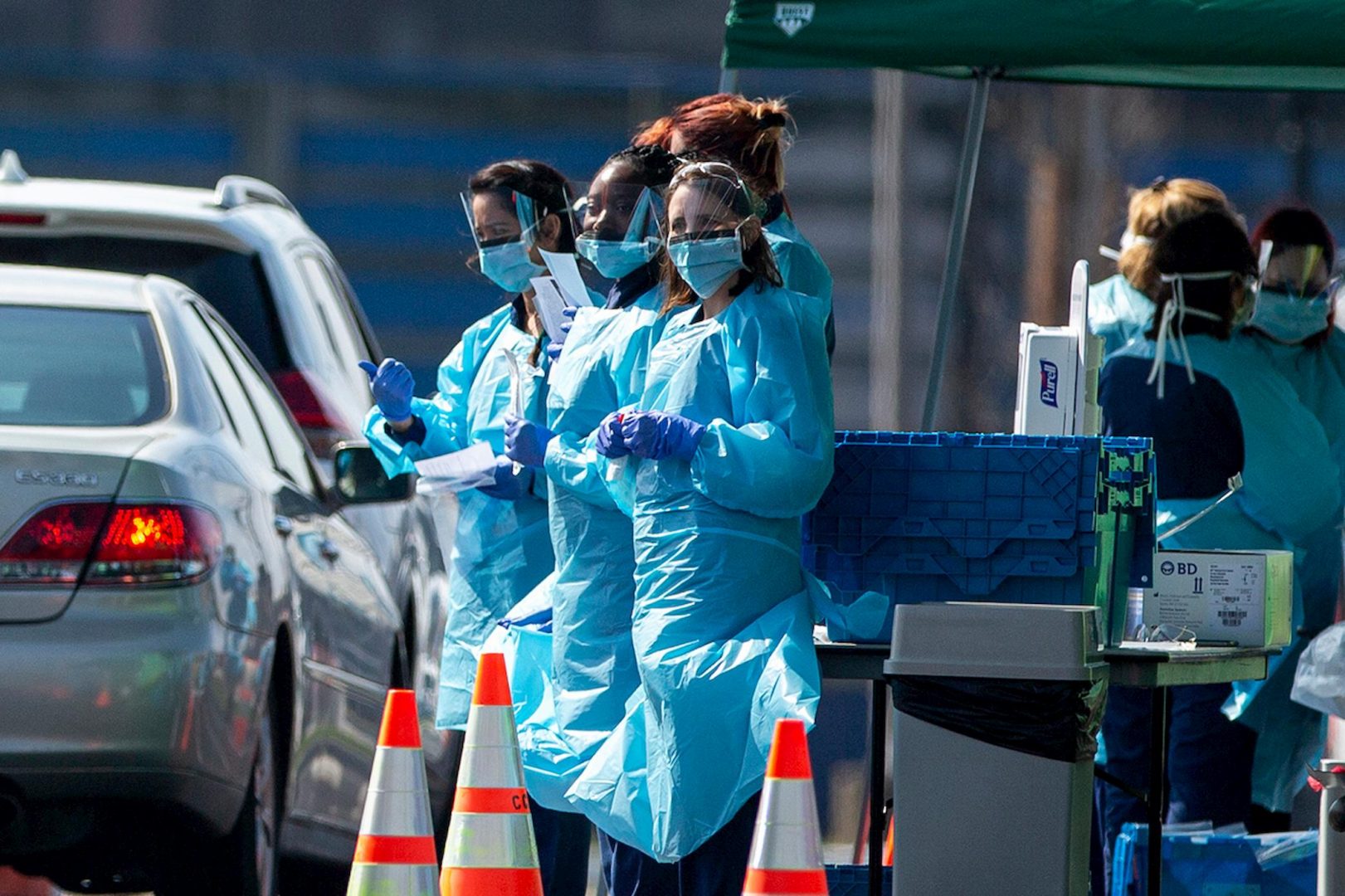 New guidance says surgical face masks should be used rather than the more protective N95 respirators in most situations.

(Philadelphia) — The latest figures from the Hospital Association of Pennsylvania indicate that 85% of hospitals in the state expect to run out of the highly protective N95 masks in the next four to seven days. Forty-one percent expect to run out within three days.

“I’m afraid these potential shortages are real, and that’s why it’s so important to do everything we can to reduce the number of people who would need them,” said Andy Carter, president and CEO of the hospital association.

More than 80% of the state’s hospitals expect to run out of other personal protective equipment (PPE)  — such as thinner surgical masks, gloves and gowns — in the next four to seven days.

Fewer masks mean more doctors and nurses becoming infected, and more strain on the medical system as COVID-19 hospitalizations ramp up throughout the state.

“The worst-case projections anticipate a number of patients that would far outpace the supply of clinical professionals,” said Carter.

Hospitals and long-term care facilities are already skimping on supplies in ways that nurses say make them feel unsafe.

In her 20 years of nursing, Julie Moore has never seen so many patients die as at Care Pavilion, a long-term care facility in West Philadelphia. Moore, a certified nursing assistant, said  seven or eight people she’s known for years have died on her unit alone. 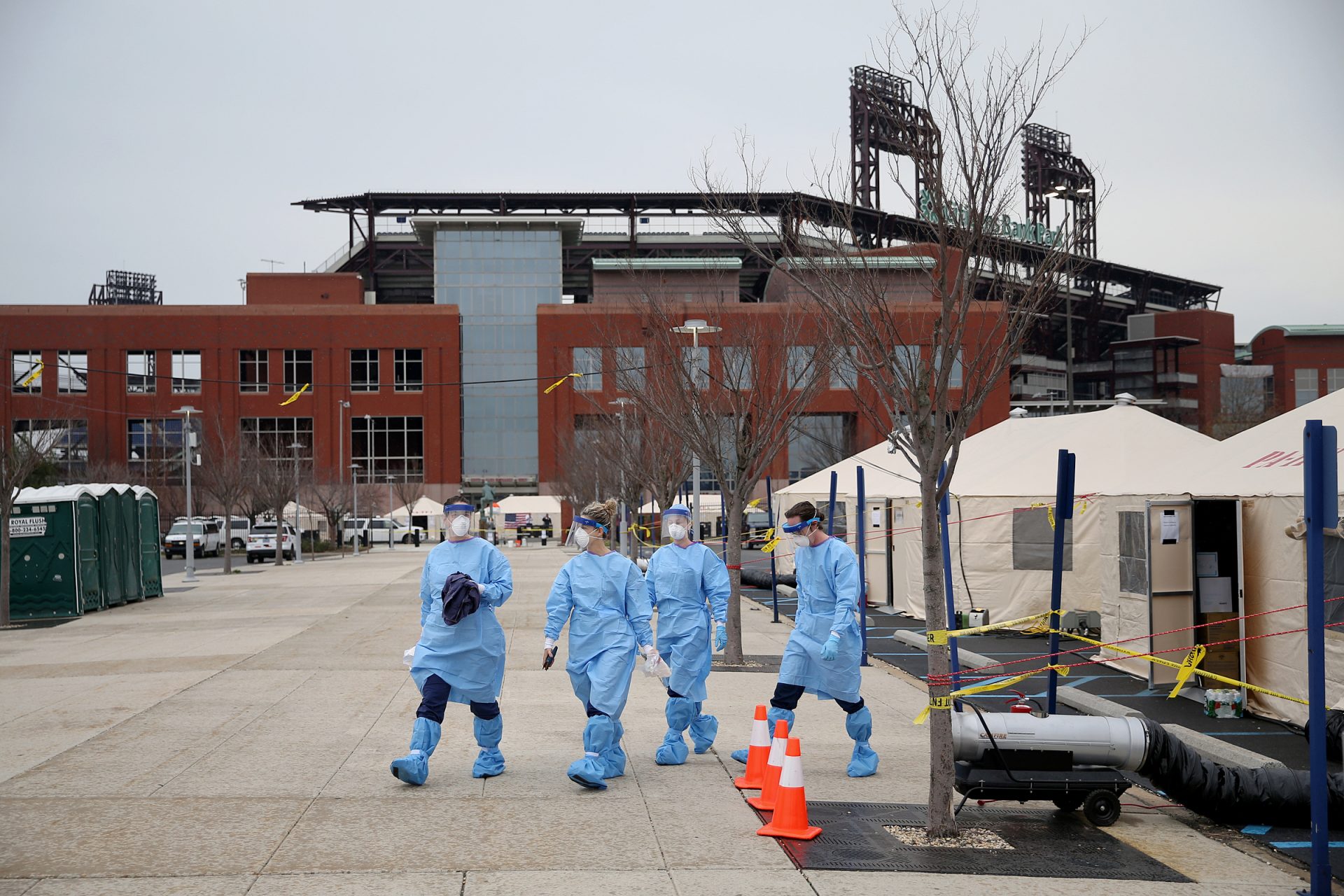 Philadelphia Medical Reserve Corps volunteers (from left) Megan Boyle, Marina Spitkovskaya, Jamie Huot, and Stephen Bonett, all of whom are nurses, walk to the swabbing tent as the city’s coronavirus testing site prepared to open next to Citizens Bank Park in South Philadelphia on Friday, March 20, 2020. The site, which opened Friday afternoon, is the first city-run location where people can be swabbed to determine if they have the coronavirus. At the time of opening, it was only for people with symptoms who are over 50 and healthcare workers with symptoms.

“They’re dying every day, and we can’t help them, and they’re looking at us to help them,” said Moore.

Without the proper gowns, masks, face shields and gloves, Moore feels like she and her colleagues function to spread the disease.

“Us coming from the outside and coming on the inside, we’re infecting them,” she said of her patients. “And then we’re getting infected, and we’re taking it home. It is a vicious cycle, and it’s very scary.”

Over the last two days, health care workers across the commonwealth have demanded that the federal government provide the emergency supplies they need to protect themselves on the front lines of the epidemic. The Pennsylvania Association of Nurses and Allied Professionals, which represents more than 8,000 health care workers across the state, is pushing for legislation that would compel factories to produce masks under the Defense Production Act.

The problem is dire at hospitals, where it’s common for nurses to be given one N95 respirator, intended to be worn for a single procedure, to last a week. Elsewhere, the masks are expected to last the duration of the pandemic. Workers are asked to put the contaminated masks in a brown paper lunch bag between uses. Often, they disinfect them between uses with an ultraviolet light, a process approved by the Centers for Disease Control and Prevention during the coronavirus crisis, but not recommended as a standard of care because it has not been proved to effectively decontaminate the masks. 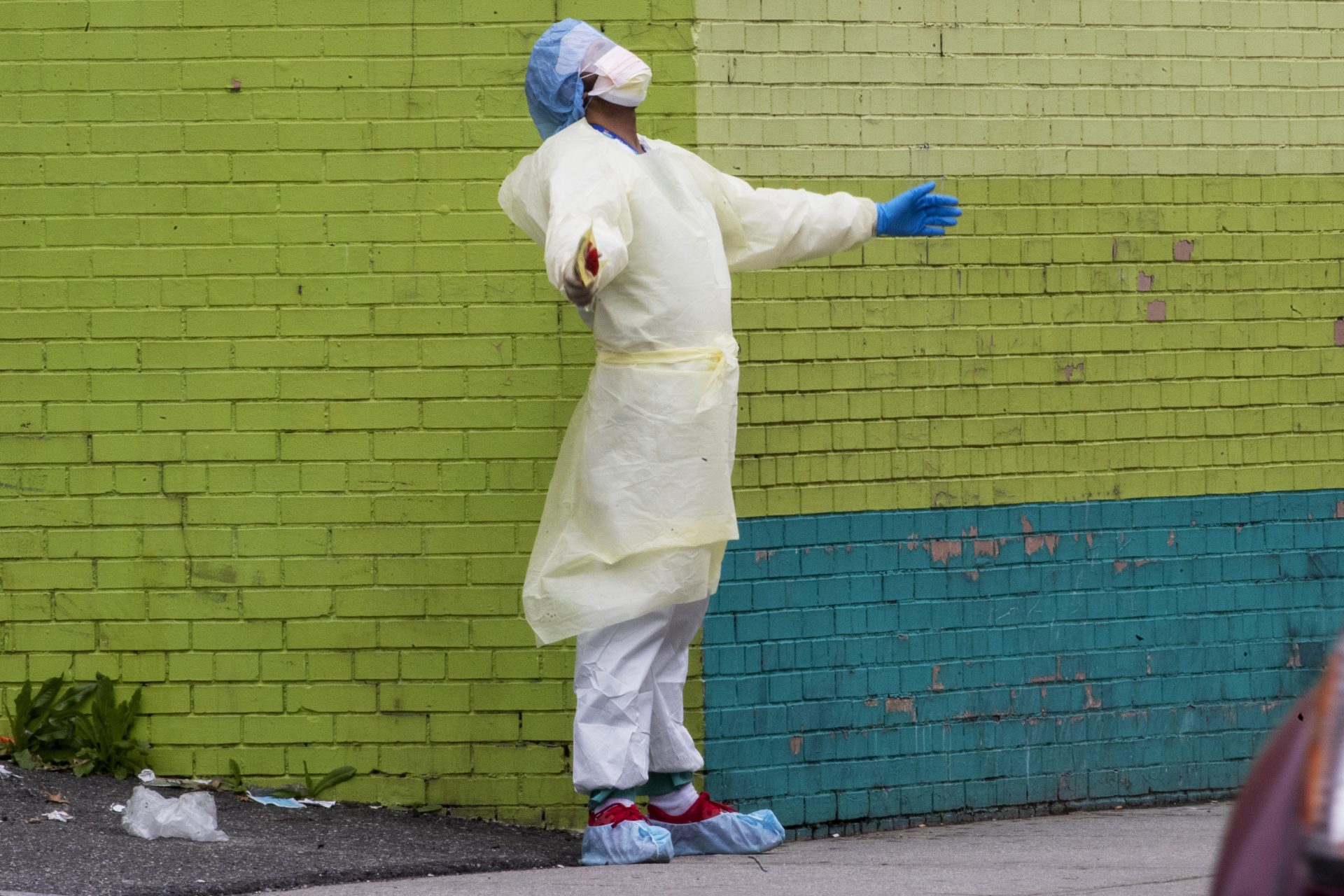 A medic of the Elmhurst Hospital Center medical team reacts after stepping outside of the emergency room, Saturday, April 4, 2020, in the Queens borough of New York. The new coronavirus causes mild or moderate symptoms for most people, but for some, especially older adults and people with existing health problems, it can cause more severe illness or death.

Because many nurses don’t trust that their reused N95 masks are, in fact, protecting them, they end up double-masking, wearing a thin procedural mask underneath. Some report working for 12-hour shifts without eating or drinking, to avoid handling the contaminated masks and putting them back on.

“Everything that is evidence-based practice is gone out the window,” Francine Frezghi, a registered nurse at Temple said.

Peg Lawson, a nurse at Einstein Hospital, said that before the pandemic, nurses would have been disciplined if they’d been caught handling their gear the way they are being encouraged to now.

“I’ve been doing this for 30 years, and I’m terrified,” said Lawson, who said it has also been difficult for nurses exposed to the virus to get tested if they don’t display symptoms.

Standard safety protocols have been lifted across the board for health care workers.

In an effort to address workforce shortages, CDC director Robert Redfield announced new guidelines on Wednesday that allow health care workers exposed to the coronavirus to return to work instead of quarantining for two weeks. The previous guidance put a significant strain on the already-limited workforce, since those exposed had to rotate out of patient care if they were caring for a patient within six feet for more than 10 minutes without the proper protective equipment.

At Einstein and elsewhere, nurses report caring for patients who weren’t on COVID units without protection. Later, they found out those patients had tested positive for the virus, meaning the workers had been unknowingly exposed.

Under the new guidance, these workers would not be required to isolate. They would need to take their temperatures before going to work, wear face masks, and practice social distancing at all times, but could continue caring for patients.

Philadelphia officials have been working to deliver PPE to frontline workers.

Wednesday and Thursday, a mix of 81,274 face shields, gowns, gloves, procedure and surgical masks were due to be delivered to 55 long-term care facilities. The supplies came from the federal Strategic National Stockpile as well as from donations, according to the city. Distribution was being based on the facilities’ needs and their responses to a Philadelphia Department of Public Health supply survey earlier in the week.

The City of Philadelphia was planning to spend $2.8 million on 500,000 masks from Europe, but the order never made it overseas. Cheryl Bettigole, director of chronic disease and injury prevention at the city Health Department, said another order had been placed and is pending, but that given what happened last time, no one is counting it as a done deal until the shipment arrives.

Pennsylvania received less than a quarter of the 494,392 N95 masks it requested from the national stockpile.

Donations of masks and other equipment have been coming in from a variety of grassroots groups: medical students soliciting extra masks from nail salons and contractors; a group of Chinese Realtors who came together to buy masks and donated them. But those efforts only amount to a drop in the bucket. Temple Health’s hospitals, for example, burn through about 1,500 N95 masks and 10,000 surgical masks a day, according to a spokesperson there.

U.S. Rep. Brendan Boyle, D-Pa., said that because of the global supply shortages, the only way to get frontline workers the protection they need is to compel factories to produce the gear through the Defense Production Act.

“Why the administration has dragged its heels on this is absolutely beyond me,” he said.

The CARES act passed by Congress provided $16 billion for personal protective equipment, but  Boyle said that’s not enough. He has signed on to legislation that would compel federal agencies to purchase 300 million N95 respirator masks, analyze the shortage of PPE as reported by health care workers, and identify a list of industries best positioned to manufacture equipment.

A companion bill is working its way through the U.S. Senate.

NYC could need up to 45,000 additional medical workers this month, mayor says