An employee at the Shop Rite at 24th and Oregon Avenue in South Philadelphia tested positive for the coronavirus, Shop Rite disclosed.

Grocery workers in Philadelphia are getting coronavirus. Will your store let you know?

The stores are a truly “essential” place where all sorts of people have reason to flock. 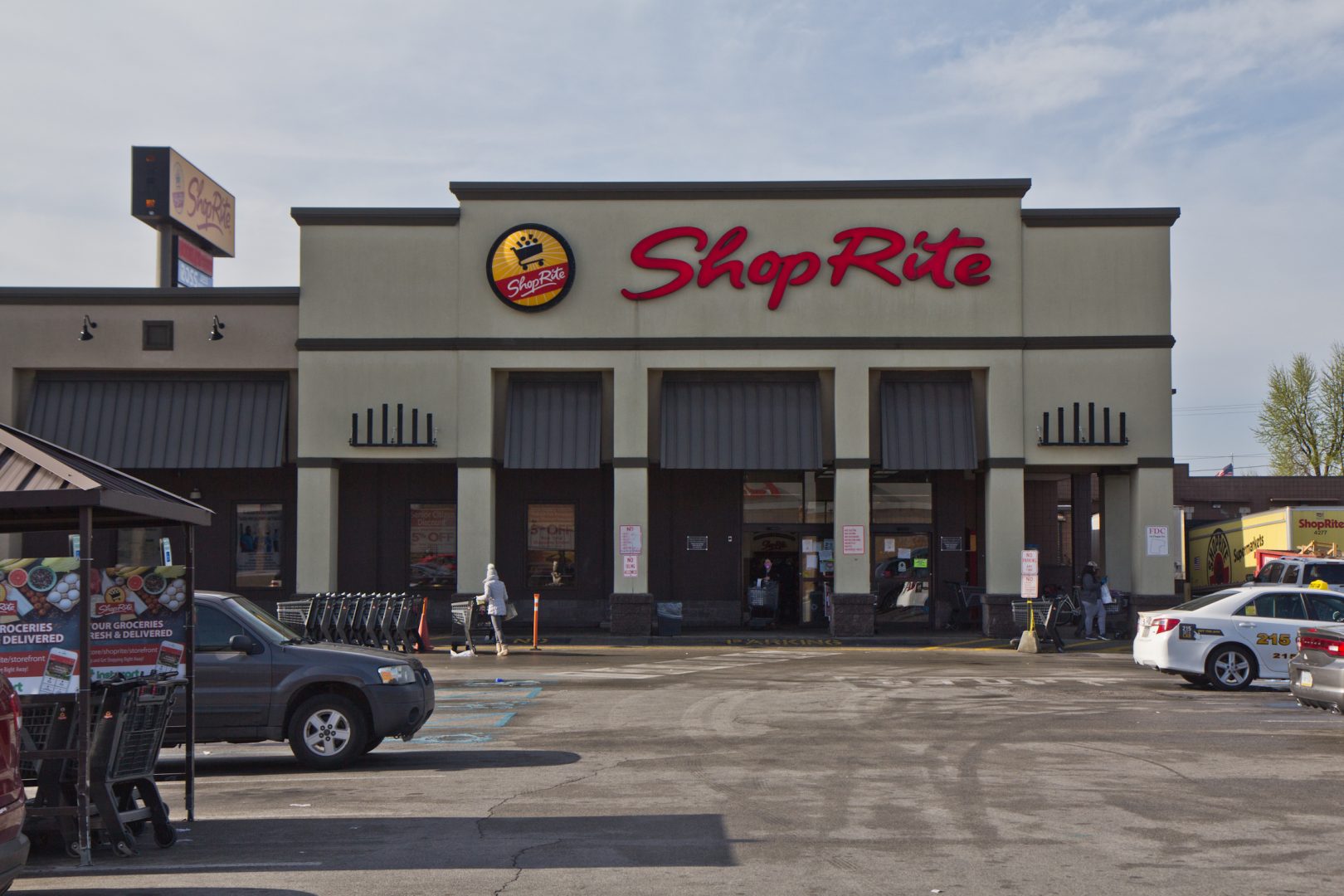 An employee at the Shop Rite at 24th and Oregon Avenue in South Philadelphia tested positive for the coronavirus, Shop Rite disclosed.

(Philadelphia) — Grocery shopping during the coronavirus pandemic can feel like the modern-day equivalent of running a gauntlet.

Outside the ShopRite at 24th and Oregon Avenue in South Philadelphia Wednesday, customers hustled to and from their cars, heads down.

“We’re trying to get in and get out,” said two women, their faces obscured by masks. “You stay safe out here,” they added without giving names as they dashed inside.

Shoppers have reason to be wary.

One of the few public spaces open during business shutdowns, grocery stores are at an epicenter of disease anxiety. It’s a truly “essential” place where all sorts of people — some hardcore hand-washers, some disease deniers — have reason to flock.

Adding to the concern is the fact that grocery store employees, who’ve continued to work during a pandemic that’s sent most of the country into lockdown, are coming down with coronavirus. Across the country, some have started dying from it — pushing store managers to institute new protocols for social distancing as employees agitate for more protections.

This week, this location of ShopRite and a nearby location of The Fresh Grocer in Philadelphia announced on social media that employees had tested positive. The unnamed workers last reported to work on March 29 and April 1, respectively, and their close colleagues have been asked to quarantine for 14 days.

Kim Russell, who is diabetic, waited in the car Wednesday morning while her mom shopped inside during special hours for the elderly. “She’s anxious because she has a compromised immune system as well,” she said. That wouldn’t stop her from going to a different grocery store later, in search of a deal.

Russel appreciated that the store notified customers about a worker with a confirmed case of COVID-19, instead of “hiding it.”

“I just need to know someone was infected and what are you doing about it,” she said.

Paula Coppola of South Philadelphia shrugged when asked about the confirmed case as she loaded goods into the trunk of her car.

“It’s gonna happen all over,”  she said. “We just gotta bear with it.”

While much of the U.S. economy falters, grocery stores are having a big boost in sales and are on a hiring spree. Precautions such as wiping down high traffic areas, marking floors with tape to demonstrate social distancing and marking off special shopping hours for the elderly or disabled are now common pandemic modifications — but disclosing coronavirus cases is not necessarily standard.

Wakefern Food Corp, the parent company behind ShopRite and The Fresh Grocer, says it will continue to make cases public.

“Quite honestly we knew [cases in employees] inevitably would happen,” said Karen Metela, Vice President, Consumer & Corporate Communications at Wakefern. “We believe in customer transparency and the consumer’s right to know.” 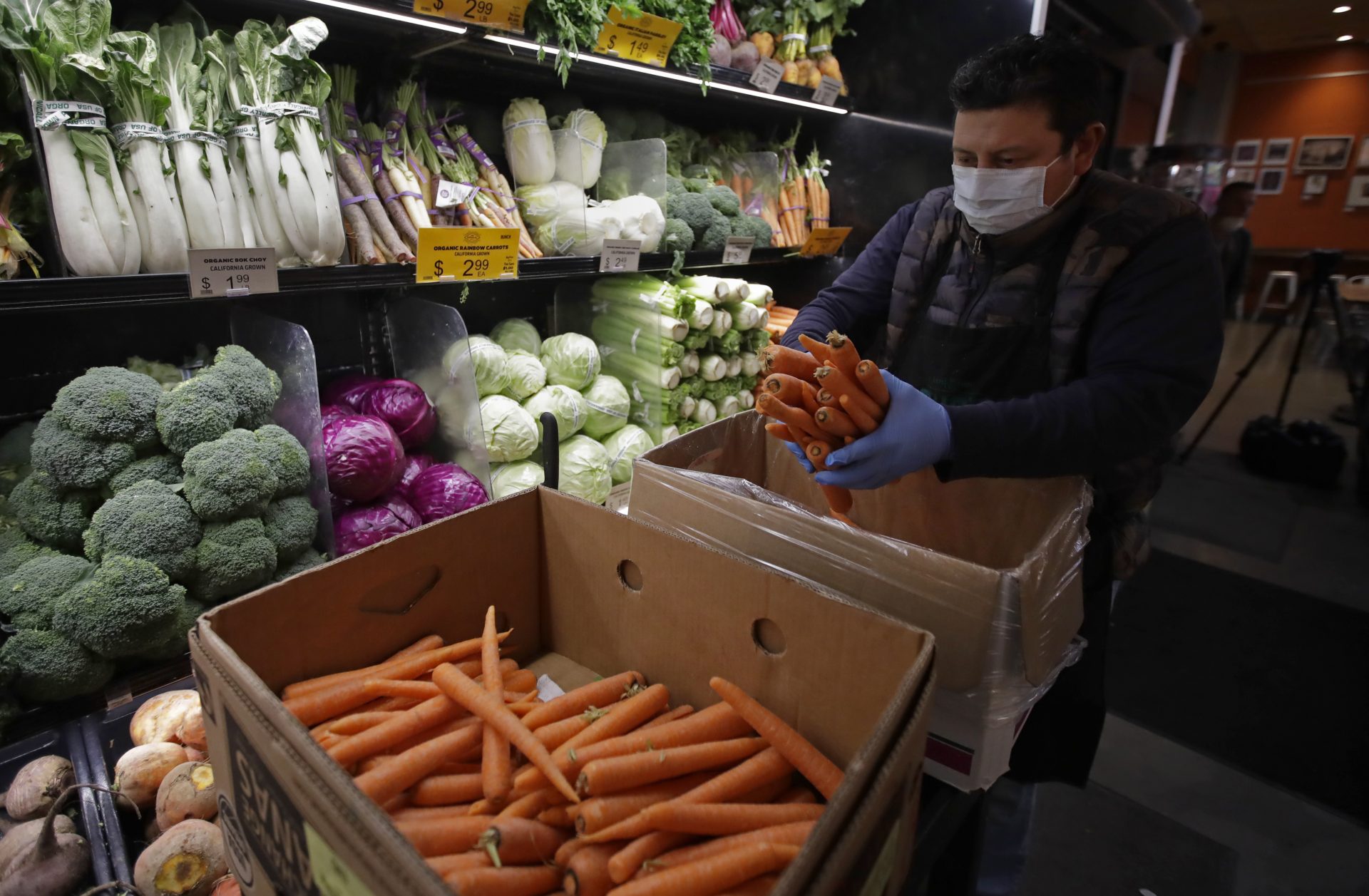 FILE – In this March 27, 2020, file photo, a worker, wearing a protective mask against the coronavirus, stocks produce before the opening of Gus’s Community Market in San Francisco. Grocery workers across the globe are working the front lines during lockdowns meant to keep the coronavirus from spreading. (AP Photo/Ben Margot, File)

Keystone Crossroads reached out to representatives from several of the largest grocery chains in the Philadelphia region, including Wakefern, Albertsons (which owns Acme and Safeway), The Giant Company, Trader Joe’s, Wegmans, MOM’s Organic Market, Whole Foods, and Walmart for more information about their disclosure policies, protections for workers and upcoming changes to shopping protocols. Only Wakefern and Giant responded at time of writing, but some have published updates online.

For instance, Trader Joe’s says it will disclose cases and perform rolling closures of stores to undergo additional cleaning if and when employees contract COVID-19.

Giant supermarket would not commit to disclosing cases of employees contracting coronavirus to the public.

“In the event of a confirmed case, we do share this information with and remain in contact with the appropriate health officials,” said Giant public relations manager Ashley Flower.

In the coming days, ShopRite and The Fresh Grocer will begin limiting the number of people allowed in their stores at once, said Meleta. Grocery store associates will also begin having mandatory temperature checks.

Wegmans in Cherry Hill is also limiting in-store volume. Nationwide, Target announced it would also monitor, and, if necessary, limit the number of customers shopping at one time.

On April 6, Giant began restricting movement to its stores to “a single entrance and exit,” as well as implementing  “one-way aisles and register queuing (directing flow of traffic to register),” said Flower.

States have begun handing down more guidance to the retail sector, as they watch the number of cases climb. As of Wednesday evening, coronavirus cases reached 16,560 in Pennsylvania and 47,437 in New Jersey.

On Monday, Pennsylvania began enforcing cleaning requirements for big box stores, specifying all buildings of 50,000 square feet or more must follow guidelines from the Centers for Disease Control for cleaning and social distancing.

New Jersey Governor Phil Murphy issued an executive order codifying some of these more stringent rules on Wednesday, requiring anyone who is shopping to cover their face and forcing stores to limit shoppers. 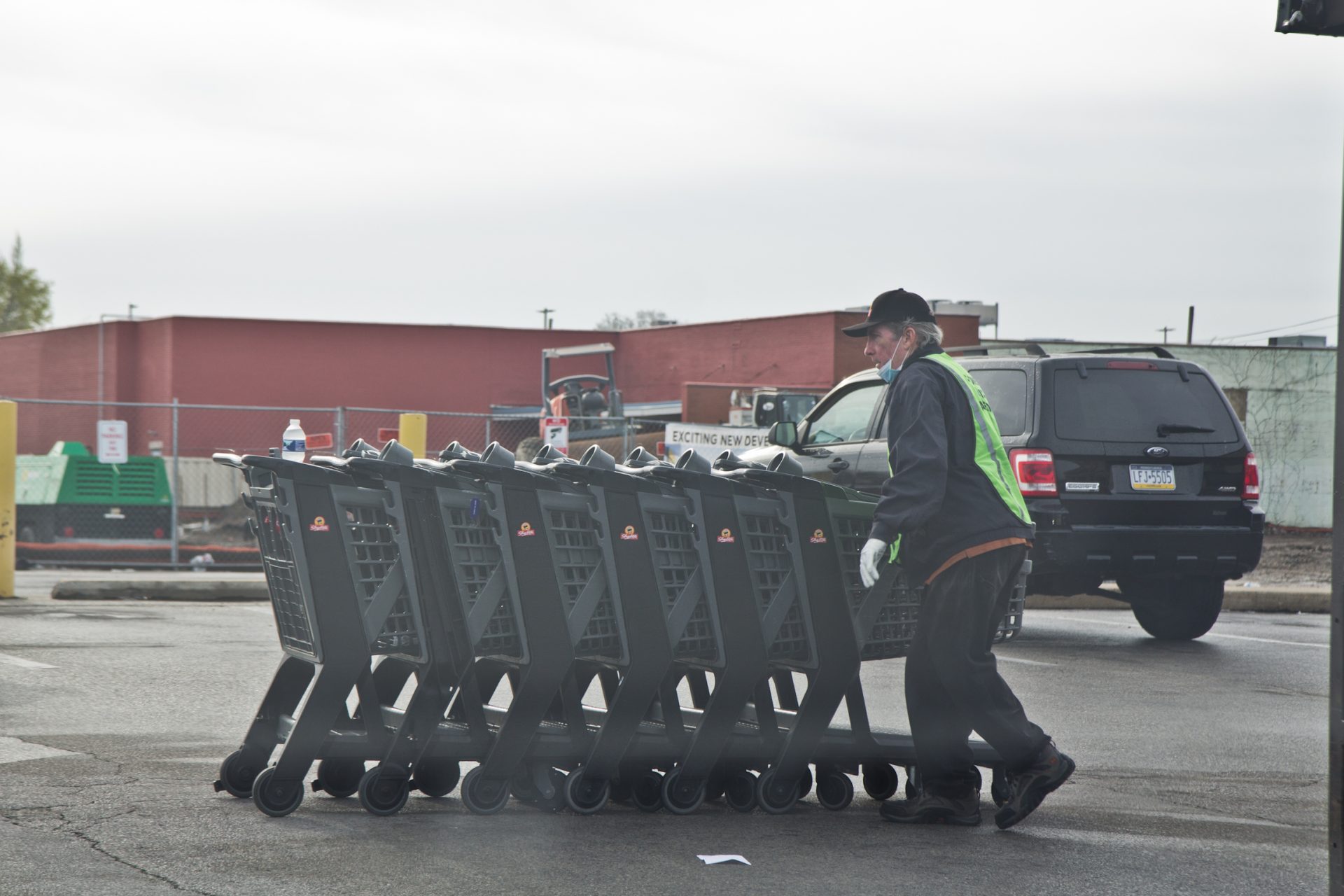 A Shop Rite employee returns carts to a port at the grocery store at 24th and Oregon Wednesday.

These efforts can feel too little, too late for workers who have been competing with hospital staffers for basic protective gear like gloves and masks that have been in short supply.

“As a union, we tried to buy masks… but we wouldn’t have gotten to them until late April, May,” said Wendell Young, president of UFCW 1776, which represents grocery store and food manufacturers in Pennsylvania, including 12,000 in the greater Philadelphia region. Many grocery stores are receiving shipments of masks now, as the CDC changed guidance and called on all the general public to wear them outside the home.

“We had some employers where our members were mixing bleach and water in the back rooms in accordance with CDC guidelines,” he said.

Young said grocery store employees could be in less danger right now if there had been a faster, more coordinated effort to contain the virus. He blamed the patchwork nature of company policies  implemented with varying levels of success, as well as the lack of strict federal or state guidance for grocery stores. Young said access to testing remains an issue, although people are now getting results faster than a few weeks ago.

The union has teamed up with grocery corporations like Albertsons to lobby the federal government to designate grocery store workers as “first responders,” so they could be given higher priority for testing.

Lillian Marcoccia, 18, has been taking unpaid leave from her job at MOM’s Organic Market in Bryn Mawr for more than two weeks, because she has multiple autoimmune illnesses and fears contracting the virus would land her in the hospital.

“It was so crowded, like people were packed up next to each other,” said Marcoccia. She described her employer as generally “excellent in caring for their employees,” but disappointing in its response to the coronavirus pandemic. Several other employees at the location spoke on the conditions at the store as anxiety inducing, echoing concerns also raised by employees in the company’s Center City location.

Working gave them panic attacks, and the lack of social distancing in store made them feel unsafe.

“People are under such high stress that they’re unaware [that] retail workers are people who have families, who are putting themselves in danger,” she said.