FILE PHOTO: In this April 2, 2006, photo, a traditional Passover seder plate is seen at Congregation Beth El in Tyler, Texas, on the first night of Passover. For some Jews this year, Passover Seder will connect the exodus story with today's global refugee crisis through special recitations and rituals _ and refugee guests from around the world. The foods on the plate are symbols, and help tell the story of the exodus of the Jewish people from Egypt as told in the old Testament of the Bible.

This year is not like other years: Philly families learn new rules for Passover

April 8, 2020 | 9:20 AM
With our coronavirus coverage, our goal is to equip you with the information you need. Rather than chase every update, we’ll try to keep things in context and focus on helping you make decisions. See all of our stories here.

The first night of Passover is usually a ceremonious family meal – the Seder – following rituals laid out in the traditional text found in the Haggadah, with the youngest at the table asking four questions about why those rituals exist.

Although governed by tradition, the Seder often takes place at home, so every family does it a little differently.

“We do a lot of songs, and songs with re-written words,” said David Leopold, a writer and curator living in Bucks County. “The Four Questions are done as a Dr. Seuss story.”

In the family of Zack Feinberg, of Kensington, whenever a number is mentioned in the Haggadah — and there are a lot of numbers — his family repeats it in unison.

“We have a lot of inside jokes related to the Haggadah, just to keep everyone engaged,” he said.

With the COVID-19 pandemic forcing many to shelter at home to avoid contracting or spreading the virus, many Jewish families cannot gather around a table for the Seder, as they have done for generations, putting their own personal style on it.

Feinberg said his family never considered cancelling their Seder this year. Instead they are gathering electronically, through the Zoom video-conferencing platform.

“I have an aunt who won’t be participating via Zoom because you’re not supposed to use electronics if you follow a more strict, orthodox interpretation of Jewish law,” he said. “But for us, it’s about being with family and telling the story of Passover. That’s what we prioritize. This is still going to be a meaningful celebratory event for us.”

The celebration marks the Jewish people’s escape from slavery in Egypt. To paraphrase one of the four questions of the Seder, this year is not like other years. During a crisis, you count your blessings. Using Zoom allows far-flung family members to join together when they would not otherwise be able because of the pandemic.

Feinberg’s 94-year old grandfather, now living in Florida, has not been able to be at the Seder for a few years because it is difficult for him to travel. This year, he can be there virtually, along with everybody else.

Feinberg is also grateful that his father will be leading the meal from his home in North Jersey.

Two weeks ago, he came down with a mild case of COVID-19. He did not need to be hospitalized, but spent about 12 days with a fever and fatigue.

“He’s getting better. Still not fully recovered, but feels fit enough to host Seder,” he said, “which I don’t think would have been the case a week ago.” 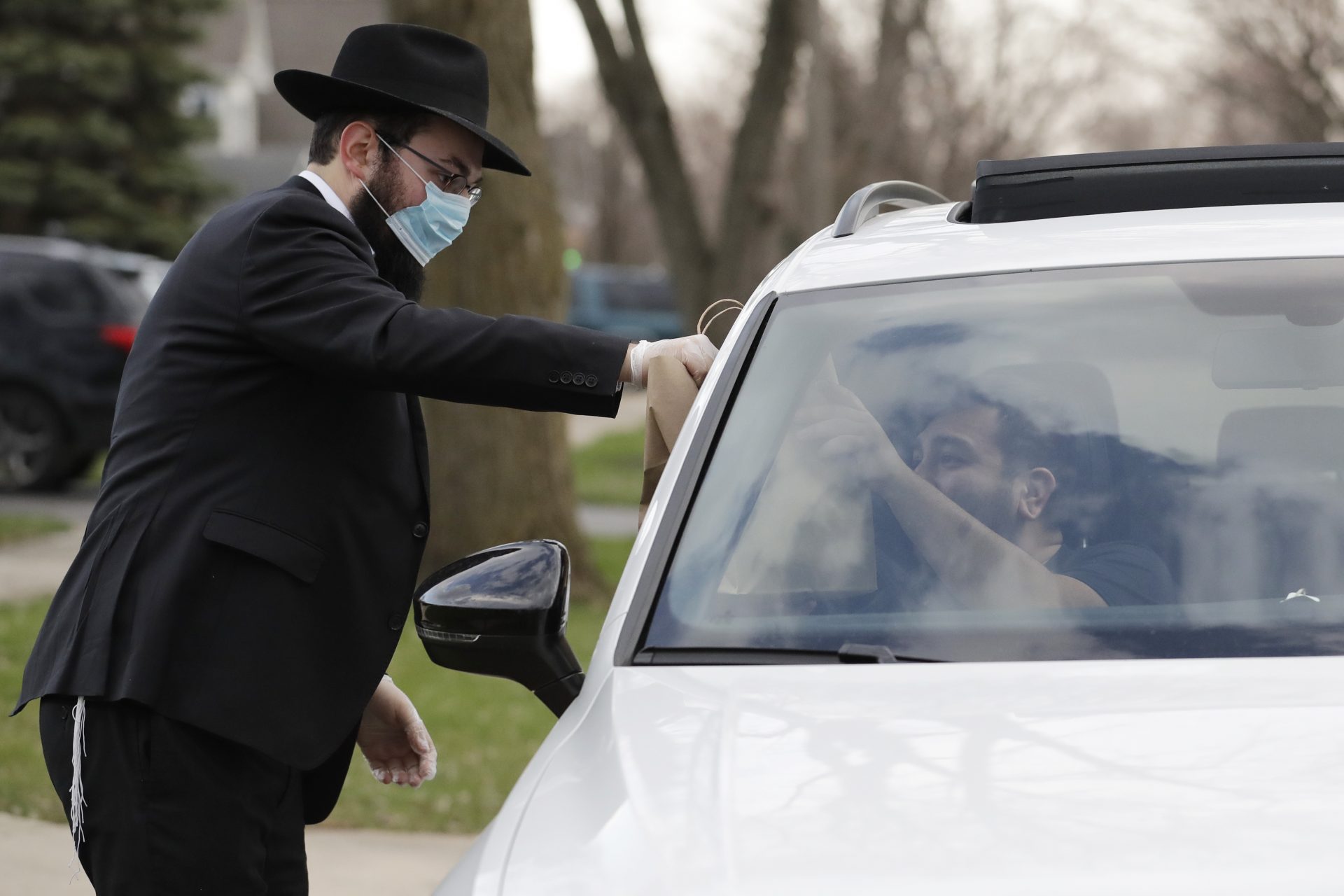 Religious services are taking on new formats because of the coronavirus pandemic. Here, a man receives a “Seder to go kit” from Rabbi Yaakov Kotlarsky at Chabad Jewish Center in Arlington Heights, Ill., Tuesday, April 7, 2020. The Jewish holiday of Passover begins Wednesday, April 8.

Like many synagogues, the Kol Ami congregation in Elkins Park will host a second night Seder on Thursday as it does every year. In a congregation of about 160 families, the communal Seder usually attracts about 50.

This year, Rabbi Leah Berkowitz will host it via Zoom, and has to get everyone up to speed, technologically, to be able to participate.

People have to know both how to use conference calling software and its social protocols.

Meaning: You can’t talk over each other or the call turns into a mess.

“There’s a thing called the Four Children,” said Berkowitz, referring to a stage in the middle of the meal when children are usually asked to read certain passages. “A lot of families have this joke: Who gets to read the wise child, who reads the wicked child, the simple child, and the child who doesn’t know how to ask? Trying to figure out how to get that interplay while also managing chaos. Chaos is fine, but it needs to be managed chaos.”

Berkowitz is encouraging participants to use the mute function of Zoom, to cut off their microphones and instead use the chat function, typing in their responses to sections of the Seder.

She is also making a customized digital Haggadah using PowerPoint and Google Slides, so that individual pages can be posted directly into Zoom. That way, the participants will not need to toggle between computer programs to follow both the book and the meal.

If all goes well, these digital platforms could serve the synagogue in the long run, after the pandemic lifts.

“We’re a small congregation. Live-streaming and video production are not feasible for us on a professional level,” said Berkowitz. “Now that everybody is online, in some ways that lowers the bar. Now that we know how to use this, how can we use it going forward?”

For David Leopold, keeping a sense of history is part of the Seder.

“We remember Jews in the ghettos of World War II, and what they did to celebrate Passover, and remember people in history who had difficulty to celebrate,” he said. “This year it’s us. We’re not going to let something like a pandemic stop one of the big family moments in our year.”

For the first time in 25 years, Leopold’s twin brother, a county commissioner in Santa Cruz, California, will be able to join the family Seder, having not been able to before because of travel. Not only will the virtual meal happen, but Leopold says it will be done with the eccentric, off-book antics the family expects.