President Donald Trump turns from the podium to depart as Vice President Mike Pence steps up to speak about the coronavirus in the James Brady Press Briefing Room of the White House, Monday, April 6, 2020, in Washington.

On coronavirus, President Trump walks a tightrope between grim warnings and offering hope

Trump has become increasingly defensive when questioned about shortages of personal protective equipment and COVID-19 tests. 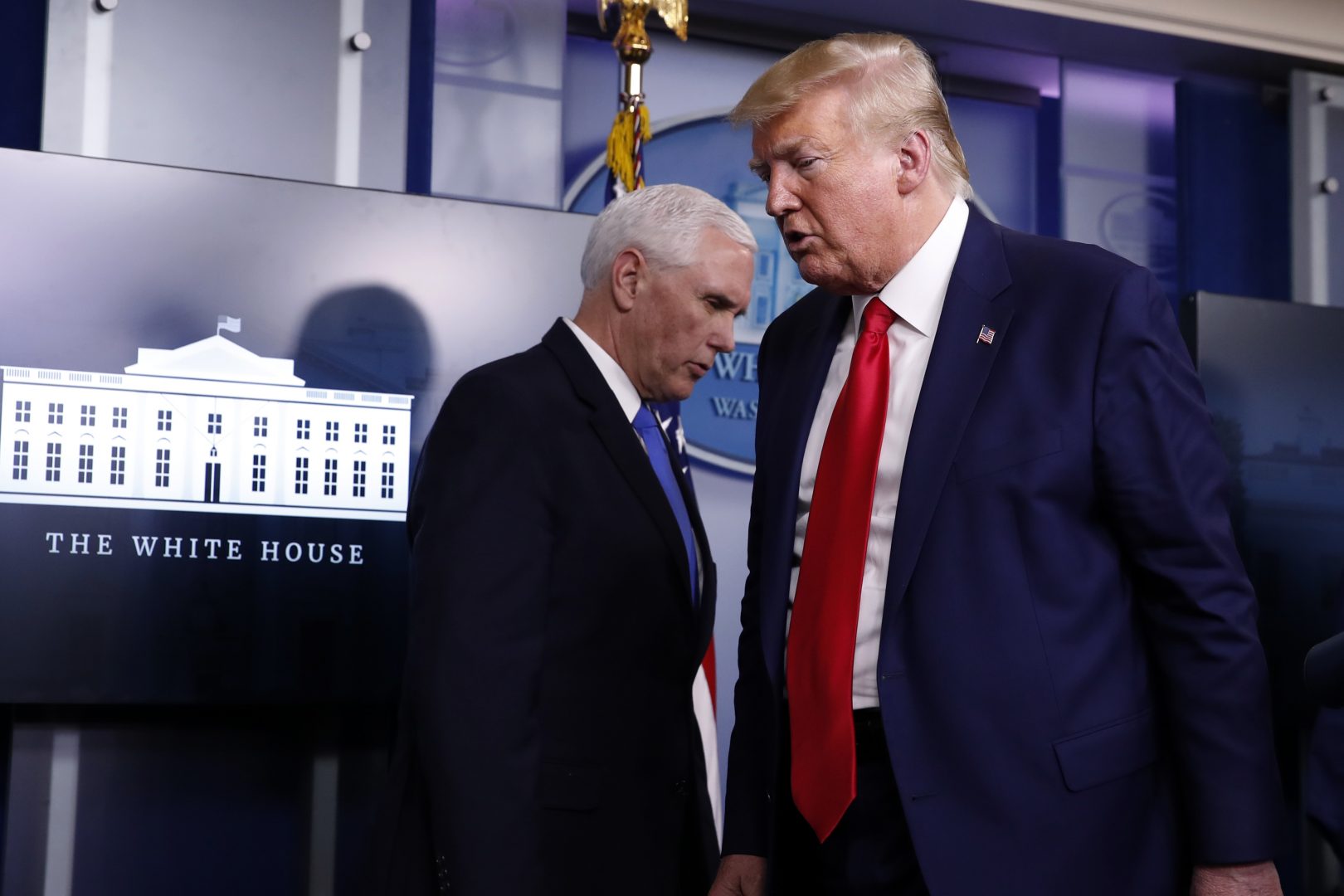 President Donald Trump turns from the podium to depart as Vice President Mike Pence steps up to speak about the coronavirus in the James Brady Press Briefing Room of the White House, Monday, April 6, 2020, in Washington.

(Washington) — President Trump said “we certainly want to try” to lift restrictions on life in the U.S. by April 30 but he made no definitive commitment at a news conference on Monday at the White House.

Trump sought to walk a tightrope between grim warnings about a new spike in fatalities forecast for the coming weeks and upbeat exuberance about how well he said the response is going.

“Tremendous progress has been made in a very short period,” Trump said.

He read off another list of statistics about medical equipment and supplies and said the materiel was being marshaled in the places it’s needed ahead of more growth in cases.

With over 347,000 confirmed cases of the coronavirus in the United States and more than 10,000 deaths, the Trump administration has tried to brace the public for a dire ordeal.

U.S. Surgeon General Jerome Adams said on Fox News Sunday that the week will be “the hardest and the saddest week of most Americans’ lives.” 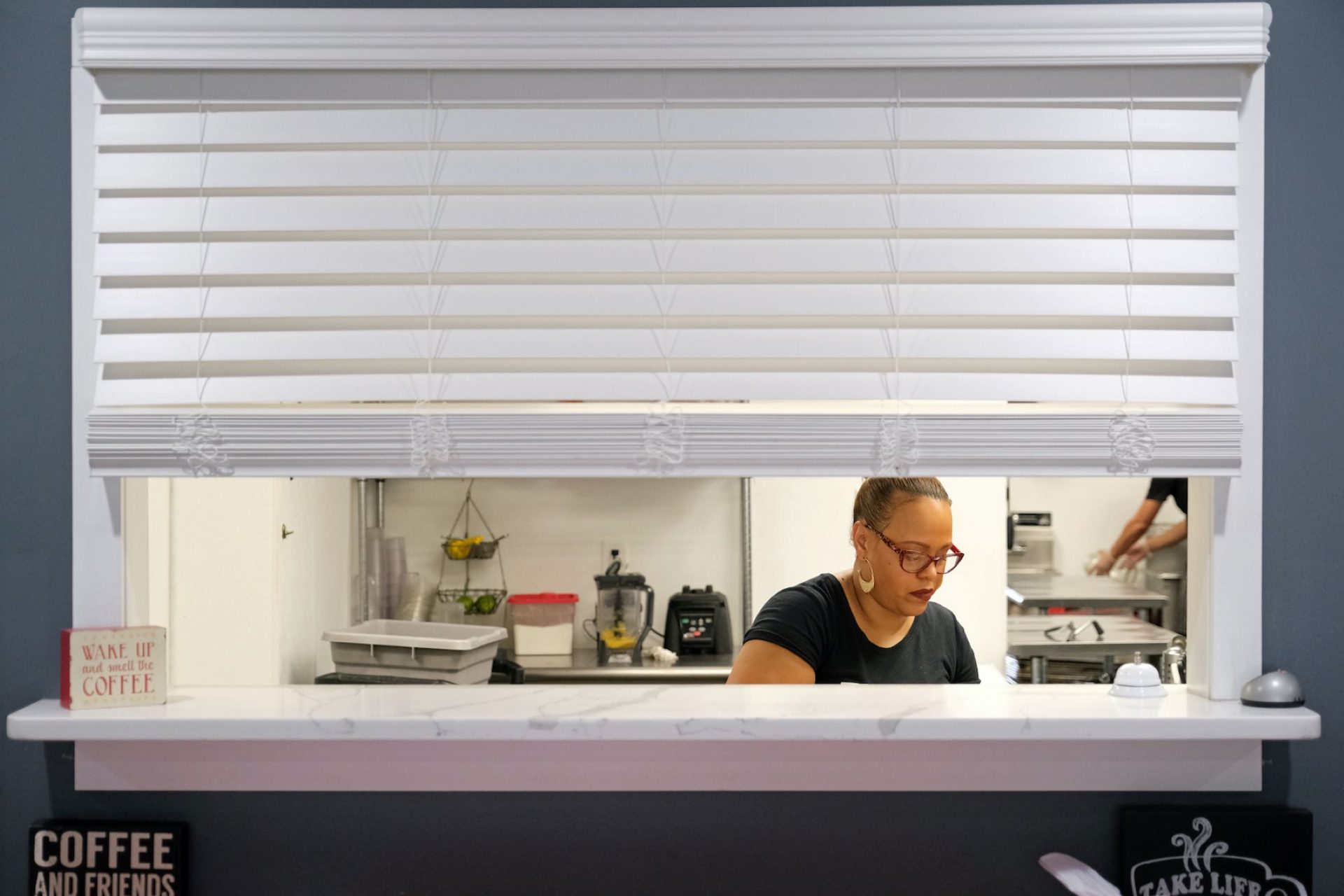 Johanny Cepeda-Freytiz works in the kitchen on April 3, 2020, at Mi Casa Su Casa cafe in Reading.

The White House convened a briefing for 5 p.m. ET Monday to provide an update on its response. Watch the briefing live.

The president rejected reports on Monday that shortages persist of personal protective equipment and COVID-19 tests.

He responded to a report by the inspector general of the Department of Health and Human Services by suggesting that it was politically motivated, demanding to know when principal deputy IG Christi Grimm was appointed. She assumed her post in January after a career with the agency.

The president also complained when he was asked about some initial difficulties associated with implementing a small business relief loan program.

“It’s such a positive event and you ask it in such a negative way,” Trump said.

The president insisted that he and his administration get credit for what he called a successful response and he attacked reporters for not being sufficiently complimentary. 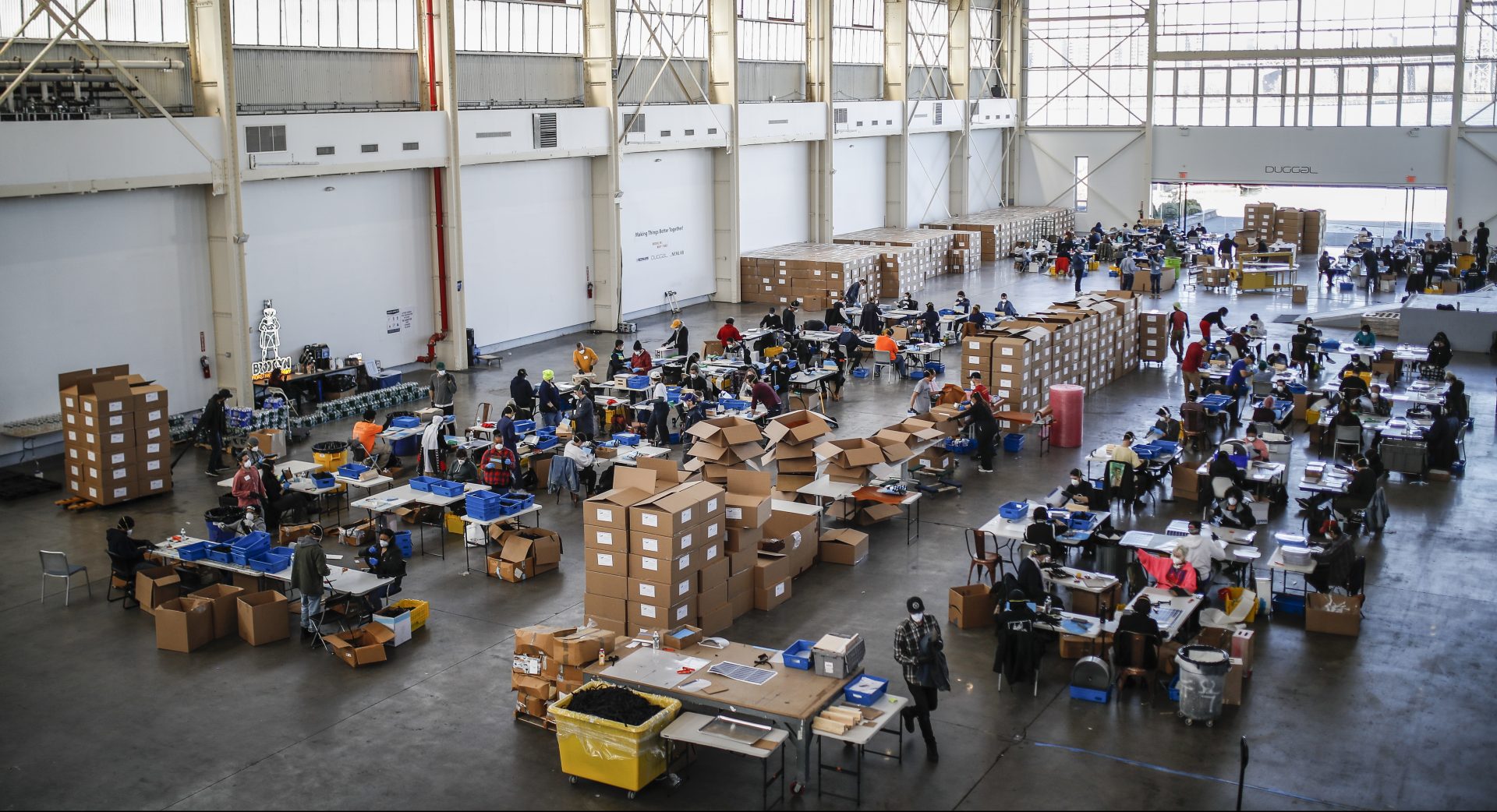 Workers wearing personal protective equipment build splash guards during a mass manufacturing operation to supply New York City government with protection to distribute against COVID-19 transmission, Friday, March 27, 2020, at the Brooklyn Navy Yard in New York. The new coronavirus causes mild or moderate symptoms for most people, but for some, especially older adults and people with existing health problems, it can cause more severe illness or death.

Initially the two vessels, which have about 1,000 beds, were envisioned as surge capacity for non-pandemic cases that could free up space ashore for COVID-19 sufferers.

Demand has reached the point where the ships need to begin taking aboard pandemic cases too.

Trump said he wasn’t sure yet whether he and Congress might need to negotiate a fourth coronavirus relief bill following the earlier passage of the $2 trillion legislation aimed at helping the economy.

The president said he is willing to listen, however, and if more relief is needed he would likely sign on.

And “more money for our citizens,” Trump said, because this has been “trauma.”

The scale of another bill should be “in the vicinity of $2 trillion,” he said.

‘Light at the end of the tunnel’

Dr. Anthony Fauci, a top immunologist and a member of the task force, acknowledged on Sunday that the administration’s messaging may seem contradictory — to both warn Americans about the grim week ahead while also offering optimism — but said it isn’t.

“If we start seeing now a flattening or stabilization of cases, what you’re hearing about potential light at the end of the tunnel doesn’t take away from the fact that tomorrow or the next day is going to look really bad,” Fauci explained. “So we’ve got to make sure we realize we’re always talking about a two-and-a-half-week lag.”

On Monday, Fauci and Dr. Deborah Birx, another top physician helping guide policy at the White House, said they thought it might be possible for Americans to bring about a best case scenario as compared with the earlier projections that suggested the pandemic could cost between 100,000 and 200,000 lives.

“We see potential to go under the numbers projected by the models,” Birx said.

If enough Americans in enough places continue to stay home, avoid large groups, wash their hands and take the other measures urged by public health authorities, the pandemic may prove less lethal than feared, she said.

“Models are good,” he said. “They help us to make projections. But as you get data in, you modify your model … data always trumps models.”

Fauci and Birx said that social modifications on the scale now being practiced in the United States may be without precedent — which is also why they’ve delivered such a forceful blow to the economy and resulted in some 10 million unemployment claims.

But the mitigation measures can flatten the statistical curve of infections and bring about a final death toll smaller than Fauci and Birx earlier warned about, they said.

“I don’t think anyone has ever mitigated the way I’m seeing people mitigate the way they are right now,” Fauci said. “We can make that number go down.”

On coronavirus, President Trump walks a tightrope between grim warnings and offering hope