“I can’t even see the enemy on this one to worry about my people. I worry about it constantly.”

This story was produced as part of a joint effort among Spotlight PA, LNP Media Group, PennLive, PA Post, and WITF to cover how Pennsylvania state government is responding to the coronavirus. Sign up for Spotlight PA’s newsletter.

(Harrisburg) — When an EMT fell ill with the coronavirus in Upper Merion Township, the department saw its ranks suddenly dwindle. In all, 22 emergency personnel, including the fire chief, were quarantined for two weeks.

“It weighs on your mind at night,” said Public Safety Director Thomas Nolan, who doubles as the suburban Philadelphia community’s police chief. “I can’t even see the enemy on this one to worry about my people. I worry about it constantly.”

Health officials in Montgomery County have since eased the rules concerning who must quarantine after interacting with someone who tests positive for the coronavirus — there were simply too many cases for it to be effective — but the experience gave Nolan a troubling glimpse into what the near future may hold for the roughly 1,300 emergency medical services agencies across the state.

Nearly a quarter of Pennsylvania’s EMS agencies shut down between 2012 and 2018 due to budget and staffing shortfalls. Now, the coronavirus represents the ultimate test of a fragile system.

“We are going to see more ambulance companies go out of business,” said Jerry Ozog, a longtime paramedic and executive director of the Pennsylvania Fire and Emergency Services Institute. “[The coronavirus] is going to cause them to go into the red. They’re not going to be able to pay their people or to survive.”

In Pennsylvania, most EMS agencies outside big cities are supported almost entirely via reimbursements from Medicaid, Medicare, and private insurers. The problem, according to EMS officials, is that reimbursements represent a fraction of the actual costs. Insurers, meanwhile, send the checks directly to patients who often fail to pass them along.

“People want a Cadillac ambulance service,” Ozog said, “but they’re not willing to pay for it.”

Compounding the financial strain are long-standing recruitment and retention issues. According to a 2018 legislative study of the issue, the number of emergency medical technicians in Pennsylvania fell by more than 6,000 since 2012 and the number of paramedics decreased by 4,000 over the same period.

That’s due in part to the pay. In Pennsylvania, the average salary for the two professions is $34,310, though federal data lumps them into the same category. EMTs generally make closer to $20,000 per year while paramedics make closer to $40,000. Paramedics are trained in more specialized care than EMTs, allowing them to give drugs and set up IV lines.

“To make a life-sustaining wage in this business, paramedics may work for three different ambulance services,” said Ozog, who also serves as a volunteer firefighter in Hampden Township, Cumberland County. “If somebody gets sick due to the virus, it may put them out of service for a month. And it may put three ambulance services out of commission.”

Heather Sharar, executive director of the Ambulance Association of Pennsylvania, said she expects all of these problems to worsen as the pandemic reaches more vulnerable rural EMS agencies. In March, the trade organization began collecting financial data from its members in an effort to keep track of COVID-19’s economic impact.

For one, she said, a surge in demand for service could upset the delicate balance these companies maintain to stay in the black. On the other side, sick patients who lose their jobs in the ensuing recession may be even less likely to turn over their reimbursement checks.

“If you can’t afford to pay staff and they don’t have anyone to man the ambulance, what are you going to do?” Sharar said.

Rural EMS agencies are already starting to feel the crunch because, in the absence of municipal funding or insurance reimbursements, they rely heavily on fundraisers.

Scott Dolan, chief of the Hiller Volunteer Fire Company in Fayette County, said his organization’s weekly fundraisers have been canceled for the past month. Now, he’s got a freezer full of fish for a fry that won’t happen anytime soon and a reserve fund that could be drained in a matter of months.

“If we don’t have a fundraiser for three months, bills are not going to be paid and we’ll be in a serious financial crisis,” said Dolan, who also serves as a paramedic. Of his company’s 40 volunteer firefighters, half of them are also trained to respond to ambulance calls. 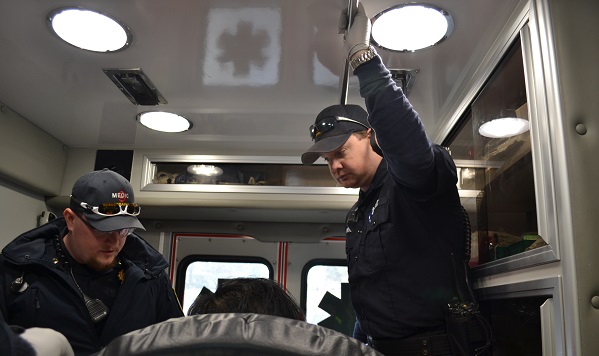 Dolan said his volunteer company has enough personal protective equipment for just 50 patients. He’s working with the county’s emergency management agency to ensure a steady supply of gowns, masks, and other equipment.

Like many EMS leaders, Dolan relies on local dispatchers to screen calls in advance so he can use the equipment he has strategically. If the caller or the patient can’t answer certain questions, they assume it’s a positive case. His medics already reuse their N95 respirators, assuming they haven’t been contaminated, and he’s trying to obtain plastic-coated gowns that could be disinfected and hung out to dry between calls.

The state started with a stockpile of 1 million N95 respirators before the COVID-19 outbreak, Department of Health spokesperson Nate Wardle said. So far, it has been able to distribute 1.3 million with 112,000 coming from the federal stockpile and the rest donated or obtained via state procurement.

Wardle said the state is “anticipating another 121,000” respirators from the federal stockpile, “but do not know when or if they may come.” 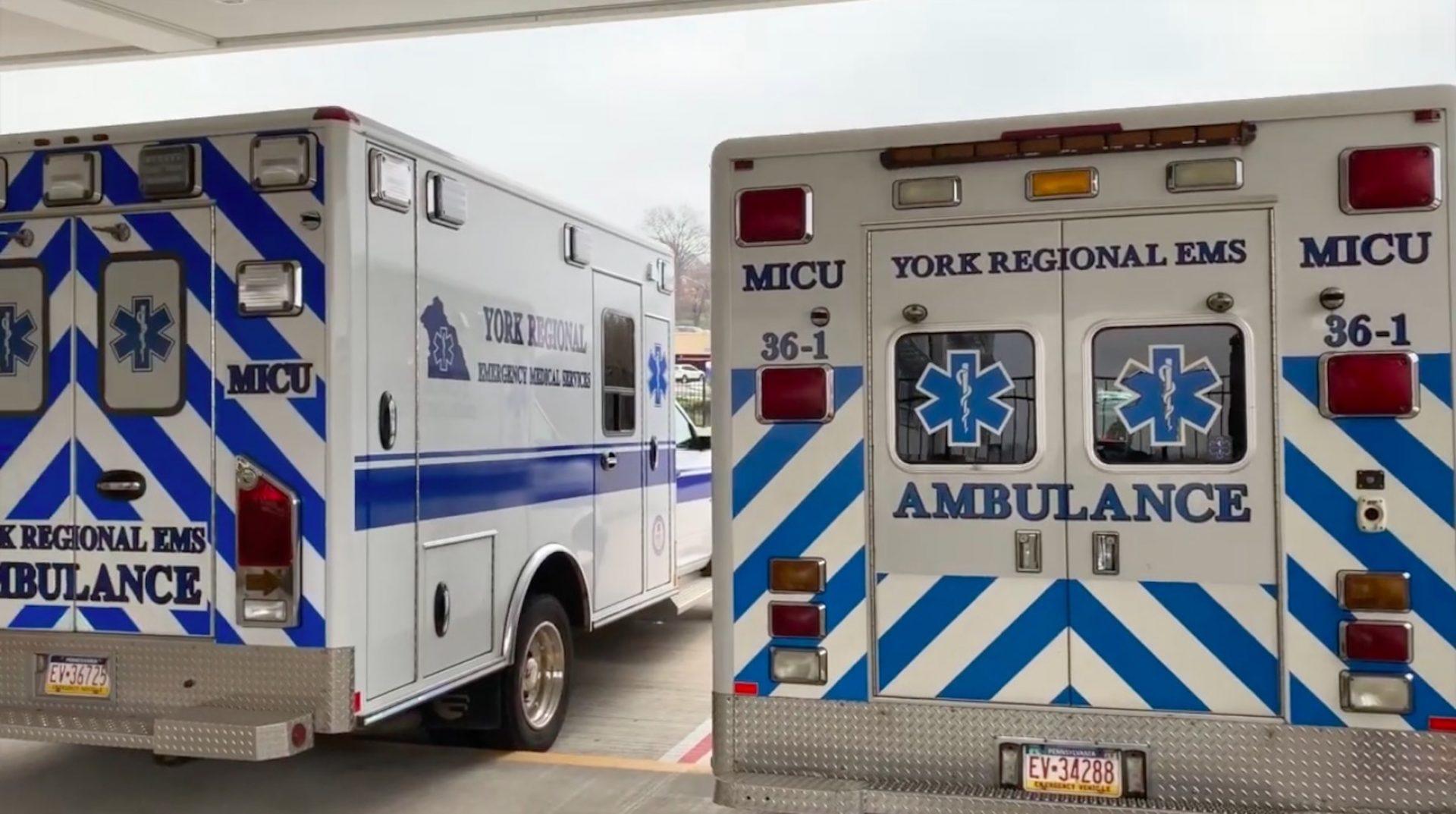 There are several measures being contemplated to help EMS agencies survive the onslaught of COVID-19. For one, they can apply for Small Business Administration loans under the recent federal stimulus. And at least two state House proposals — from Cris Dush (R., Jefferson) and Pam Snyder (D., Greene) — would set aside emergency funding for firefighting and EMS agencies.

But Ozog said there needs to be a long-term solution. That could include requiring insurers to send reimbursements directly to ambulance companies or creating countywide authorities that would use taxpayer money to oversee ambulance services. Both would require legislative action.

“The system will not look the same after this,” Ozog said, “because of the financial fragility of the system we have now.”

Upper Merion Township is in a better position than many other small EMS agencies — it gets support from local taxpayers. That’s a fairly recent development, however. The township’s original community-based ambulance service, similar to Hiller’s in Western Pennsylvania, disbanded two years ago, prompting the municipality to take over.

They’ve also eliminated most in-person meetings, reduced the number of personnel responding to any one call, and separated EMT staff between two locations to avoid a similar situation in which a large number of first responders need to be quarantined at the same time.

But Nolan’s biggest adjustment has been mental.

“After 35 years in law enforcement, it’s one of the hardest things to deal with,” he said. “I’m used to throwing resources, personnel at a problem and fixing it. I’ve had to adjust to the mindset of: You need to keep people away from this.”