Dawn Sites with her family in the woods behind her house. Her son Jaiden wears a blue, red and yellow jacket. (Courtesy of Dawn Sites) 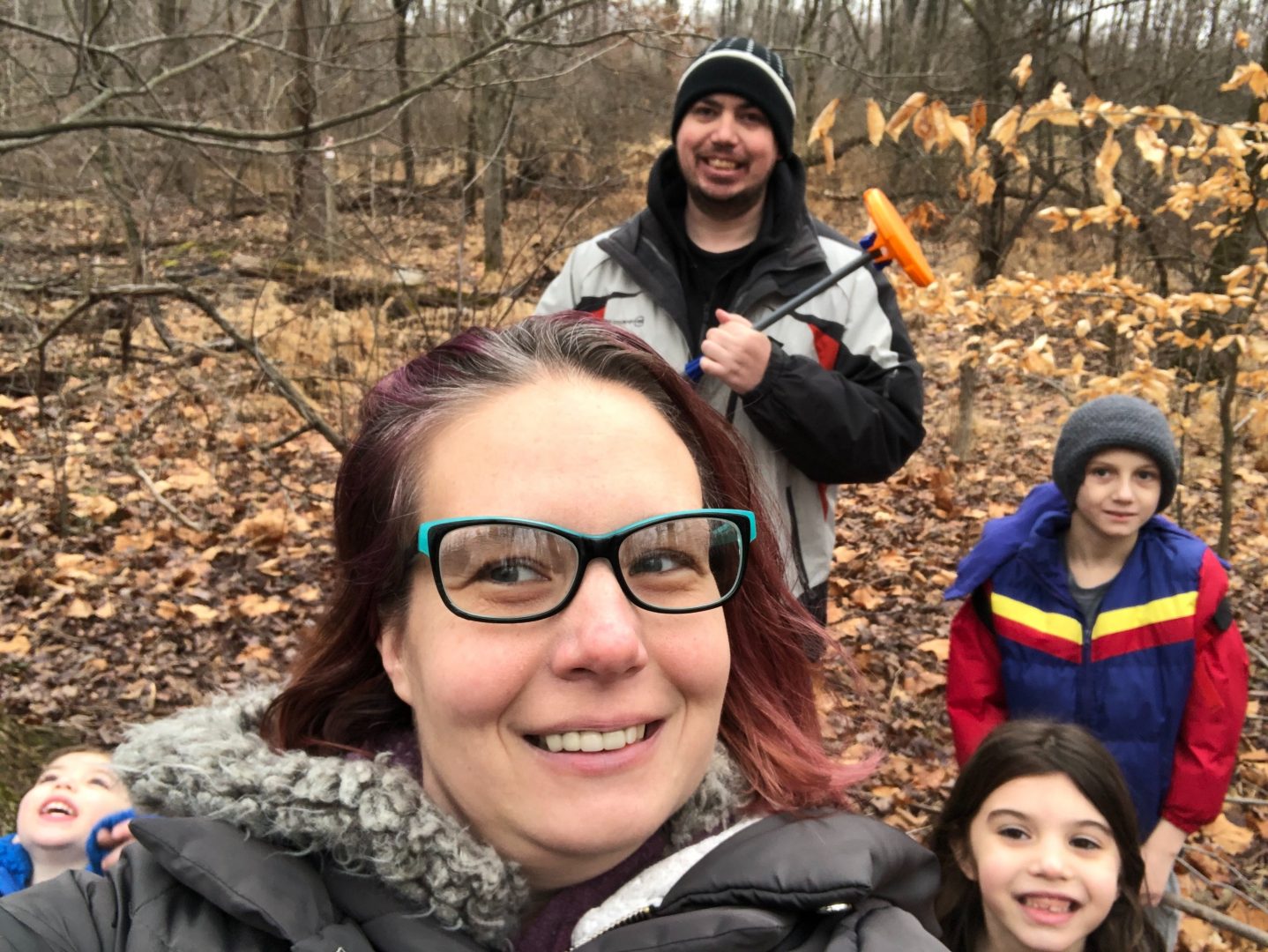 Dawn Sites with her family in the woods behind her house. Her son Jaiden wears a blue, red and yellow jacket. (Courtesy of Dawn Sites)

Jaiden lives in a residential treatment facility in Warminster for children with significant behavioral health needs, and it’s been over two weeks since she last saw him in person. Shortly after that visit, as the threat of COVID-19 rose in the Philadelphia suburbs, the Bucks County facility called to tell Sites it was no longer allowing visitors. That included her.

When they talked on the phone a week later, Jaiden started to have questions.

“He asked when he was coming home, why haven’t we visited, why he hasn’t been going to school,” Sites said. “He was fighting back tears, and then he’s like, ‘I want to come home.’”

Before the coronavirus pandemic radically disrupted routines, Jaiden saw his family a few times a week, and made the hour-long trip home to Pennsburg, in northern Montgomery County, every weekend. But now, he isn’t allowed those weekly trips home either. Sites said she tried to explain that it was to keep him safe.

“He just was not having it, and doesn’t understand what’s going on,” she said.

Jaiden has been living at the residential treatment facility, Warwick House, since September. He previously had two lengthy hospital stays after worsening mood swings led to escalating behavior crises at home, Sites said. Jaiden’s emotional difficulties have gotten “so much better” since he began his stay at Warwick House, she said. He was continuing to improve, and the staff wanted to keep him there a couple more months.

Now that she’s barred from visiting with Jaiden for the indefinite future, Sites said she would discharge him early if she only could.

The need to contain the spread of the virus has created new barriers all across the health care system for relatives visiting loved ones. Elderly nursing home residents have been cut off from adult children. For a short time last week, two New York City hospitals barred parents-to-be from accompanying their spouses during childbirth before the state intervened. And hospitals aren’t allowing even immediate family members to visit patients, except under such extreme circumstances as end-of-life care.

Many hospitals are making exceptions for pediatric patients. But children living in Warwick House and other residential behavioral health facilities find themselves completely separated from their families. In Pennsylvania, facilities adopting these highly restrictive visitor policies are following recommendations from the state to prevent the spread of the coronavirus, said Jim Sharp, the children’s policy director at the Rehabilitation and Community Providers Association, a trade organization that represents more than 350 health and human services providers.

The state’s Office of Children, Youth, and Families sent out guidance last week recommending that “all non-employee visitors be prohibited … unless it is a medical necessity, required by court order, or necessary to ensure completion of duties for child welfare and juvenile probation agencies.” It notes, however, that “exceptions should be provided for immediate family members.”

Sharp said the state’s guidance left it up to each facility to decide whether and when to allow family visitors, and that they had good reasons to exercise extra caution. Behavioral health facilities like Warwick House don’t have the same ability that hospitals have to control an outbreak of contagious disease, he said — and the staff don’t have as much access to personal protective equipment like masks and respirators.

It is especially important for children’s facilities to protect staff during a pandemic because of federal and state laws that require these workers to clear background checks, Sharp said. Those checks require their fingerprints to be taken, and many of the centers that do that have closed.

“So replacing those workers is actually almost impossible to do,” Sharp said.

The National Council for Behavioral Health’s guidance for facilities nationwide says: “Facilities should restrict visitation of all nonresidents (visitors and non-essential health care personnel) unless it is deemed necessary to directly support a resident’s health and wellness or for certain compassionate care situations, such as young children in residential treatment or end-of-life care.”

But policies intended to protect the physical health of patients can exact a toll on their mental health and that of their families. Sites said being separated from her son was making her depressed. It’s also been hard on her 5-year-old daughter, Kari. Sites found a therapist who meets with Kari through Skype to help her cope with her brother’s absence. The two siblings are like “Frick and Frack,” Sites said.

She was also getting calls from Jaiden, telling her he wanted to come home.

“It just sucks as a mom that you feel helpless,” Sites said.

She looked into discharging Jaiden, but said it wasn’t clear when that would be possible. He gets his schooling at Warwick House, and because of his diagnoses of autism and ADHD, she said, discharging him would require meetings with her local school district to ensure they could meet his needs. With schools closed indefinitely due to the coronavirus, Sites said she hadn’t yet gotten a definitive answer.

But she added that Warwick House was a safe place for her son to be during the pandemic, saying that staff were taking the children’s temperatures frequently, and that there were protocols for isolating anyone who gets sick.

“Knowing that he is safe, and they are doing what’s appropriate and what is needed is comforting,” she said.

Michael Silver, a child and adolescent psychiatrist in Media with decades of experience working in inpatient settings, said that being in a residential facility can provoke feelings of anxiety and uncertainty in children that could be made worse by separation from parents or caregivers.

Often, he said, these children are not only suffering from severe behavioral health conditions, “they’re also suffering from disconnections and conflicts and unresolved issues within the family.”

For that reason, family members are important participants in a child’s treatment, Silver said. In a worst-case scenario, he said, the increased anxiety of being apart from a parent could exacerbate symptoms of the child’s condition. That makes it harder for these residential facilities to strike the right balance between protecting people from the virus and providing care to patients than it would be for a hospital treating physical ailments.

As the coronavirus crisis drags on, Silver said, he hopes residential facilities will explore possible ways to safely allow family members to visit, such as having them take tests for the virus to show they’re not a risk. Tests, he acknowledged, have been in short supply, but “are there ways of providing that on a prioritized basis in situations like this?”

Stoll said that Warwick House uses a “heavy-duty family-focused” approach, and that keeping parents away “kind of goes against the nature of the program.”

But children are still speaking frequently with their parents over the telephone, Stoll said.

Staff also are using video-calling apps to give them some face time together during regular meetings and therapy sessions that would typically take place on campus, Sites said. She had her first video call with Jaiden last week.

“He just took the computer and gave it a hug, to give me a hug. And then he told me to now hug my phone.”

Jaiden seemed to be doing better, Sites said, and she felt better after seeing him, too. But she hasn’t gotten any closer to figuring out when she might be able to bring him home.

“At least I was able to see him, and he looks good, and he sounds good,” Sites said. “Now we’re just, I guess, hoping for the best.”

‘A virus of hate:’ Pennsylvanians of Asian descent urged to report if they are targets of hate over COVID-19