The State College borough hung banners about the census before Penn State switched to remote learning for the rest of the spring semester.

It’s Census Day. Even if they’re elsewhere, Penn State students should be counted at school address

April 1 is Census Day. That means it’s usually where you live on April 1 that you give as your address when you fill out the census.

But the coronavirus means Penn State students who would usually be in State College are spread far and wide. Penn State and the U.S. Census are trying to get word out that students should still be counted at their school address.

“They utilize the services that we have here: our hospitals, our roads, our public transportation,” said Charima Young, director of local government and community relations for Penn State. “And so we need them to be counted here.”

Penn State considers the census very important. That’s because communities get about $2,000 per year worth of federal funds for each person who does the census.

The count is also used to decide Congressional representation.

Since the census only happens once a decade, students counted now represent those using services in State College for years to come.

“If they’re graduating this year, they’re basically making sure that there will be public services and utilities available to the students that come after them,” said Mike Stefan, the director of state relations for Penn State.

A video on the census website backs up what Penn State officials are saying. It makes it clear students who are home because of coronavirus – even those seniors who might never return to State College – should still submit using their school address.

“Here’s the official guidance: Students that normally live at school should be counted at school, even if you are temporarily living somewhere else due to the COVID-19 pandemic,” said Virginia Hyer with the U.S. Census Bureau’s Public Information Office in the video.

To reach students who are now home, the university has been sending out emails to students and parents. And they’re placing targeted ads on social media.

Stefan says outreach efforts are important because students are always a “hard to count” population.

“Primarily because they may not understand the importance of it. They may think their parents are doing it,” Stefan said. “And then there are situations where you have a lot of students living at one address, right. So when the census is being completed, if just one person fills out the census for an address, even though 50, 60 people could live there, that will show up on the census as an address that’s completed the census. So it’s not really a true count then.”

Penn State has done trainings with fraternity leaders on how to fill out the census for everyone in the house.

Young says they’re also targeting international students who might not think they should do the census.

“So even though you may not be a citizen of the United States, you still should be counted in census,” Young said. “Once again, they still utilize the services that we have here in Centre County.”

And Stefan wants students to know that for the first time they don’t need the physical mailings to complete the census.

“So this is new, this census, that you can fill out the census online,” Stefan said. “So that actually, during the time that we’re going through right now with coronavirus, is actually really helpful, right? I mean, because otherwise, there could be postcards just sitting at an empty apartment here in State College.”

Young says the Department of Education makes it a little easier to count students. They let Penn State submit the census data for those who live in dorms. That includes 14,000 students on the University Park campus.

“So our focus will really be the students that live off campus,” Young said.

Stefan and Young aren’t the only ones working to get students counted. They’re part of the Centre County Complete Count Committee, which also includes nearby municipalities. 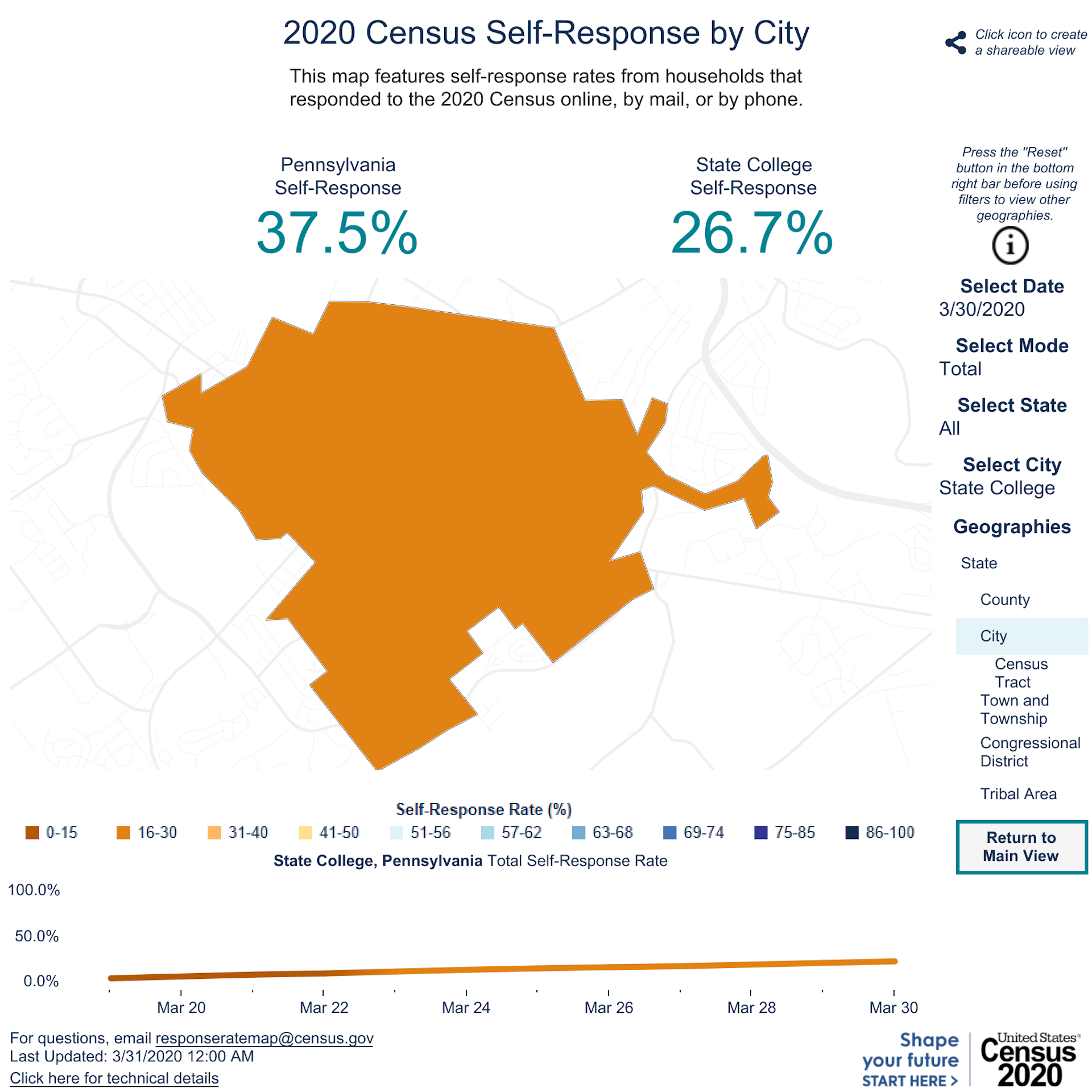 According to U.S. Census statistics, response rates in the State College borough are well below those at the state and national levels.

Douglas Shontz with the State College Borough says they had planned to have information booths with iPads so students could fill out the census then and there. Now he’s worried about all the federal funds the borough will lose out on for each person missed.

“A couple thousand dollars can help a lot with affordable housing, help with transportation and infrastructure improvements, streetlights, which are a safety concern,” Shontz said. “And so, you know, if we miss a couple hundred people or a couple thousand people or even tens of thousands of people, that has a huge, huge, huge impact on us to be able to deliver the services that we usually deliver.”

Shontz said students are always undercounted, and he thinks with students being gone the census count will be down from the one ten years ago.

“It’d be my prediction that we’re going to see a significant drop off in count this year,” Shontz said, “but I guess time will tell.”

The census would normally be sending workers to the doors of those who haven’t filled it out by now. But field operations are currently suspended until April 15 because of the coronavirus. Whether or not you’re a student, you can do your part – and make sure no one comes to your door – by filling out the census now at 2020census.gov.

Click here for an interactive map of census submission rates.