“As we called vendors to purchase hotspots, if we even blinked and a couple of minutes went by, those hotspots were sold and gone.”

As superintendent of the Milton Area School District in central Pennsylvania, she’d already bought enough laptops and tablets so that each of her roughly 2,000 students had a personal device.

They seemed well positioned for the statewide pivot to virtual learning.

“We thought, ‘Wow, this is great. We at least are ready with devices and a hybrid learning model and students being familiar with online learning tools,’” said Keegan.

Then her district hit the internet-access wall.

Milton realized that a combined 240 students and teachers had no internet connections at home. Officials decided to buy hotspot devices for each of those households, but that plan presented its own problems.

Wireless providers used to offer hotspot hardware for free, Keegan said — as long as the district committed to a year of internet service for each new device. But with the coronavirus outbreak fueling demand for at-home internet access, prices skyrocketed and supply evaporated.

“As we called vendors to purchase hotspots, if we even blinked and a couple of minutes went by, those hotspots were sold and gone,” Keegan said.

Wireless hotspots, it turns out, have quickly become the hand sanitizer of the technological world. Congressional Democrats sought government aid for school districts purchasing the devices, but the final relief bill out of D.C. didn’t include a subsidy for hotspots.

The Milton Area School District ended up buying 140 devices from a pair of companies that connect consumers with used hotspot dealers — spending as much as $200 a device. The district also invested $4,650 to recognifigure Wi-FI access points so that families could drive into a school parking lot, if needed, and download assignments.

All told, the district estimates it’s already spent about $20,000 on technology upgrades designed to ensure that every family can get online — with more bills to come as usage increases.

“We’re doing our very best to be present for our students and to follow a directive to continue education,” Keegan said. “We think it’s important.” 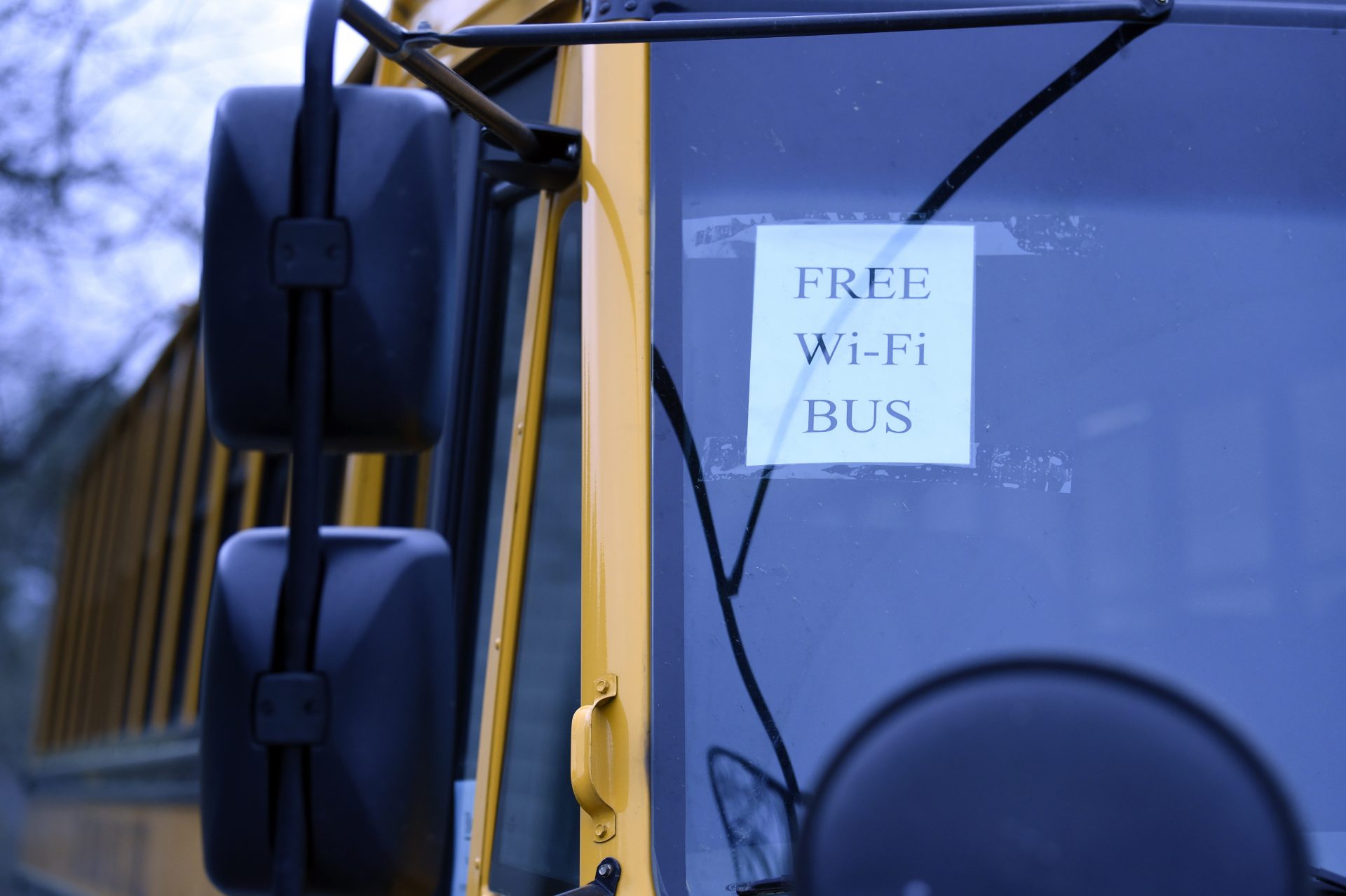 In this Thursday, March 26, 2020, photo, this wi-fi-enabled school bus, seen at an apartment complex in Winnsboro, S.C., is one of many being sent to rural and lower-income areas around South Carolina to help students with distance learning during the new coronavirus outbreak. With routers mounted inside, the buses broadcast enough bandwidth in an area the size of a small parking for parents to drive up and children to access the internet from inside their cars.

No stoplights, no internet

Pennsylvania’s quick pivot to online education has exposed significant technological gaps among the state’s 500 school districts. In rural areas, internet access has emerged as one of the most vexing issues.

It is a twofold dilemma. Many districts serve a high percentage of low-income families that can’t afford internet service. But even among those families that could afford Wi-Fi connections, there are wide swaths of the state where service is painfully slow or nonexistent.

The FCC estimates that around 600,000 Pennsylvanians don’t have broadband internet access. A recent study, led by a Penn State professor, estimated that the true number is far higher when you account for households where the average download speed falls below what the federal government considers broadband quality.

As Pennsylvania embarks on an indefinite school closure — and with the state telling districts to provide as much education as possible during the break — local administrators are furiously trying to gauge home internet access in their districts. Some rural administrators have found that as many as 50% of their students can’t connect in the home, according to the Pennsylvania Association of Rural and Small Schools. And the issues associated with slow download speeds have started to multiply in families where children and parents working from home are suddenly sharing the same connection all day long.

As has been the case elsewhere in society, the coronavirus pandemic has revealed deep inequities of opportunity in the U.S. education system. While many well-resourced suburban districts in Pennsylvania have been able to jump-start virtual instruction relatively quickly, many others have faltered. In Philadelphia, the district is scrambling to distribute as many as 50,000 laptops to students without computers at home. New York City reportedly loaned out 300,000 electronic devices to students. In rural Pennsylvania, internet connectivity — access to the world’s information in an instant — has been a defining deficit.

In rural McKean County, researchers estimate that the average download speed is 8.21 Mbps — nowhere near the 25 Mbps standard for broadband quality. The Otto-Eldred School District occupies about 86 square miles on the county’s northern fringe, right along central Pennsylvania’s border with New York state.

“We don’t have a stoplight — so that gives you an idea of how small and rural we are,” Superintendent Matthew Splain said.

The hilly terrain, he added, creates massive disparities in internet service, ranging “from high-speed cable internet with 100 megabytes of services, down to zilch.”

The district believes that about 10% of its students have no internet access at all — and another 10% have such slow service it would be difficult for them to participate in any form of online learning.

So the district plans to make every assignment available in paper form for those students who need it — using meal sites and possibly mail service to get hard copies to families. The district may also create Wi-Fi hot zones in parking lots, a common tactic among rural districts.

As of now, the plan is to get this hybrid model running by Thursday.

“We’ve probably changed our direction on things three times since the first announcement that schools are closing,” Splain said. “We’re just maintaining flexibility as best we can.” 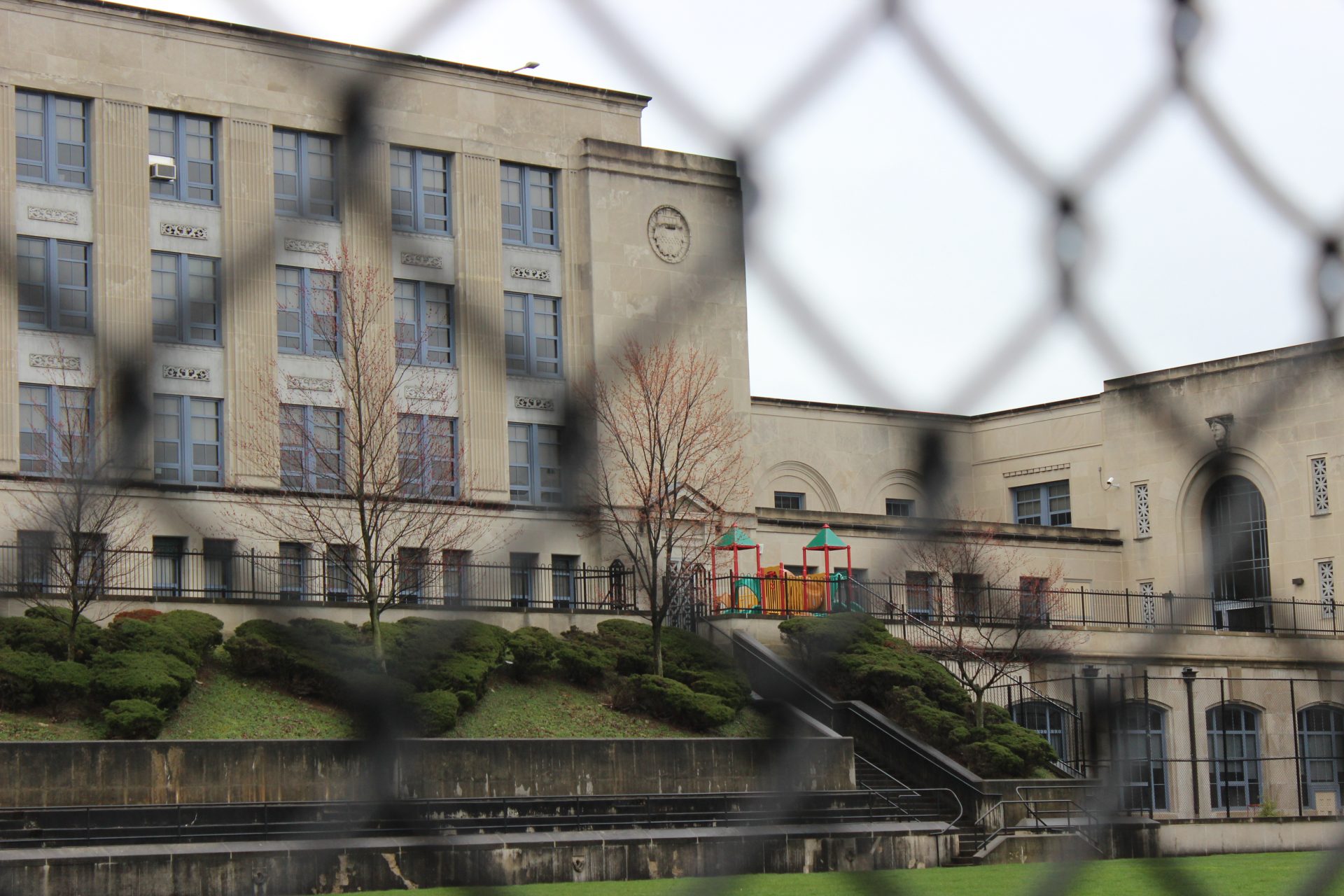 In the Montoursville Area School District — east of Williamsport — internet service gets spotty once you move about seven miles out of the main town, said Superintendent Christina Bason.

The district has mulled several stopgap measures, including using buses as mobile Wi-Fi hotspots that would pull up to students’ houses and allow them to download their work.

The Connellsville Area School District southeast of Pittsburgh asked local businesses to host free Wi-Fi hotspots for this purpose. District residents can now drive up to Indian Creek Baptist Church, Mountain Pines Campground, or even Lynn’s Dairy Queen, where students can download assignments and dig into a Blizzard while riding out the coronavirus storm.

“They’re truly doing it for students,” said Superintendent Joseph Bradley. “I don’t think there’s anything in it for them.”

Superintendent Christopher Pegg of the nearby Albert Gallatin School District has converted his eight school parking lots into Wi-Fi zones. He’s hoping that provides enough coverage in his 144-square-mile district, but the district may fall back on paper packets if problems arise.

“The magnitude of this is not something that we’re used to, and it’s gonna be a learning curve for everybody,” Pegg said.

Cathy Keegan, of the Milton Area School District, said it’s been a time of experimentation and rapid problem-solving.

On Monday, the district started its online education program, which includes daily check-ins via video chat. One teacher recorded herself doing a virtual Pledge of Allegiance with a classroom of kindergartners.

“Is it perfect? No,” said Keegan. “Because of our connectivity issues, we still have kids that are struggling to get on.”

Keegan said her staff is working to close the gaps that remain. She wants her students to see that teachers are there for them — however long this shutdown lasts.

“The most surprising to me is how people have come together,” Keegan said. “Empathy and caring has risen to the top again.”

Pa. extends expiration dates for some firearms permits because of the coronavirus pandemic