On March 25, signs at a distribution center for Wolf Home Products in York County described it as an "Essential Business" and listed social distancing steps.

The question of which businesses must close and which can stay open during the statewide coronavirus shutdown has been an ongoing point of confusion and anger. 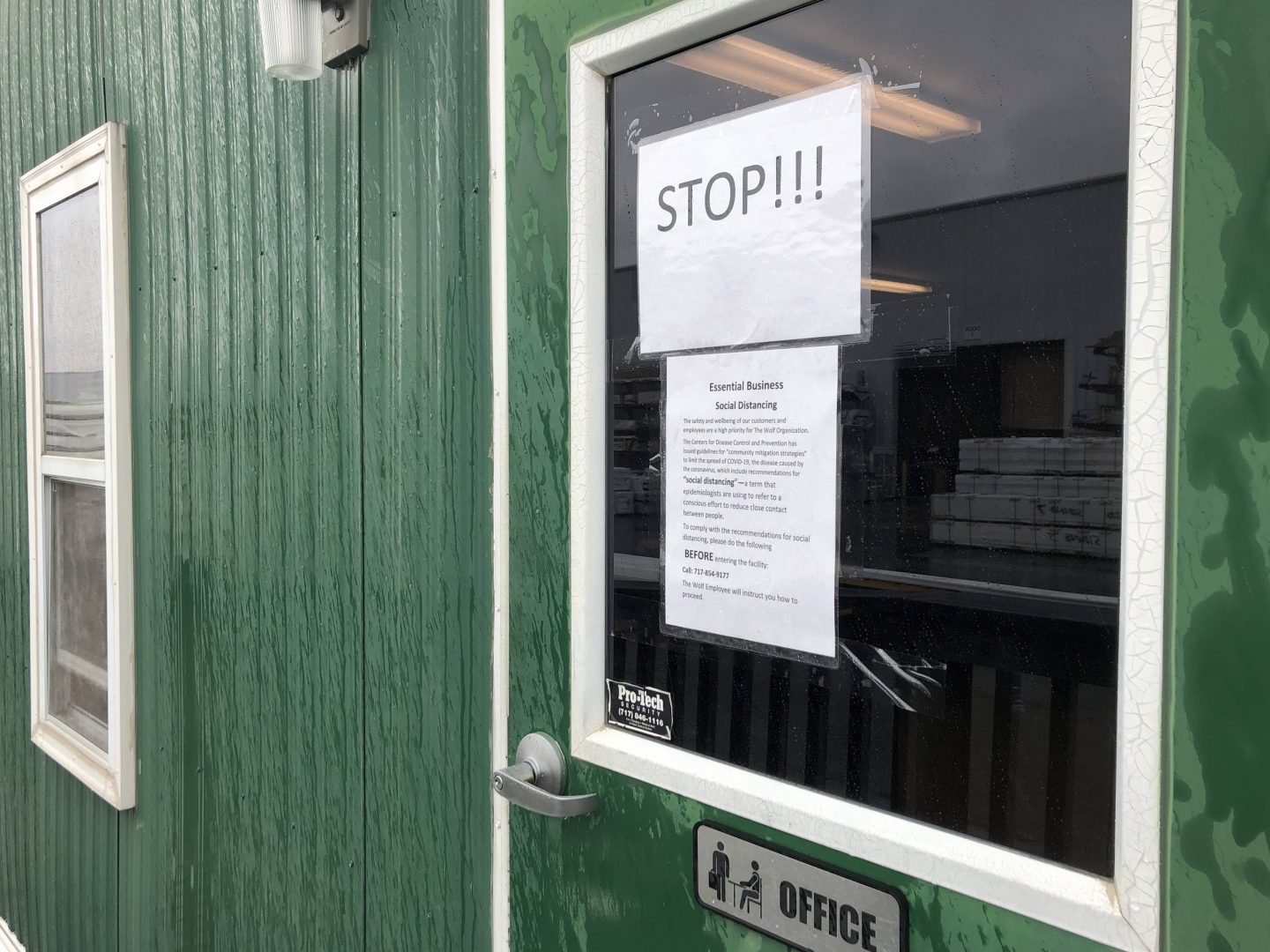 On March 25, signs at a distribution center for Wolf Home Products in York County described it as an "Essential Business" and listed social distancing steps.

HARRISBURG — Gov. Tom Wolf’s former business, a cabinet supply company in Central Pennsylvania, has continued operating during the coronavirus shutdown despite having its waiver rescinded by state officials, PA Post and Spotlight PA have learned.

Last week, in response to questions from the news organizations about how the company qualified as “life-sustaining,” the governor’s office said in a statement that a waiver that had been issued to Wolf Home Products allowing it to stay open would be revoked, forcing it to close.

The statement said Wolf Home Products “was originally approved as supporting infrastructure,” but “upon further review, [the Department of Community and Economic Development] determined that the lines of business Wolf is engaging in do not meet the criteria.”

But in an interview Sunday, the company’s CEO, Craig Danielson, said seeking the waiver was merely a precaution amid uncertainty surrounding the shutdown order. He said he closed the corporate office in York, but that the company’s warehouse operations remained open.

“The waiver doesn’t mean anything,” Danielson said. “We didn’t need a waiver.”

He said the company — which supplies kitchen and bath cabinets, among other products — qualifies as “life-sustaining” under the governor’s order as a provider of building materials, because it warehouses goods for other stores, and because of its trucking operations.

Asked about the continuing operations, Casey Smith, a spokesperson for the Department of Community and Economic Development, said, “Wolf Org/Wolf Home Products was notified via phone on Thursday that all physical location work must stop.”

“All non-life-sustaining businesses in Pennsylvania should be closed if they do not have an exemption from the commonwealth,” Smith said.

But Danielson disagreed, saying, “there’s evidently confusion” and later attributing it to a “clerical, administrative error.”

The question of which businesses must close and which can stay open during the statewide coronavirus shutdown has been an ongoing point of confusion and anger since March 16, when the governor first began asking “non-essential” companies to curtail operations.

Then, on March 19, Wolf expanded the order to require all companies but those deemed “life-sustaining” to close their physical operations. His administration released a list of industries labeled as to whether or not they could remain open, and since then, officials have twice revised that list.

The governor also created a waiver process that allows any business to apply and make an argument about why they are “life-sustaining.” The state had received more than 24,000 waiver requests as of Wednesday. Of those, 4,003 had been approved and 4,439 had been denied.

But many in the business community have complained that the waivers are being applied inconsistently and decided in secret. State officials have repeatedly declined Spotlight PA’s requests to release the full list of waiver requests, including those granted or denied.

Deciding which businesses can operate and which must close during the coronavirus outbreak, which could continue for weeks or months, has enormous implications for businesses, workers, and their families. A waiver could mean the difference between solvency and bankruptcy.

“Imagine having the powers of Thanos to knock out all of your competition with a stroke of a pen, as the governor so effectively managed to do with little notice or outrage,” state Sen. Doug Mastriano (R., Franklin) said in a statement Friday afternoon.

Mastriano is seeking co-sponsors for a bill to allow businesses to reopen if they take certain precautions to reduce the spread of the coronavirus, saying that the waiver process is “flawed, ineffective, lacks accountability, has no oversight, and is riddled with unconstitutional powers.”

The Wolf business dates to 1843 and an ancestor of the governor. The governor was part of the sixth generation to run the business. Based in York, it sells cabinetry, vanity tops, decking and porch materials, outdoor siding, and other products, according to its website.

The company employs more than 350 people, and most work in Pennsylvania, Danielson said.

After winning election in 2014, the governor said he put his assets in a blind trust, and he gave a cousin and former business partner authority to sell shares in the business. A private equity firm announced that it had bought a majority stake in the company in May 2015, and shortly after the sale, Danielson said the governor was no longer a shareholder.

Wolf’s family members aren’t shareholders, either, and none serve on the board, Danielson said. He said, as far as he knows, no Wolf family members work for the business.

The business has taken precautions, Danielson said, setting up remote call centers and reducing the number of warehouse employees working during shifts. He said they are in compliance with the state requirements and shouldn’t have to close.

“All my competitors are open, so how would that be fair just because my name is Wolf?” Danielson said. “Our industry is needed.”

Philip Given, York’s acting director of economic and community development, said Wolf Home Products was one of many companies that city investigators determined was eligible to remain open. The city did not check to see if the company had a waiver.

Given said he believed the business qualified as life-sustaining under at least one of the governor’s categories.

“A lot of those categories are pretty broad,” he said, later adding, “We did not create the list. We are simply referencing and managing the list.”