What the Pennsylvania National Guard does when the governor calls

“There's actually not too much that we can't do." 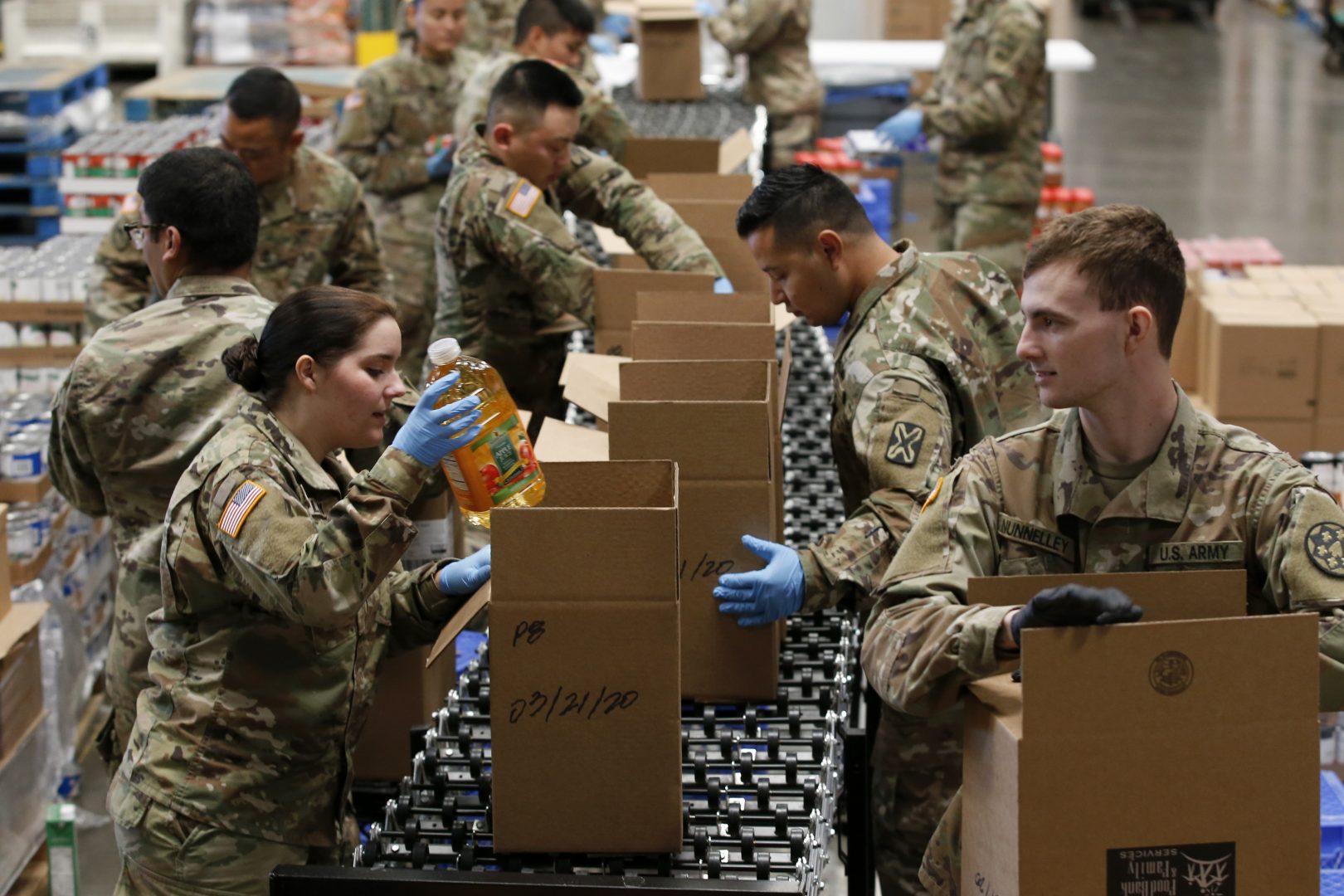 (Fort Indiantown Gap) — More than 8,000 members of the National Guard have mobilized across the United States to help respond to the COVID-19 pandemic. President Donald Trump sent troops to three states hardest hit: California, New York, and Washington. In Pennsylvania, hundreds are already working to support state efforts. So, what do the soldiers and airmen of the guard do when called upon? Here are some answers to common questions: 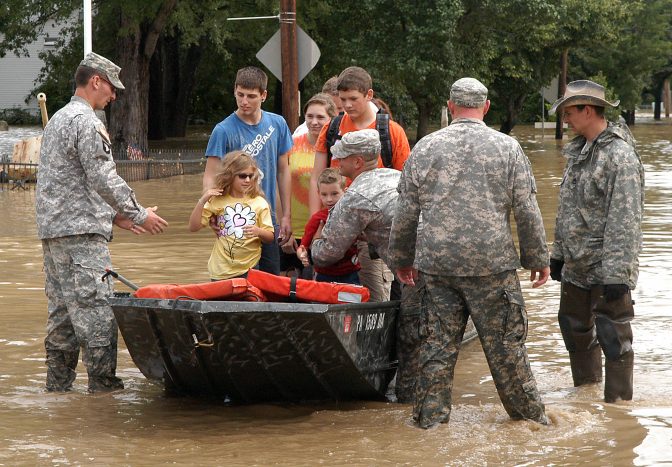 The Army National Guard rescues residents from their home Friday, Sept. 9, 2011, in West Pittston, Pa. As the Susquehanna River and its tributaries in Pennsylvania and New York receded Saturday from some of the highest floodwaters ever seen, tens of thousands of people forced from their homes in the already-soggy Northeast were left to imagine the devastation that awaited them. About 135 water and sewage plants in Pennsylvania were flooded, causing sewage to spill into streams and rivers.

What can the National Guard do?

The National Guard’s job is basically to be ready…for nearly anything. Most soldiers and airmen are part-time, training one weekend per month and two weeks every summer. They can be deployed by the federal government to war zones. They can also be activated by the governor to help with domestic operations, usually during a natural disaster.

What is the Pennsylvania National Guard doing already?

About 500 full time and reserve guard members are helping the state respond to the coronavirus crisis. Some are helping the Pennsylvania Emergency Management Agency (PEMA) plan ahead. Some drove 38 Pennsylvanians home, after they left a cruise ship that dealt with an outbreak. About 80 guardsmen and women are helping direct traffic, screen people and take samples to test for COVID-19 at a drive through site in Montgomery County.  Another 25 unloaded equipment to set up a federal medical station at the Glen Mills School in Delaware County.

Gov. Tom Wolf has said he will not call on the Guard to enforce his orders for non-life-sustaining businesses to close and for people in some counties to stay at home. He said they will be used to carry out health initiatives. 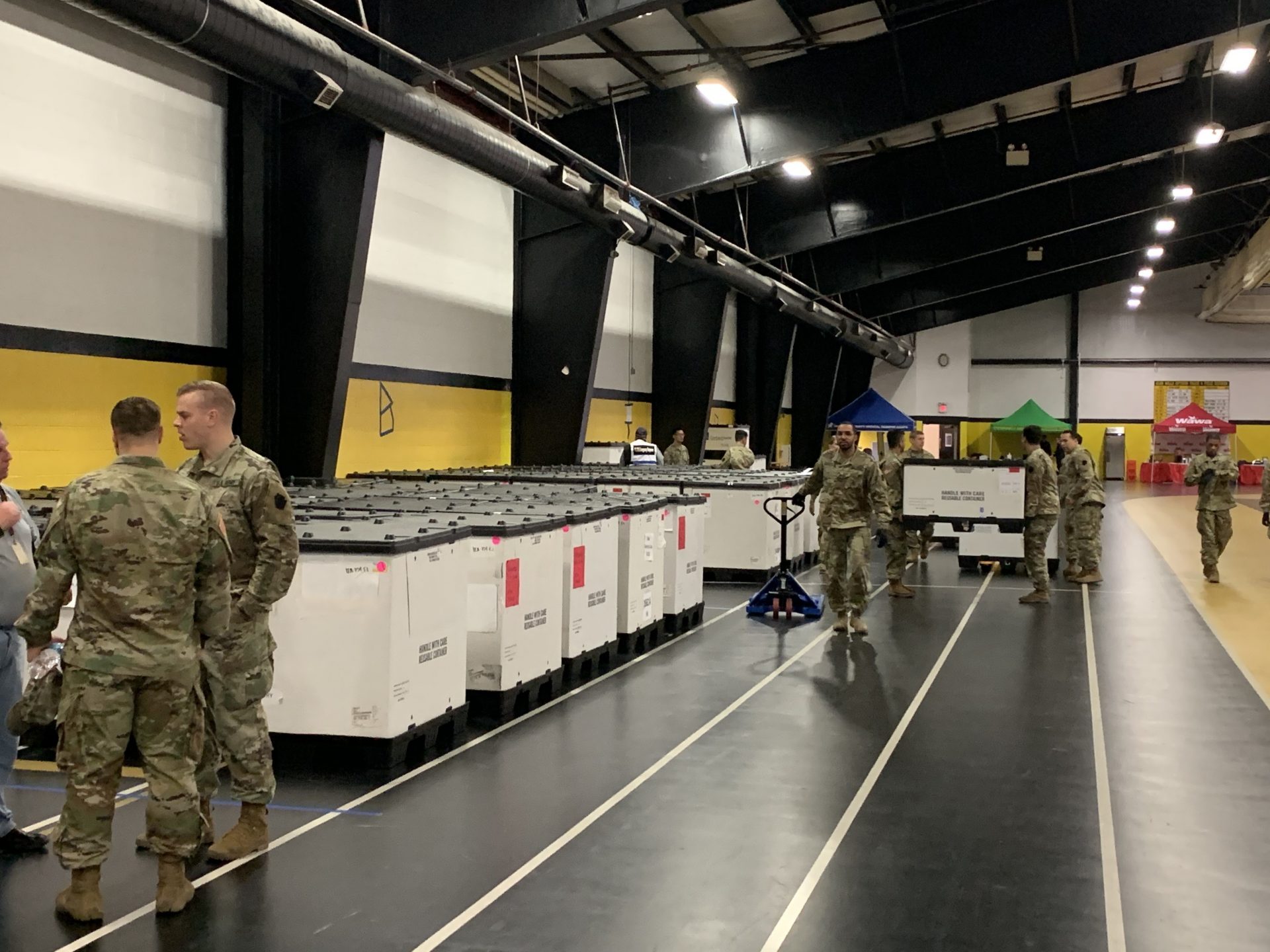 GLEN MILLS, Pa. – Soldiers from the 103rd Engineer Battalion, Pa. National Guard, provide logistical assistance to FEMA at the Glen Mills School where they unloaded federal equipment to establish a federal medical station, from March 28 to 29. Federal, state and local assets are coming together to open this facility which can house non-COVID 19 patients with less severe conditions if and when regional hospitals become full.

What is the Guard prohibited from doing?

“There’s actually not too much that we can’t do. It just has to be done in the appropriate manner,” said Lt. Col. Keith Hickox, public affairs officer for the Pa. National Guard.

The Guard can support law enforcement with crowd and traffic control. Guard members did this during Pope Francis’s visit in Philadelphia in 2015 and the Democratic National Convention in 2016. Soldiers are not usually called to act as law enforcement. They can fill some of those duties under the direction of state and local police, but it is rare. Soldiers generally do not carry weapons during domestic activations.

“The capability sets of the National Guard are so vast and so all–encompassing that there are much better uses, much more constructive uses for the National Guard to be used in facing crisis situations such as this,” said Hickox.

What are typical jobs for the Guard during a domestic activation?

Hickox said the biggest value of the National Guard is the variety of skill sets. Soldiers specialize in fields ranging from medical care to engineering to logistics.

For example, the troops working at the testing site in Montgomery County are trained to work in contaminated environments, so they’re knowledgeable about how to correctly use protective equipment. 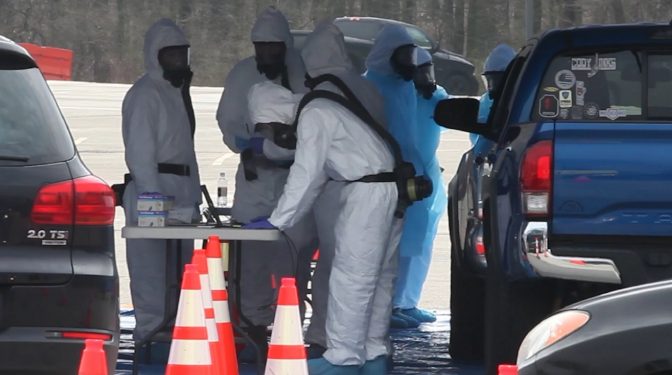 Hickox said some units might be called to create an overflow site for patients, possibly by retrofitting another building. A field hospital has been set up by FEMA and the U.S. Army Corps of Engineers in a convention center in New York City, the epicenter of the pandemic in the United State.

Guardsmen may be called for a more traditional role: transporting goods and people in a difficult environment. During floods and snowstorms, troops have been called to distribute food and water to people cut off from supplies. They could also be used to transport medical workers to where they are needed.

The Guard is a last resort. When state agencies have exhausted their resources and need support, “that’s when the National Guard will be brought into to fill whatever gap is remaining,” Hickox said.

There are about 19,000 soldiers and airmen in the Pennsylvania National Guard. In their civilian lives, many men and women work in other jobs that are in high demand during a crisis, such as nursing and law enforcement. Hickox said coordinators are careful not to pull those people out of their communities during an activation.