This image provided by Fanatics, shows a protective mask for medical professionals made from the fabric of a baseball uniform. Fanatics, the company that manufactures uniforms for Major League Baseball in Pennsylvania, has suspended production on jerseys and is instead using the polyester mesh fabric to make masks and gowns that help fill the dearth of protective wear at hospitals in Pennsylvania and nearby states.

Fanatic is using the polyester mesh fabric for jerseys to make masks and gowns for hospitals in Pa. and nearby states.

(Philadlephia) — The Bryce Harper jersey that could have been worn this baseball season by the biggest Philadelphia Phillies fan is now a protective mask in the fight against the coronavirus pandemic.

Fanatics, the company that manufactures uniforms for Major League Baseball, has suspended production on jerseys and is instead using the polyester mesh fabric to make masks and gowns for hospitals in Pennsylvania and nearby states.

New York Yankees and Phillies pinstripes were still in vogue on baseball’s scheduled opening day— only stitched on the protective wear made by the apparel company.

Michael Rubin, the founder and executive chairman of Fanatics, was watching TV last week when he was struck by the idea to turn the 360,000-square foot facility in Easton, Pennsylvania, into a factory for the COVID-19 virus fight.

While Rubin considered how he could make it happen, St. Luke’s Hospital in Bethlehem reached out to Fanatics late last week about the possibility of the company manufacturing masks. Pennsylvania Gov. Tom Wolf and Attorney General Josh Shapiro each contacted Rubin over the weekend and told Rubin the state was in “dire need” of more masks and gowns.

Fanatics developed a prototype that was approved by the state’s emergency agency and by Tuesday the company halted production of all baseball jerseys.

Rubin, a limited ownership partner of the NBA’s Philadelphia 76ers and NHL’s New Jersey Devils, said he had the blessing of MLB commissioner Rob Manfred to stop producing jerseys. 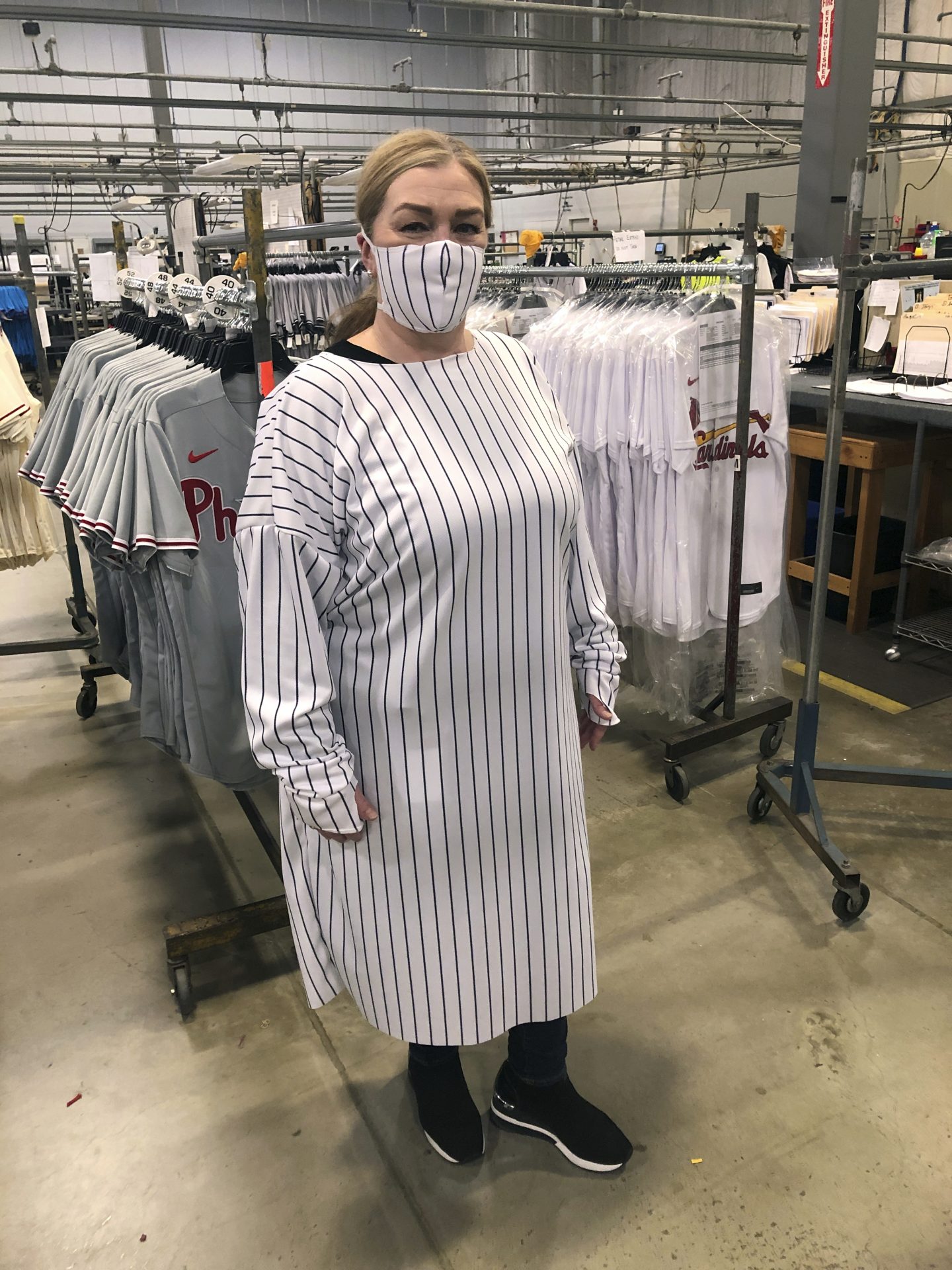 This image provided by Fanatics, shows a model wearing a protective mask and gown for medical professionals made from the fabric of a baseball uniform. Fanatics, the company that manufactures uniforms for Major League Baseball in Pennsylvania, has suspended production on jerseys and is instead using the polyester mesh fabric to make masks and gowns that help fill the dearth of protective wear at hospitals in Pennsylvania and nearby states.

“We’ve got a million yards of fabric that we make these baseball uniforms from, what would you think if we take that fabric and make masks and gowns,” Rubin told The Associated Press. “He immediately said, ‘Great. I want to do it immediately. The most important thing is we’ve got to help the heroes on the front line and baseball can help play a role in it.’”

So with Manfred’s support, production on the $300 jerseys for Harper, Aaron Judge, Mookie Betts and the rest of baseball’s brightest stars was stopped. The company makes the uniforms for MLB and Nike.

Fanatics stated fashioning masks and gowns on Tuesday and Rubin hoped to produce nearly 15,000 masks and gowns a day. Rubin, whose Reform Alliance lobbies for changes to state probation and parole laws, said the demand was for 95 percent masks. The production plant had been shut down as a nonessential business but about 100 workers have returned to work for Fanatics.

The company is making Level 1 masks, used for low-risk, nonsurgical procedures that are the accepted standard for surgical and procedural use.

Rubin said Wolf told Fanatics they would pay for the masks and gowns. Rubin, though, said he spoke to Manfred and Fanatics teamed with MLB to provide hospital uniforms at no cost to those in need in Pennsylvania, New Jersey and New York.

Rubin, who has a net worth of $2.3 billion according for Forbes, said it would cost Fanatics about $3 million to make the masks and gowns and the company would produce at least 1 million over the course of several months.

And if you are one of the few Phillies fans left who doesn’t have a Harper jersey but want one?

There was a bit of a dust-up this week when the Devils and 76ers did an about-face on cutting salaries for employees making more than $100,000. A day after announcing the temporary 20% pay cuts because of the economics effects of the coronavirus pandemic, the teams’ co-owners rescinded them.

But when it comes to Fanatics assisting in the coronavirus fight, Rubin added, “we’re less worried about manufacturing jerseys and more worried about just saving lives.”