A UPS driver returns to his truck, Friday, March 20, 2020, in Pepper Pike, Ohio. Ohio now says it has received 139,468 unemployment insurance benefit applications online this week. The U.S. Small Business Administration approved Ohio's application for access to low-interest loans of up to $2 million for businesses and nonprofits affected by the coronavirus' impact on the economy.

(Washington) — A record 3.28 million Americans filed for unemployment benefits last week as the coronavirus pandemic shut down much of the country. The Labor Department’s report Thursday was one of the first official indicators of how many people have suddenly been forced out of work nationally.

Federal Reserve Chairman Jerome Powell, appearing on NBC’s Today Show, said what businesses and analysts already know: “We may well be in a recession.”

“This is a unique situation,” Powell added. “People are being asked to close their business, to stay home from work, and to not engage in certain economic activity, and so they are pulling back. At a certain point, we will get the virus under control and confidence will return.”

The staggering jobless claims figure was well above the levels seen during the darkest days of the Great Recession, and the worst isn’t over yet, economic forecasters say.

The crisis has cut a giant swath through the energy, travel, transportation, hotel and restaurant sectors, with large and small companies suddenly forced to furlough employees.

States that depend heavily on tourism, such as Nevada and Florida, as well as oil-and-gas towns like Midland, Texas, will be especially hard hit, but the damage will be felt almost everywhere, according to a Brookings Institution report.

The hotel industry alone has lost as many as 1 million jobs this month, the American Hotel and Lodging Association says.

“It is a huge shock and we are trying to cope with it and keep it under control,” says James Bullard, president of the Federal Reserve Bank of St. Louis. Earlier this week, he said unemployment would hit 30%. But he tempered those remarks Wednesday, saying he expected the number to fall again quickly.

The Economic Policy Institute had estimated 3.4 million people filed for first-time claims during the week ending March 21. That compares with an average of 225,000 a week during the past six months. 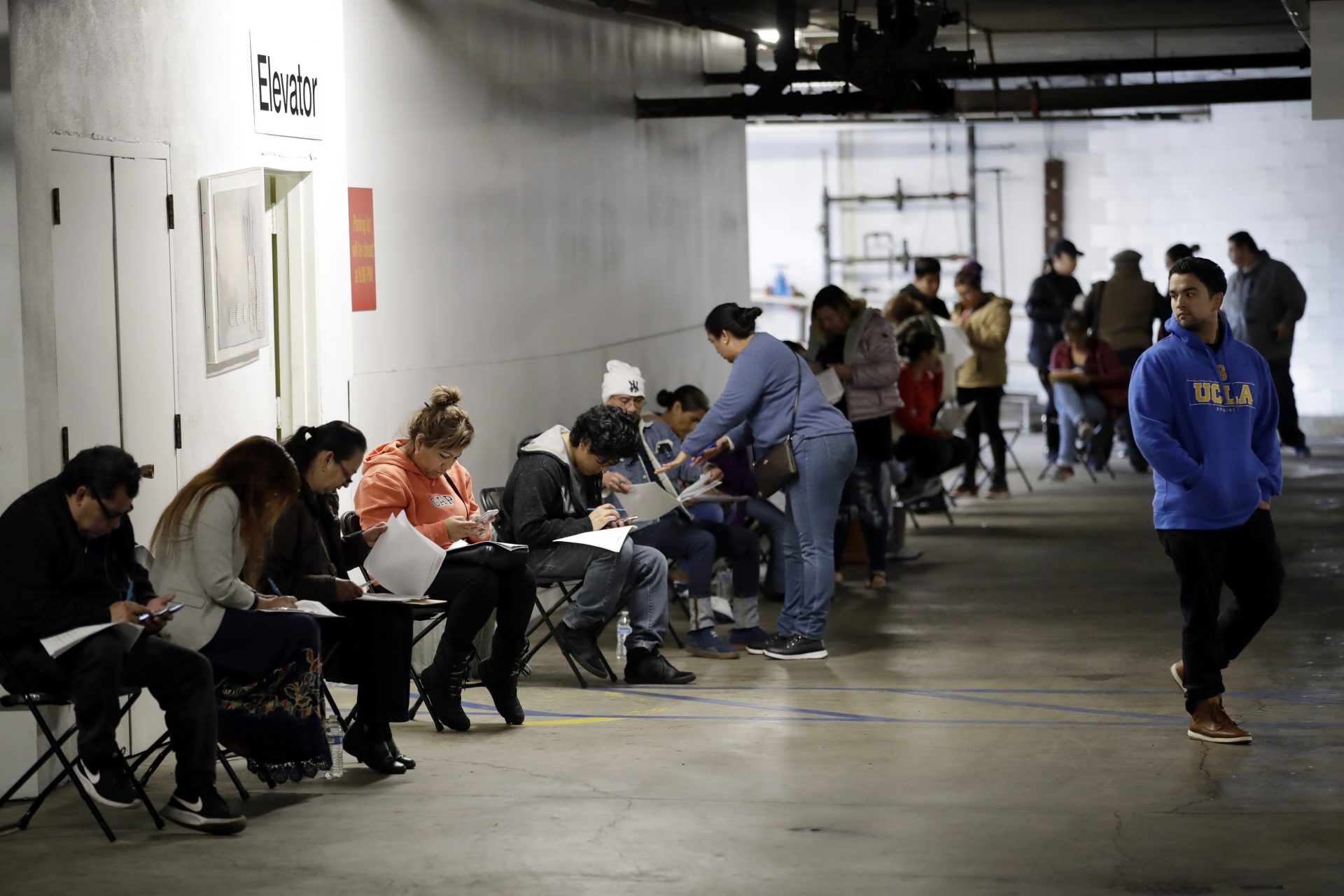 Unionized hospitality workers wait in line in a basement garage to apply for unemployment benefits at the Hospitality Training Academy Friday, March 13, 2020, in Los Angeles. Fearing a widespread health crisis, Californians moved broadly Friday to get in front of the spread of the coronavirus, shuttering schools that educate hundreds of thousands of students, urging the faithful to watch religious services online and postponing or scratching just about any event that could attract a big crowd.

“Most historical comparisons of this scale are inadequate,” said Daniel Zhao, an economist with Glassdoor. “The coronavirus outbreak is economically akin to a major hurricane occurring in every state around the country for weeks on end.”

The loss of that many jobs is expected to push unemployment to 5.5% — a level it last reached in 2o15 — but it’s likely to climb even further. Goldman Sachs has predicted that the jobless rate could approach 13% during the next few months.

“If the number of new claims is as high as predicted and if it remains high in coming weeks, unemployment will skyrocket,” the Joint Economic Committee of Congress said in a report ahead of Thursday’s data.

The collapse of the job market has been unprecedented in size and speed.

Adam Hill of Worcester, Mass., worked until recently as a graphic designer at a company that organizes trade shows.

“A couple of weeks before this happened, we had a [company] meeting where we heard about how we did the previous year, and revenue was up. Everyone was pretty excited for the next year,” he says.

Hill says he expects to be called back to work when the economy recovers, but no one is sure when that will be.

In the meantime, the Senate has approved a $2 trillion economic relief package that broadly expands unemployment benefits, extending them to gig workers and freelancers. It includes more generous benefits and extend eligibility for benefits by 13 weeks. A House vote is expected by Friday.