Three food trucks line up in a lot for people to buy take out dinners, Thursday, March 19, 2020, in the Ross Township suburb of Pittsburgh. They we giving people an option since restaurants with indoor dining areas are closed in efforts to slow the spread of COVID-19.

Your afternoon update on the coronavirus in Pa.: Wolf grants series of exemptions to order closing ‘non-life-sustaining’ businesses, delays enforcement

'We’re going to do the best we can to prevent our hospital system from crashing,' Wolf said Friday afternoon 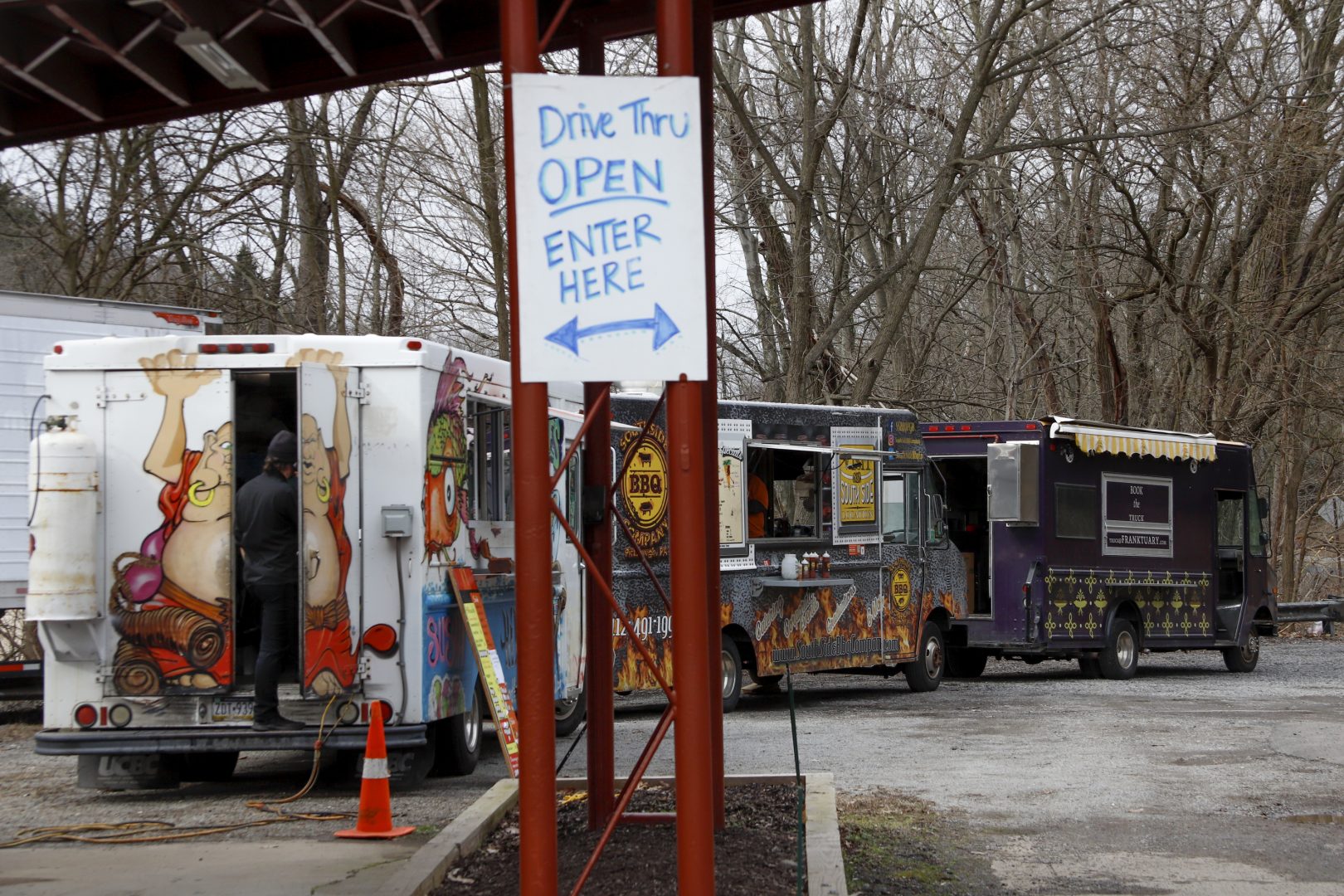 Three food trucks line up in a lot for people to buy take out dinners, Thursday, March 19, 2020, in the Ross Township suburb of Pittsburgh. They we giving people an option since restaurants with indoor dining areas are closed in efforts to slow the spread of COVID-19.

HARRISBURG, Pa. (AP) — Under fire from business groups and Republican lawmakers and facing lawsuits over a broad shutdown order designed to slow the spreading of the coronavirus, Gov. Tom Wolf’s administration defended its actions as critical to preventing hospitals from being overwhelmed, but it also made a series of concessions.

And late Friday, the administration said that because so many businesses have requested waivers, it would delay enforcement of the shutdown until 8 a.m. Monday. Enforcement had been set to start after midnight Saturday.

Wolf defended the order — issued late Thursday to sharpen an earlier directive — by citing big, daily upticks in the number of coronavirus cases and declaring, “I cannot allow these surging numbers to overwhelm our people, our health care workers and our hospitals.”

Forcing tens of thousands of businesses to shutter their doors indefinitely will mean that fewer Pennsylvanians will become sick and fewer will die, he said.

Even before Thursday’s order, skyrocketing unemployment compensation filings in Pennsylvania this week smashed the state record, underscoring how many businesses had already closed or shed workers.

Wolf, a Democrat, said his “heart goes out to everybody in our commonwealth,” but he also said difficult decisions now will make it easier later.

“These are uncharted waters and, in this situation, we’re not going to do everything perfectly, but we’re going to do the best we can to prevent our hospital system from crashing,” Wolf said in a news conference.

It was among the toughest actions by a U.S. governor to combat the spread of COVID-19. But it drew loud complaints that it threatened critical supply chains and economic devastation, and a law firm and a gun store challenged it in court.

Wolf also said there’s a “robust waiver process” for businesses that believe they should be exempt from the shutdown order.

Still, it remained unclear Friday whether cities, counties or towns would go along with the order and use police or sanctions to close businesses that defied Wolf’s order.

The Health Department reported a sharp rise in the number of confirmed cases on Friday, adding 83 in the past day for a total of more than 260. There has been one death from COVID-19 in the state.

Health Secretary Rachel Levine said cases will continue to surge and that the Wolf administration is working with hospitals to determine their capability to handle such an increase and looking at every option to add bed space, staffing and supplies.

Levine also said they are looking at whether beds for patients with less serious ailments can be created in hotels. Wolf’s administration also has asked hospitals to postpone elective procedures.

For most people, the new coronavirus causes only mild or moderate symptoms, such as fever and cough. For some, especially older adults and people with existing health problems, it can cause more severe illness, including pneumonia. The vast majority of people recover.

Meanwhile, schools have been shut down through March, at least, statewide student assessment tests have been canceled for the year and unemployment claims have skyrocketed.

In one lawsuit, a Harrisburg-area law firm challenged his right to shutter law offices throughout the state.

By ordering law firms to close their doors, Wolf deprived citizens of their right to counsel, lawyer William Costopoulos argued in court papers. Costopoulos’ petition noted that the high court, in ordering the closure of state courts this week, creating several exceptions for emergency petitions involving custody, protection from abuse and other matters.

In an interview, Costopoulos also said the executive branch doesn’t have a right to meddle in the judicial.

The second suit, filed on behalf of a law firm, a gun shop and a would-be gun buyer, asked the Supreme Court to stop Wolf from shuttering businesses determined to be “not life sustaining,” arguing he lacks that authority under state law.

The suit said the state’s gun shops “have been left with insufficient guidance as to their potential status as ‘life sustaining.’”

The Pennsylvania Manufacturers’ Association president, David Taylor, said the order wasn’t discussed beforehand with any trade associations or business groups, which could have pointed out flaws in his plan.

The Pennsylvania Chamber of Business and Industry said Friday it was pressing for changes to the order, and Wolf’s administration did make at least one change Friday, allowing laundromats to remain open, and a clarification that hotels can stay open.

Wolf’s order said more than 150 types of businesses had to close their physical locations. He said the order would be enforced by state troopers, local officials, the state Health and Agriculture departments and the Liquor Control Board.

Businesses that do not comply can be cited, fined, have their licenses suspended and forfeit disaster relief, the administration has said. Criminal charges are also possible, the governor’s office said.

Among those allowed to stay open are gas stations, grocery stores, beer distributors, drugstores and building materials stores. Restaurants and bars can continue to offer carry-out, delivery and drive-thru food and drink service, but not dine-in service.

Businesses under shutdown orders range from coal mines to building contractors to many types of manufacturers, along with professional offices, such as law firms and accounting offices.

Even within the shrinking number of retail outlets, practices were changing rapidly. Convenience store giant Wawa said Friday that its coffee and fountain drinks were no longer available as self-service.

The federal courthouse in Harrisburg has been closed indefinitely because a federal law enforcement agent tested positive for COVID-19 and others are showing symptoms.

The chief judge’s order, posted Thursday, said the U.S. district court remains open, but proceedings scheduled for Harrisburg will be held instead in Williamsport or Scranton.

Disclosure: The Associated Press receives support for health and science coverage from the Howard Hughes Medical Institute’s Department of Science Education. The AP is solely responsible for all content.