Magdaleno Corona puts on gloves at his fruit stand in South Philadelphia.

In Philadelphia, where 23% of residents speak a language besides English at home, the city has not been translating and disseminating information to these communities. 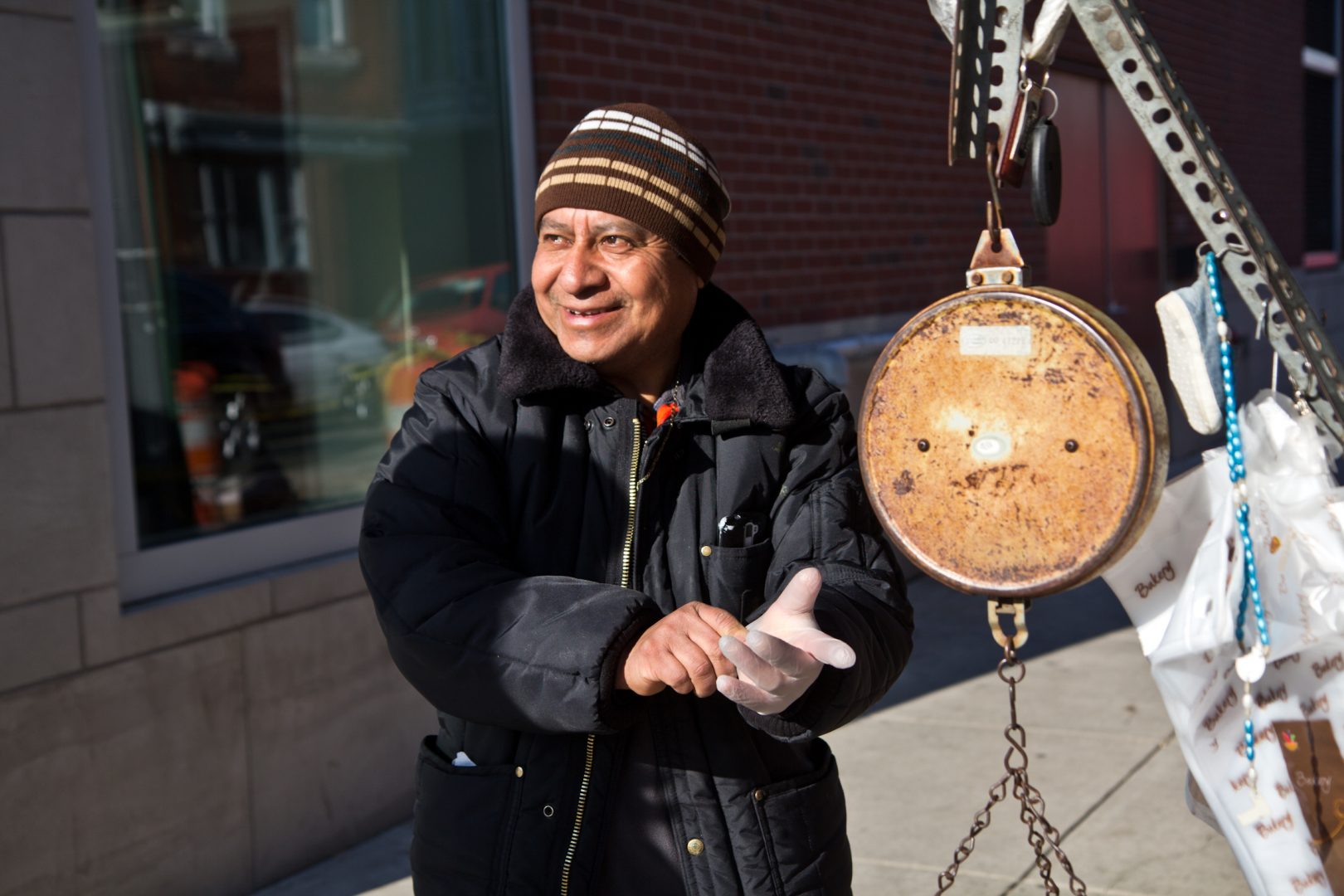 Magdaleno Corona puts on gloves at his fruit stand in South Philadelphia.

(Philadelphia) — Official information about the impact of coronavirus in Philadelphia has come in dizzying waves, with new cases, restrictions and updates announced at sometimes breakneck speed.

But almost all of it has been in English.

In Philadelphia, where 23% of residents speak a language besides English at home, most commonly Spanish, the city has not been translating and disseminating information to these communities as updates happen. That’s raised concerns that large portions of the city are not getting critical information about how to avoid spreading the virus or how to access available support.

“We are extremely concerned about the lack of an official City of Philadelphia Spanish speaking spokesperson” to help share timely information about the pandemic, wrote the leaders of nine Latinx-serving community groups to Mayor Jim Kenney on Monday. “We know the City can do more.”

Every day, the city has been holding a press conference to update the public featuring American Sign Language interpretation. Local Latinx community organizers have been asking why that can’t be done for Spanish, the second most commonly spoken language in Philadelphia.

On Wednesday, city managing director Brian Abernathy announced that a Spanish-speaking representative would be available to speak after the City’s English-language press conference finished. 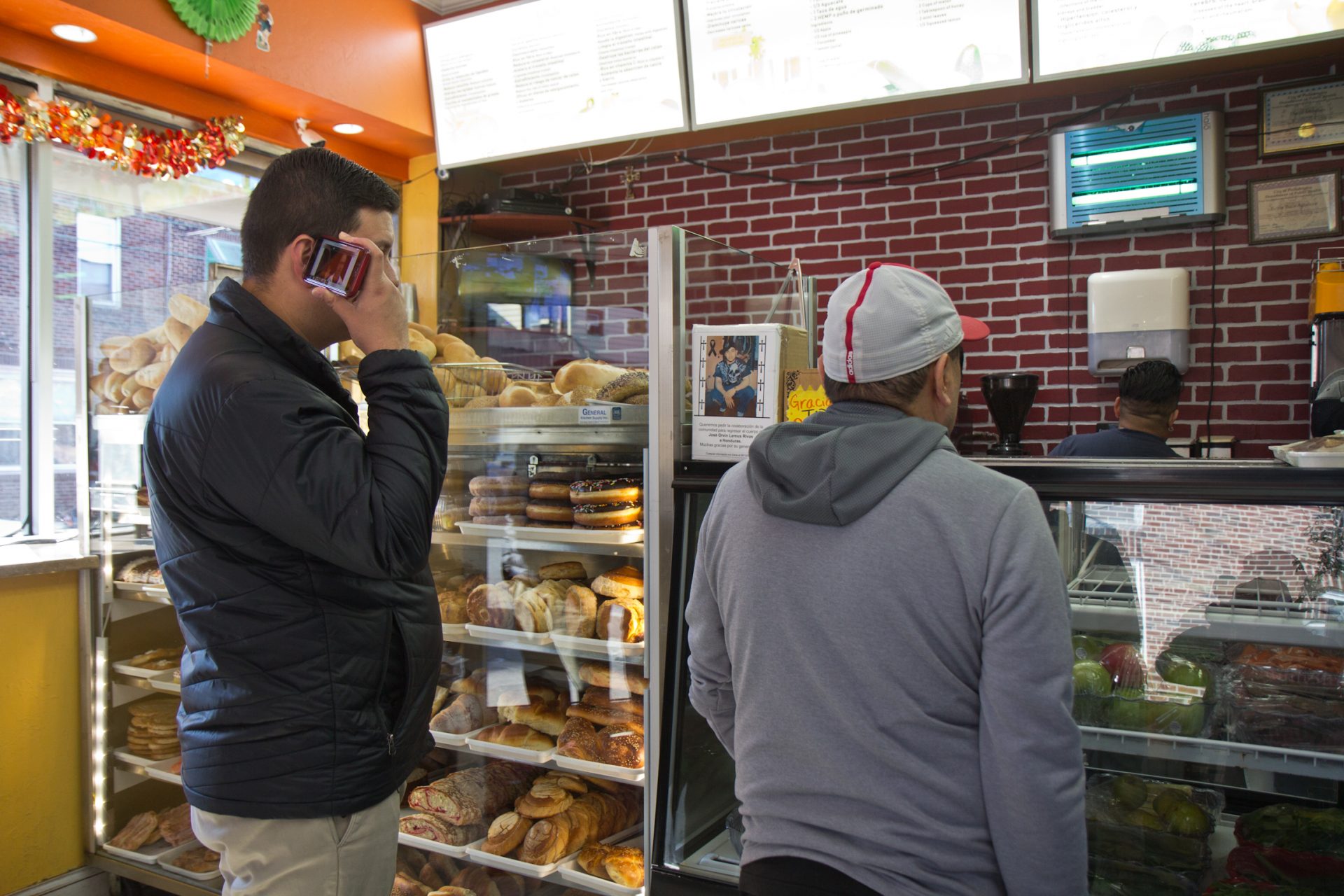 Customers stand in line in Rosa’s bakery in South Philadelphia.

The concern among advocagtes is not just about misinformation, but about communicating the severity of the pandemic and the resources available to those who are sick or losing work.

On Wednesday morning, fruit stand operator Magdaleno Corona said he gets a lot of information from a WhatsApp group he belongs to with other people from his church. He wants to continue working for as long as he can, he said, although business is “a little slow right now.” His adult children work in restaurants, and have already lost their jobs.

“Right now, we are all panicking,” he said, but he puts his faith in what God has in store for him.

Las Rosas Bakery in South Philadelphia bustled on Wednesday with customers buying bread, coffee and pastries from the counter.

“Everyone needs bread. They buy it and take it to go,” Meneses said. “We just have to keep everything clean and wash our hands constantly.”

He stays up-to-date by watching TV and listening to the radio, but thinks it would be good if there were more information given to Latinx businesses about supplemental programs for those who are having trouble getting through this emergency.

At the end of the interview, he stuck out his hand for a shake and said, “No tenga miedo, no pasa nada.”

“Don’t be afraid. Nothing is going to happen.”

The city said it is doing its best to keep up with the rapidly changing situation. Some press releases are being translated into Spanish and simplified Chinese. Officials are also translating some social media posts into Spanish, and have sent out a few text alerts from the Office of Emergency Management in Spanish.

While students are out of school, they can still find free meals and safe spaces near them.

Even so, the lion’s share of information is shared in English, with translation often coming hours later if at all, and the vast majority of the city’s approximately 145 languages spoken at home are not covered.

“It is important to mention, as the health department moves from containment to a mitigation stance, we are in the process of rewriting almost everything,” said city spokesperson Irene Contreras Reyes. “Given the rapid change in guidance from the city, state, and federal government, it is a challenge to keep on top of publishing materials. But we will continue to try to improve the turnaround time.”

To make sure their communities are informed, some city residents are scrambling to set up their own translation networks on the fly.

Organizers of Philly Boricuas, a Puerto Rican grassroots organization, launched the Facebook page “Coronavirus recursos para la comunidad,” after learning that the city was not making much of the coronavirus information available in Spanish in real-time.

“I find it to be totally unacceptable,” said Vanessa Maria Graber, who works for PhillyCAM and is also an organizer with Philly Boricuas.

The Facebook page gathers information from official sources, “people who have access to knowledge to those resources, that work for government, that work for non-profits, that work in public health,” said Graber, and get them translated into Spanish as quickly as possible.

She said she hopes to recruit more small business owners who have questions, and people in government who have access to information, as well as provide more information about testing and unemployment benefits.

The throughline in all of these efforts is an attempt to dispel what some see as a dangerous trend: their friends and family members not taking necessary precautions.

Raised in both North Philadelphia and the Camden area, Valerio said, along with her other responsibilities, she works at her dad Ricardo’s restaurant, Campo Sano, in Pennsauken.

Apart from extra cleaning, she said the business has not made changes. Customers still stream in, and many she spoke with also seemed not to realize the severity of the coronavirus pandemic.

“Most of them think it’s like the common cold,” she said.

Through Resolve Philadelphia, a collaborative journalism project leveraging more than 20 local newsrooms including WHYY, Kensington Voice has launched a site to translate local news stories about the coronavirus into Spanish in response to concerns raised by Valerio.

She gets emotional when talking about being able to mobilize on behalf of her family and community.

“This is a norm for me. I grew up having these issues” where her family was not the target audience for official communications, and was left out, she said. “It’s overwhelming for me because for the first time in my life, I have access to tools and people who are actually trying to make a change in these people’s lives.” 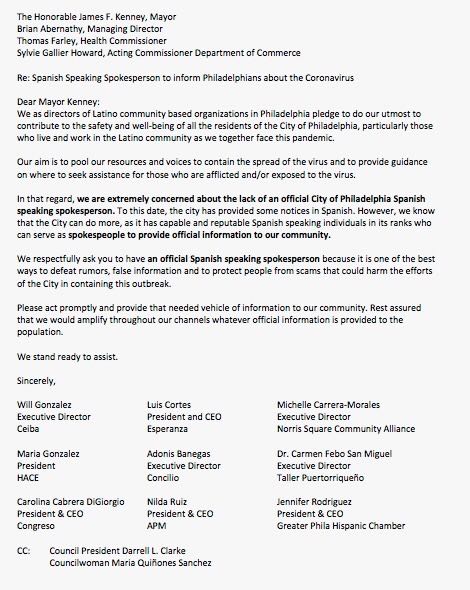