The YWCA York closed its child care center operations and has not applied for a waiver from the state.

Child care providers across Pennsylvania face a choice in response to the state’s efforts to halt the spread of the coronavirus: Close their doors, or seek permission to stay open.

Some clarity was provided by the state’s Office of Child Development and Early Learning later on Monday and in the following days. The agency said it is accepting waiver requests from child care centers that serve health care workers, first responders and other people considered essential personnel. (Home-based care providers that serve only a handful of children can continue without a waiver.)

As of Wednesday morning, the office had received about 1,000 waiver requests — 200 of which it processed, Barber said she learned from state officials. A department spokesperson later confirmed those numbers but did not provide additional detail.

There are about 4,900 child care centers across the state, Barber said.

The biggest frustration for operators now is not knowing when the state will allow child care centers to re-open, and how centers will manage to stay afloat in the interim.

“This is a field that works on thin margins,” Barber said, a reference to the fact that many providers don’t make much in profit and may not have a cash cushion to wait out the closure orders.

The state is going to continue to pay providers the money they would have normally received to care for the children of low-income families that rely on the Child Care Works subsidy through at least April. But the longer the coronavirus epidemic lasts, the more money providers will lose from families who don’t qualify for the subsidy. 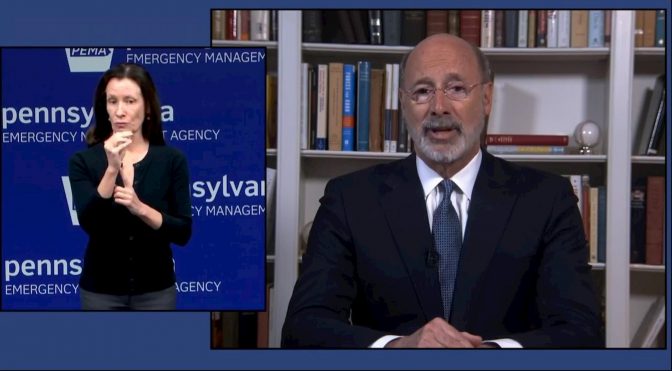 Gov. Tom Wolf delivers a video address from his home in York County on Wednesday, March 18, 2020. His remarks were simultaneously translated into American Sign Language by a state employee in Harrisburg.

One child care provider, Tender Years, shut down its three locations in Cumberland and Dauphin counties on Tuesday in response to Wolf’s order.

Kim Shearer, who owns the business with her brother, said they applied for a waiver, based in part on how close their three locations are to hospitals, including Geisinger Holy Spirit and the Penn State Health Milton S. Hershey Medical Center.

Part of that stress is dealing with competing concerns from parents and employees, Shearer said. Some parents are desperate to have a place to leave their kids while they work, and some employees are equally dependent on the income they earn from Tender Years. But Shearer said she also had parents who decided to make other child care arrangements or keep their kids at home, and some of her workers have said they want to stay home for fear of contracting the virus.

Enrollment is about 150 at each of the Tender Years’s three locations, but fewer than half the children attended after its locations reopened on Wednesday.

In response to the coronavirus, Sharer’s center added screening procedures. Staff members check each other and students for symptoms and take temperatures. Her center receives tuition at the start of each week, so Shearer told staff members that she could still pay them normally this week.

“But every week moving forward is going to be different, and we’ll have to take that as it comes,” Shearer said.

In Erie County,  Little Acorns Learning Center, which cares for about 50 children, closed its doors on Tuesday. Owner and director Arlene McMahon said her employees have applied for unemployment compensation and she isn’t being paid now.

She said she talked the issue over with her staff and decided not to apply for a waiver.

“Our biggest fears were, one, our staff coming down with something, and two, what happens if we open and then we have to close again in three days because we have a case here? “ McMahon said. “We did not want to risk that. We wanted some stability for the families.” 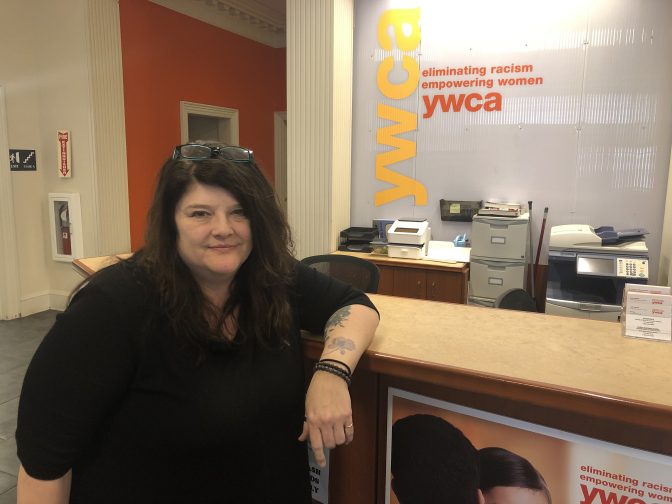 Ruby Martin is chief child and youth program officer for the YWCA York.

State officials to Pa. farmers: “We need local agriculture now more than ever.”