A man shops in an aisle of mostly empty shelves in a Walmart in Cranberry Township, Pa., Friday, March 13, 2020.

Statewide, there are 41 presumptive positive cases and six confirmed cases of COVID-19. 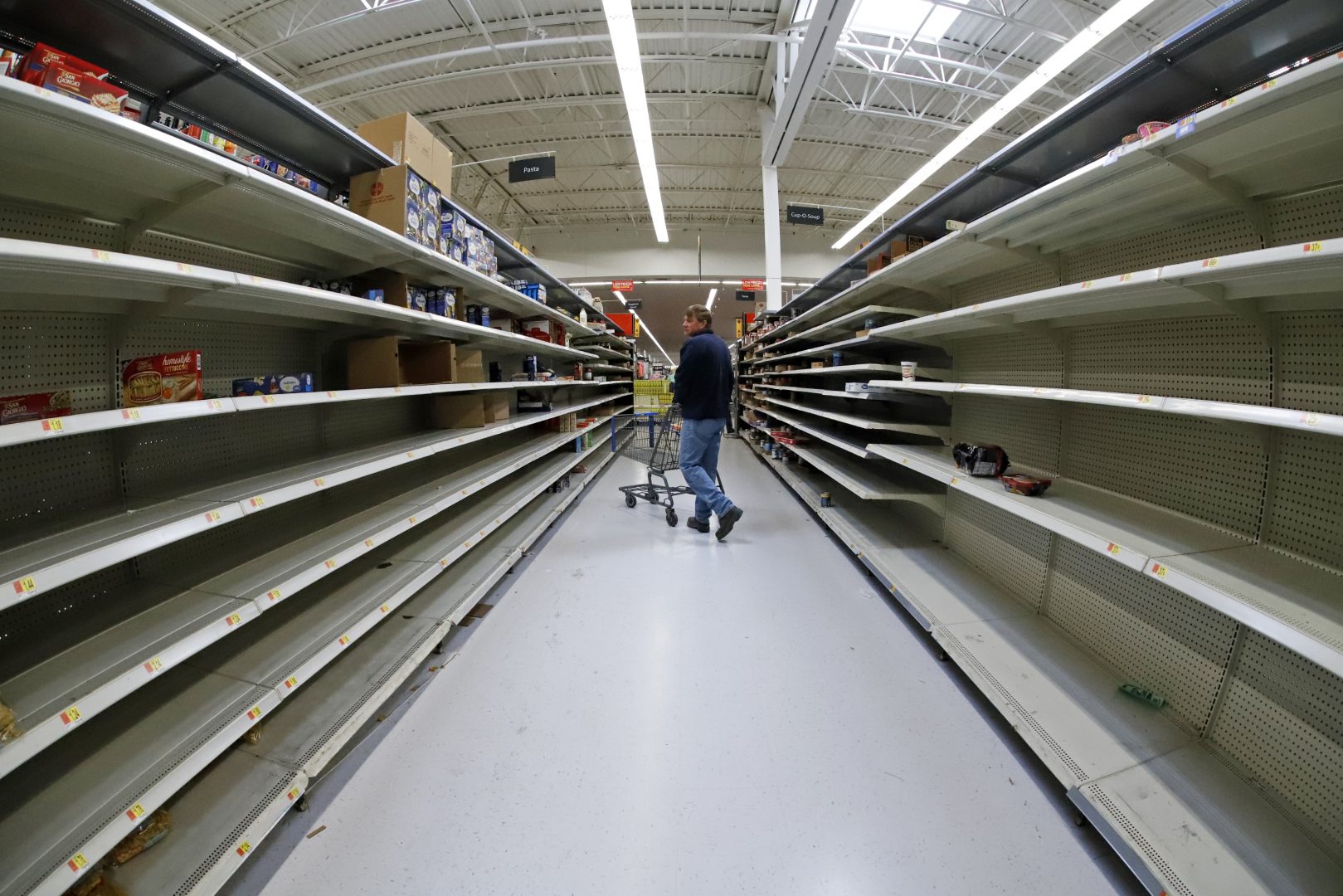 A man shops in an aisle of mostly empty shelves in a Walmart in Cranberry Township, Pa., Friday, March 13, 2020.

On Saturday, Wolf added Bucks and Chester counties to the list of counties where he is ordering and recommending the closure of more community centers. Montgomery County, which leads the state for coronavirus cases, was the first county to be put on under enhanced restrictions. Wolf added Delaware County on Friday.

The mitigation efforts for Bucks and Chester counties begin Sunday.

“We’re taking these measures with the idea that this is going to slow the spread of COVID-19,” Wolf said, “and as such is going to keep Pennsylvanians safe.”

On Friday, the governor ordered the closure of all Pennsylvania K-12 public schools for two weeks. Pedro Rivera, the state education secretary, said a common question is how students will access meals while schools are closed.

He said the state has received approval from the federal government to allow schools to distribute meals at no cost while schools are closed. Districts must first apply to the Pennsylvania Department of Education.

“We have staff working throughout the weekend and around the clock to expedite approvals,” Rivera said.

In Delaware and Montgomery counties, the state has already ordered the closure of driver licensing centers and county assistance offices, and it is now doing the same for Bucks and Chester counties.

The Pennsylvania Liquor Control Board on Saturday also announced the phased closure of all 88 state-run wine and liquor stores in those four counties. All of those stores will be closed in Bucks, Montgomery, Chester and Delaware counties by Tuesday.

But Wolf says he is stopping short of making those closures mandatory.

“The reason we’re not making it mandatory is because the real responsibility here lies on people making the right decisions voluntarily,” Wolf said. “…There are so many subtle differences, between businesses, between families, between situations that I think it would be a almost capricious exercise for any government to make a one-size fits all announcement.”

Wolf said he has the power to make such an announcement, but he doesn’t think it would be very effective. “I think the most effective way to handle this is to say to the people, businesses, families of Pennsylvania, ‘Let’s do the right thing,’ ” he said.

The state considers supermarkets, pharmacies, and gas stations essential businesses and the Wolf administration says they should stay open.

The state House and Senate are scheduled to return to their legislative session in Harrisburg next week. They are expected to take action to provide assistance to communities dealing with the coronavirus, although leaders of the GOP-controlled General Assembly and the Wolf administration haven’t announced details.

One question that has loomed is what to do about three special elections for state House seats scheduled for March 17. Two of the seats are in western Pennsylvania, and the other is in Bucks County.

During the Saturday news conference, Wolf said he believed there was agreement on pushing back the Bucks County special election, although there wasn’t agreement on a date.

But in a statement after the news conference, House Speaker Mike Turzai said the special elections will take place as scheduled on March 17. Turzai said the Board of Elections in Bucks County plans to sanitize and protect voters as much as possible, similar to how grocery stores, restaurants and other businesses are taking protective measures. Voters are encouraged to bring their own blue or black ball point pens, he said.

“The impact of the COVID-19 virus is being felt by all of us, and I applaud the statewide efforts to practice social distancing and increased disinfecting in public spaces. These same practices will be in place on election day, but they do not require the rescheduling of the special elections,” Turzai said. “When you consider that absentee ballots have already been applied for and returned, these elections are already underway.”

Three Pa. special elections are planned for Tuesday despite the coronavirus