A staff member blocks the view as a person is taken by a stretcher to a waiting ambulance from a nursing facility where more than 50 people are sick and being tested for the COVID-19 virus, Saturday, Feb. 29, 2020, in Kirkland, Wash. Health officials reported two cases of COVID-19 virus connected to the Life Care Center of Kirkland. One is a Life Care worker, a woman in her 40s who is in satisfactory condition at a hospital, and the other is a woman in her 70s and a resident at Life Care who is hospitalized in serious condition. Neither have traveled out of the country.

How ready is Philadelphia for the coronavirus?

March 2, 2020 | 5:26 AM
The coronavirus outbreak
What you should know
» Map: Where the virus has spread
» What we know about the outbreak
» How to prepare your home for coronavirus
» Coronavirus FAQs

(Philadelphia) — Last week, the Centers for Disease Control and Prevention issued a chilling warning about COVID-19, the deadly respiratory virus that has so far killed nearly 3,000 people around the world.

As a result, the CDC is encouraging U.S. businesses, health care systems and communities to prepare for a local outbreak.

How prepared is Philadelphia?

“On a scale of 1 to 10, I think it’s around a 6 or a 7,” said René Najera, an epidemiologist and editor of the History of Vaccines project at the College of Physicians of Philadelphia. “To reach a 9 or a 10 on the preparedness level, it requires knowing the unknowns. And unfortunately, there’s too many unknowns right now.”

Central to those unknowns is the nature of the illness itself. Scientists in the United States are still struggling to get a handle on how the coronavirus is transmitted, the nature of COVID-19’s symptoms, how to treat patients and the actual death rate.

Data from China points to a few trends — men are more likely to contract COVID-19 than women; older people, especially men, are the most likely to die; and children are the least likely to be infected. But those statistics are confounded by a number of factors, including the high smoking rate among men in China.

“We think that smoking predisposes a person to have complications from any kind of respiratory disease,” Najera said. “And that may be the case here.”

Also unknown: when the coronavirus is likely to hit our area, though Najera offered a rough estimate.

“Everything says in the next six to eight weeks, we’ll have it full-blown,” he said. “And then, from there, who knows? Because again, it’s coronavirus — it’s not the flu — so we don’t know how it’s going to behave.” 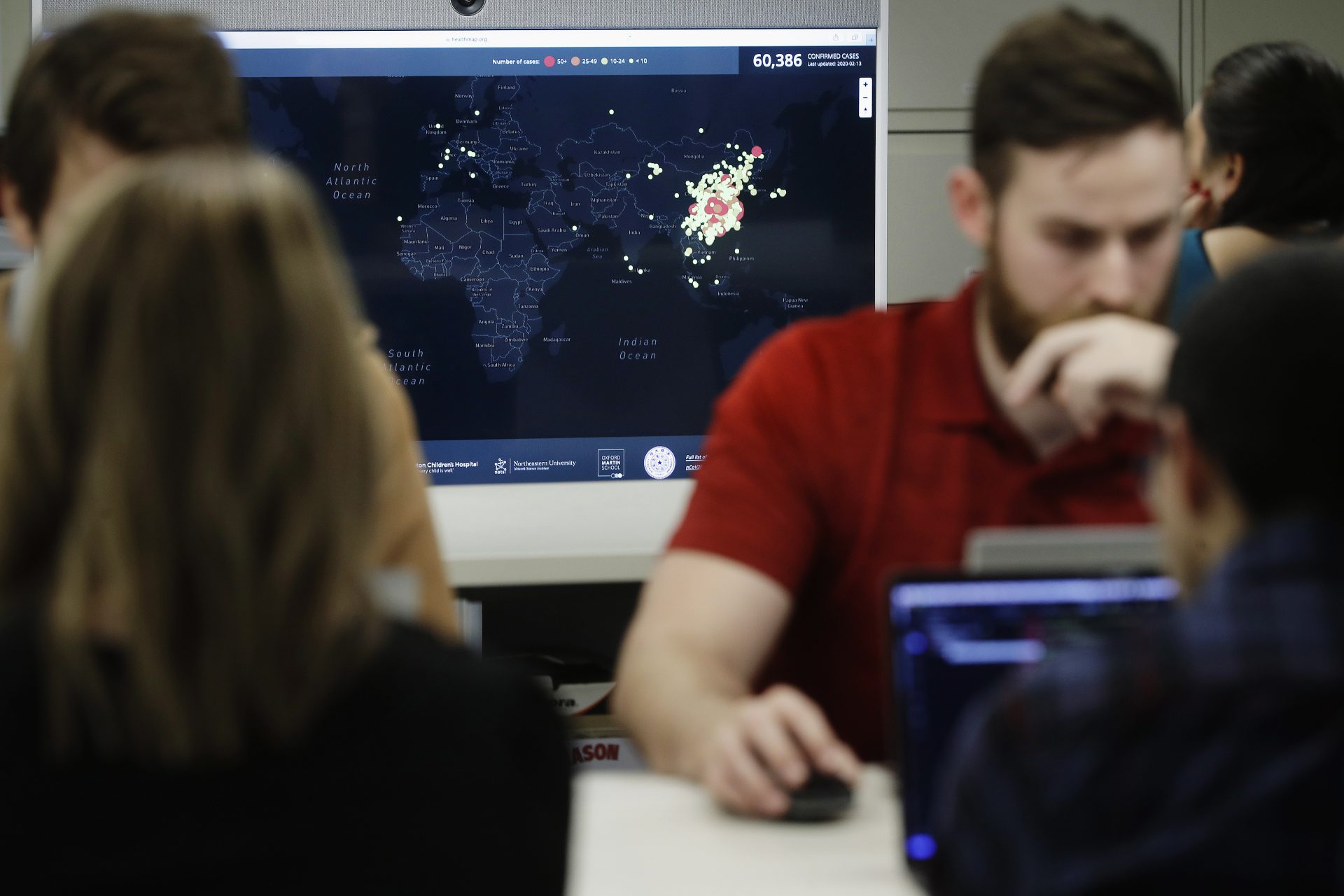 In this Thursday, Feb. 13, 2020 photo, Kyle Martin, a worker at HealthMap, a system using artificial intelligence to monitor global disease outbreaks, mines health data to keep the system up to date in a work area at Boston Children’s Hospital in Boston. Early warnings of an emerging epidemic, some of them collected by HealthMap, showed AI’s potential for giving global health experts a head start when bureaucratic hurdles and language barriers might get in the way. A screen behind displays a world map with colored dots marking cases of the disease known as COVID-19.

But we do have a sense of where, as a city, we’re strong and where we’re not — thanks, in part, to the Philadelphia Pandemic Preparedness Project, a research group that’s spent the last year and change doing a deep dive into Philadelphia’s emergency preparedness.

“Philadelphia’s in good shape,” said Harvey Rubin, an infectious disease specialist with the University of Pennsylvania who leads the group. “We have an outstanding medical system in Philadelphia. We have incredibly highly trained health care workers.”

Najera said Philadelphia may not be as prepared as cities like New York that have previously dealt with large-scale emergency situations, but it’s got several advantages.

“The fact that it’s a city, so it has hospitals,” he said. “It has institutions that are very strong; it has a coordinated fire and EMS and police system, so they can respond to the emergencies. So that really helps.”

He added that a sense of community is also important.

“If you’re in the community, you’re more likely to help out each other and go through this together,” he said.

But Philadelphia also has vulnerabilities — for one thing, its geography.

“Philadelphia is right on the I-95 corridor,” Najera said. “And so you have people traveling up and down, in the thousands if not millions, that go up and down and go through the city every day or every week. And so you’re going to have a lot of people that have been somewhere and likely, as this spreads, you’re going to have people coming into Philadelphia that had been somewhere where the virus has already taken hold.” 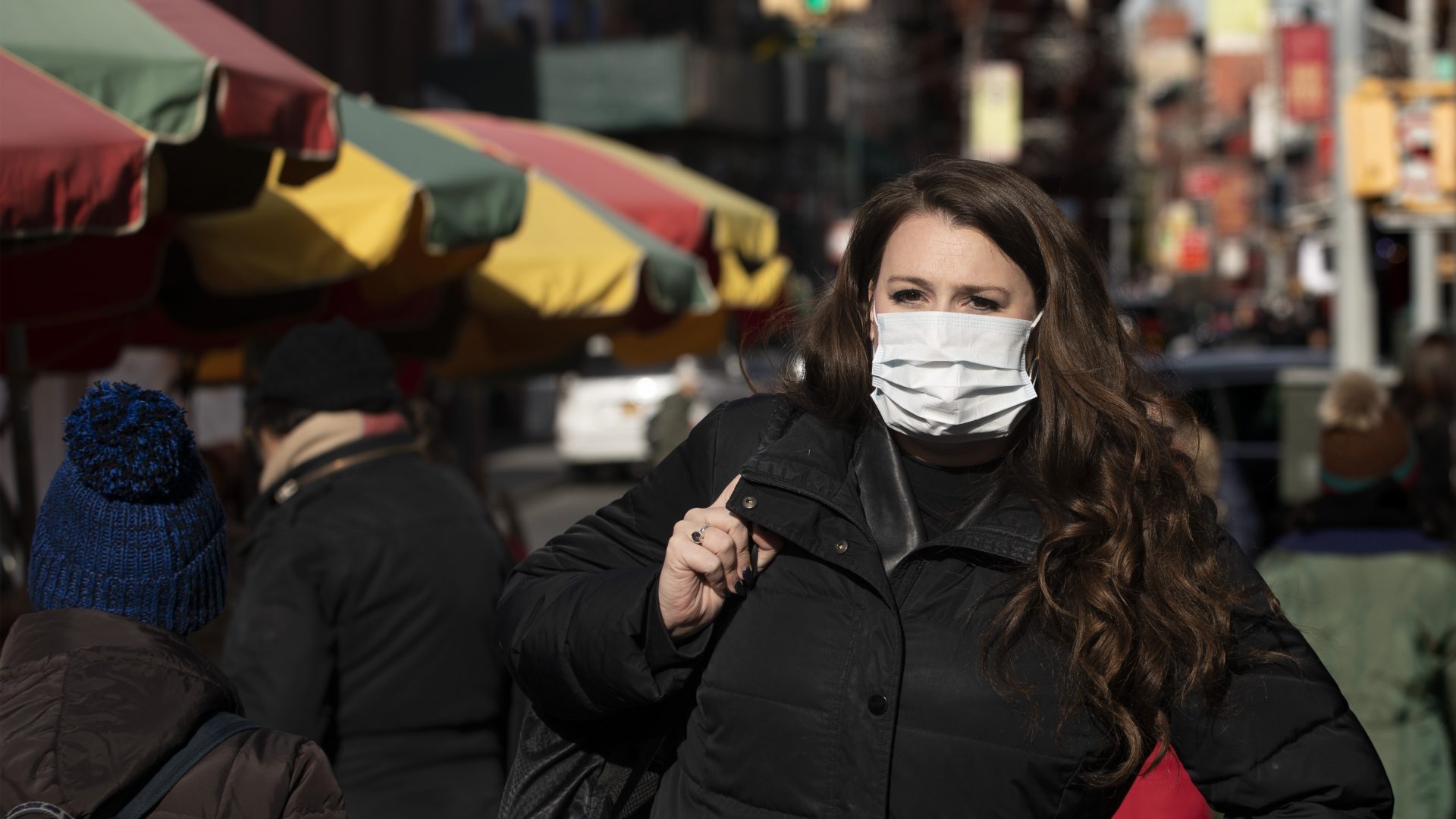 A woman, who declined to give her name, wears a mask in New York out of concern for the newly emerged coronavirus.

Luckily, Philadelphia and other cities won’t be starting from scratch.

Philadelphia’s Department of Public Health said it’s already begun adapting its previously developed plan — basically a playbook for how the city will respond — using guidance from the CDC and the World Health Organization. It’s also been meeting with local stakeholders in city government, as well as health care and community leaders, to spread the word about the latest guidance and coordinate exigency plans.

Rubin outlined several further steps that Philadelphia should take to reduce its vulnerability.

“I think we need to have access to very highly accurate testing facilities,” he said. “We need to secure the appropriate number of testing kits. We also need to be able to know where…our protective gear would be.”

The city’s health department said that the CDC and the Food and Drug Administration are in charge of developing and distributing those test kits, but that Philadelphia is not currently being considered to receive any. Instead, samples will be sent directly to the CDC for testing.

The Philadelphia Pandemic Preparedness Project also identified communication as an important factor in controlling the spread of infectious diseases.

“All cities that we’ve talked to are very concerned about the accuracy and the timeliness and the veracity of the information that’s out there,” Rubin said. “There’s all sorts of crazy things out there on the web — that this was a deliberate release of an infectious agent, that the vaccine will be ready in a very short period of time. So that kind of information could be very, very dangerous.”

Conversely, Rubin said, it’s important that people have access to information that could help control the coronavirus’ spread.

“Like washing your hands, covering your mouth with your sleeve when you cough, social distancing,” he said. “That kind of information is absolutely critical to disseminate.”

Preparing on an individual level

“We hear a lot of extreme things, like doomsday preppers, but that’s not really necessary,” he said. “You just need to take some very common sense and simple steps of having things ready, in place, and thinking through the ‘what if’ scenarios.”

For example, Najera said people should prepare for the possibility that schools and workplaces will close, which means lining up options for telecommuting and child care.

He also recommended brushing up on first aid and identifying alternative modes of transportation.

And then there’s the basic stuff — like washing your hands, keeping a distance of at least six feet from anyone who’s sick, and wiping down potentially contaminated surfaces with bleach solutions.

As for keeping abreast of the latest developments, Rubin recommends two resources: the CDC website, and that of the Philadelphia Department of Public Health, which says it’s planning to launch a website centered on COVID-19 soon.