Lance Walker with a customer at his barbershop in Chambersburg, Pa.

A barber breaking the bubble in Franklin County: Trump voter with ‘buyer’s remorse’ seeks conversations of ‘grace and mercy’

“I take responsibility for creating an atmosphere and being intentional about having conversations, hard conversations." 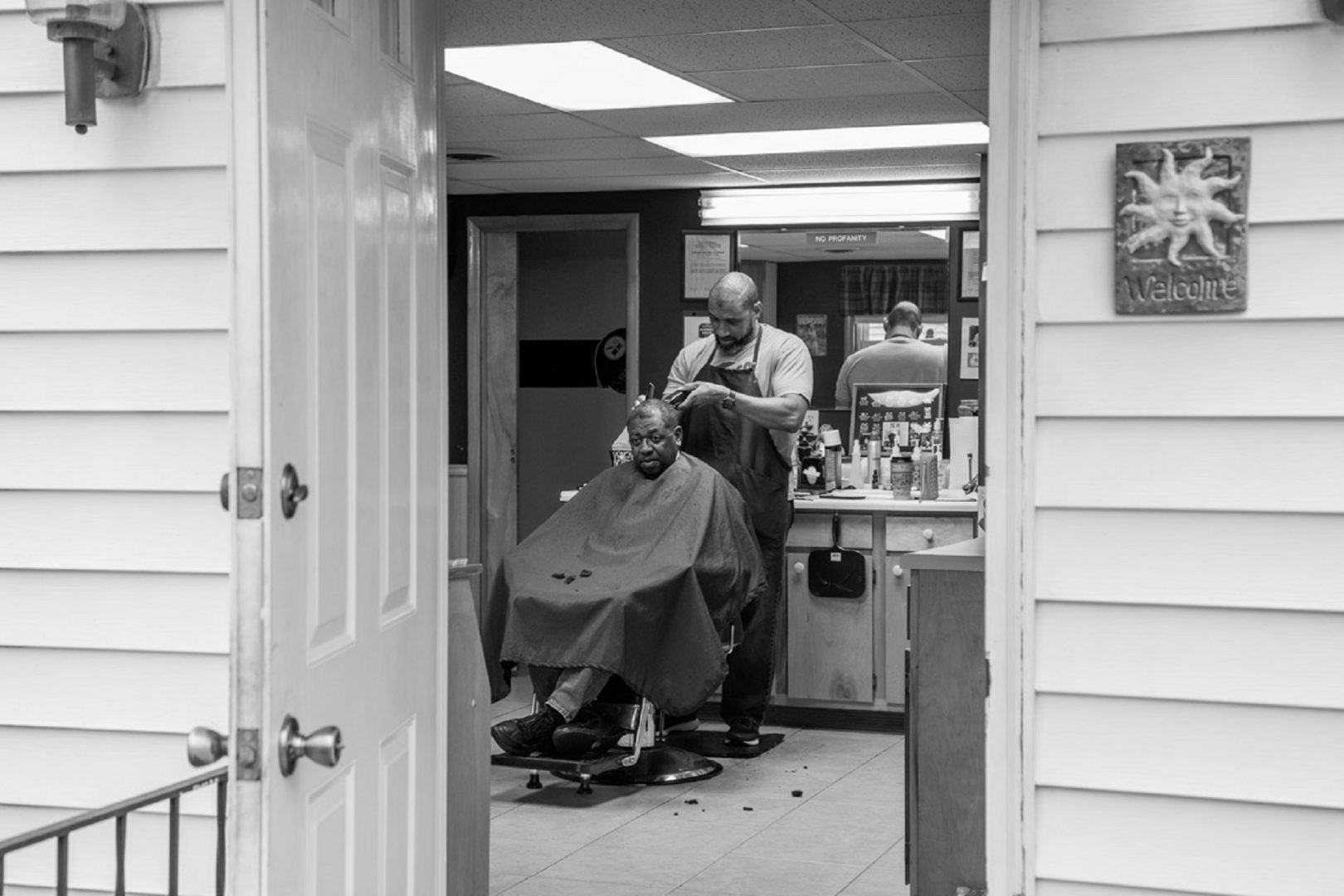 Lance Walker with a customer at his barbershop in Chambersburg, Pa.

(Chambersburg) — At Lance Walker’s barbershop in Chambersburg, America’s red, blue and other come together under the clippers. 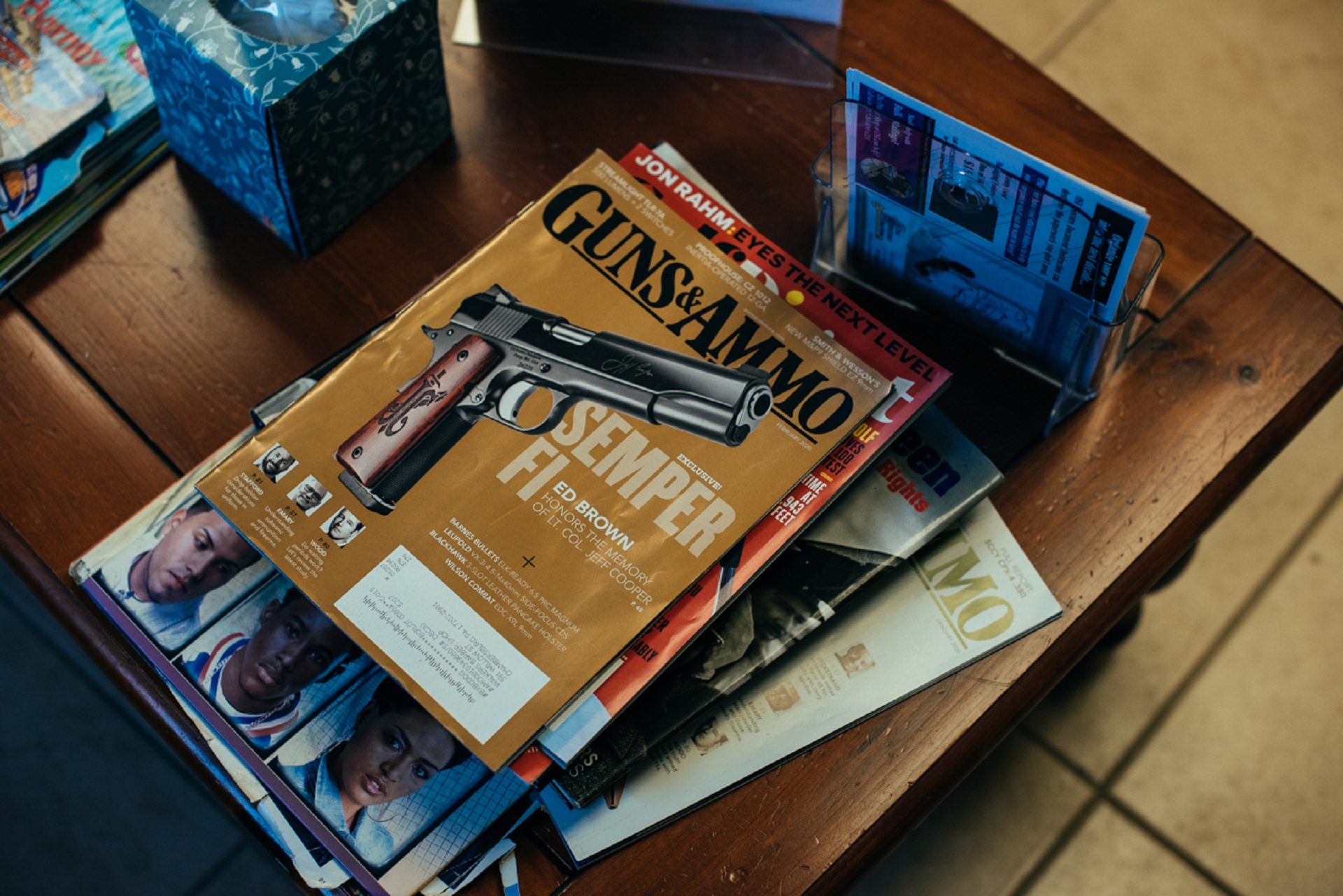 A Guns & Ammo magazine sits on the coffee table at Walker’s Barber Shop, not far from a copy of The New Jim Crow.

With homey plaid curtains and a sign that says “No Profanity,” the shop is a place where people with different politics and backgrounds mix. A Guns & Ammo magazine sits on the coffee table, not far from a copy of The New Jim Crow: Mass Incarceration in the Age of Colorblindness by the coffee maker.

On a recent afternoon, in this corner of south central Pennsylvania, more than half of the people in the shop came just to listen.

“I take responsibility for creating an atmosphere and being intentional about having conversations, hard conversations,” Walker said. “You see the divide that’s going in the country right now. So, if we don’t start talking and dialoguing and communicating, that’s huge.” Walker’s theory is rooted in an epiphany he had in 2016.

He’d been a Republican all his life and gotten swept up in the partisan frenzy that election year, often repeating the harsh rhetoric used by then-presidential candidate Donald Trump toward Hillary Clinton and other political opponents.

With Trump, he understood where the appeal came from for many voters. He saw a desire to upend the status quo and call out government institutions that can feel disconnected from people’s lives.

“Left and right, we’re sick and tired of it,” he said. “So when a guy comes along and says, ‘You make me sick, I can’t stand it,’ there’s a feeling of ‘Oh, you’re finally putting establishment in their place.’”

But something about Trump’s approach began to feel off-putting.

Walker was raised in a devout Christian household, taught to treat everyone with grace and mercy. As a voter, he’s been most motivated by his opposition to abortion and in previous years had supported George W. Bush and John McCain.

Trump caused him to search his soul.

One night during dinner, Walker realized he had lost his way — that he couldn’t revel in “us versus them” hostility and also live the Christian values he holds dear.

Since that moment, Walker has shifted his focus on national politics to things closer to home, joining local boards and avoiding easy answers and allegiances in his day-to-day life in order to connect, not divide. Lance Walker with a customer at his shop in Chambersburg.

Political dialogue in this polarized age can feel futile. Republicans and Democrats share less common ground now on key issues than they have in 20 years, according to surveys conducted by the Pew Research Center. At the same time, people’s beliefs have become more uniform; Americans are more likely to identify will all of the positions their party holds, rather than pick and choose. Close family members report drifting apart and receding into their respective media bubbles. 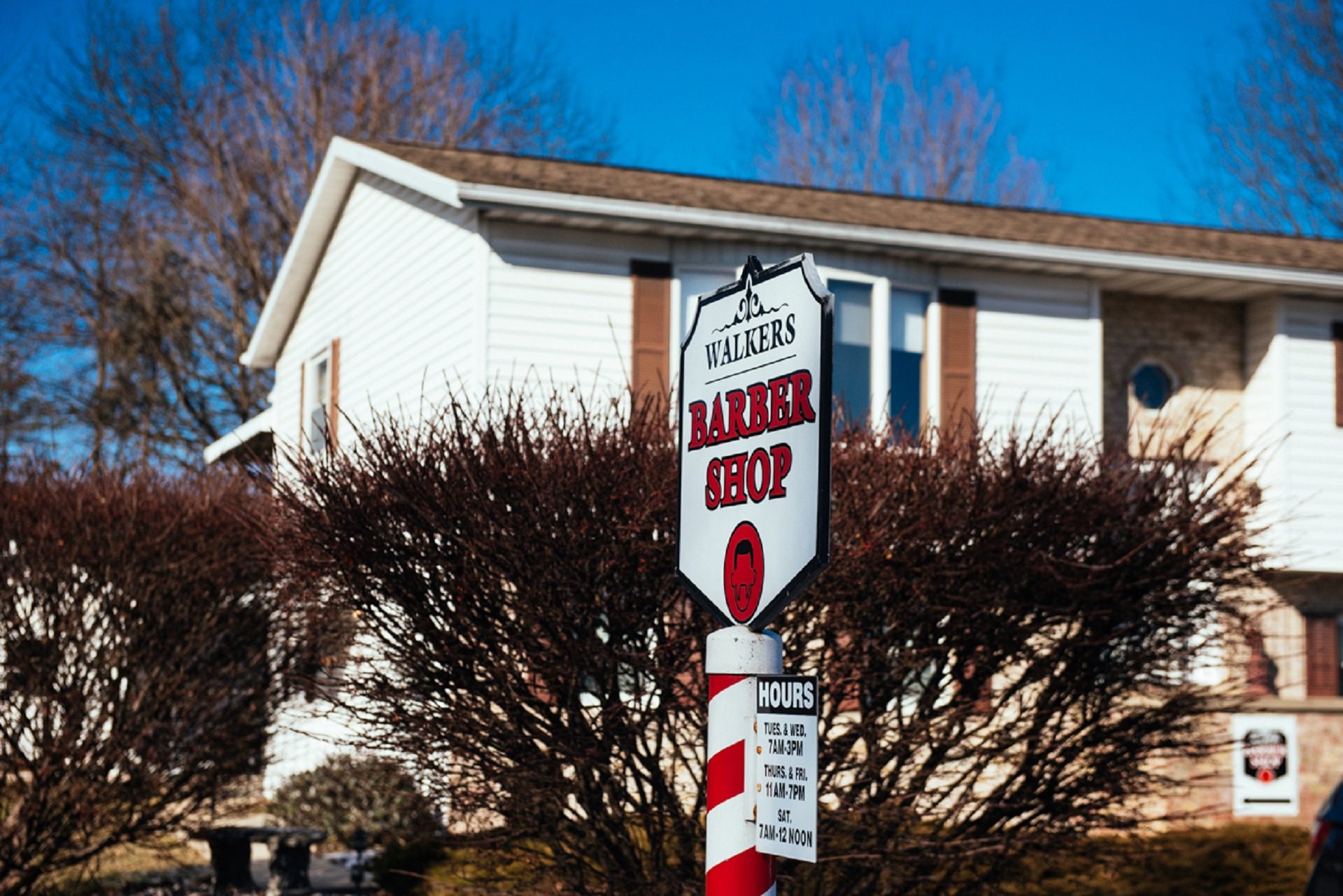 The exterior of Walker’s Barber Shop in Chambersburg, Pa.

Walker, 53, who has run the barbershop out of his home for about 14 years, makes a point of pulling people out of their online echo chambers to talk about difficult subjects. Here, online memes deserve to be discussed in real life, and incendiary topics, unpacked.

On a given day, the audience may include anyone from a professor at Penn State Mont Alto to a financial advisor from Merrill Lynch to Rich Carbaugh, a local electrician.

Carbaugh, a camo hat-wearing Republican, arrived for his haircut at 11 a.m.

At 1:25 p.m., he was still standing in the shop, drawn into conversation with another regular, Bill Harris.

Harris, who’s bald, is a fixture here even though he doesn’t need a trim anymore, preferring instead to sit back and stir up conversation.

“When somebody goes Christian, I go Muslim automatically,” Harris said. “When there’s a lot of Muslims in here, I go Christian.”

Across the room, Carbaugh shook his head and laughed. He had been ready to leave, but said he and Bill had been getting into it.

“I’m conservative, and he’s not,” Carbaugh said. “But we get into some good conversations. We agree to disagree on most things and still walk out of here as friends.” 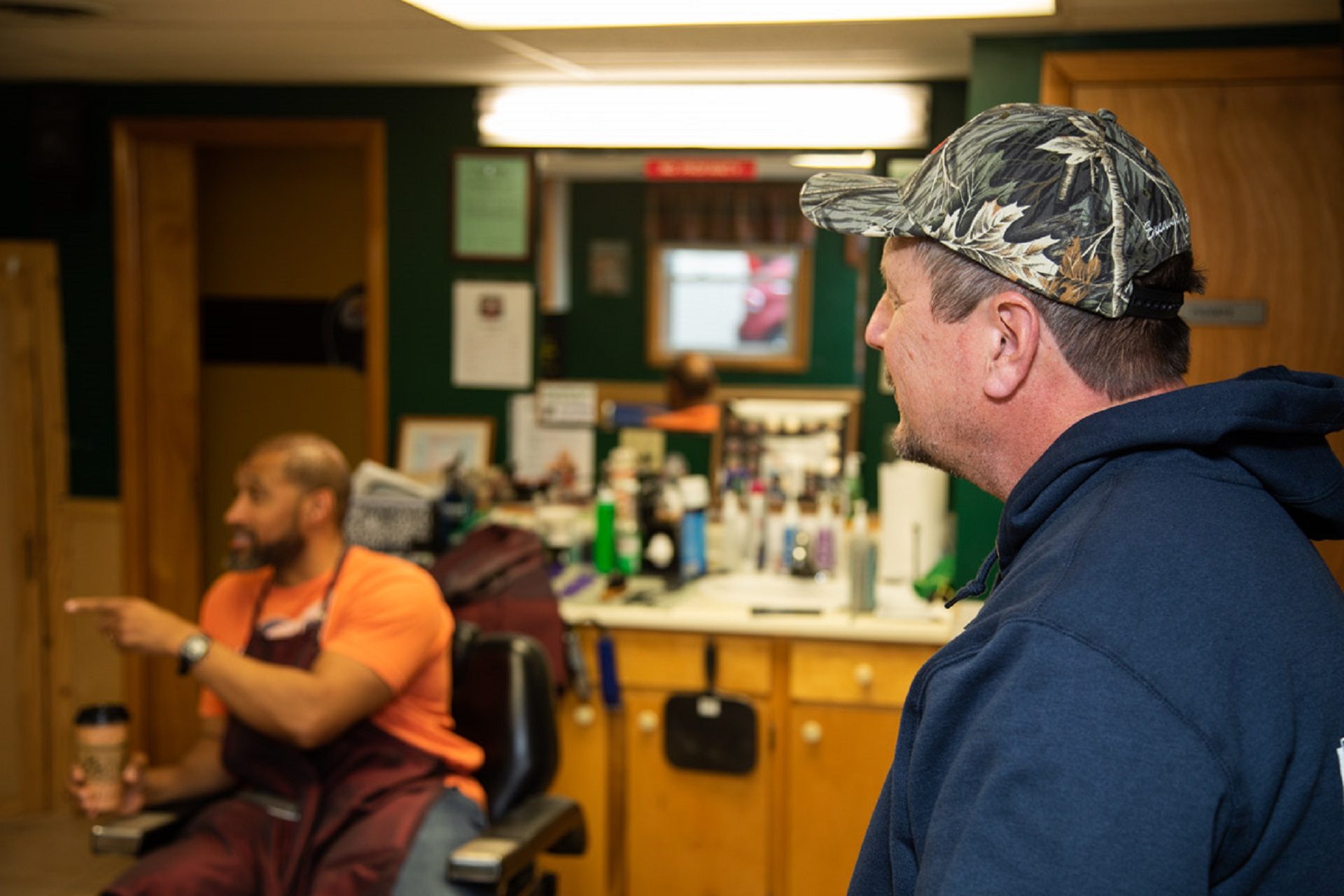 Rich Carbaugh, a Trump-supporting electrician, lingers long after his haircut at Walker’s Barber Shop is over. 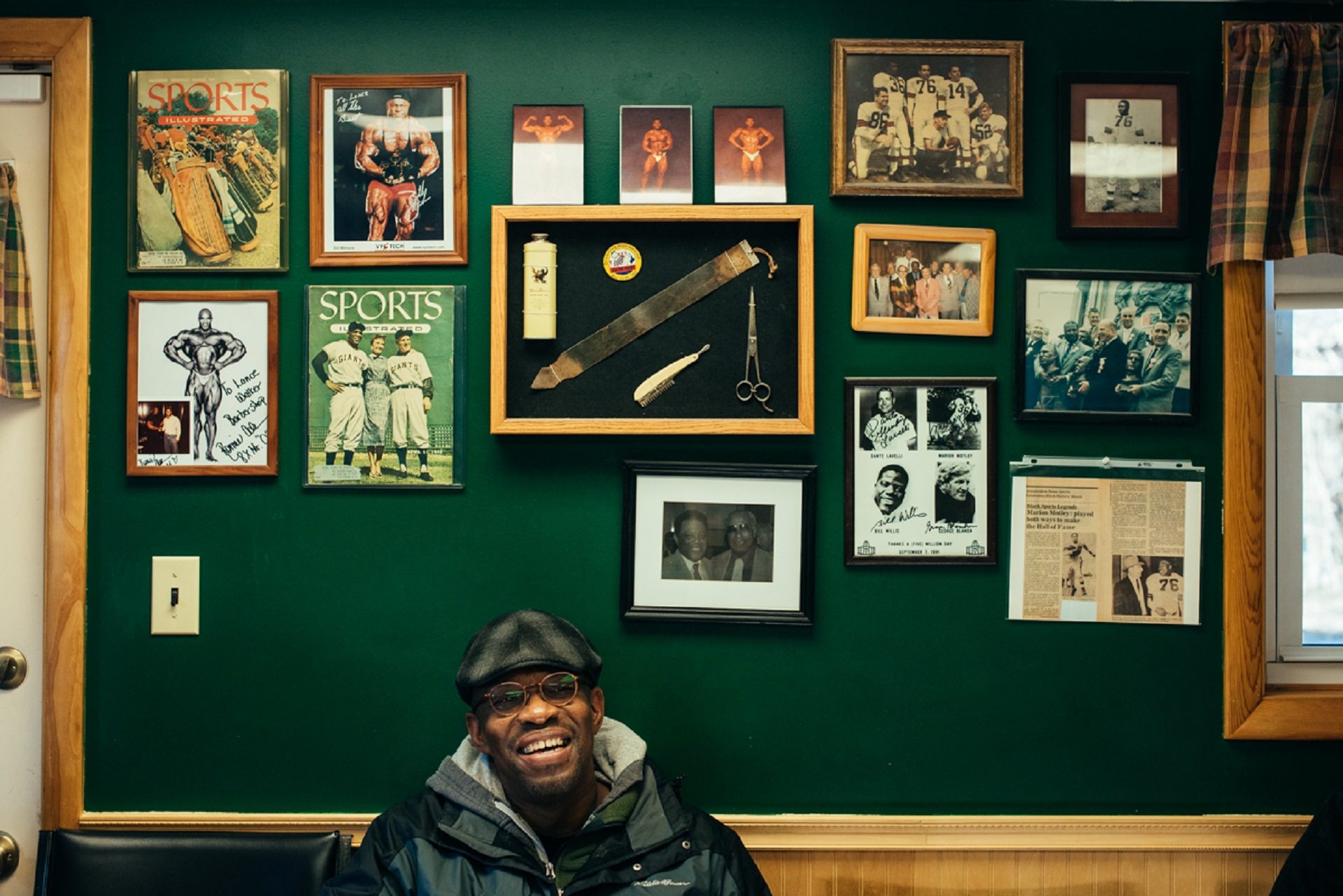 Bill Harris doesn’t need a haircut anymore, but he still frequents the barbershop for the conversation. He’s a big liberal who loves to play devil’s advocate.

That friendship allows them to touch on topics that would otherwise be too difficult to hash out, or too likely to result in a misunderstanding. Carbaugh, who is white, had been asking Walker and Harris, both Black, about a certain racial slur.

“The n-word. I know it’s wrong on my end, but why can you all talk about it and it be alright?’” he said, gesturing toward Walker and Harris. “I‘ve known Lance a long time and he can call me out on anything racial.”

Their conversation wrapped, Walker thanked him for the discussion. Chambersburg, the seat of Franklin County, is in a conservative, Christian area where 71% of voters went for Trump in 2016.

But this corner of so-called “Red America” is also home to people sometimes left out of that description. The area is 16.6% Latinx, with a growing immigrant population pulling in residents from Central America, Haiti and Korea, often via other parts of the U.S.; Chambersburg borough is 12% Black.

Walker himself is a transplant. He grew up in public housing outside of Pittsburgh, and moved to central Pennsylvania after stints as an Army tanker and personal trainer. His wife is from the Chambersburg area, and the one-time competitive body builder has raised his three kids here.

It hasn’t always been easy.

“In this area, as a Black man there’s a certain way I have to hold myself, or I really feel like it’s going to be held against me,” Walker said.

When he goes to the gym, he wonders did another patron move his bag to make space for him, or because he was suspicious of Walker? When a clerk follows his son around in a store, will he face backlash for complaining to management?

But Walker’s poured himself into tough conversations more, not less, since that moment in 2016. Stephen Fugate, 16, gets a trim at Walker’s Barber Shop in Chambersburg.

Ultimately, that year, he voted for Trump, but now says he has “buyer’s remorse.”

Big picture, he said he doesn’t feel at home in either political party now. His favored Democratic candidate, Andrew Yang, recently dropped out of the race. He isn’t compelled by anyone else remaining.

As 16-year-old Stephen Fugate got a trim, the conversation moved from whether men should have a say in abortion, to the meaning of “community.”

“If you have more people… who care for each other, that’s a community,” Fugate said.

“When news comes on at home, I don’t want my daughter to hear what Trump did, so I change the channel,” he said. “This is the only place you’ll hear me talk about anything political.”

For Bill Harris, the bald regular, as much as he likes to stir the pot, he’s gotten into a lot out of challenging conversations here.

“As you develop those relationships, you find that, well, maybe I can moderate on a few things. That I’m not always right,” he said. 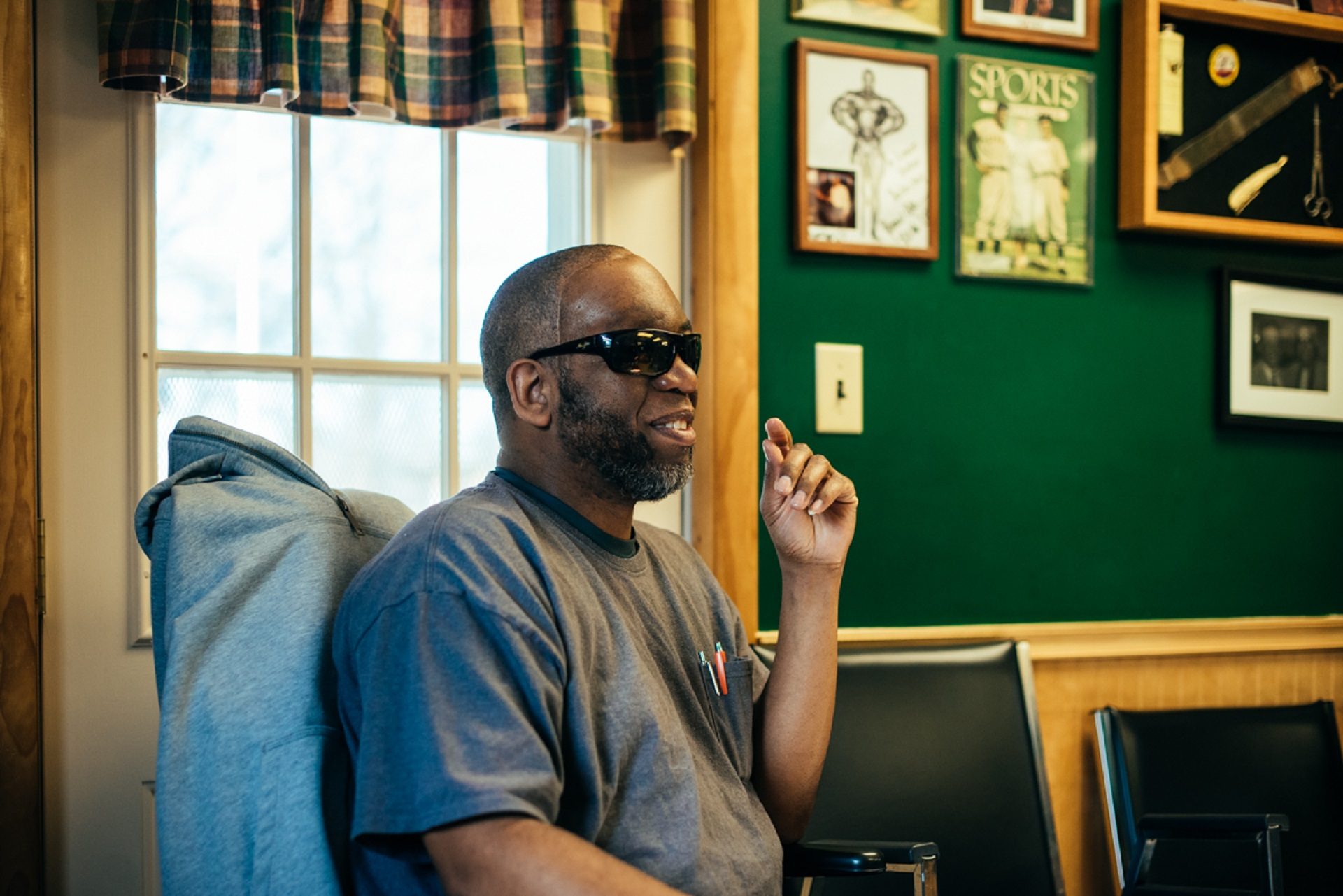 Lemar Best doesn’t talk politics often, but when he does, it’s at Walker’s. 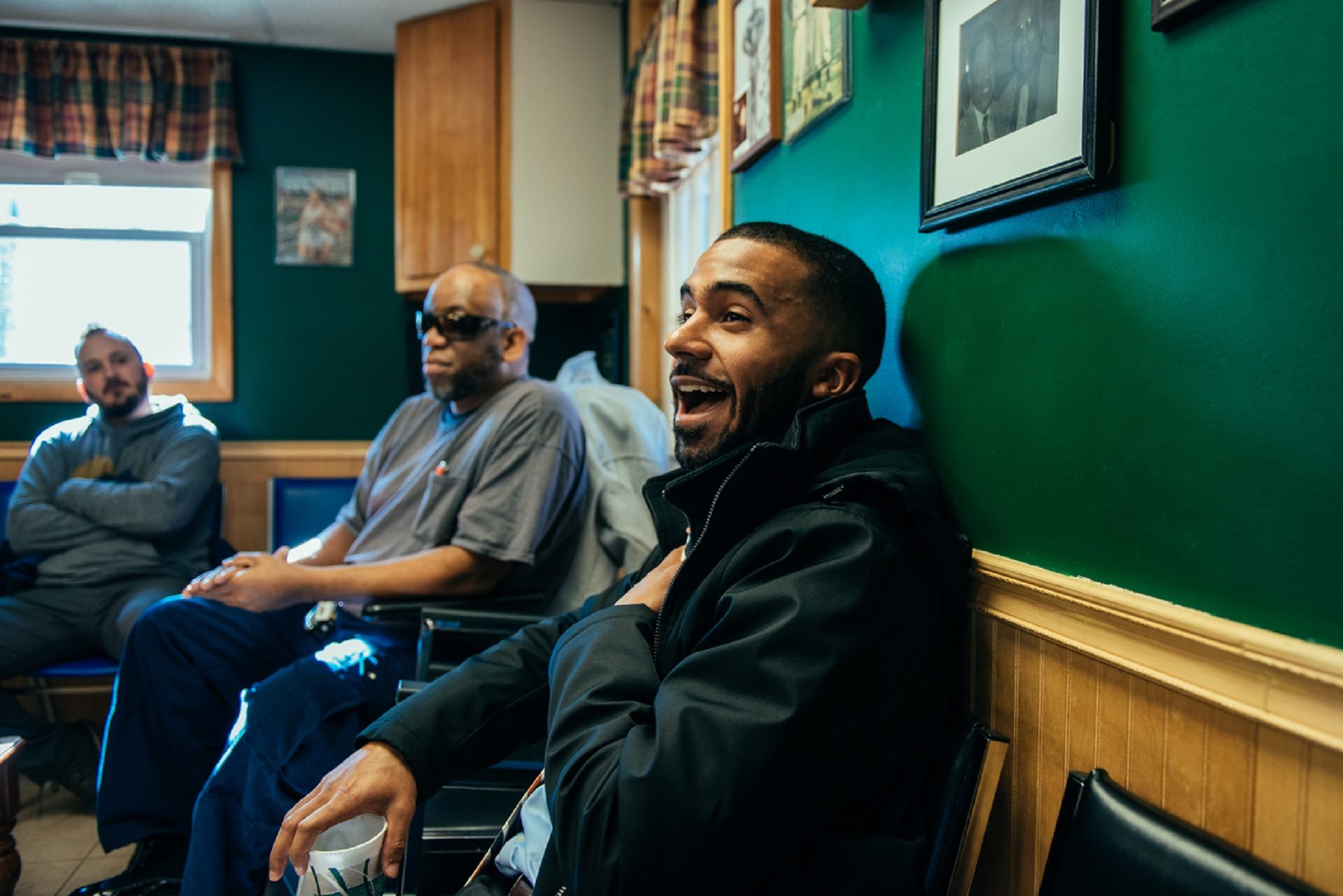 Jacob Bickley, a financial advisor at Merrill Lynch, stopped by on his lunch break to check out the conversation at Walker’s Barber Shop. 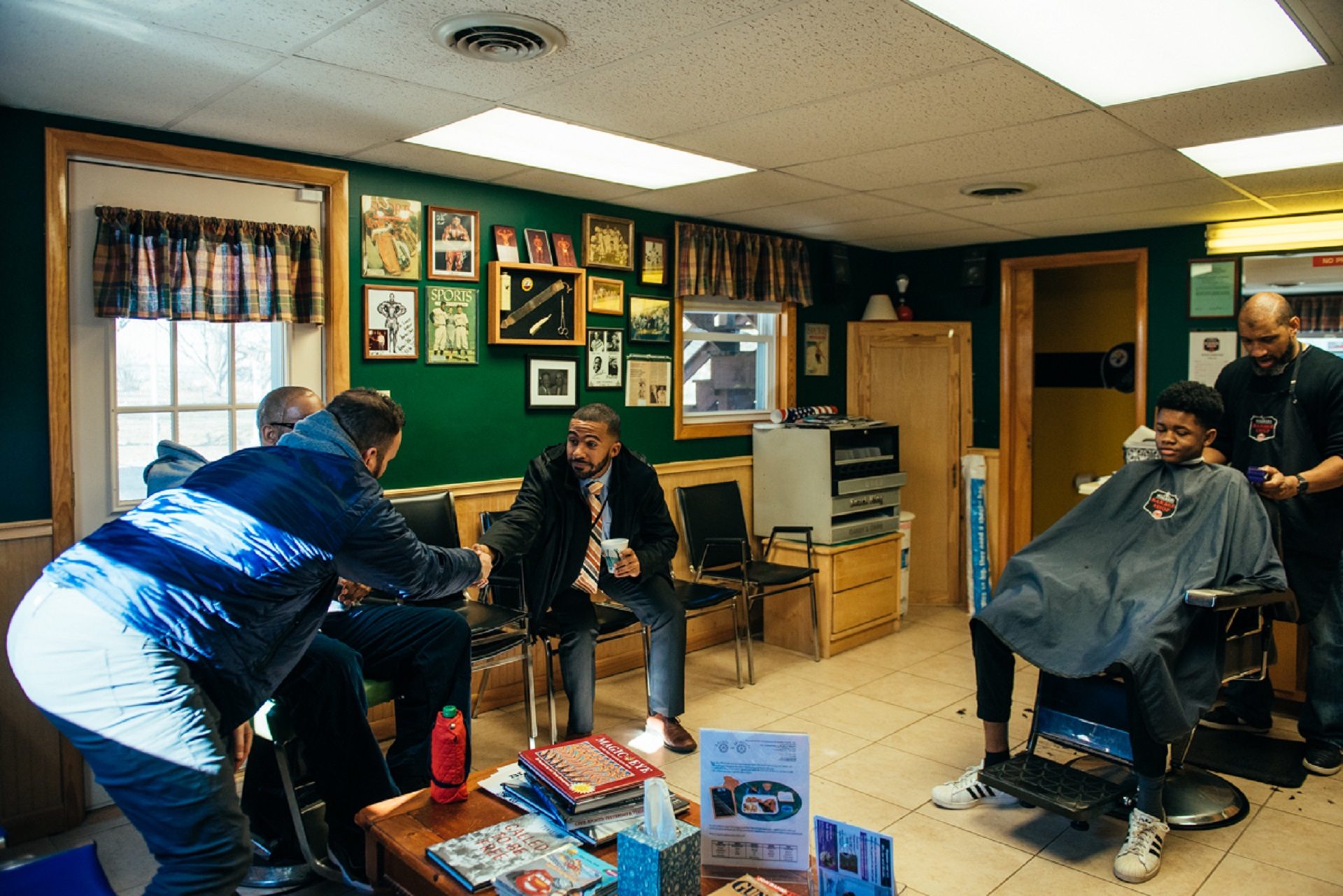 A handshake between Walker’s customers, and those who dropped by just to listen to the conversation. 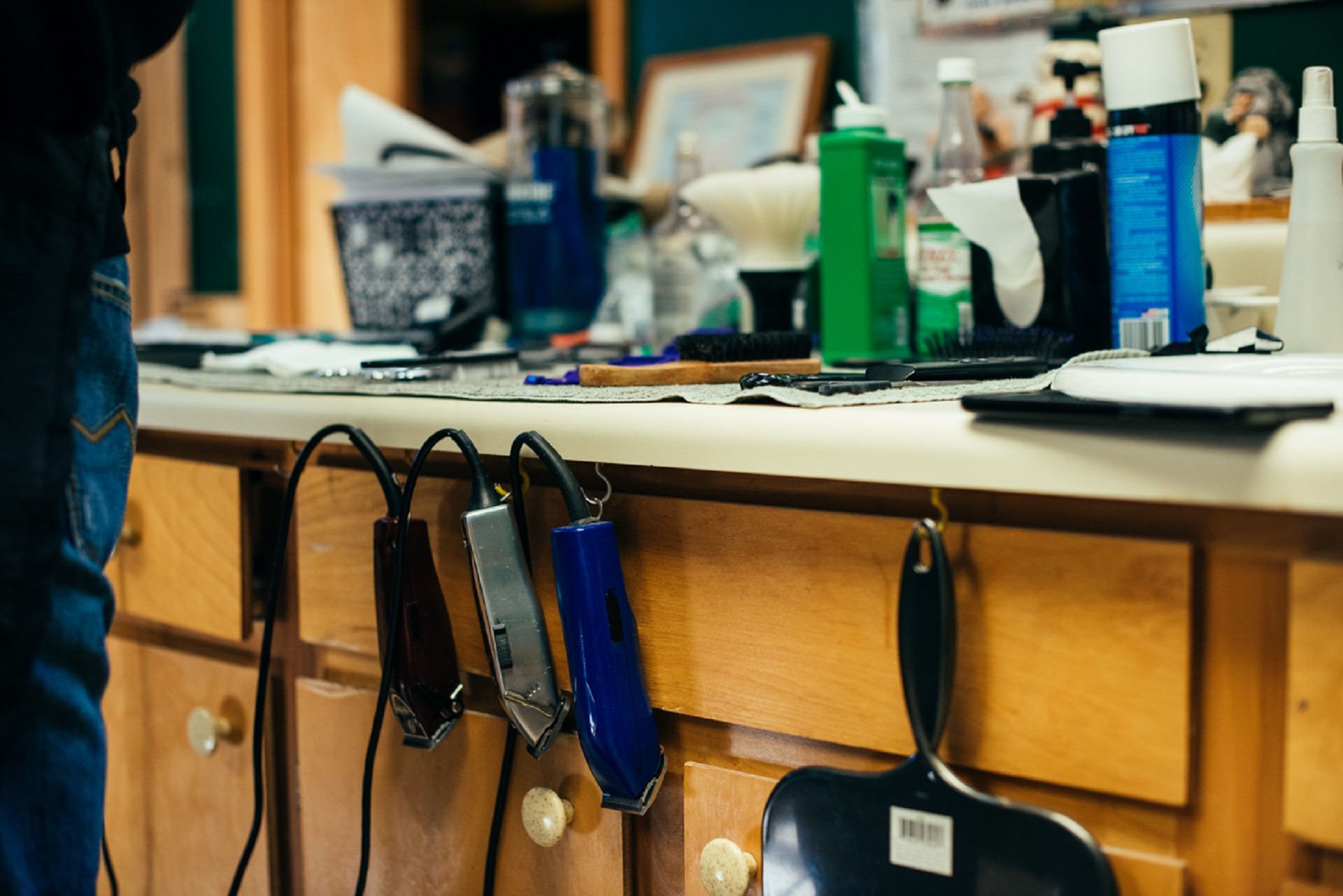 Clippers at Walker’s Barber Shop hang at the ready.

As customers filtered in and out, Walker steered the discussion from mass incarceration, to military spending, to the treatment of Confederate civil war monuments.

“Germany had the good sense to take the swastikas down,” he said, then paused to check in with the client in his chair, Anthony Taylor. “We doing the usual?”

Walker nodded, and then launched back into conversation, all without missing a hair.