Patti Murphy rattled a fence and called to the big, dark brown mares.

“Come on, girls,” she yelled across a field on this 94-year-old Adams County farm.

Overnight, mares gave birth to four foals.  Murphy helped deliver one of them. After 20 years working on this farm and eight years living on it, that’s still her favorite part of the job.

“It’s a miracle, really. It’s pretty awesome to witness,” she said. “Usually within an hour to two hours, they’re up and nursing and ready to — ready to take on the world.”

Lately, Murphy said she’s been worrying about this job coming to an end.

That’s because Democratic Gov. Tom Wolf wants to take about $200 million away from the horse racing industry and divert it to pay for scholarships at the 14 state-owned universities.

In making his pitch earlier this month, Wolf argued that most of the horse owners live out of state and that the Pennsylvania horse racing can survive without the state giving money to boost “purses” — the prize money that owners receive when their horses win races.

But workers in Pennsylvania’s horse industry say those purses are the lifeblood of the business, and that Wolf’s proposal, if enacted, would put about 20,000 jobs at risk, including Murphy’s. 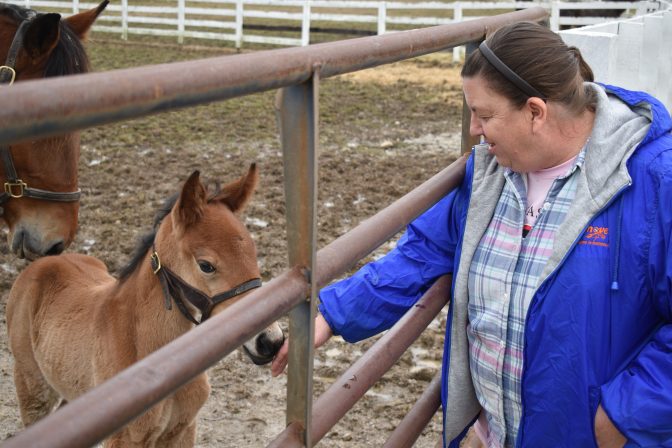 Murphy started working with standardbred horses when she was 14. Now 55, she figures she’s about 10 years away from retiring.

“I’ve done this all my life,” Murphy said. “…I would have to find a new career path.”

The debate over Wolf’s proposal pits race horse owners, breeders and farmers against parents and college students in a state that has both a deep farm culture and one of the highest student debt burdens in the country.

Wolf is bracing for a battle.

“You can bet there are people who have been benefiting from that pool of money … (who) are going to be fighting back,” Wolf told students during a stop at Lock Haven University earlier this month. “So we need to make sure that we’re arguing on our side.”

The debate goes back to 2003, when Ed Rendell became governor. The Democrat pushed to bring tens of thousands of slot machines into the state.

His main pitch was that taxing slot machines would lower property tax bills. But he told the legislature that the move also would protect horse racing, which, at the time, he described as a $1.2 billion industry in Pennsylvania.

Todd Mostoller, who represents horse owners and trainers as executive director of the Pennsylvania Horsemen’s Benevolent and Protective Association, said state lawmakers, casinos and the race horsing industry reached a compromise over how to share the gambling tax revenue.

“Without those three entities agreeing on a percentage distribution of revenues, we didn’t have the votes for passage,” Mostoller said.

The gambling expansion was enacted in 2004, and hundreds of millions of dollars have gone to the horse racing industry each year since.

Wolf’s scholarship idea isn’t the first time an elected official proposed using money earmarked for the racing industry for other things — particularly when legislators were trying to make up budget shortfalls and avoid tax increases.

“It’s amazing to me the political power that [horse farms and the racing community] wield in the Capitol,” Senate Majority Leader Jake Corman (R-Centre) said during a panel discussion in 2017. “Any time we even bring it up, it gets shot down in about half a second, and we fall way short on votes to do that.”

The Commonwealth Foundation, a conservative group in Harrisburg, frequently advocates for eliminating the horse race fund.

“Picking certain businesses to subsidize is not the way to actually grow the economy,” said Nathan Benefield, vice president and chief operating officer for the foundation. “It’s not the most effective way to create jobs and incentivize growth and makes states more attractive.”

Benefield opposes many parts of the overall spending plan Wolf proposed for 2020-21. He thinks it spends too much and requires too much borrowing. It cuts charter school funding and doesn’t expand private school tax credits — two of the Commonwealth Foundation’s top priorities. But ending the horse racing subsidy, in Benefield’s view, is “one of the bright spots.”

Why Wolf wants to use the money for college scholarships 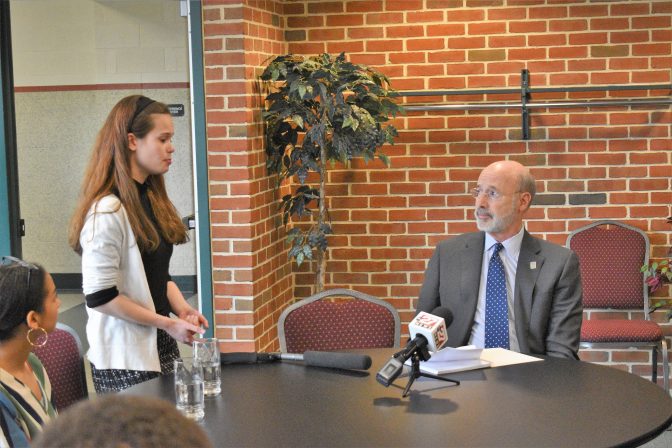 The average Pennsylvania student who borrowed money for school graduated in 2018 with more than $37,000 in student loan debt, according to the Institute for College Access & Success.

Only students in Connecticut ranked higher.

Meanwhile, the average cost to attend a four-year public or private school is higher in Pennsylvania than in most states, according to the National Center for Education Statistics. Wolf said the state should invest in kids — not horse racing.

“I think you’re much more worthy of that,” Wolf said during a roundtable discussion with students, parents and educators at Carlisle High School in Cumberland County.

In his budget address, Wolf said his proposal would allow 25,000 students to earn a degree without crushing debt. In budget documents, the administration students would be required to live in the state after graduation for the same number of years they received the scholarship or else the scholarship money they received would convert to a loan that they have to pay back.

The budget documents also say the scholarship would be “needs-based.” But at stops, Wolf said he’s still gathering feedback for who should be eligible for the program and how it would be structured.

At Carlisle High School, senior Samantha Martin told Wolf the program could have led her to choose a different school.

She applied to Indiana University of Pennsylvania, a public school that her father attended, and Gettysburg College. Both schools accepted her. Gettysburg had a higher sticker price, but Martin told Wolf that, after scholarships, Gettysburg would cost her only $5,000 more for the first year.

“The state universities are supposed to be the affordable ones,” Martin told Wolf. “The ones that any person in Pennsylvania can go to.”

Martin’s father is a public school teacher. Her mother, Jacquie Hultquist, does social service work. Hultquist said the family has cut back on non-essentials to save for college for their two high school children.

“We haven’t taken vacation in years saving for their college,” Hultquist said. “I don’t see us ever taking vacations if we have to pay $60,000 in debt.”

Why the horse race industry is raising the alarm 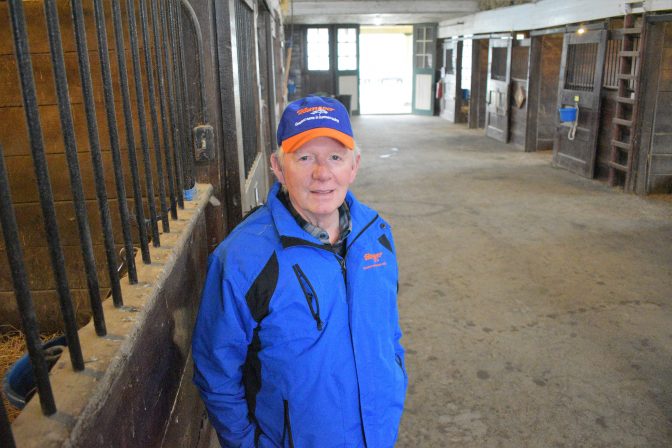 Jim Simpson, chairman of Hanover Shoe Farms, stands outside a stall on Feb. 11, 2020.

Hanover Shoe Farms covers about 3,000 acres in York and Adams counties. It has about 80 employees with about 40 families living on the farm. Depending on the time of year, it can have more than 1,000 horses.

Bridgette Jablonsky, who grew up on  Long Island, started working at Hanover in 1996 after graduating from the University of Pennsylvania’s School of Veterinary Medicine.

The farm’s headquarters sit on a road between two relatively small boroughs (Littlestown, population 4,499) and (Hanover, 15,660). But it has a prestigious national reputation.

“If you want to be a manager of a baseball team, you want to manage the Yankees, right?” said Jablonsky, now the farm’s executive vice president. “….And that’s what I want to do.”

The money from the state race horse development fund helps keep the farm alive, she said.

The race horse development trust fund is expected to have $238.4 million available in the 2020-21 fiscal year. If Wolf gets his way, the state would shift $204 million from the fund to the proposed college scholarship program. For the horse industry, that would mean cuts from the nearly $33 million that now supports breeder incentives and nearly $163 million for purses.

While the owners who receive that purse money might live out of state, Jablonsky said the money flows back into Pennsylvania to pay for breeders, trainers, blacksmiths, veterinarians and others who care for horses or provide food or services for horse farms.

Jablonsky said she hopes the governor reconsiders, noting that the farm made past decisions about upgrades and other spending based on the promise of the horse racing subsidies.

“I mean he has to realize, he’s not destroying a rich guy in New York,” she said. “He’s destroying families in PA where this is their livelihood.”

The chairman of Hanover Shoe Farms, Jim Simpson, said if the governor’s plan goes through, the farm will have to consider selling land to developers. The farm had a payroll of $3.2 million last year and paid about $4.1 million to Pennsylvania vendors, according to figures it provided.

One of the biggest expenses was more than $850,000 that went to a nearby hay supplier. 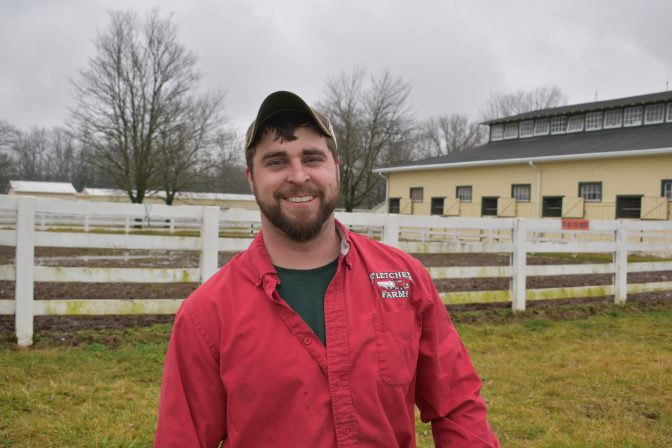 On a recent afternoon, a dozen workers unloaded 10 and a half tons of hay into barns. Each bale weighed about 55 pounds.

Kyle Arentz, 27, wore chaps to protect his pants as he used small scythes to grab and move the hay. His grandfather started the hay business, and Arentz said it’s hard to predict how much of an impact the governor’s proposal would have on his family’s business. But, unsurprisingly, he’s not a fan of it.

“We have enough handouts in this country,” Arentz said. “We don’t need to take our hard-earned tax dollars … to give people more handouts, because the money comes from somewhere. It’s not just free money. That’s what a lot of people don’t understand.”

Of course, some people see the slot machine money that trickles down to this hay supplier as a hand out to the racing industry. But not Arentz.

For one, back in 2003 Gov. Rendell promised that slot-machine revenues would be used to provide some property tax relief. Arentz doesn’t think that relief lived up to expectations — something independent reports back up. In 2014, a five-year review by The Associated Press found that $187 was knocked off the average homeowner’s bill, but because of increases in school property taxes, the vast majority of homeowners were paying more.

And, besides, the money Arentz earns unloading bales doesn’t feel like a handout.

“We go out and put our hearts into it and work our tails off every day,” Arentz said. 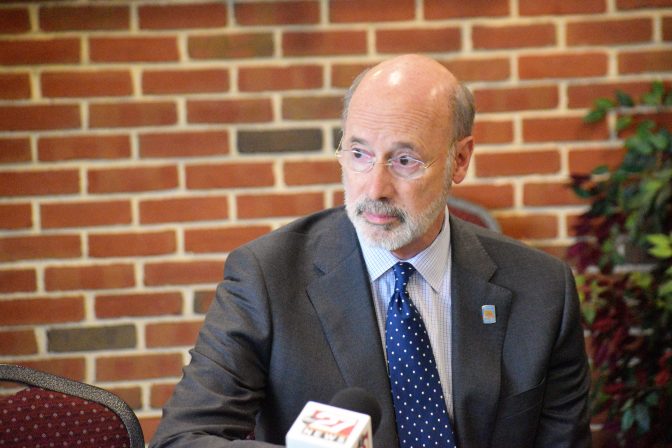 Gov. Tom Wolf listens during a discussion at Carlisle High School on Feb. 5, 2020. 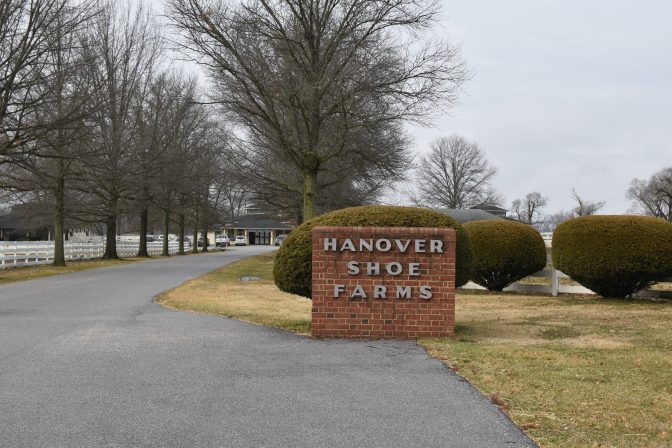 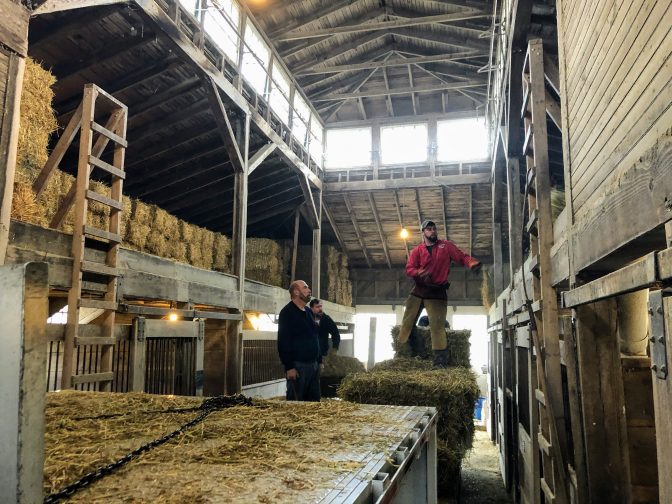 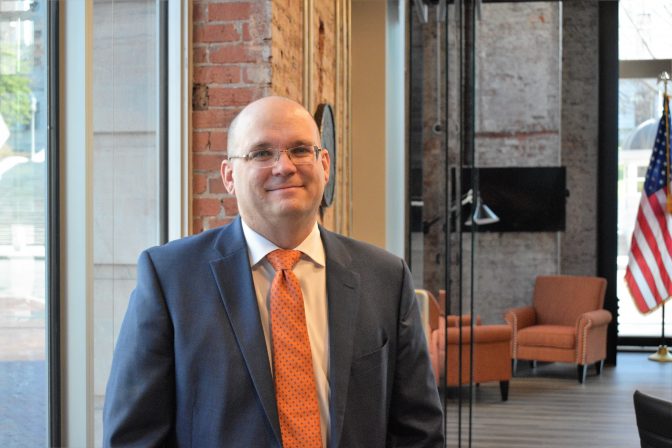 Nathan Benefield is vice president and chief operating officer of the Commonwealth Foundation.