Houston Astros owner Jim Crane, right, and manager Dusty Baker listen to a question during a news conference before the start of the first official spring training baseball practice for the team Thursday, Feb. 13, 2020, in West Palm Beach, Fla.

Houston Astros apologize for sign-stealing, but provide fuel for critics

The apology appeared to be an attempt to turn the page for the embattled team.

(West Palm Beach, Fla.) — Houston Astros players and coaches offered an apology Thursday in the wake of a sign-stealing scandal that sent shock waves throughout Major League Baseball. But the apology seemed to further inflame critics of the league’s and team’s response to the sweeping cheating scheme during the 2017 and 2018 seasons.

“The only thing we can do is sit here and say we’re sorry, we’re going to move forward in a positive way,” owner Jim Crane said during a news conference at the team’s spring training facility in Florida.

Two players, Alex Bregman and José Altuve, offered brief words of regret. “We especially feel remorse for the impact on our fans and the game of baseball, and our team is determined to move forward, to play with intensity and to bring back a championship to Houston,” Altuve said.

The apology appeared to be an attempt to turn the page for the embattled team amid widespread criticism that the punishment meted out by the league was too light given the scale and longevity of the scheme.

The league and the team have declined to punish any players over the scheme, which was described in the commissioner’s report as “player-driven.” Crane said team leadership could have stopped the cheating but failed to do so. 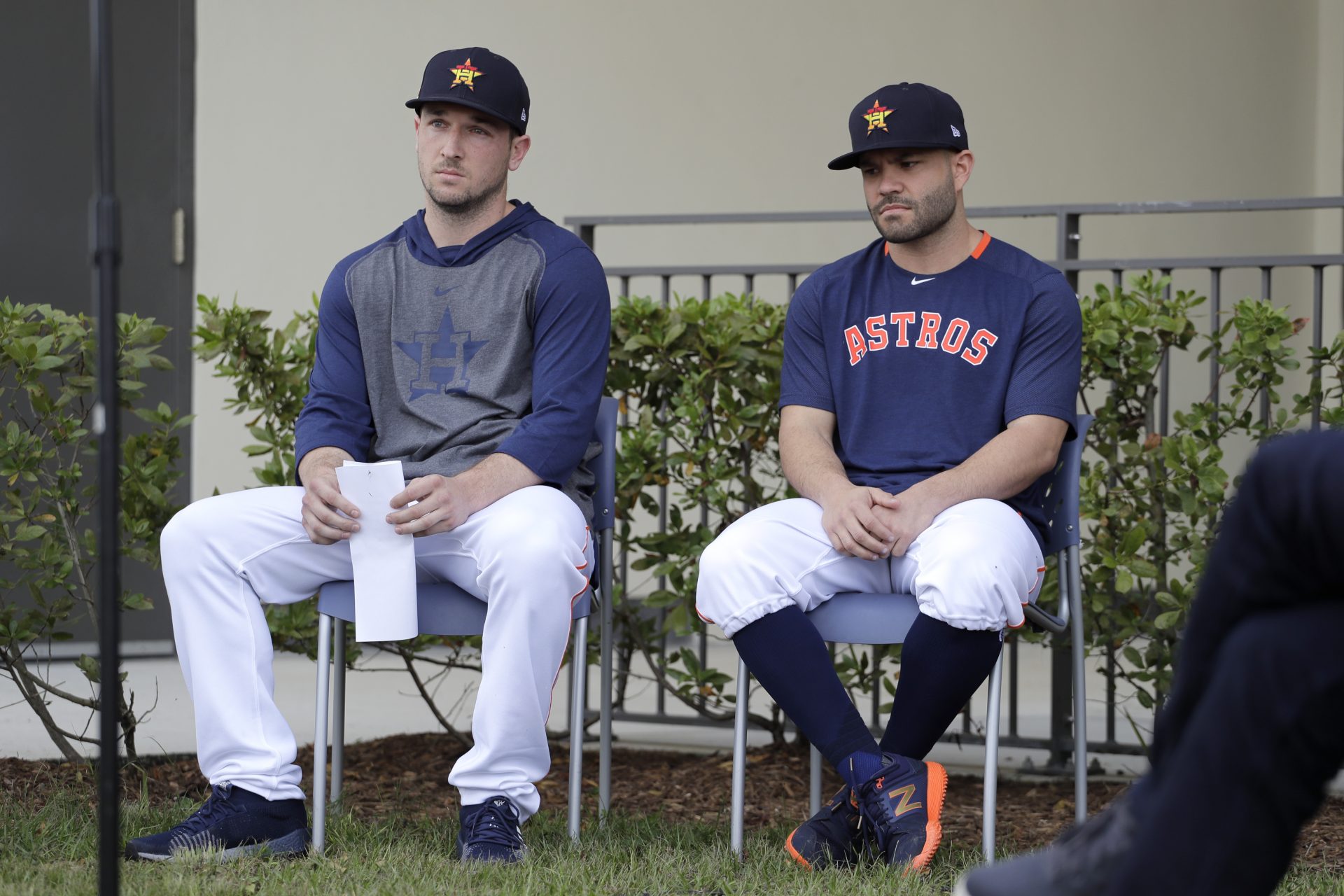 Houston Astros infielder Alex Bregman, left, and teammate Jose Altuve sit in chairs as the wait to deliver statements during a news conference before the start of the first official spring training baseball practice for the team Thursday, Feb. 13, 2020, in West Palm Beach, Fla.

The commissioner also has not sought to strip the team of its 2017 World Series win over the Los Angeles Dodgers. “Listen, the commissioner made it clear that we weren’t going to go backwards, the championship would stay intact, and I agree with him,” Crane said.

But he was met with some skepticism when he said the scheme “didn’t impact the game.”

When pressed later in the news conference about whether he thought the sign-stealing, which told batters which pitch was about to be thrown, offered an advantage, Crane said: “It could possibly do that; it could possibly not.” 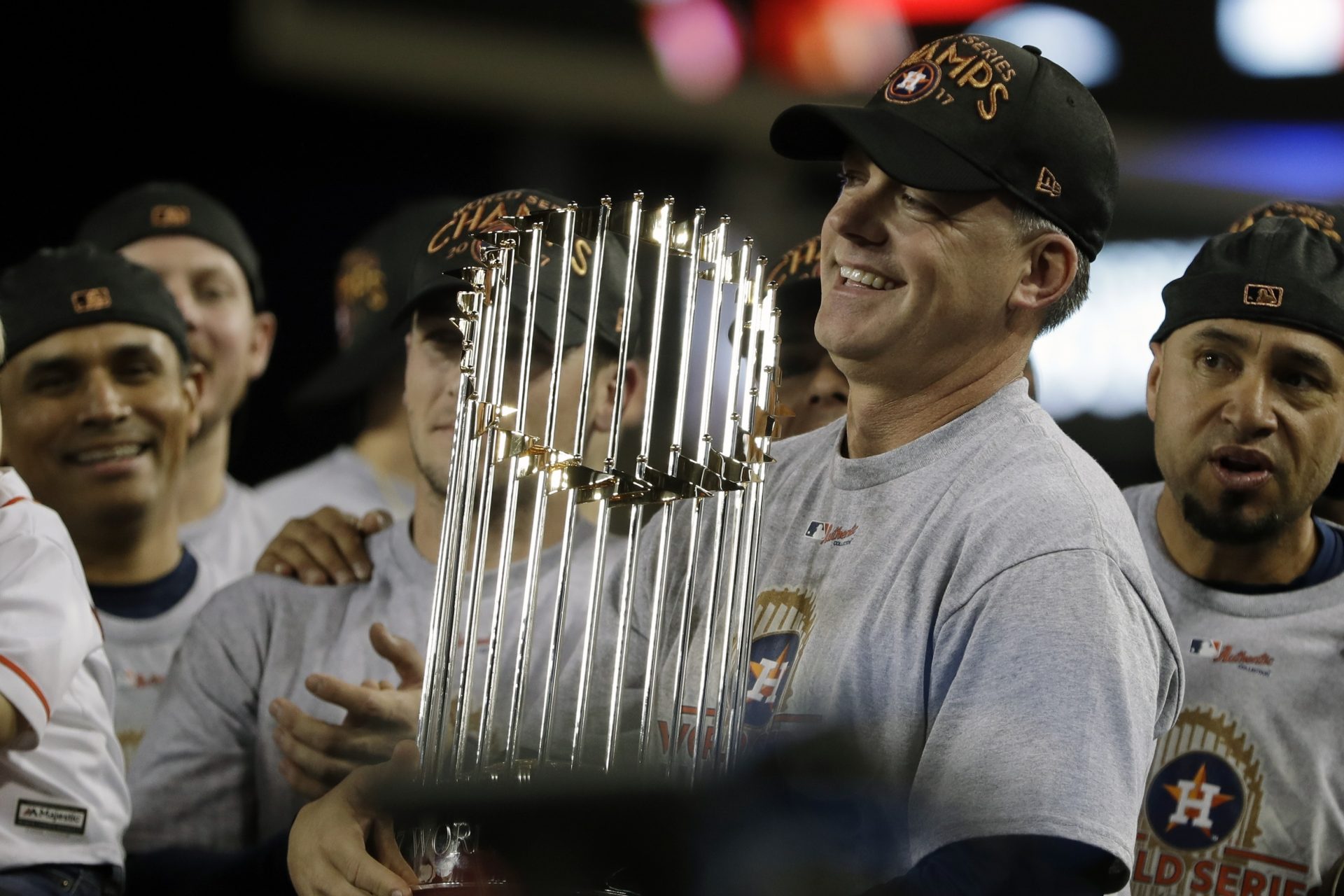 FILE PHOTO: In this Nov. 1, 2017, file photo, Houston Astros manager A.J. Hinch holds the championship trophy after Game 7 of baseball’s World Series against the Los Angeles Dodgers, in Los Angeles. Houston manager AJ Hinch and general manager Jeff Luhnow were suspended for the entire season Monday, Jan. 13, 2020, and the team was fined $5 million for sign-stealing by the team in 2017 and 2018 season. Commissioner Rob Manfred announced the discipline and strongly hinted that current Boston manager Alex Cora — the Astros bench coach in 2017 — will face punishment later. Manfred said Cora developed the sign-stealing system used by the Astros.

The team used several methods to steal signs, including using a center-field camera to decode signs from the opposing team about what pitches were coming. In the 2017 season, the team would then bang on a dugout trash can in code to alert the batter about the pitch.

Commentators such as Sports Illustrated’s Jimmy Traina were not impressed by the apology: “Crane insulted everyone by saying his team cheated but it didn’t help and Altuve and Bregman read prepared statements like robots for about 30 seconds.” ESPN’s Joon Lee said, “Today made everything significantly worse for Houston, and added even more fuel to the fire.”

Spring training marks the first time the team has gathered since the scandal became public. The Astros had a meeting on Wednesday night to discuss the issue. Outfielder George Springer said that “the amount of remorse and regret was very, very obvious to us in this room.”

“I feel horrible for our sport, our game, you know, our fans, our city, our organization — just fans in general,” Springer said, as NPR’s Tom Goldman reported. “I regret everything.”