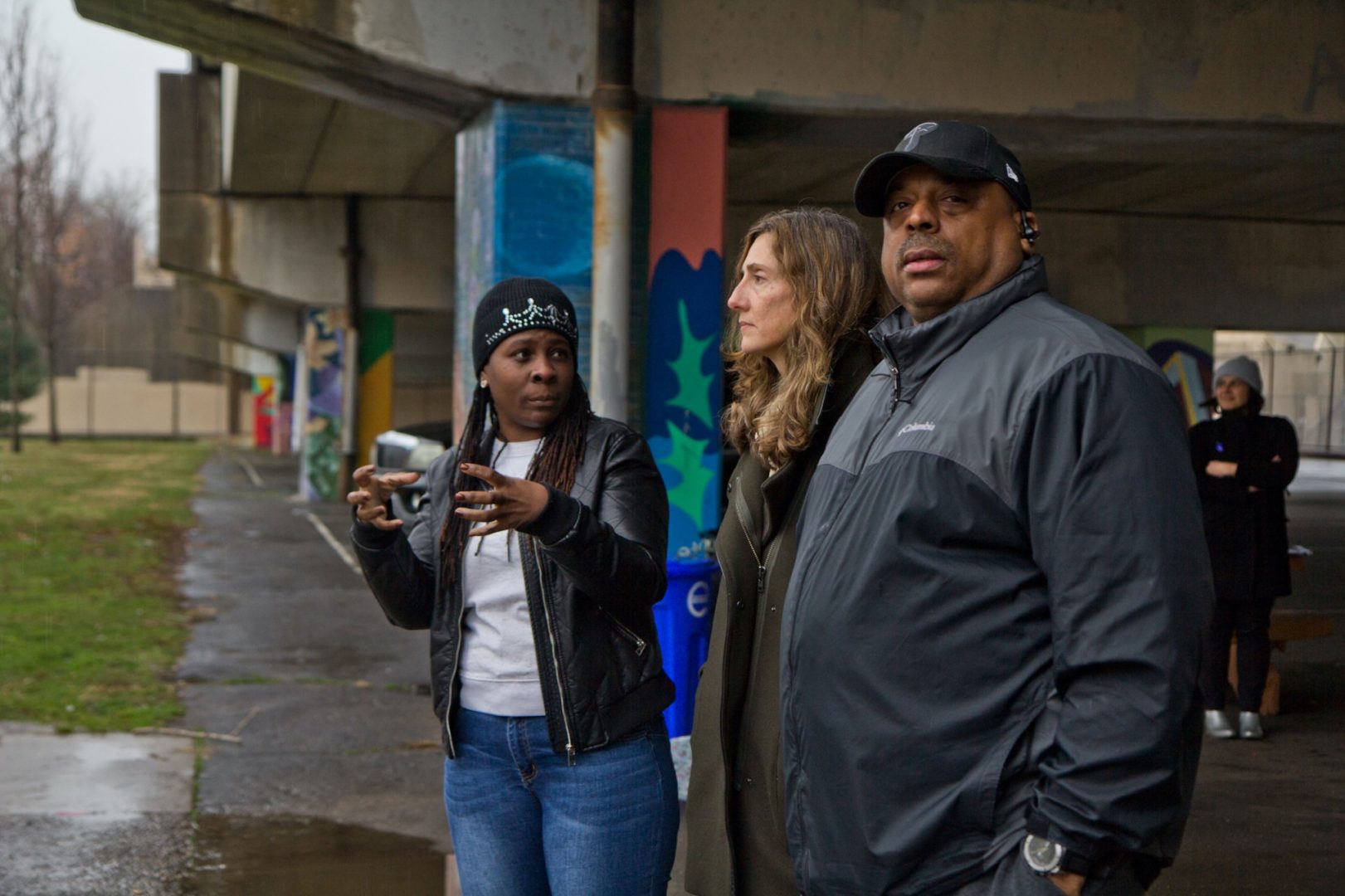 (Philadelphia) — Kira Strong used to laugh at the thought of having millions of dollars to spend on fixing Philadelphia’s neglected recreation centers.

“I used to joke with family, if I ever win the lottery: rec centers,” Strong recalled.

That was before anyone imagined a tax on sugary beverages — or a plan from Mayor Jim Kenney to renovate the city’s libraries and playgrounds using $500 million partially derived from one.

“So when Rebuild came, I was like, this is it! This is what I want to do,” said Strong, who took the reins as the program’s executive director in January after serving as its deputy director of design and construction for four years.

A lot is riding on the job Strong describes as “a total privilege,” including the legacy of her boss, the mayor, who pitched Rebuild as a public works project that would create jobs while addressing growing inequality and undoing the legacy of generations of racist urban planning.

The program’s first executive director Nicole Westerman stepped down in November after years of delays due to a court battle over the controversial soda tax and City Council concerns over the effectiveness of Rebuild’s push to employ a diverse workforce.

Discontent over the long delay may have contributed to Westerman’s departure, said West Philadelphia Councilmember Jamie Gauthier, who championed Rebuild as executive director of the Sustainable Business Network and then the Fairmount Park Conservancy.

After waiting years for the resolution of the soda tax lawsuit, the program finally began moving forward in late 2018 with renovations to a total of 72 facilities at 64 sites. Less than 12 months later, the Managing Director’s office, which oversees Rebuild, appeared to endorse Westerman’s decision to quit, saying in November that “the time is right for a change in leadership.”

“Lots of folks in the community fought for Rebuild through their advocacy for the soda tax, so they’ve been waiting for it for a long time,” said Gauthier, who praised Westerman’s competence and experience. “The frustration at the pace of the initiative was directed at her, unfortunately.”

Strong takes over Rebuild as her staff prepares to cut ribbons at five completed projects this spring and begin construction on 11 more.

“The expectations around Rebuild are really high,” Strong said. The challenge is “managing those expectations and frankly, trying to meet them, getting going quickly enough and producing the quality of the product we want to produce.”

She was at a rec center as she spoke, sitting in a tiny office at East Poplar Playground in North Philadelphia while children in the afterschool program chatted and played nearby. East Poplar is one of the 11 sites where construction is slated to begin this spring.

During her visit, she met with Wysenia Williams, a lifelong resident of the neighborhood and vice president of the rec center’s advisory board. Williams pointed out cracked slides, a swing set that hasn’t had swings for years, and a sprayground whose jets have lost pressure and just “spit.” Lead paint was found at the playground last summer and it had to be closed for remediation.

Children still congregate there, but after 40 years of neglect, the playground has become an attractive nuisance, Williams said.

“It does get a lot of use, but our kids, they come over for here for the wrong reasons, because there’s nothing for them to do,” she said. “Now that Rebuild is in play, they can come back over here and play. Thank God for Rebuild.”

Aspirations beyond bricks and mortar

When Strong joined Rebuild in 2016, she had 12 years of experience at the People’s Emergency Center Community Development Corporation, including several years as vice president of community and economic development. Strong said she supervised the nonprofit’s activities in five neighborhoods as it completed $65 million in real estate and economic developments. Under her watch, the group built housing for teenage mothers coming out of foster care and a mixed-used development on Lancaster Avenue, among other projects.

Before that she’d managed federally funded programs for the School District of Philadelphia.

But from early on, her eyes were on the rec centers. Some are in good condition and some need major repairs, but the 159 centers around the city serve as vital neighborhood hubs, hosting low-cost or free afterschool programs, summer camps, sports leagues, art classes, community meetings and much else.

At East Poplar, Rebuild’s community engagement process involves multiple rounds of public meetings and design proposals. After an initial design was presented, neighbors at a recent meeting asked Rebuild staffers to make sure there will be space between play areas for different age groups and enough outdoor seating for events. The community members also wanted to keep certain long-cherished pieces of playground equipment, like a set of hamburger-shaped pods atop ladders that kids like to climb into. 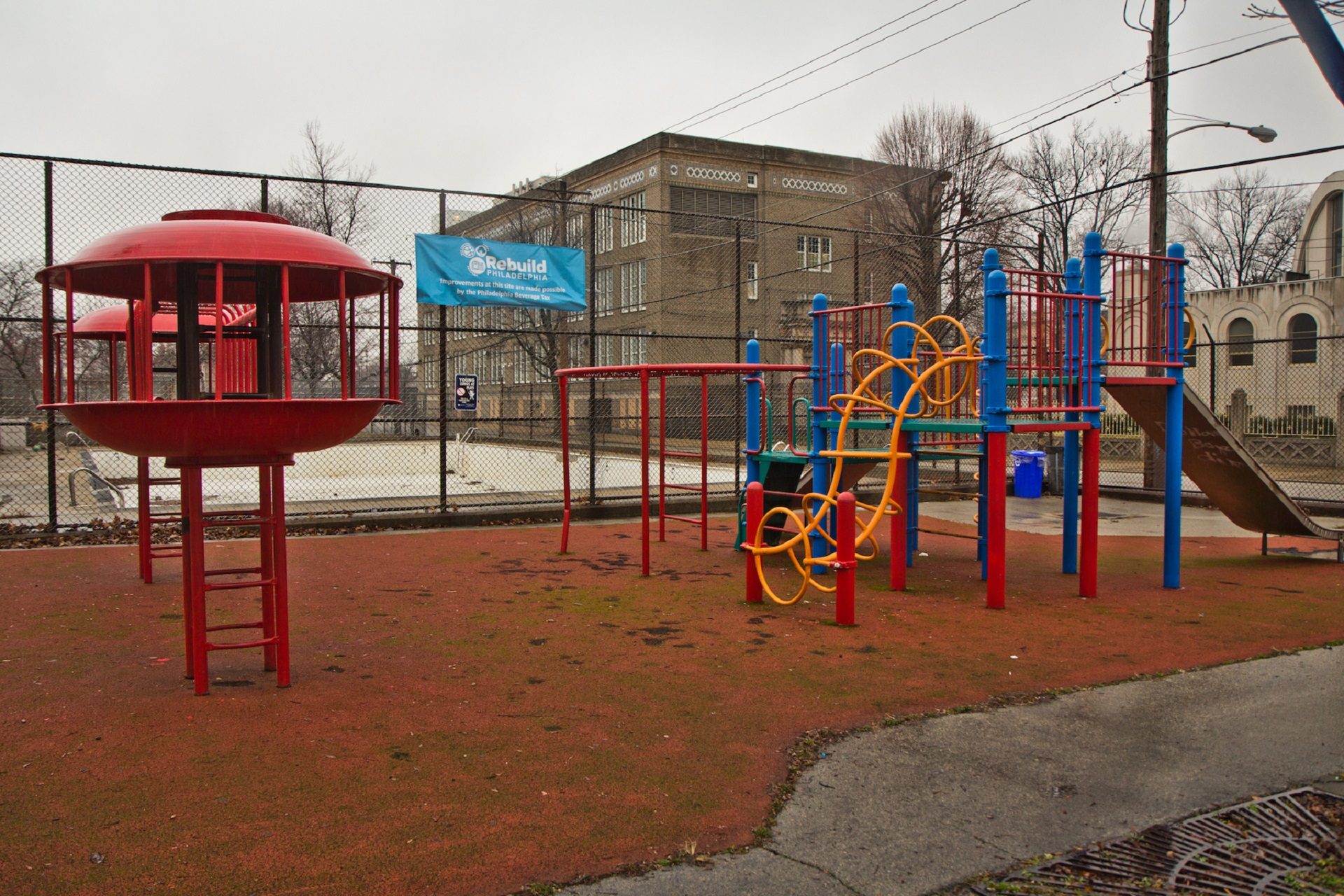 “They know these kids. They know what’s going on around here,” Strong said. “They know what that playground needs to meet the needs of the people who show up here every day. Our job is to reflect that and to guide the skilled design teams we work with, to be reflective of that expertise.”

Much as she and her staff do now at Rebuild, at the People’s Emergency Center, she worked closely with residents who were very familiar with the neighborhoods being revitalized, said Gauthier, who lived in West Philadelphia for years before becoming the area’s council representative.

“Someone that’s leading that work has to have the capacity not just to build things, but to engage community in a way that’s going to make those public spaces relevant to them, and have the know-how to make sure that their voices and their culture and their picture of community is reflected in that work,” Gauthier said of Strong. “She’s been really good at that over the years.”

George Matysik, former executive director of the Philadelphia Parks Alliance, knows well the challenges Rebuild has faced. He helped organize lobbying efforts to get the initiative approved and helped connect residents and rec center users to the initiative once it got going and needed input from communities.

Strong has already been the person to call at Rebuild when you needed to get something done, he said.

“Kira is a person who executes relentlessly,” said Matysik, who now heads the Share Food Program. “She is going to work around the clock to make sure there is a real sense of urgency within City Hall, within the Rebuild office, to get projects going. That’s exactly what this program needs right now.”

One piece of the Rebuild promise is economic opportunity for people who feel locked out of the city’s building industry.

As part of Rebuild, the city created Rebuild Ready, which teaches business management skills and helps participants get Rebuild contracts, and two initiatives to help participants join local unions: the PHL Pipeline apprenticeship program and a program for non-union tradespeople. In addition, the Emerging Vendors Program expedites certifications for minority- and women-owned firms so they can receive city contracts.

Amid concerns that these efforts would still not do enough to create jobs for minority contractors and help diversify the city’s largely white construction unions, council delayed passing a measure for months that Rebuild needed to move ahead. After Kenney threatened to scale the program down, council approved a list of project sites in July 2018, removing the last legislative hurdle to launching construction.

Rebuild’s ambitions to broadly improve the lives of residents in neighborhoods throughout the city make it a complex, time-consuming, and at times politically delicate effort, park advocates say. But Strong said those aspirations also make the program worthwhile and gratifying to lead.

“For me personally, doing a capital works project, careerwise, would not have been a compelling job,” she said. “The vision of what Rebuild should be and will be is what makes this a really innovative and unique program.”

Gunfire took the life of a beloved Pa. chef. His family wants to know why.