Residents wearing masks wait at a traffic light in Beijing, China Thursday, Feb. 13, 2020. China is struggling to restart its economy after the annual Lunar New Year holiday was extended to try to keep people home and contain novel coronavirus. Traffic remained light in Beijing, and many people were still working at home.

Likely a response to the scarcity of test kits and questions about their reliability, the move caused a nine-fold increase in new reported cases in the province.

(Beijing) — China’s Hubei province expanded its criteria for identifying new coronavirus infections on Thursday, causing a dramatic spike in reported cases at the epicenter of the disease, as Beijing moved to purge provincial party officials amid criticism of their handling of the epidemic.

Hubei, where the majority of the world’s infections have been concentrated, added a new category of “clinical cases” to its reporting. Now, patients will be included who exhibit all the symptoms of COVID-19, the disease caused by the coronavirus — including fever, cough and shortness of breath — but have either not been tested or tested negative for the virus itself.

The change — likely a response to the scarcity of test kits and questions about their reliability — caused a nine-fold increase in new reported cases in the province.

So far, Hubei is the only province that has revised its definition of new cases. Others have not publicly reported “clinical” or asymptomatic cases. Beijing is expected later Thursday to report new nationwide statistics.

Change in Hubei case reporting has made it next to impossible to track its coronavirus trend.

Here is what new confirmed cases would have looked like according to the old method (testing) vs new method (clinical diagnosis). On old basis it would have been another decline today. pic.twitter.com/4EIF4cCjC1

The new numbers from Hubei added significantly to the latest China-wide figures reported Thursday: 15,152 new cases and 254 deaths. In its latest situation report, the World Health Organization reported Wednesday a total of 441 confirmed cases and one death (in the Philippines) in 24 countries outside China. WHO’s risk assessment for the virus is “very high” for China, and “high” regionally and globally.

With the latest numbers, there have been nearly 60,000 cases worldwide and more than 1,300 deaths.

Earlier this week, China’s senior epidemiologist, Zhong Nanshan, had said he believed the coronavirus pandemic would peak in late February and be finished by April. However, the new reporting criteria from Hubei has thrown previous estimates of the disease’s progression in China into disarray.

If the same counting method is adopted nationwide, it would disrupt the trend lines even further.

The high-level shakeup is testament to how seriously Beijing is taking widespread criticism from abroad and, most unusually, from the public at home, with many Chinese having taken to social media to express their frustration. 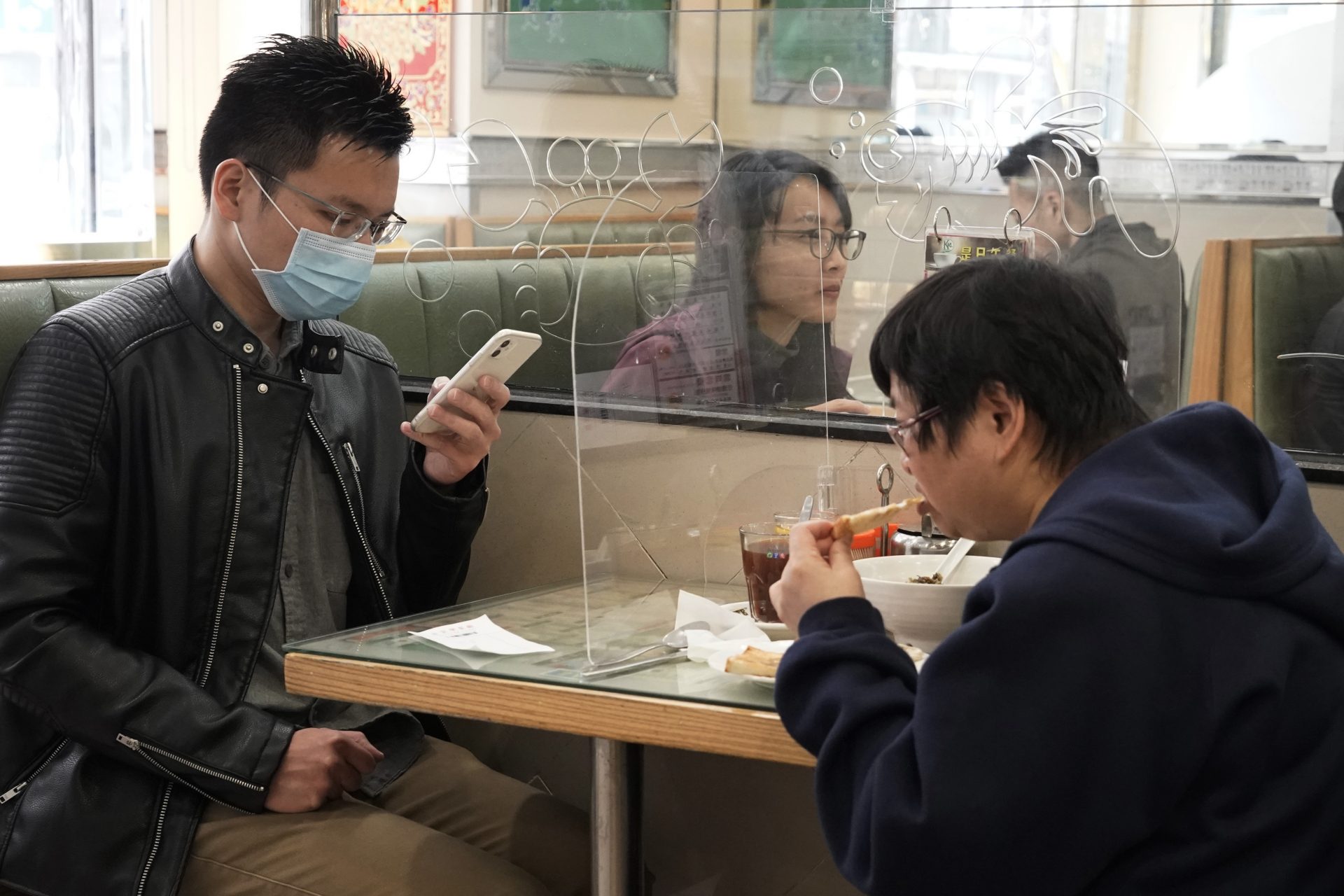 Customers have lunch with a transparent plastic panel setup on the table to isolate each other to prevent spreading of the coronavirus in Hong Kong, Wednesday, Feb. 12, 2020. China’s ruling Communist Party needs to make a politically fraught decision: Admit a viral outbreak isn’t under control and cancel this year’s highest-profile official event. Or bring 3,000 legislators to Beijing next month and risk fueling public anger at the government’s handling of the disease.

Academics in China, angered by the silencing of a whistleblower doctor who tried to sound the alarm in the early days of the epidemic and later succumbed to the disease himself, have also signed a public petition to “demand free speech,” the South China Morning Post reports.

Jiang’s ouster follows the firing of two of the province’s top health officials earlier this week. The Communist Party’s People’s Daily reports that Ma Guoqiang, party leader in the city of Wuhan, Hubei’s provincial capital, was also set to be dismissed and replaced by Wang Zhonglin, party secretary of Jinan, the provincial capital of Shandong province.

The appointment of Ying, Wang and Chen Yixin, the deputy head of the new national task force overseeing the handling of the crisis, could signal Beijing’s concern over instability caused by the epidemic. Ying and Yixin are both close to Chinese leader Xi Jinping and all three officials have backgrounds in state security.

Chen said Tuesday that the situation in hardest-hit Wuhan was still uncertain and that “the scale of the spread has not been accurately estimated.”

Centrally located Wuhan, a city of more than 11 million, has been under quarantine for weeks with transport in and out of the metropolis shut down to prevent the spread of the disease. At least a dozen other Chinese cities, home to more than 60 million people combined, have been put on similar lock down.

Beijing has forecast that the economic impact of the pandemic could shave a full percentage point off its first-quarter GDP. Disruptions to Chinese manufacturers have also had a knock-on effect for factories around the world that are dependent on China as a key link in their supply chains. In many cases, the disease has simply compounded the problems already experienced by the ongoing U.S.-China trade war.

Businesses in Wuhan have been told to remain closed until at least Feb. 21. Schools and universities are also closed until further notice.

Fear of contagion has also caused the U.S., and much of Asia and Europe, to implement travel restrictions on visitors from China.

In Japan, a cruise liner, the Diamond Princess, has been in quarantine for days in the port of Yokohama, near Tokyo, as the number of confirmed cases aboard continues to rise.

Japan’s health ministry said Thursday that 44 new cases had been identified on the giant cruise ship, bringing the total to 218 among the vessel’s 3,700 passengers and crew.

Another cruise ship, the MS Westerdam, which made port calls last month in Singapore and Hong Kong – two places that have reported coronavirus cases — has prompted fear and concern from officials in many countries. Despite having no reported cases of coronavirus among its 1,455 passengers and 802 crew members, the vessel, operated by Holland America, has been turned away by Japan, Taiwan, the Philippines, Guam and Thailand.

The saga of the wayward Westerdam had been going on for days until Cambodia finally allowed it to dock there. Marinetraffic.com on Thursday listed the Westerdam as anchored at the port of Sihanoukville, where Holland America said in a statement Wednesday that the cruise would end.

“Guests will disembark in Sihanoukville over the next few days and transfer via charter flights to Phnom Penh for forward travel home,” the statement on the cruise operator’s website said. “Holland America Line will arrange and pay for all flights home, in addition to the full cruise refund and 100% future cruise credit already communicated.”

Proposal tries to snuff out indoor smoking exemptions in Pennsylvania