A fire burns at the Philadelphia Energy Solutions refinery hours after a series of early morning explosions at the 150-year-old industrial complex at 3100 W. Passyunk Ave.

The proposal stems from last summer’s explosion at the Philadelphia Energy Solutions refinery in South Philadelphia.

(Philadelphia) — Legislation to ban a deadly chemical from refining operations will be introduced this week in Philadelphia City Council. Hydrofluoric acid, or HF,  is one of the most dangerous industrial chemicals in use.

The proposal stems from last summer’s explosion at the Philadelphia Energy Solutions refinery in South Philadelphia. The shuttered refinery is winding its way through bankruptcy and the future of the site is unclear.

The June 21 explosion released more than 5,000 pounds of the toxic chemical. Although no one was injured, Philadelphia Managing Director Brian Abernathy said the city narrowly escaped a disaster.

Residents in the neighborhood surrounding the refinery have long complained about odors and poor air quality they say led to illnesses. But few knew about the hidden danger of hydrofluoric acid, which was used as a catalyst to make high-octane fuel.

Exposure to HF causes serious injury or death. The chemical penetrates the skin and reacts with calcium in the bones. According to the Centers for Disease Control and Prevention, low levels can irritate the eyes, nose and respiratory tract. High levels “can cause death from an irregular heartbeat or fluid buildup in the lungs.” 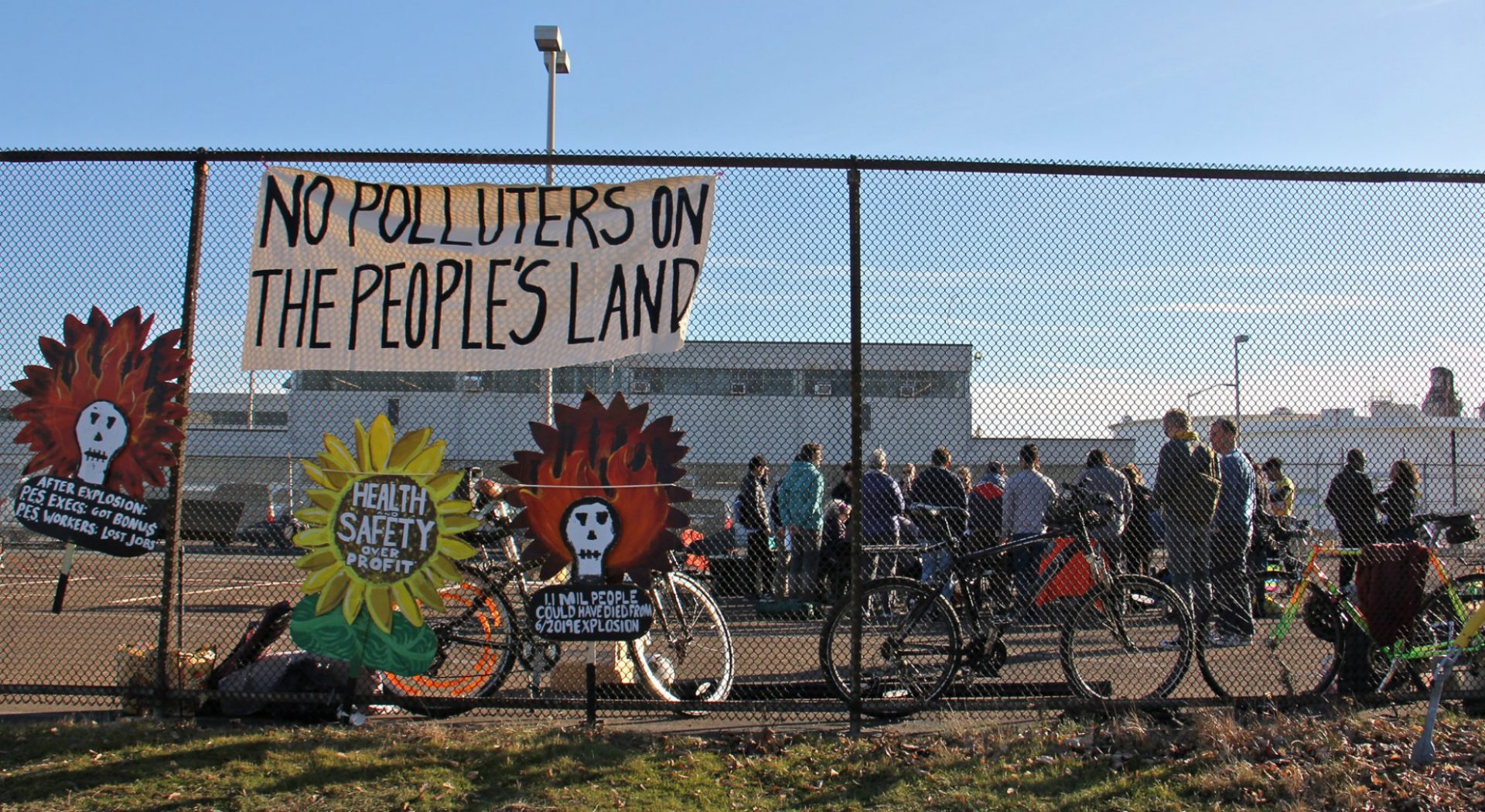 Protesters gather in a parking lot at the Philadelphia Energy Solutions refinery office on Passyunk Avenue in South Philadelphia.

Mayor Jim Kenney said regulation of HF stemmed from the Refinery Advisory Group meetings that took place in the wake of the refinery explosion.

“With the passage of this legislation, large quantities of HF will never return to the Philadelphia refinery site again,” Kenney said in a statement. “I urge other communities, as well as the federal government, to follow Philadelphia’s lead and phase out the use of HF in the refining industry entirely – for the safety of the workers as well as nearby communities.”

Groups of residents in Southern California have tried to ban HF from refineries but have failed. Five years ago, an explosion occurred at a refinery in Torrance, California, when heavy debris landed just three feet from an HF storage tank.

Jim Eninger is a physicist who worked with HF for decades in the aeronautics industry.

“It’s a very dangerous place to store massive amounts of one of the most dangerous industrial chemicals,” Eninger said.

The Environmental Protection Agency and the Occupational Safety and Health Administration both regulate hydrofluoric acid.

OSHA does so under the Process Safety Management of Highly Hazardous Chemicals. The EPA’s Risk Management Plan Rule governs public disclosures surrounding the use and accidental release of toxic chemicals as well as emergency response.

The Obama administration had boosted those rules, but Trump’s EPA recently rolled back some of the provisions, including the requirement of industry to assess the use of safer alternatives.

Refineries are required to file worst-case scenarios for the release of toxic chemicals. PES’ worst-case scenario included a release of 143,262 pounds of HF over 10 minutes, which could travel as a toxic cloud for more than seven miles and potentially impact 1,098,799 people, including those in schools, homes, hospitals, prisons, playgrounds, parks and a wildlife sanctuary.

Just two months before the PES explosion, the U.S. Chemical Safety and Hazard Investigation Board wrote to the EPA, urging it to review its 1993 HF study to determine whether the required Risk Management Plans are sufficient, and if safer alternatives could be used.

The letter referenced the 2015 Torrance, California, explosion as well as an explosion and fire on April 26, 2018, at the Husky refinery in Superior, Wisconsin. In that case, debris tossed into the air did not hit the HF storage tanks, but parts of the town were evacuated for fear of an HF release. 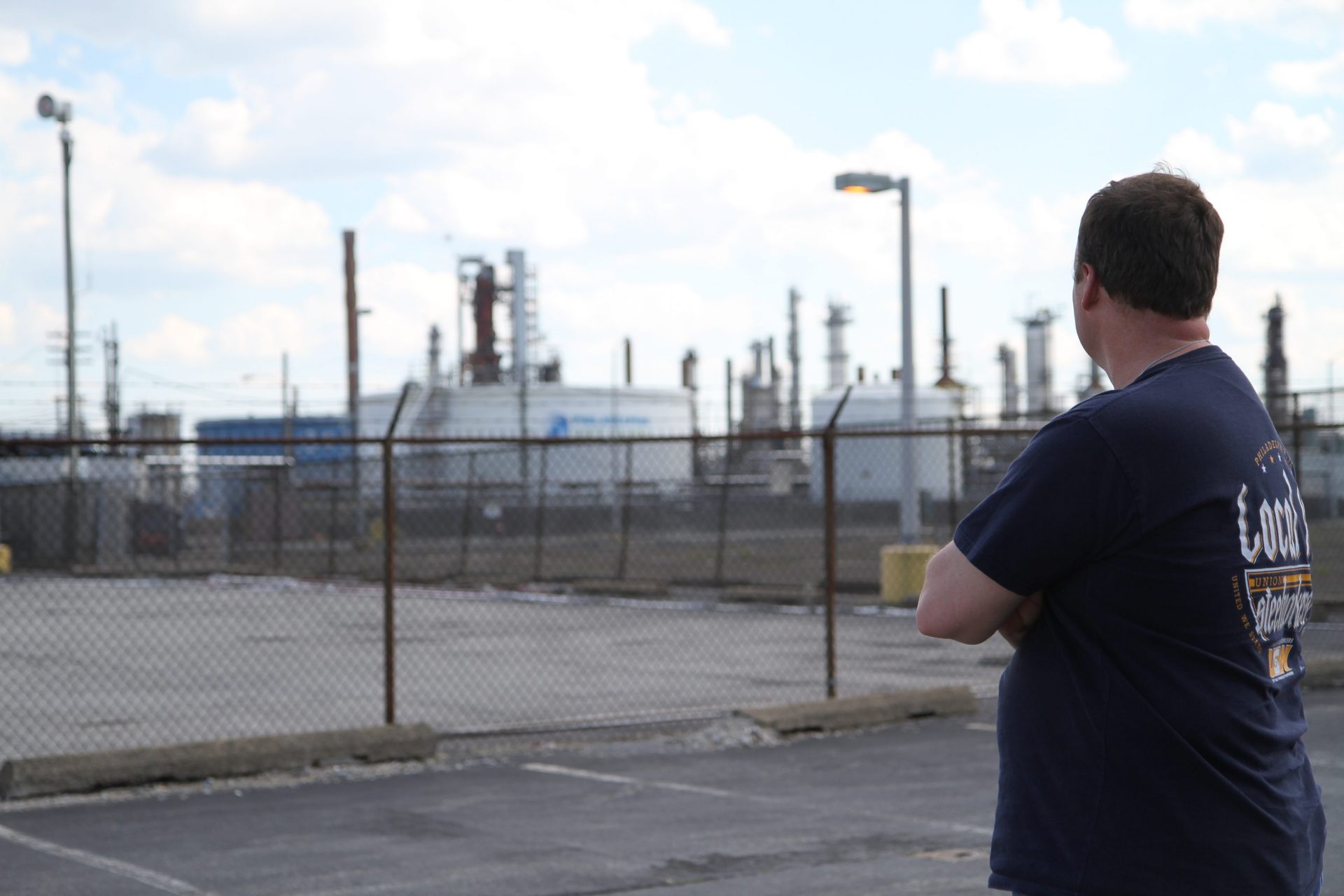 Ryan O’Callaghan is president of the United Steelworkers Local 10-1, which represents 640 union workers at Philadelphia Energy Solutions. The 150-year-old refinery is shutting down after a fire destroyed one of its units.

The PES refinery entered Chapter 11 bankruptcy soon after the explosion. A hearing scheduled for Wednesday will consider a proposed sale to Hilco Redevelopment Partners of Chicago. The company said it wants to continue industrial uses of the site, but not a refining operation.

The sale is challenged by a number of creditors. A second bidder, IRG, includes former Philadelphia Energy Solutions CEO Phil Rinaldi as a partner. Rinaldi wants to reopen the site as a refinery but said it would never use HF again, and instead use one of two safer alternatives.

“There’s no reason for people to have any kind of concern about that,” Rinaldi said.

PES is the only refining operation in the city. Two other refineries in the region currently use HF, but the city’s ban would not apply to them. Monroe Energy in Trainer, Delaware County, and the PBF refinery in Paulsboro, New Jersey, use HF as a catalyst.

The Clean Air Council criticized the legislation as not going far enough. The Council’s executive director, Joe Minott, said HF should be banned from all sites across the city.

“It’s a great start, but it’s nowhere near what it should be to protect public health,” Minott said.

HF is used to etch glass and is often used as a chemical in university labs. It’s also used in other industrial processes like refrigeration, electronics manufacturing and rust removal. Minott said the city should find out where the substance is used and in what quantities before drafting legislation that may be moot if the PES site ends up as a facility that doesn’t use HF.

City Councilmember Kenyatta Johnson plans to introduce the legislation, which would require a change in the city’s fire code.