Citizen activist Gene Stilp prepares to strike a match to set one of his Trump campaign flags on fire outside the Pa. Capitol on Dec. 5, 2019. On Tuesday, a Harrisburg district judge found him not guilty of violating a city burn ban.

"I hope we see a lot more First Amendment speech on the Capitol grounds. People shouldn’t be afraid to do that. This is a very good step.”

(Harrisburg) — A Harrisburg district judge found political activist Gene Stilp not guilty of a Harrisburg ordinance prohibiting illegal burning Tuesday, saying the ordinance as written is so broad that it could improperly squelch common forms of political speech like flag-burning.

Stilp was cited under the city’s public health code in December, after he set fire to a set of three flags from the re-election campaign of President Donald J. Trump. 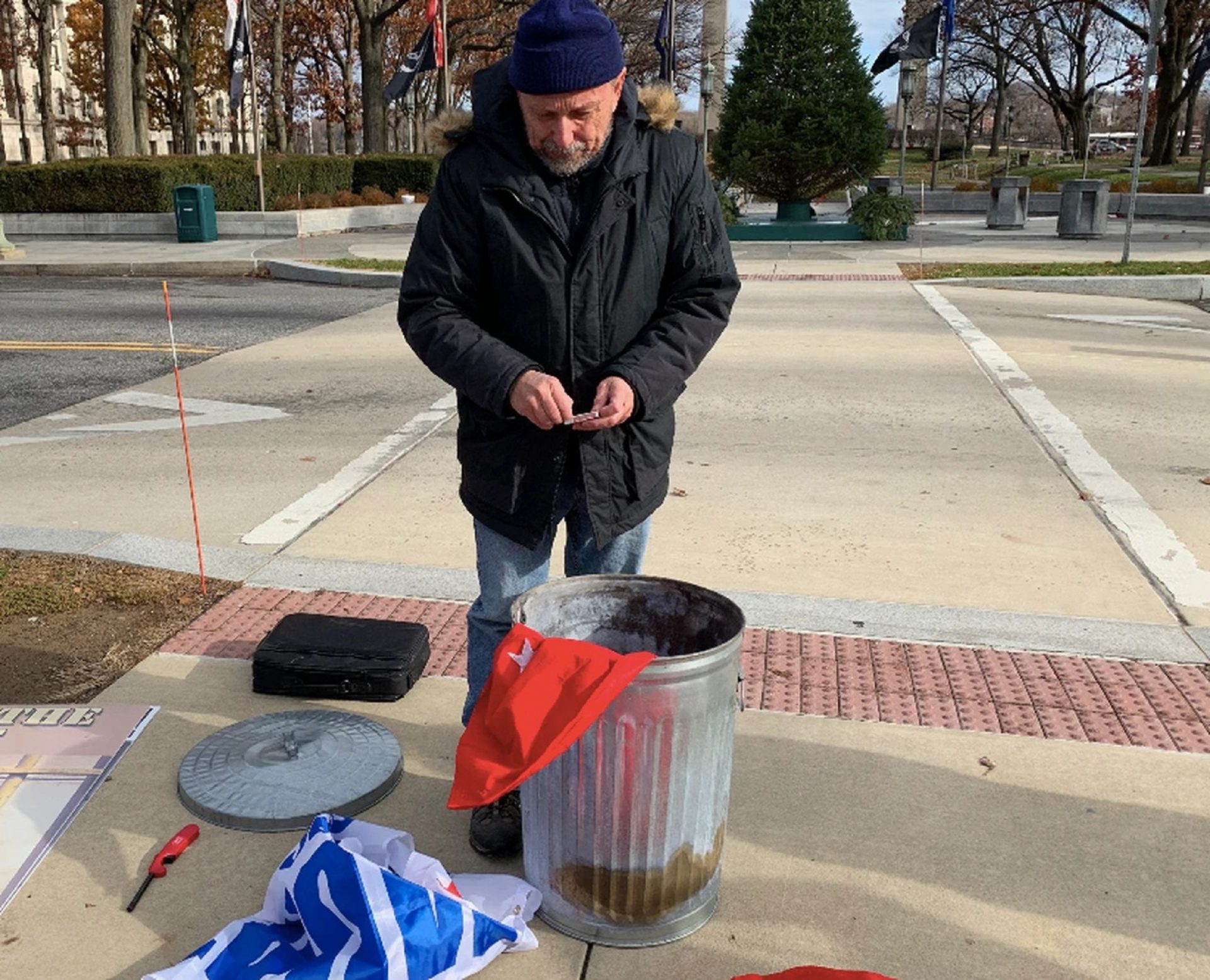 Citizen activist Gene Stilp prepares to strike a match to set one of his Trump campaign flags on fire outside the Pa. Capitol on Dec. 5, 2019. On Tuesday, a Harrisburg district judge found him not guilty of violating a city burn ban.

Stilp had initially been granted a permit for his protest – including the planned burning – but that approval was revoked the night before because of a forecast of high winds for the following morning, and concern that a stray ember could spark a brush fire on the Capitol grounds, and specifically in the Soldier’s Grove park across the street from Stilp’s protest site.

Stilp was informed of the state Department of General Services’ change of heart by email the night before, and Capitol Police reiterated the change in the minutes before the protest, warning Stilp that he would be cited if he proceeded with the flag-burning.

After a brief hearing Tuesday, Magisterial District Judge David O’Leary said he interpreted the ordinance in question to be intended to pertain to trash, yard waste and other rubbish.

“I don’t think the flags that are being burned in political protests… are “waste material,” O’Leary said. “So my first conclusion about this is, I think the statute can be reasonably interpreted not to prohibit what the defendant did.”

If it does in fact cover flags, the judge added, then it is probably over-broad and violates free speech rights.

With that, he pronounced Stilp not guilty. 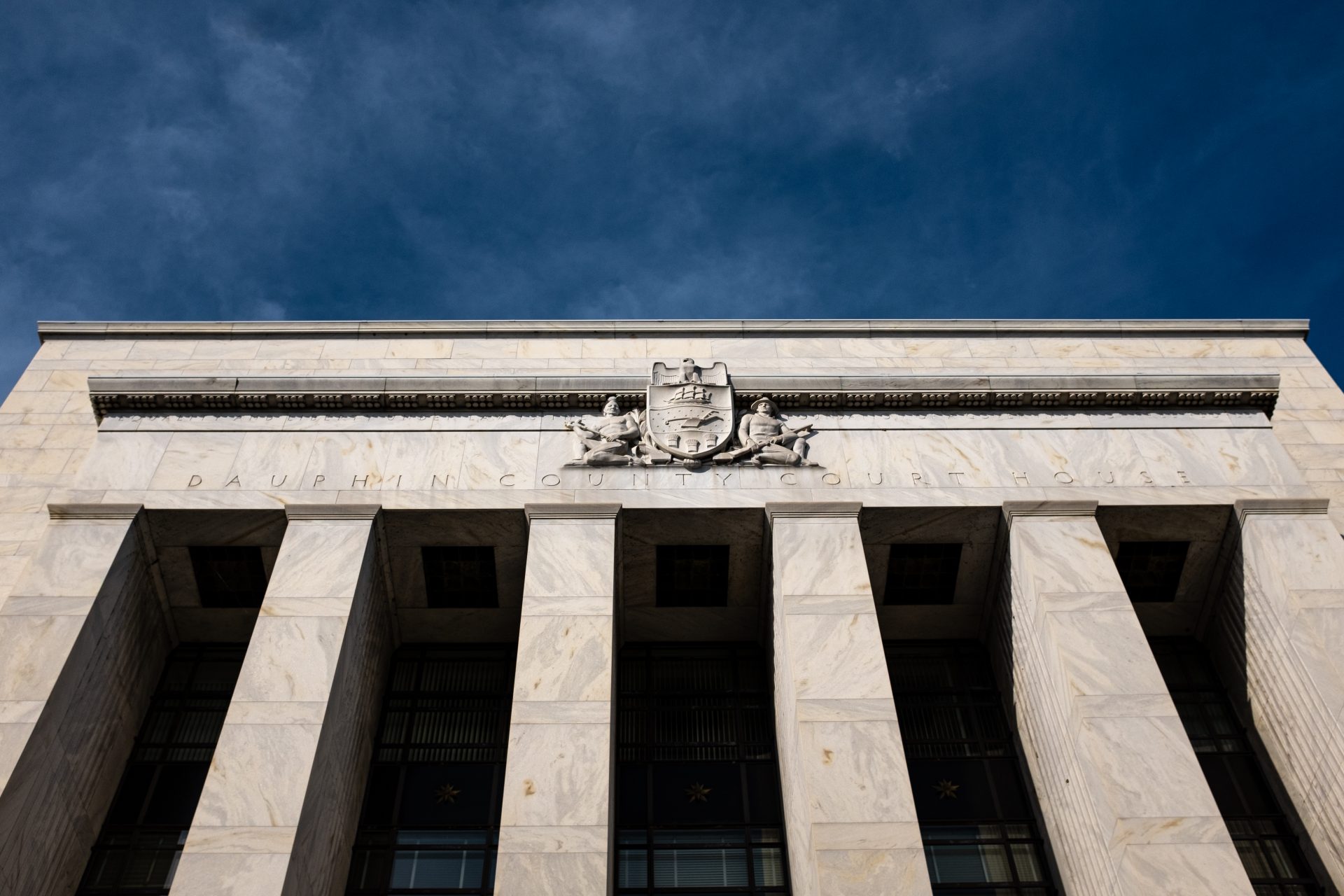 Stilp, a Middle Paxton Township, Dauphin County resident who is without question the modern-day leader in Pennsylvania State Capitol protests, said he was contesting the summary citation not so to beat the fine or clear his good name as to strike a necessary blow for free speech in what is likely to be a contentious election year.

“I hope it’s a learning experience for a lot of people to look at this case, and they can take this, and I hope we see a lot more First Amendment speech on the Capitol grounds. People shouldn’t be afraid to do that,” Stilp said. “This is a very good step.”

Aaron Martin, the attorney representing Stilp at Tuesday’s hearing, noted he plans to file an action in federal court next week to have the city’s ordinance voided on First Amendment grounds. “The point is, we’re in the midst of a presidential election, and Mr. Stilp doesn’t have time to wait for city council to take action.

“He wants to conduct these protests now,” Martin said.

On Dec. 5., 2019 Stilp and a small knot of supporters arrived at the Capitol with a metal trash can and doctored-up Trump campaign flags with the intent on setting them ablaze.

They included one flag sewn to a Nazi flag to represent what Stilp said he sees as the president’s racist and intolerant attitude and “misguided values” toward non-whites. Another was a Trump 2020 flag attached to the former Soviet Union flag to symbolize what he called the president’s dictatorial style that resembles Russian President Vladimir Putin.

The third was a Trump campaign flag that had displayed the words “No more bull—-,” which Stilp said is insulting to citizens and “not good for the children of Pennsylvania to see.” 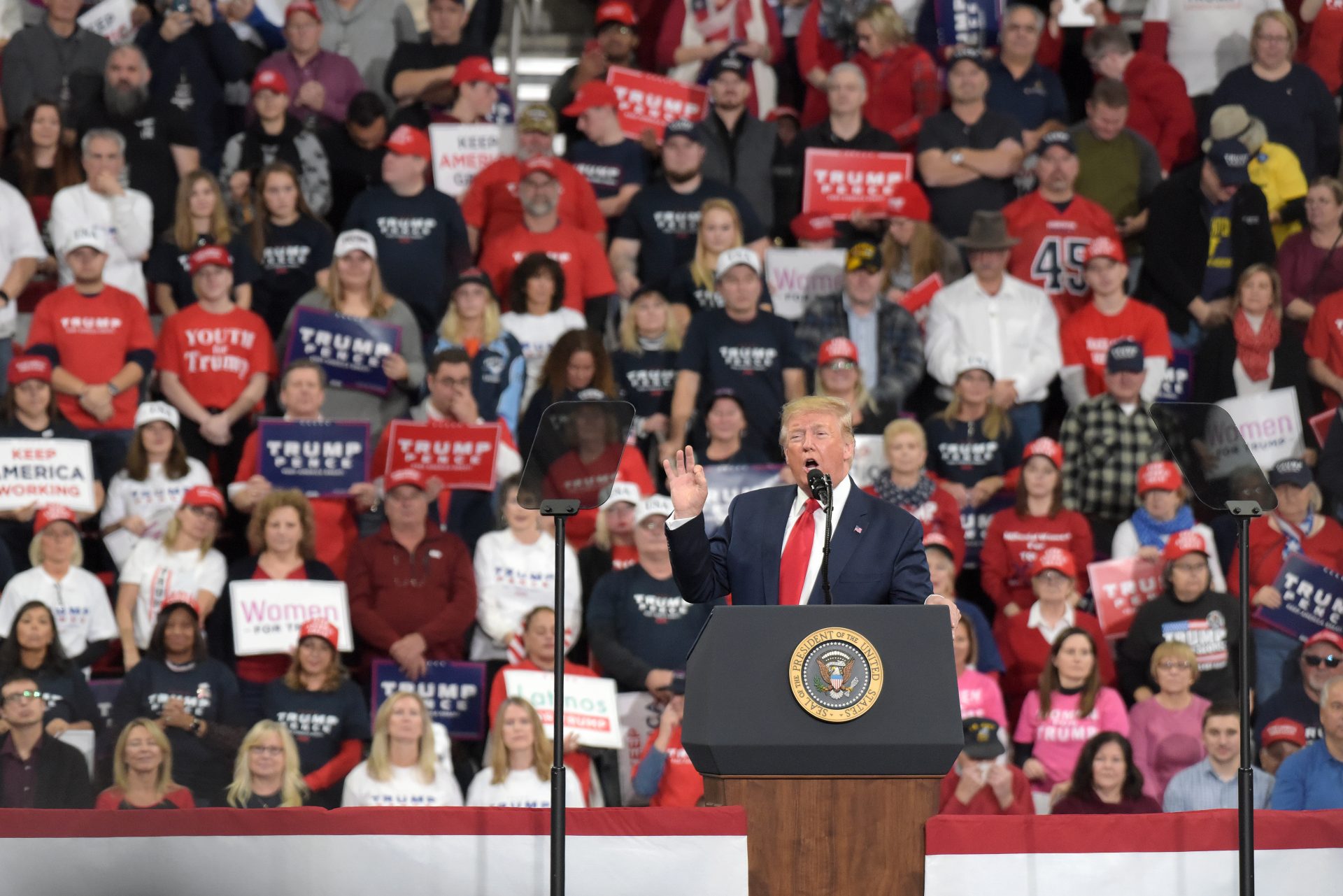 President Donald Trump speaks during a 2020 campaign rally Dec. 10, 2019, at the Giant Center in Hershey, Pennsylvania.

Capitol Police Sgt. Michael Schmidt was standing by, and extinguished the flames literally as soon as Stilp ignited them, but the, following Schmidt’s warning, earned him the citation.

Besides the Dec. 5 protest, Stilp has done similar protests in California, in Washington D.C., and in Hershey outside the president’s Giant Center rally on Dec. 10.

But he was really intent on fighting the citation because he plans to burn more of the Trump flags “in the parts of Pennsylvania that voted for Trump (in 2016). We’re going to be doing that because we want to hold up a mirror to ask the people: ‘Are these really the values that you believe in?’” Stilp said.

Schmidt took the defeat in stride.

He said Capitol Police traditionally do not appeal decisions on summary citations, but he did express hope Stilp and all other demonstrators who want to make points at the Capitol just apply “common sense” to what their doing.

During the hearing, however, Stilp took pains in his direct testimony to stress that he never felt he was putting anyone at risk, noting not only did he bring a metal trash can to contain his fire, but that he is a member of the Middle Paxton Fire Company who has, in the past, served on task forces called to battle forest fires in Pennsylvania.