Darby Steiger of the research company Westat reviews the results of a sweeping survey of the Philadelphia area's Jewish community.

As Jewish population in Philly region expands, so does definition of who is considered Jewish 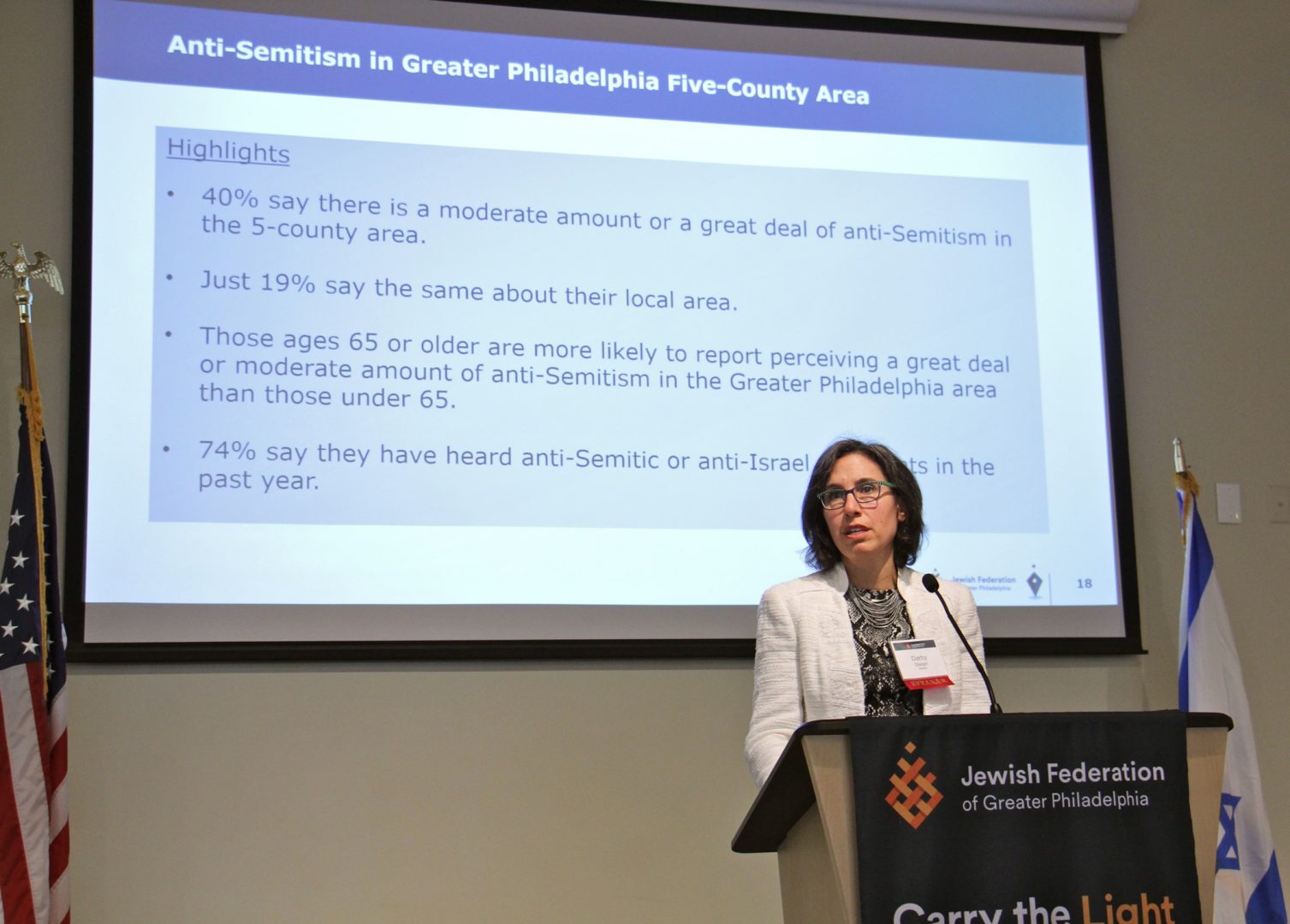 Darby Steiger of the research company Westat reviews the results of a sweeping survey of the Philadelphia area's Jewish community.

(Philadelphia) — In a first-of-its-kind survey released Tuesday, the Jewish Federation of Greater Philadelphia found that the Jewish population in the five-county Philadelphia region has increased by 60% over the last 10 years.

In 2009, there were 116,700 Jewish households. Now, researchers report 194,200 households that contain at least one Jewish adult. That gives the Philadelphia metro area the third-largest population of Jews in the country — for now.

“Enjoy No. 3 — it may not last,” joked study author Darby Steiger of Westat, a Maryland-based research corporation that conducted the survey.

Steiger said the growth can largely be attributed to a change in survey methodology, which other major metropolitan areas have not yet implemented to update their population surveys. Once they do, the rankings could change. For instance, Chicago’s Jewish population ranks sixth in the country now, but that could shift after the updated survey is sent out in April.

Philadelphia is the first Jewish community to use address-based sampling to conduct such a population survey. For the 2009 survey, researchers relied on calling landlines to make contact with families. This time, researchers from Westat used statistical modeling to determine a list of thousands of potentially Jewish households in Bucks, Chester, Delaware, Montgomery and Philadelphia counties to which the questionnaire would be distributed. Between January and July 2019, 2,119 people completed surveys, which were offered in English and Russian.

Some of the increase can be explained by overall growth in the Philadelphia metro region, whose population rose by 2.6% over the last decade.

The growth can also be attributed to an expanded definition of who is considered Jewish. In addition to those who practice Judaism religiously and those who identify with the label culturally or ethnically, the 2019 survey counts those who were raised Jewish or have a Jewish parent, even if that person does not identify personally as Jewish. This more expansive definition accounts for the “fluid nature of Jewish identification and the Jewish connection of many who do not report any religion,” according to the study’s authors. Steiger said just 5% of the 60% population increase can be attributed to this broadened definition.

“The approach to what we see as traditional Jewish practice is changing,” said federation board chair Susanna Lachs Adler. “Jews are finding new and creative ways to worship and to identify themselves.”

Indeed, the survey found that consistent with national trends, synagogue membership has decreased — only a quarter of Jewish households belong to synagogues or temples. Almost half of married Jews are in interfaith marriages.

Philadelphia City Councilmember Allan Domb, who made introductory remarks at the survey’s release, said that concrete numbers like these can help policymakers craft more informed and targeted legislation.

“Having access to the most up-to-date data helps us understand the changing dynamics within a specific community,” Domb said. “In too many instances, the general perception about a community is derived from what we read, see and hear through all forms of media — especially online social feeds.”

The questionnaires were distributed starting in January 2019, a few months after the shooting at Tree of Life Synagogue in Pittsburgh. Forty percent of respondents said they felt there was a great deal or moderate amount of antisemitism in the five-county Philadelphia area, but only half that number reported antisemitism where they live. “Anti-Israel sentiment” was included in the definition of antisemitism.

Politically, the survey found that nearly 40% of those surveyed favored a two-state solution to the Israeli-Palestinian conflict, which would establish an independent Palestinian state. Sixteen percent opposed that option, and the rest did not express an opinion.