Rodney Everett, 61,takes on a walk in his Grays Ferry neighborhood, and worried living near the former Philadelphia Energy Solutions Refinery would make him sick.

“People want to know what the air quality is like in their neighborhood."

(Philadelphia) — Rodney Everett, 61, worries about getting sick whenever he walks outside in his Grays Ferry neighborhood.

The longtime South Philadelphia resident lives near the former Philadelphia Energy Solutions refinery. Before a catastrophic explosion and fire shuttered the hulking facility last year, it sent more pollution into the air than any other single source in the city.

Pretty much every day, the refinery sent thick black-gray plumes of smoke into the air, to mingle with emissions from nearby Philadelphia International Airport and the two interstate highways that run through Grays Ferry.

“People are paying to live in a sick area,” said Everett, a member of the local activist group Philly Thrive.

That perception is a common one. Yet Philadelphia officials have no way to know if the air Everett breathes is any different than the air elsewhere in the city, long ranked by the American Lung Association as one of the worst places to breathe in the United States. Asthma rates soar sky-high in the city, especially in black and brown neighborhoods such as Everett’s.

Like most U.S. cities and towns, Philly has abided by federal environmental regulations mandating minimal air quality monitoring but has done little else to build the public’s understanding of the pollution that surrounds them.

Now, that is changing. After years of preparation, city officials will be releasing the first report quantifying the street-level pollution in each and every Philadelphia neighborhood. The report is scheduled for public release later this winter or in early spring.

“People want to know what the air quality is like in their neighborhood, that’s a very reasonable request. Up until now, we have not been able to tell them that,” said Philadelphia Health Commissioner Thomas Farley.

The $600,000-per-year initiative has put air monitors capable of recording pollution levels at 50 sites across the city. The data from the monitors will be analyzed and translated into an annual report with maps that show residents what’s in the air they breathe every season.

Philadelphia’s first air quality survey will come out at a time when many people in the city are thinking about the toxins they breathe in. The Philadelphia Federation of Teachers sued the School District of Philadelphia last month over its handling of asbestos, lead and other airborne hazards. Meanwhile, former PES workers and union leaders are fighting in bankruptcy court to reopen the refinery in South Philadelphia as city officials back a plan to bring non-petroleum-production uses to the site, citing concerns about public health and pollution.

June’s explosion at the refinery sent highly toxic hydrofluoric acid and hydrocarbons into the atmosphere. High levels of benzene, a cancer-causing chemical, were detected at the boundaries of the refinery all through the year, but residents had no way to know that until months later. In fact, city officials told residents that there was no evidence that the air wasn’t safe to breathe. Experts say having no evidence doesn’t guarantee the air was safe.

For many people, including members of a Refinery Advisory Group convened by Mayor Jim Kenney, the PES explosion and fire demonstrated the need to improve the city’s air monitoring capabilities to be able to protect residents.

“It will tell us relative [air quality] difference across the city and between different neighborhoods, but it’s not going to be something suitable for an auto shop fire or the PES fire. It’s not designed for that,” said DeCarlo.

Farley doesn’t disagree with DeCarlo’s assessment. But he said measuring more is always good — and that’s what the Philadelphia Air Quality Survey is doing. By being able to see air pollution variations in different areas of the city every season, the city could identify hot spots for pollutants and plan how to control them.

Measuring the pollution we breathe

Farley’s 50 PAQS monitoring sites are spread across the city’s four quadrants, with more of them concentrated in the dense central core spanning Kensington to South Philadelphia. Most of the sites were randomly selected using GIS mapping techniques, to make the data statistically representative. 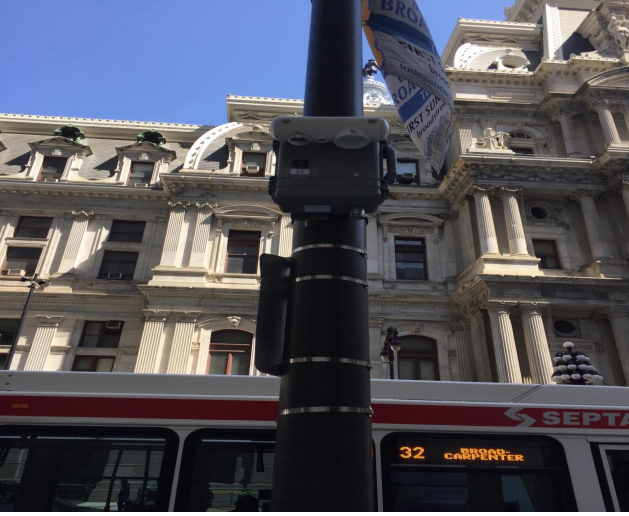 One of the city’s new air monitors is installed near City Hall. (City of Philadelphia)

All the monitoring units sample fine particulate matter — the solid or liquid particles present in the air, such as soot or dust, that can cause serious health problems. At some sites, the units also measure nitrogen dioxide, sulfur dioxide, and ground ozone.

Farley said the PAQS data will inform policy recommendations for reducing pollution from specific sources at certain times of the year, analyze relations between air quality and land use, and provide a basis for studying public health impact of air pollution in the city. In New York, the same project — implemented by Farley when he directed that city’s health department 10 years ago — led city government to prohibit buildings from burning heavy fuels. The commissioner said Philadelphia’s survey will help illuminate the logical next step to improve air quality locally.

“We need to look at the results and see what they point to as far as the sources and the people affected,” Farley said.

Beyond the new monitors, the city operates 10 other monitoring stations to track ambient pollution and comply with federal air quality regulations. Those stations, located 20 to 25 feet from the ground, measure an average of pollutants floating in the air, regulated by the Environmental Protection Agency.

But because they’re up high and air quality varies with height — lighter, fine particles tend to rise, heavier ones tend to stay at ground level — the sensors can’t determine what exactly is in the air that people breathe every day. One of the biggest advantages of the PAQS is that the monitoring stations are at people-level, 10 to 12 feet above the ground.

“What we care about is what people are exposed to, so measuring at the street level is a major advance with this system,” said Farley. 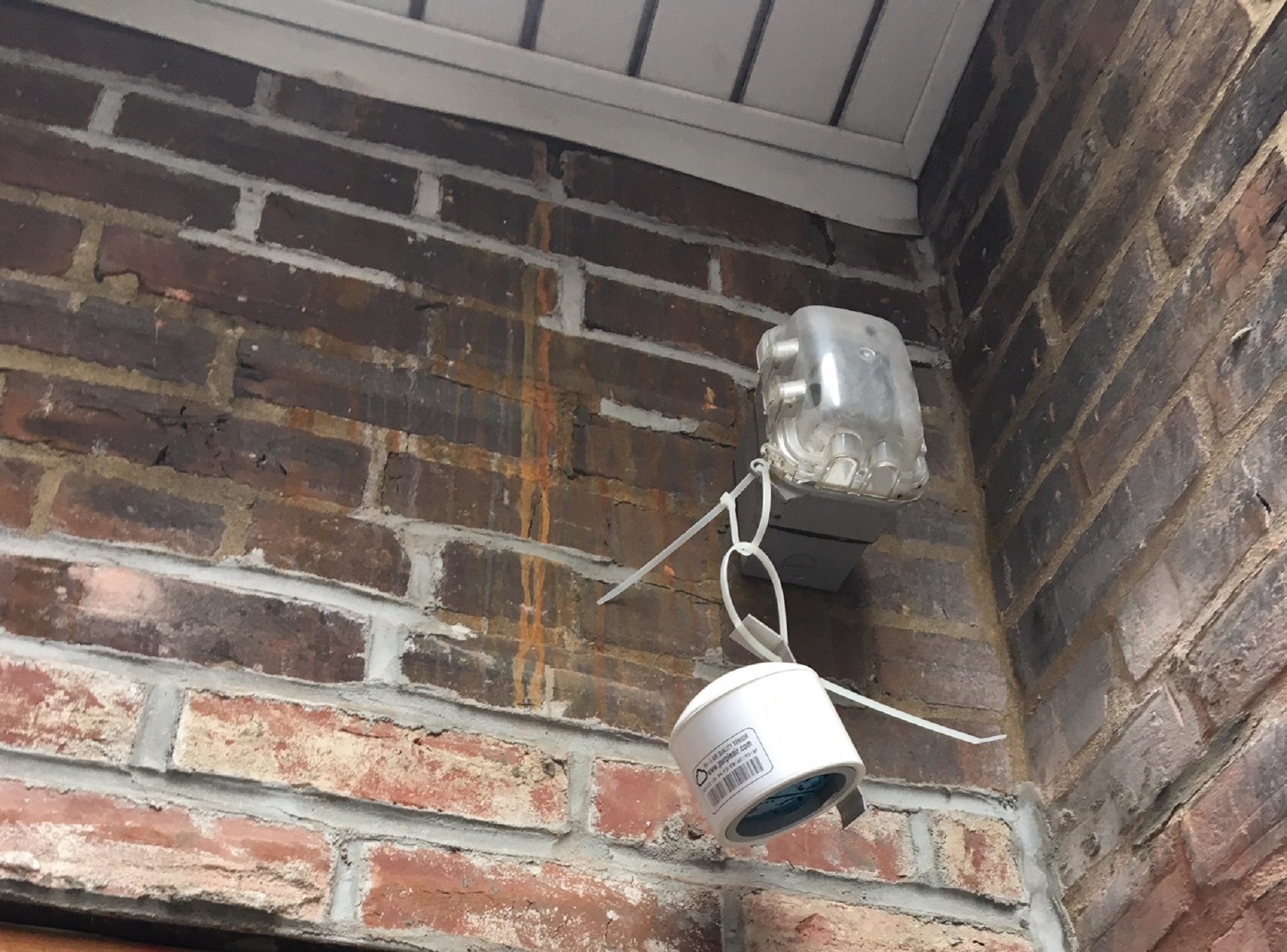 The Clean Air Council installed this PurpleAir-brand monitor at the River Wards Cafe in Port Richmond.

When the PES refinery exploded last June, people saw a thick black plume of smoke coming out of it. Hydrocarbons and deadly hydrofluoric acid were released into the atmosphere and burned into a massive fire that lasted for 24 hours. The smoke dispersed into the air and traveled east, carrying fine particles of multiple pollutants through streets and homes in South Philadelphia and into South Jersey. 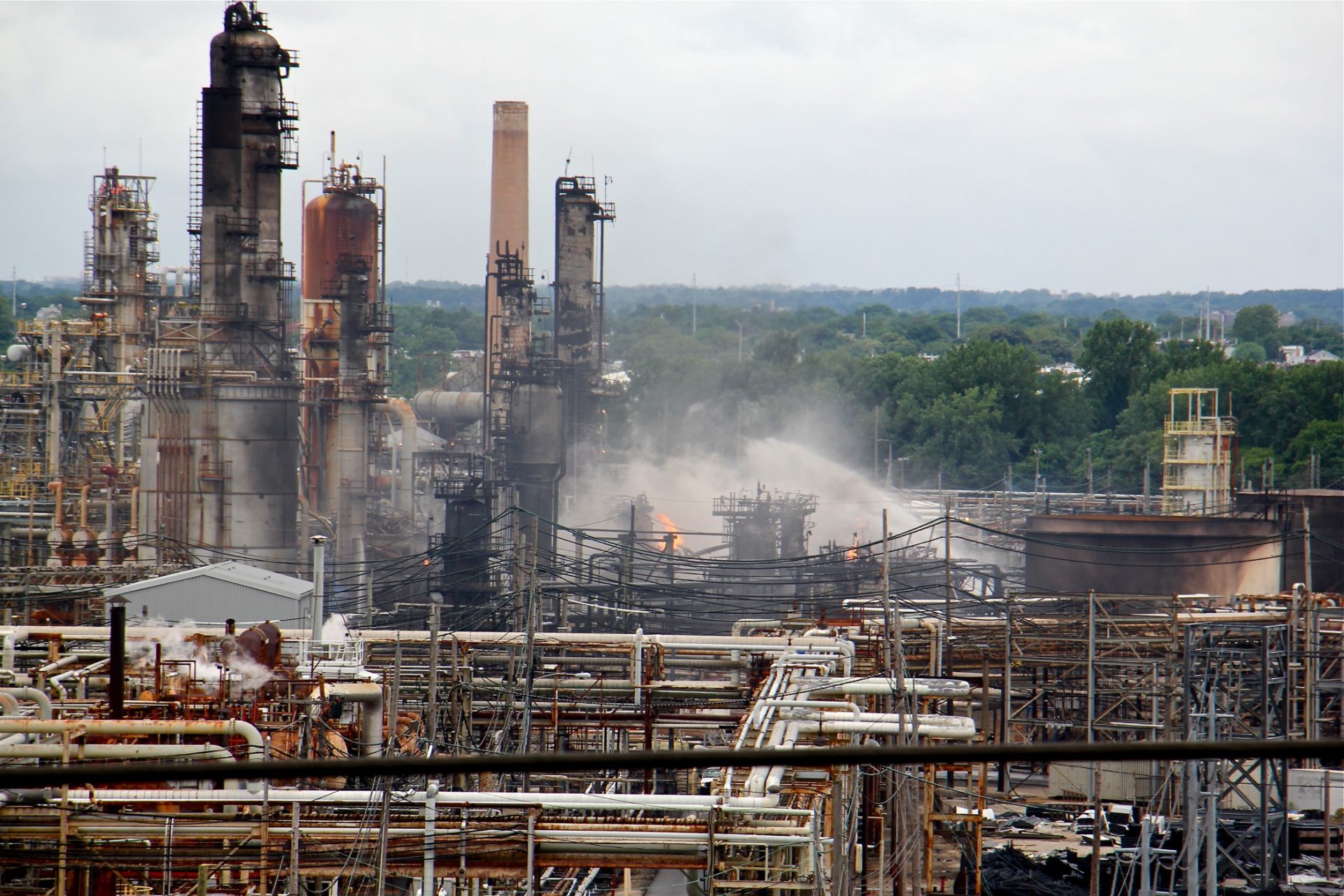 A fire burns at the Philadelphia Energy Solutions refinery hours after a series of early morning explosions at the 150-year-old industrial complex at 3100 W. Passyunk Ave.

Yet the city’s mandatory air monitoring network did not detect any increase in air pollution, during or after the fire. And city officials reported, mistakenly, that no hydrofluoric acid had escaped during the incident.

“If you’re not in the right place to measure them [pollutants], you’re not going to see them,”  DeCarlo said in an interview in October, addressing the fact that the plume went in a direction with no monitors.

In the days following the refinery fire, DeCarlo and other public health experts said the city didn’t have enough monitors to determine whether the air was safe to breathe.

“When the refinery fire happened, what it exposed was those regulatory requirements are not in place to cover these kinds of incidents,” DeCarlo said.

Health Commissioner Farley said the city didn’t check on the PAQS monitors after the refinery fire.

But last month, an investigation published by NBC News, E&E News, and the Investigative Reporting Workshop, using data from the Environmental Integrity Project, revealed that some of the 31 monitors owned by the refinery measured high levels of benzene. The monitors were located at the boundaries of the complex, not far from homes and businesses that were not notified about the emissions.

According to the city, the regulator-required monitor located in the neighborhood nearby did not detect abnormal levels.

Eric Schaeffer, a former EPA enforcement director and co-founder of the Environmental Integrity Project, said that a single monitor is not capable of predicting levels in a whole neighborhood.

“I don’t think there’s enough information from the city to support their statement that there just isn’t any risk or not enough of a risk, whatever that means,” Schaeffer said.

The Kenney administration seems to recognize the issue. In its final report, the city’s Refinery Advisory Group recommended improving air monitoring to “ensure that the City is better prepared to quickly identify hazards and protect people from them.”

But doing that would require adding to the city’s network real-time air monitors that can detect pollution in unpredicted, emergency situations, experts say. EPA-approved monitors can be pricey, but there are devices capable of detecting very small particles of pollution that can be purchased for about $250.

Federal regulation requires cities to assess their air monitoring networks once every five years. That’s when a city can argue that new monitoring sites or technologies are needed to monitor pollution and meet the regulation’s objectives, one of them being to “provide air pollution data to the general public in a timely manner.” The next such assessment is due in July.

Devices such as the popular PurpleAir particulate matter monitors are the size of a teacup and provide real-time pollution information that anyone with internet access can check any time. If Rodney Everett in Grays Ferry had one installed outside his home when the explosion at PES occurred, he would have known if the dark smoke sent any threats his way.

“Low-cost sensor networks would have at least given us some information about where that plume was going, information that we didn’t have on the day of the fire,” DeCarlo said.

Clean Air Council advocate Russell Zerbo has installed seven of those monitors in Kensington over the last two years. The data they’ve collected has allowed the nonprofit advocacy group to report construction sites for failing to control dust as regulations require and detect air pollution coming from auto shops. The monitors gave them the information needed to alert authorities of big emissions caused by accidents such as the scrapyard fire in Kensington in 2018.

Zerbo said a network like this near other polluters could help the city protect residents’ health.

“Getting general ambient air quality information does not protect public health. It gives you knowledge. But if you want to help enforcement, you need another network that is pointed at the large sources of pollution in the city,” he said.

Bumblebees are disappearing because of extreme heat