Firefighters and police are five times more likely than the overall population to develop PTSD and depression, yet only about 4 percent of departments have suicide prevention programs. 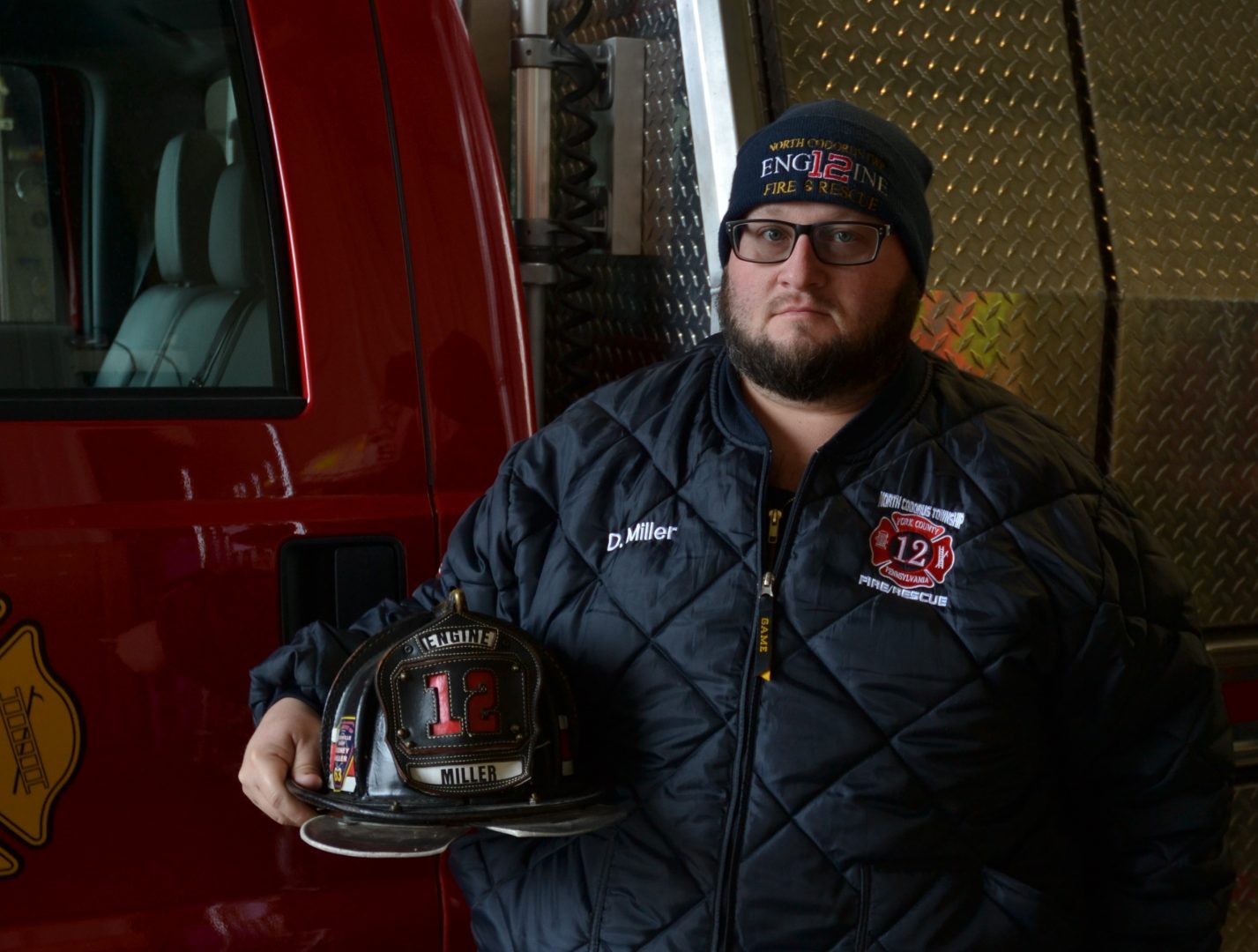 (North Codorus Township) — It’s been 20 years since volunteer firefighter David Miller was called to a car crash on a back road, but he can still take you to where it happened.

“The passenger of the vehicle was ejected, and it wasn’t a very pretty scene, especially for somebody that’s 18, to see a couple kids a couple years younger than you, laying there dead,” Miller said.

Horrific scenes at accidents and fires can be typical for volunteer firefighters, as many of Miller’s colleagues can attest.

Miller revisited that memory two years ago , after one of his fellow firefighters—18-year-old Chase Hartlaub—died in a similar crash.

Hartlaub, a firefighter at North Codorus and Dover fire stations, was a passenger in Michael Mendez’ 2012 BMW 328i.

Mendez was speeding when he crossed over the double-yellow line to pass another vehicle, blew past a stop sign and hit an SUV in Dover Township. 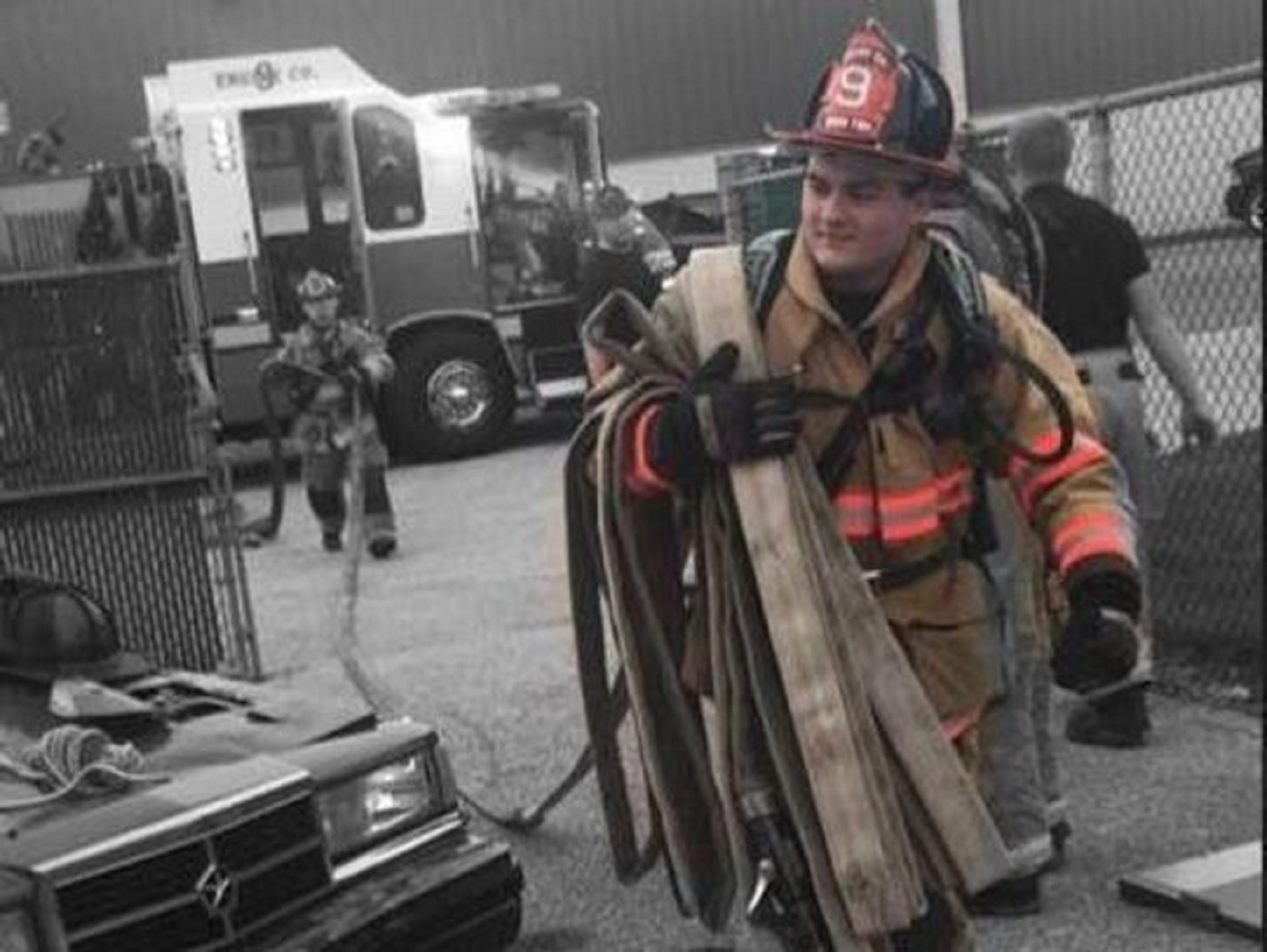 In this submitted photo, firefighter Chase Hartlaub is at work.

Mendez recently plead guilty of vehicular manslaughter in Hartlaub’s death. A story about the accident in the York Daily Record recounted how Hartlaub was a passenger in the front seat of the car, which veered off the road and struck a fence. Police said one of the fence posts impaled the windshield, striking the young firefighter.

Dover firefighters were the first on the scene, according to Chase’s mother, Wanda Hartlaub—who also has been a volunteer in the fire service since she was 14. Only when firefighters got Chase’s driver’s license out of his pocket did they realize who he was.

In the year-and-a half since his death, Wanda said she and her husband have been diagnosed with post traumatic stress disorder. She struggles to sleep, and they’ve both suffered from health complications.

She said she knows the firefighters who responded to the scene have also had a hard time coming to terms with what happened. That’s why she and her husband started the Firefighter Chase Hartlaub Memorial Foundation to promote mental health awareness among first responders.

The stakes are high: Police and firefighters are more likely to die by suicide than in the line of duty, according to a study commissioned by the Ruderman Foundation.

In 2017, there were at least 103 firefighter suicides and 140 police officer suicides. The study also found that as many as 40 percent of suicides among first responders may not be reported as such due to the stigma surrounding suicide. As a result, the real number may be higher.

Despite these numbers, only between 3 and 5 percent of police departments and fire stations have suicide prevention programs.

According to the U.S. Fire Administration. PTSD and depression rates among firefighters and police officers are nearly five times higher than the civilian population.

“Even when suicide doesn’t happen, untreated mental illness can lead to poor physical health and impaired decision-making,” the federal agency states on its website.

Mental health first aid training shows people how to recognize the signs of someone who is having a mental health crisis, said Jayne Miller, who teaches the classes at WellSPan Philhaven in Mt. Gretna, Lebanon County.

“One goal is to drive down the stigma and make it well known that the brain is an organ like the other organs in the body and it’s kind of unrealistic to think it’s gonna function at 100 percent our entire life,” Miller said.

That can be hard to do with some groups, where the culture may be to minimize or ignore mental health issues. Groups like first responders.

Miller says the course teaches people how to ask the right questions to start a conversation with someone who may be struggling.

In showing people how to help others, mental health first aid training also gives them better awareness to deal with their own challenges. That’s vitally important in environments where everyone wants to help others rather than take care of themselves, MIller said.

Hartlaub and her husband are working to get fire stations and police signed up for the courses. She said Dover Township— the fire station that responded to her son’s crash— isn’t on the list yet. But she’s optimistic that will change.