President Donald Trump enters the House floor where he will give his State of the Union address to a joint session of Congress in the House Chamber on Capitol Hill in Washington, Tuesday, Feb. 4, 2020.

“I wish they had called witnesses. I think it wasn’t a very fair trial. I’m disappointed.” 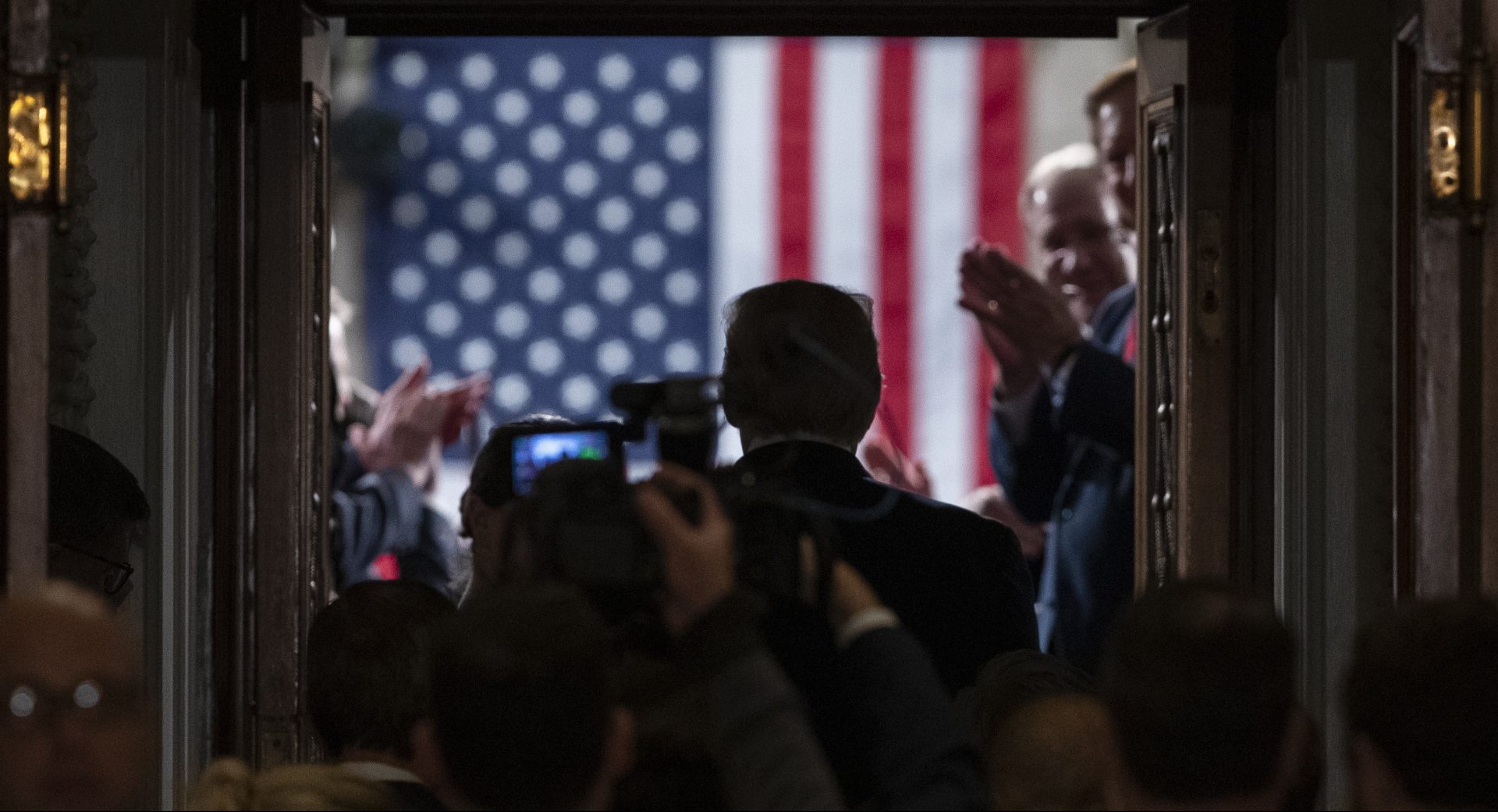 President Donald Trump enters the House floor where he will give his State of the Union address to a joint session of Congress in the House Chamber on Capitol Hill in Washington, Tuesday, Feb. 4, 2020.

(Philadelphia) — The U.S. Senate voted on Wednesday evening to acquit President Donald Trump of both charges levied against him. The verdict came five months after House Speaker Nancy Pelosi launched the formal impeachment inquiry, accusing the president of obstruction of justice and abuse of power.

On both counts, the vote split exactly along party lines, with one exception. Former GOP presidential nominee Sen. Mitt Romney was the sole dissenting Republican, voting to convict on the abuse of power charge. It would have taken 67 votes for conviction to remove Trump from office.

For many people in the Philadelphia region, the result was anything but shocking — but the 133-day proceeding may have influenced some voters.

“I knew it was coming,” said Karen Edwards, a 52-year-old resident of Delaware County. “I wish they had called witnesses. I think it wasn’t a very fair trial. I’m disappointed.”

Edwards is not registered with either major party, and is proud of the fact that she doesn’t align herself with a candidate based on party affiliation alone. But after she saw Senate Republicans deny witnesses and evidence from the floor of the impeachment trial — and consequently absolve Trump of any wrongdoing — she’s certain she’ll vote Democratic in the 2020 election.

“It’s a shame,” Edwards added. “It was a circus. I’m embarrassed for our country.” Sen. Lamar Alexander, R-Tenn., arrives for the impeachment trial of President Trump at the Capitol on Friday. Alexander, a key vote in the trial, says he plans to vote no on hearing witnesses.

She’s not the only one. Philly native Wydell Dyches also says he’s an independent, but said that once he got a push notification informing him of Trump’s official acquittal, he’s leaning to the left.

If nothing else, Dyches hopes the impeachment trial will convince Americans that the 45th president isn’t trustworthy enough to elect to a second term.

Eddie Worthy, who lives in Philly’s Queen Village neighborhood and said he’s usually a political centrist, is feeling the opposite. He’s relieved to see Trump acquitted — the charges didn’t seem like that big of a deal to him.

“I didn’t feel there was enough evidence to impeach him,” said 40-year-old Worthy. “I’m willing to bet that it’s not the first time there has been a little using [of American] influence to say, ‘Hey, we’re not telling you what to do but it may be in your best interest to look into this.’” Sen. Mitt Romney, R-Utah, speaks to reporters as he arrives at the Capitol in Washington, Monday, Jan. 27, 2020, during the impeachment trial of President Donald Trump on charges of abuse of power and obstruction of Congress.

Worthy said he voted twice for Obama — and this November, he plans to vote for Trump a second time, too.

Results aside, the impeachment looked like one big spectacle to Geno Hartley, of Norristown. A lifelong independent, he thought Democrats and Republicans were “parading on both sides,” which only confirmed how he felt before: “That there’s a lot of wasted time and grandstanding in politics.”

The 32-year-old couldn’t help but think it made Democrats look “a little stupid.”

“They were very certain of themselves that not only was the president going to be impeached but he was going to be thrown out of office,” Hartley said. “I think it did a lot of damage to the Democratic Party.”

What happens next? After being cooped up in impeachment proceedings for weeks, senators are making a break for it. Normally there would be a Thursday vote on legislation, but since the elected officials were occupied with impeachment, there’s nothing ready for a floor vote.

In the meantime, many senators have already left D.C. to take a long weekend before getting back to legislative business next week.

“Today, the Senate turned its back on our Constitution and the rule of law,” said Delaware County U.S. Rep. Mary Gay Scanlon in a statement. “I am disheartened and scared of what this president will do knowing that, with few exceptions, the Republican Party is unwilling to challenge his misconduct.”

Sen. Pat Toomey, the Pennsylvania Republican who had briefly considered a compromise to call witnesses, said that while he didn’t approve of everything Trump did, he didn’t feel the actions reached the level of conviction.

“While some of President Trump’s actions were inappropriate,” Toomey said in a statement, “they did not come close to meeting the very high bar required to justify overturning the last election.”

Meanwhile, the Democratic Party is still settling on the candidate who will face off against Trump in the November election. The Pennsylvania primary is set for April 28. If you want to hit the polls that day, make sure you’re registered by April 13.