FILE PHOTO: Gov. Wolf steps away from the podium at the end of a news conference at Caln Elementary School Wednesday, Feb. 11, 2015, in Thorndale, Pa. 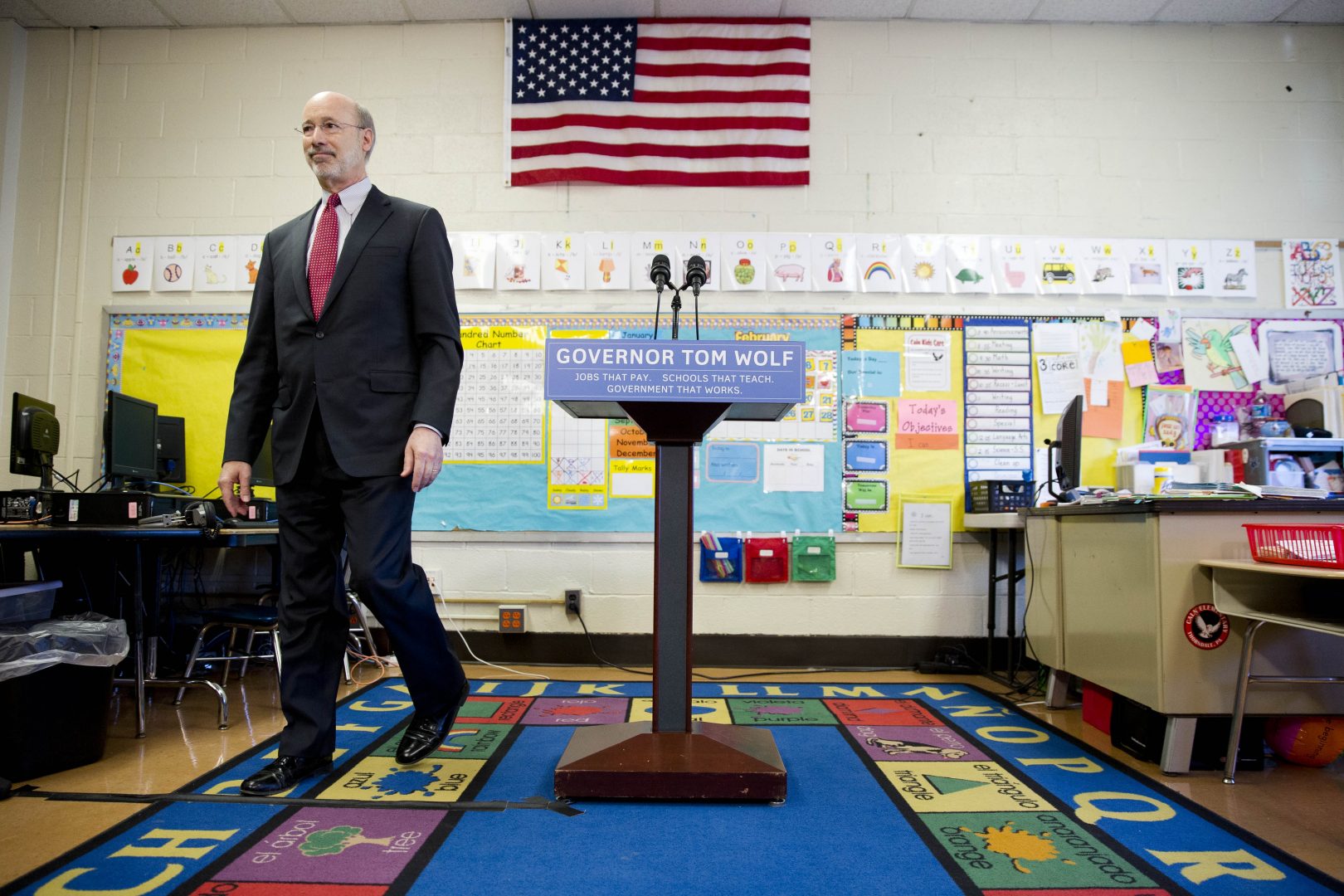 FILE PHOTO: Gov. Wolf steps away from the podium at the end of a news conference at Caln Elementary School Wednesday, Feb. 11, 2015, in Thorndale, Pa.

(Harrisburg) — In the annual state budget address, Pennsylvania Gov. Tom Wolf hit many of the education talking points he’s covered in previous addresses: more funding for public schools, a push for universal kindergarten and expanded pre-K, to name a few.

But there was one education issue atop the governor’s agenda, an issue Wolf has sidestepped in prior speeches: charter schools.

In his previous five budget talks, Wolf hadn’t even uttered those words — despite 20 years of debate over how the state should fund and oversee this growing part of Pennsylvania’s public-school profile.

That changed Tuesday, when Wolf laid out a plan that would reduce the amount of money school districts must pay when one of their students decide to attend a charter school. The proposal would save traditional school districts approximately $280 million annually, according to Wolf.

The governor didn’t mince words in his budget address. He said some charter schools were “little more than fronts for private management companies, and the only innovations they’re coming up with involve finding new ways to take money out of the pockets of property taxpayers.”

“Our charter school system is in desperate need of reform,” Wolf added. “It’s time to close the loopholes. It’s time to establish real standards, and it’s time to level the playing field.”

Over the summer, Wolf laid out a charter-reform agenda that included caps on charter enrollment and other measures that the charter-school community has long opposed, including changes to how charters are funded for special education.

The governor’s increasingly aggressive posture on charter schools comes as House Speaker Mike Turzai (R-Allegheny) — a staunch charter-school advocate — announces he won’t seek re-election. It’s not yet clear when Turzai will relinquish his role as speaker.

Charter-school advocates are fuming, characterizing the plan as a shot at charter schools with high special-ed populations.

“This proposal from the governor is a heartbreaking attack,” said Amy Hollister, CEO of Philadelphia’s Northwood Academy Charter School in a statement. “Slashing funds for our most vulnerable students to appease the power brokers is never an effective, ethical or equitable plan.”

But Republican leadership struck a less aggressive tone after the Governor’s speech. While they disputed that the plan would result in real cost savings for school districts, leaders didn’t rule out the possibility of a compromise on charter funding.

“We will continue to work — as we have over the last couple of years — with [Governor Wolf] on charter school reform,” said Senate Majority Leader Jake Corman (R-Centre). “We think that’s a very important issue.”

They include a plan to raise the state’s minimum teaching salary from $18,500 to $45,000 — a move that would affect roughly 3,000 teachers, mostly in rural school districts.

And, as he’s done in every year of his governorship, Wolf will ask the Legislature to budget more money for K-12 public schools.

His administration wants the state to spend $100 million more than it did last year on basic education and $25 million extra on special education. Compared to Wolf’s precedent, those are modest requests. Last year he asked for double in both categories.

Under the governor’s plan, all school districts offering half-day programs would have to instead offer a free, full-day option. Districts can, however, apply for a “hardship waiver” if they can prove there are legitimate capacity issues that prevent them from immediately establishing a full-day option.

It’s unclear how much this proposal would cost the 72 districts who do not yet offer full-day kindergarten.

Republican leaders didn’t immediately dismiss the idea of universal, full-day Kindergarten, but they did ask for details.

“We need to get into the weeds on this,” he said.

The move to universal, full-day kindergarten comes one year after the administration unsuccessfully lobbied to lower the compulsory education age in Pennsylvania from eight to six. Wolf will not wage that fight again this year, it appears.

Elsewhere on the early education front, Wolf is seeking $30 million in new money for pre-K programs. Most of that money — $25 million — will go toward the state-run Pre-K Counts program.

The first is a tweak to the way charter-school funding works for special education students.

Right now, school districts make a flat-fee tuition payment each time a special education student leaves for a charter. That flat fee is specific to each school district, but is calculated based on the assumption that 16% of all students in a given school district need special-education services.

And the fee does not fluctuate based on the actual services needed by a given special-education student, leading to accusations that some charters target special-education students with lower-cost needs so that they can use the excess money elsewhere in their budgets. Overall, one study found, charters tend to enroll disproportionately more students with disabilities, such as speech-impairment, and fewer with more costly disabilities, such as autism and emotional disturbance.

Wolf’s proposal — based on recommendations made by a commission that studied special-education funding in traditional school districts — would group students into one of four brackets, based roughly on how much it costs to educate students with their kinds of disabilities. This system, Wolf said in his budget summary, would “better align Special Education Funding with actual costs of providing services.”

But charter advocates say this move is a cash-grab by school districts who’ve lost students to charters and see them as a fiscal threat. And they believe this proposal will especially hurt schools that serve the most vulnerable students.

“The governor’s actions today show that this ‘reform’ plan is only to appease his political allies, who want nothing more than see charter schools close and reinstate school districts’ monopoly on public education,” said Ana Meyers, who heads the Pennsylvania Coalition of Public Charter Schools.

School districts pay a tuition fee each time a student living within their boundaries goes to a cyber charter school. That fee is based on the amount of money a district spends on its own students.

As he has in previous years, Wolf wants to establish a flat rate of $9,500 per student, regardless of where that student lives. It’s a proposal rooted in the notion that payments made to cyber charter schools far outpace the actual cost of educating students — an idea championed by many school-district administrators.

Cyber charters have come under heavy scrutiny recently for poor test scores and a perception that they’re sucking dollars out of traditional school districts.

Wolf did propose an education budget cut that may draw the ire of Republican lawmakers. He’s recommending the state pare down a recently introduced program that doles out school-safety grants to districts and charter schools.

The governor wants to take the $60 million in the School Safety and Security Fund and slash it to $15 million. Administration officials say that the initial investment — which came after the school shooting in Parkland, Florida — was mostly for new safety hardware. After two rounds of funding, Wolf’s staff believes districts can now pick up the tab for their own upgrades.

Although it’s not a direct budget item, Wolf on Tuesday reiterated his call for the state to borrow $1 billion to remediate lead, asbestos and mold in public schools. Wolf wants to expand a state-run grant program called the Redevelopment Assistance Capital Program to generate this infusion of cash.

The governor says it would be politically impractical to budget the amount of money necessary to remove toxins from the state’s public schools.

“No parent wants to hear that there just wasn’t room in the budget to make sure her child is breathing clean air or drinking clean water,” said Wolf. “That’s why it’s time to stop playing numbers games with our children. Instead of chipping away at this problem bit by bit, let’s make 2020 the year we act decisively to repair our school infrastructure.”

“We’ve made some key steps in getting Pennsylvania’s debt under control,” said Rep. Stan Saylor (R-York), chair of the House Appropriations Committee.

“It’s easy just to put things on credit cards and then ask other people in the future to pay for it,” Saylor added. “That’s not a solution for Pennsylvania.”