A letter written by Ashley Via Menser and given to PA Post by her mother. Menser was diagnosed with cancer and was set to get a hysterectomy, but was sentenced to jail.

Her parents said she had a month to live. The judge put their daughter in jail anyway

A woman fighting cancer pleaded guilty to stealing $100 worth of merchandise. Now she’s in jail and not getting treatment 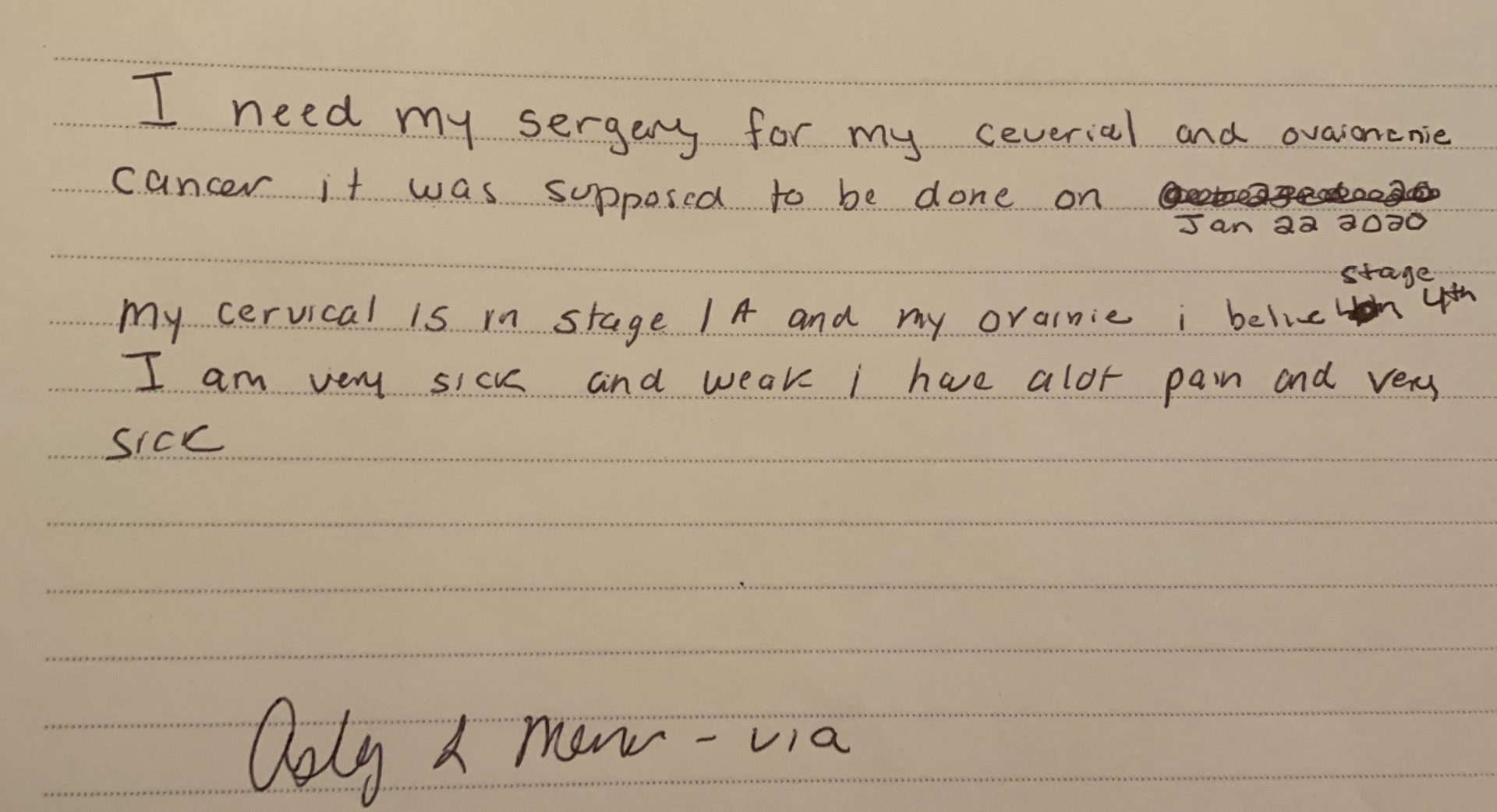 A letter written by Ashley Via Menser and given to PA Post by her mother. Menser was diagnosed with cancer and was set to get a hysterectomy, but was sentenced to jail.

A 36-year-old woman diagnosed with advanced-stage ovarian cancer was sentenced by a Lebanon County Judge last week to serve up to seven years in prison. The sentence was handed down hours before the woman was scheduled for an oncology appointment, and the woman’s family says the Lebanon County jail has so far failed to provide the medical attention needed to address her dire prognosis.

Last year, Ashley Via Menser pleaded guilty to shoplifting $109.63 worth of merchandise from a Weis Markets in 2018, court records show. On Jan. 22, Menser was in court for sentencing, hopeful that the fact she was being treated for ovarian and cervical cancer would persuade the judge to delay or defer sentencing.

Menser and her family were so confident she would be allowed to leave the courtroom that they had scheduled an oncology appointment for later in the day where they expected Menser to be scheduled for a hysterectomy to remove the cancer that had spread to her lymph nodes.

But Judge Samuel A. Kline proceeded with sentencing, handing down a 10 month to seven year prison term.

“I sat there and sat there and was like, ‘No, this can’t happen’,” Steve Via, Menser’s father, said. “She must have this operation or she’s going to die.

A review of medical documents provided to PA Post shows that Menser was diagnosed with cancer in 2011 and was being actively treated. An appointment receipt confirms that she was due at the Hershey Medical Center’s Cancer Institute later in the morning of Jan. 22. The records also show that Menser has a history of drug abuse and post traumatic stress disorder, for which she was taking medication.

Prior to Jan. 22, Menser and her mother, Stephanie Bashore, met with a doctor who explained to them that without treatment, Menser likely would be dead within a month.

“She has no choice, it’s life or death,” Bashore said. “The doctors sat there and told us this.” 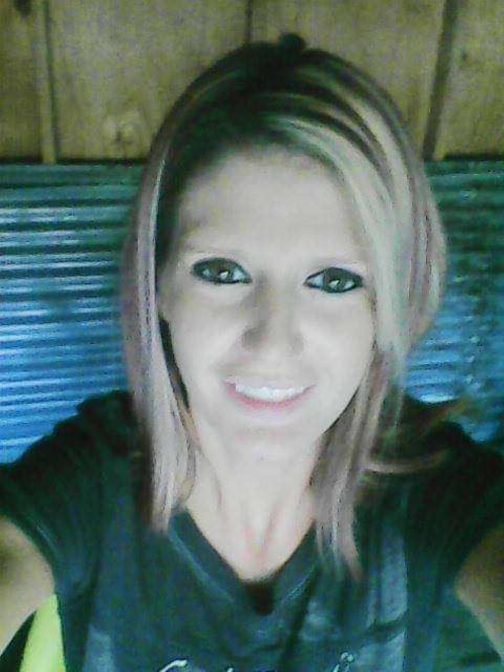 Ashley Via Menser was diagnosed with ovarian cancer in 2011. She pleaded guilty to a theft charge totaling more than $100, and was sentenced to serve up to 7 years in Lebanon County Correctional Facility.

Though her lawyer, Scott Feeman, said he was disappointed and put off by the judge’s decision, he agreed it was well within the judge’s power to proceed with sentencing. He added that the judge was sympathetic but made his decision based on Menser’s criminal history and not her current medical condition. Menser was convicted of theft in 2017 and also with drug possession and theft in early 2018.

“We gave the judge documents outlining our concerns with her confinement to a jail, and we had hoped that she would be able to stay home and get the treatment she needed for her cancer,” he said. He added that he would file a motion for resentencing.

Judge Kline, through his secretary, said he wouldn’t comment on the ruling.

Though sentencing guidelines allow judges to be more lenient or even divert certain defendants into treatment when they have a diagnosed mental illness, there has been little public attention – and even less research – on how judges handle sentencing when someone convicted of a crime is also terminally ill.

In Lebanon County, Feeman said, it’s been done on a case-by-case basis.

In the week since Menser was taken into custody, her parents say the corrections staff have neglected her cancer treatment. In a letter written by Menser on Wednesday night and obtained by PA Post Thursday morning, she stated her need for the surgery. “I am weak and in pain,” she wrote.

In an email, the county’s Chief Clerk Jamie Wolgemuth said that any policy dealing with terminally ill inmates would be set by PrimeCare, the private company that provides medical care to the jail’s inmates.

PA Post reached out to the company’s Chief Operations Officer Todd Haskins, but he didn’t respond to voicemails left at his work.

In Lebanon County Correctional Facility, where Menser is currently held, inmates must go through a preliminary screening process to determine if they need medical care. A 2012 department memo explains that only inmates experiencing dizziness, vomiting or “exhibiting” an active medical condition would be given immediate medical assistance.

But those policies changed after PrimeCare was brought in last year. Inmates can request to see a doctor, but the doctor is only available two days per week. The county’s contract with PrimeCare outlines that inmates with “pre-existing injuries or serious medical problems which cannot be treated appropriately in the facility environment may be diverted to an acute medical facility.”

The company landed a multi-million dollar contract with Lebanon within the last year. Previously, Lebanon staffed its own medical unit, but switched to PrimeCare after the correctional facility paid out $5 million in a wrongful death settlement involving a teen-aged inmate who died of complications related to drug withdrawal.

In 2016, the Bureau of Justice Statistics estimated that 22 percent of inmate deaths were cancer-related, but it’s unclear how many of those were pre-existing illnesses and not developed while in custody. In Pennsylvania, cancer is a leading cause of death for state prisoners. (Though, it should be noted that researchers point that cause to the prison population’s increased age.)

And though all prisoners are constitutionally guaranteed health care – including cancer treatment – by being wards of the state, it doesn’t assuage Menser’s parents fears that they might lose their child while she’s in jail.

“Ashley said she’s afraid she’s going to die in there,” Bashore said. “I just want to get her out and cared for.”

UPDATE: Since publishing, Pa. Lt. Gov. John Fetterman has called for Lebanon County Correctional Facility to release Menser for treatment. He said Judge Kline should, “err on the side of mercy.”

If the underlying details of this are accurate, this cannot be allowed to continue.

I’m sure @WeisMarkets doesn’t support this. I’ll personally pay the $109 back.

Calling on Judge Kline to err on the side of mercy. https://t.co/4N50n4aKPK

We will continue to update this story with any updates.

A previous version of this article misspelled the name of the store where Menser stole merchandise. It is spelled Weis, not Weiss. It also misstated her sentence as up to 10 months. In fact, her sentence is 10 months to 7 years. We apologize for the error.

We also updated this article to include more context to Judge Kline’s sentencing.

The Pa. agency that looks for wasteful spending wasted $160,000 on guns and ammo it can't use