Superintendents and other school leaders including Philadelphia Board of Education president Joyce Wilkerson hold a press conference in Norristown announcing a joint effort to seek charter reform. 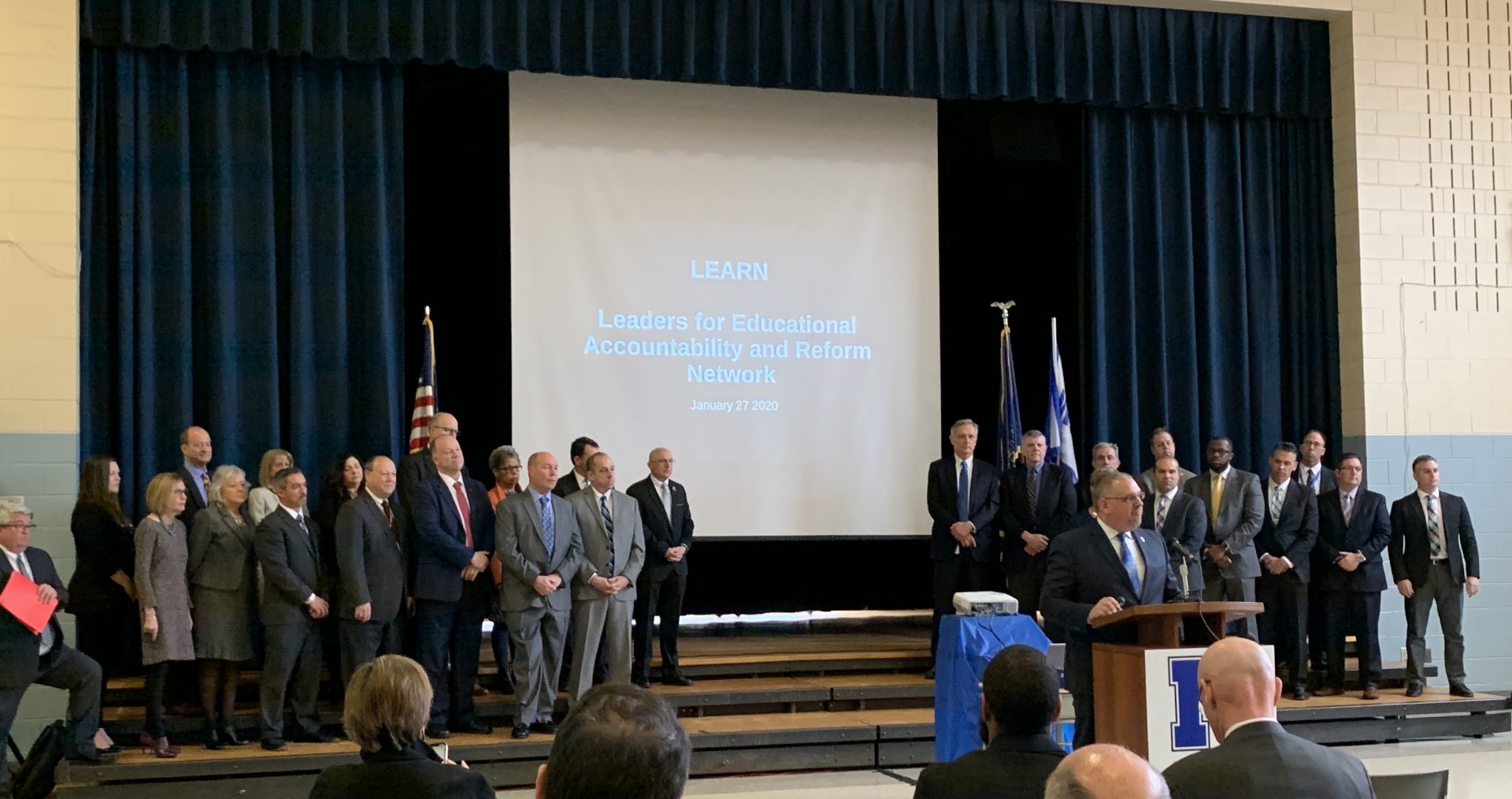 Superintendents and other school leaders including Philadelphia Board of Education president Joyce Wilkerson hold a press conference in Norristown announcing a joint effort to seek charter reform.

(Norristown) — In what they called an “unprecedented” coalition, more than 30 superintendents and other school district leaders in southeast Pennsylvania — joined by several from the center of the state — are calling for a moratorium on new charter schools and charter seats until Harrisburg thoroughly revamps the 23-year-old charter law.

They want to reform the formula for sending payments to these publicly-funded, privately-managed schools, and strengthen measures for holding the them accountable for financial integrity and academic success.

“It’s time that this happens … the charter school law is badly broken, and something has to change,” said Frank Gallagher, superintendent of the Souderton Area School District. “It simply cannot wait any longer.”

The push comes a week before Gov. Wolf, who has said he wants to reform the charter school law, gives his budget address to the legislature.

At a press conference held Monday at a Norristown elementary school, Gallagher and other school leaders repeated longstanding complaints about charters — how they are not required to have a fully certified staff and have “different rules” when it comes to providing health benefits to employees, for example. And they said that in 20 years, they have not fulfilled promises that they would be hubs for educational innovation and produce competition that would lead traditional schools to improve.

Instead, they said, charters have drained money from the district schools while avoiding transparency and accountability.

The superintendents detailed how “excess” payments to charters, especially for special education services, were draining their schools of needed services.

“Charter school costs are growing faster than our own district costs,” Gallagher said. “We are not against school choice, not at all, but we insist that we compete on a level playing field.”

The districts represented at the press conference span the five-county area from Quakertown in upper Bucks County to Avon Grove and Oxford in far south Chester County. Two are on the fringes — Bethlehem in Lehigh County and Ephrata in Lancaster.

Many of them never authorized charter schools in their districts, but nevertheless must pay when their students choose to attend one of the state-authorized cyber charters or charters in other school districts.

In Pennsylvania, only school districts can authorize bricks-and-mortar charter schools, but rejected charters can appeal to a state appeals board. The state authorizes cyber charters. Students don’t have to live in the authorizing district to attend a charter, and its home district is required to pay the tuition.

“We don’t have a single charter school within our district, yet 550 students attend charters in other districts or cybers,” said Christopher Dormer, the Norristown superintendent who hosted the event. Despite spending $9.5 million on tuition, the district’s elected board of education “has zero say in what happens in the education of those 550 students.” Norristown has an enrollment of 7,700.

“Not just an urban issue”

“This is not just an urban issue, this is an issue for all districts,” said James R. Scanlon, superintendent of the West Chester Area School District, which has 12,000 students. “Charter reform is the number one concern for school boards in Chester County, more than taxes.”

The superintendents chose National School Choice Week to announce the formation of what they are calling the Leaders for Educational Accountability and Reform Network, or LEARN. The timing and the substance of their argument drew an immediate rebuke from the state’s main charter school advocacy organization as a money grab and attack on parental choice.

“It is unfortunate that Pennsylvania’s school district leaders chose this week to attack public charter schools, rather than work with them to find solutions,” Meyers said in a statement. “Worse, they consistently attack charter school families for choosing to leave their schools.

“It’s clear to anyone paying attention that their political agenda is to put more money in their coffers, not help students seeking the best educational options available.”

The formation of LEARN comes as even some Republican legislators are becoming increasingly concerned about the poor academic performance of the state’s 15 cyber charter schools, with average graduation rates barely exceeding 50% and scores on state tests that consistently place them among the lowest-achieving schools in the Commonwealth. About 35,000 students are enrolled in the cyber charters in Pennsylvania, more than in all but two other states. Virtually all the state’s 500 districts pay for students to attend these schools, which receive more than $500 million in funds that would otherwise go to the districts.

State House Education Committee chair Curt Sonney, a Republican from the Erie area, has introduced legislation that would effectively shutter the cyber charters and require districts to operate their own online schools. He said at a hearing on the bill that he took the action due to “concerns from constituents related to the cost and accountability of cyber charter schools.”

Families choose cybers for reasons ranging from bullying to travel distance to professional commitments in the arts to religious belief. Many districts and county Intermediate Units have already been forming their own cyber schools — Philadelphia offers one — which they say they can operate at far less cost than the cyber charters, some of which are run by profit-making corporations. But many families say they want cyber charters, not simply online schools, because they don’t trust their local districts.

Philadelphia, which has half the charters in the state, sends 70,000 students, or one-third of its students, to 87 charter schools. Board of Education President Joyce Wilkerson represented the District at the press conference.

‘I am standing with my colleagues today calling for comprehensive legislative change to strengthen accountability, improve transparency, and ensure that every child attending a charter school has access to a high quality education.”

The superintendents complained about several provisions in the existing law, which has not been changed significantly since it was enacted in 1997.

The biggest one involves the funding formula, which is based on a school district’s per student spending and calculates different amounts for regular education and special education students.

Those calculations often result in special education reimbursements for charter schools that are more than three times the amount for regular education students, often exceeding $30,000 per student. The amount of the reimbursement is regardless of the severity of the student’s disability, and the charters are not required to spend the money on educating those students. And many don’t.

“We are paying these charters tens of thousands of dollars to educate these students when the costs of their services are tens of thousands less,” said Gallagher, explaining that many students require only speech therapy, which costs about $1,500 per student.

The superintendents want the legislature to adopt a formula that tiers the payments based on the cost of the services — as it does for traditional public schools — a policy change recommended by its own commission five years ago.

Scanlon, of West Chester, said that Collegium Charter School in Exton receives $14.9 million from five districts for special education, but on its annual financial statement only reported spending $4.5 million on special education. “Where did that money go?” Scanlon asked.

“At one time, charters were viewed as an urban problem, but that is no longer what you see,” he said. “The reality is that school districts across the Commonwealth are faced with an inequitable funding system exacerbated by a charter system that is unaccountable and unresponsive, and frankly, a legislature unwilling to address this change. This is not a partisan issue. Chairman Sunney, Democrats and Republicans, rural, urban and suburban, all recognize this challenge that we must deal with.”

He said he hoped that this year, legislators would “answer the call” due to the wider political support for change. “Those in leadership for too long have argued for fiscal responsibility on one hand, but when it came to charter schools and when it came to cyber charters were unwilling to make any changes to a law that continues to siphon money out of school districts that so desperately need them. It is our hope that this year will be different.”

In an interview afterward, Bradford said that charter funding reform has proven so difficult because it has run up against “moneyed interests that defend the status quo and believe public education should be a profit-making enterprise.”

He mentioned no names, but drew attention to an analysis of administrative spending of charter schools compared to districts. It shows that that districts top out at about 8% of spending on administration — as opposed to schools and classrooms — while several cyber and bricks-and-mortar charters range from 17 to 39 percent.

The highest is Chester Community Charter School in Chester-Upland, the largest bricks-and-mortar charter in the state, at 39 percent. CCCS enrolls more than half the elementary students in Chester Upland and also recruits students from elsewhere, including Philadelphia. Nearly 1,000 city students travel daily to the school, which posts mediocre test scores, sometimes spending more than an hour on buses each way.

CCCS is operated for profit by a company owned by Republican donor and power broker Vahan Gureghian.

Despite agreement that the formula and other parts of the law are out of date, a solution to this has been politically elusive. Charter schools complain that the regular education rate is only 75% of what district-run schools pay per student, a formula set by the legislature to account for expenditures charter schools don’t have — for instance, transportation, adult education, and mandated services to nonpublic school students. Nevertheless, they say the formula is discriminatory for that reason, and consider the special education reimbursements as a form of compensation for that.

With the announcement that House Speaker Mike Turzai plans not to run for re-election, Bradford and Rep. Steve McCarter said that it might be easier break the logjam. Turzai, a staunch advocate of school choice, has resisted charter reform.

McCarter, a former high school history teacher in Lower Merion who represents part of Montgomery County including Cheltenham, said he did not oppose school choice.

“It’s clear that charters have tapped a nerve with parents, ” he said. But, he added, it is important to have the transparency and accountability necessary to determine “if they are providing a better education.”