Billie Eilish accepts the award for record of the year for "Bad Guy" at the 62nd annual Grammy Awards on Sunday, Jan. 26, 2020, in Los Angeles.

The rush of awards came only at the tail end of a long, strange and emotionally ambivalent ceremony. 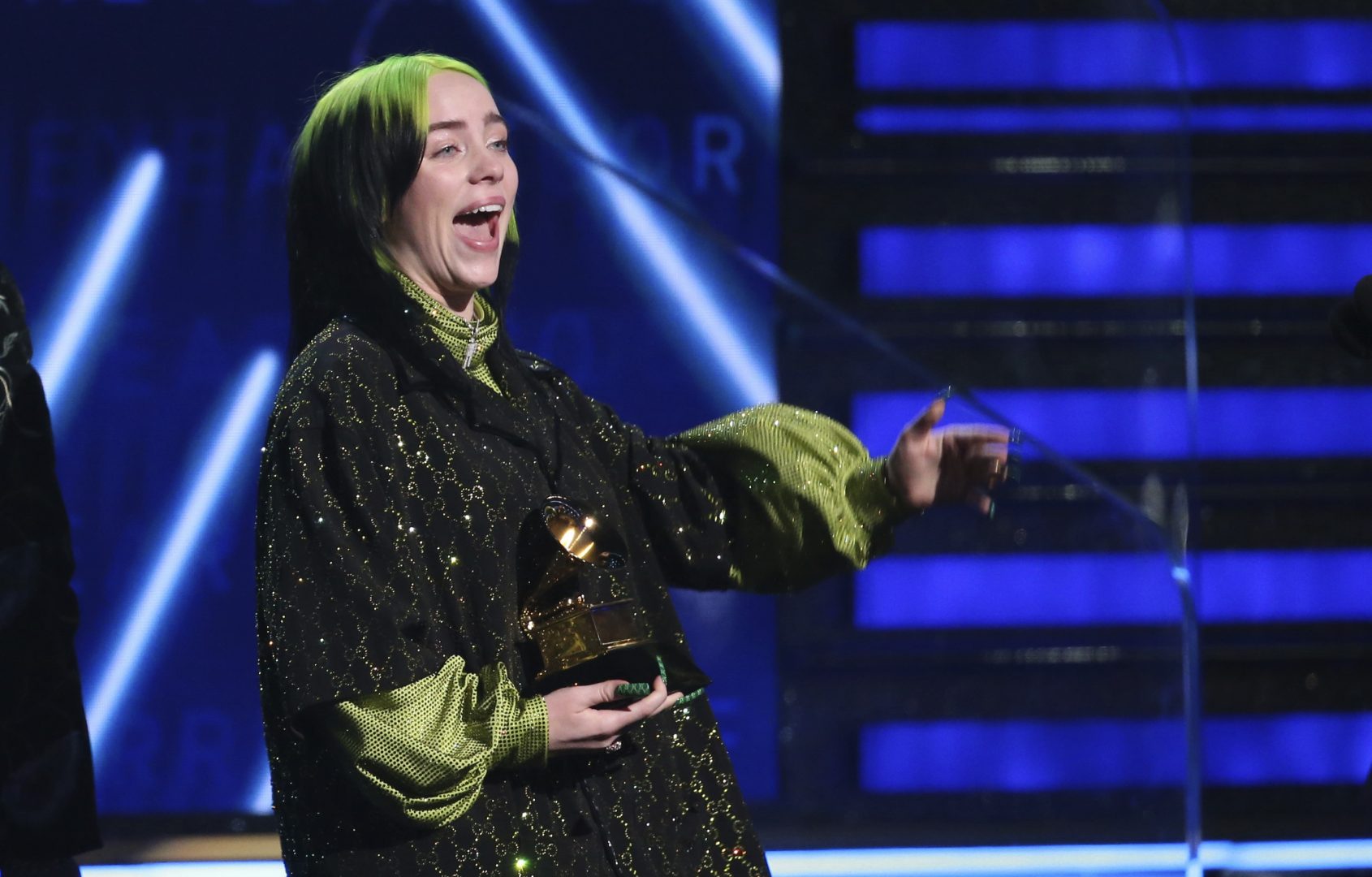 Billie Eilish accepts the award for record of the year for "Bad Guy" at the 62nd annual Grammy Awards on Sunday, Jan. 26, 2020, in Los Angeles.

(Los Angeles) — By the end of the 62nd Grammy Awards on Sunday evening, a major star had been crowned: 18-year-old singer Billie Eilish, who swept all four of the night’s biggest prizes — Best New Artist, Song of the Year, Record of the Year and Album of the Year — along with honors for Best Pop Vocal Album.

But that rush of awards came only at the tail end of a long, strange and emotionally ambivalent ceremony held Sunday night at the Staples Center in Los Angeles.

The evening was far from the fizzy, uplifting celebration that the music industry, and the Recording Academy, the organization that gives out the prizes, had anticipated just a few weeks ago. But the organizers of the ceremony seemed to still be pressing towards joy, no matter what.

The death of Los Angeles basketball legend Kobe Bryant in a helicopter crash just hours before the awards, coupled with an ongoing scandal within the Recording Academy that has rocked the music business, meant that this year’s televised ceremony was straining under a heavier load than usual — and the flames onstage during several of the live performances were nothing compared to the fire that the Academy is attempting to douse behind the scenes, which include explosive allegations, including sexual misconduct and financial and voting improprieties, levied by the organization’s recently suspended CEO, Deborah Dugan, who was placed on leave earlier this month.

In recent years, especially as major black musicians like Beyoncé and Kendrick Lamar have lost out in the top categories, the Grammys have become a target of critics arguing that the Academy was falling out of touch — or worse, using stars to boost ratings without acknowledging their art. If anything, the 2020 awards were supposed to be a celebration of younger talent — and most especially female and diverse artists, with serious contenders for major awards that also included Lizzo, Lil Nas X, Ariana Grande, H.E.R. and Lana Del Rey.

It initially felt as if Lizzo might carry the night, especially after a joyous, triumphant opening medley and an early win, for Best Pop Solo Performance. But Eilish pushed past, picking up five total Grammys, becoming the youngest-ever winner of the Album of the Year and Record of the Year prizes and the first female artist to sweep all “Big Four” categories. (She is only the second person ever to do so, after Christopher Cross in 1981.) 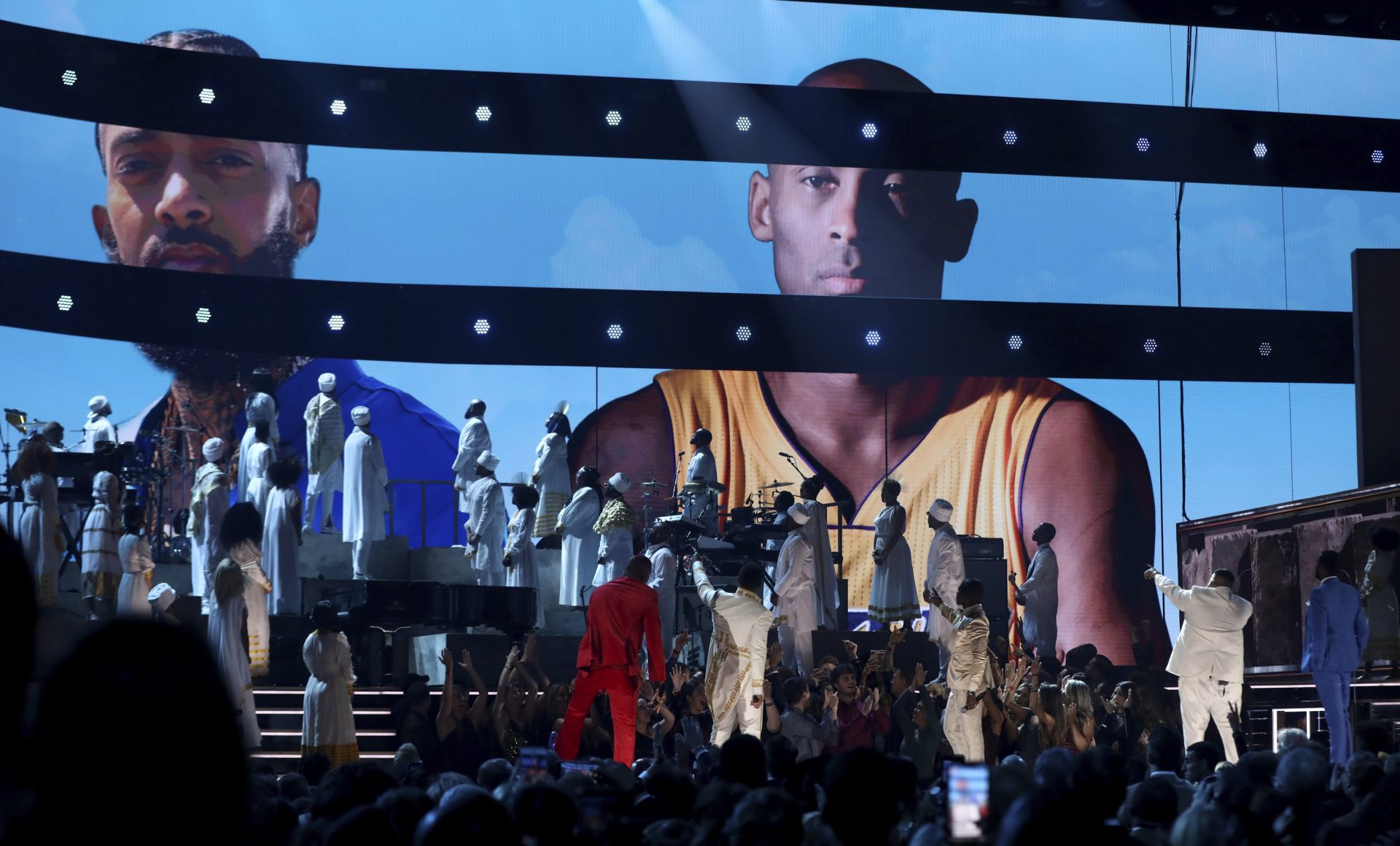 Throughout the proceedings, winners, presenters and even the evening’s host, Alicia Keys, made reference to the pall cast on the ceremony, which also included a musical tribute to the late L.A. rapper and philanthropist Nipsey Hussle, who was killed last April.

Despite the clouds hanging over the awards, Eilish and her brother and creative partner, Finneas O’Connell, who performed two of her songs together earlier during the ceremony, appeared genuinely starstruck when they began picking up trophies. (O’Connell also broke boundaries with another win on Sunday night: At age 22, he became the youngest-ever winner of the Producer of the Year, Non-Classical prize.)

The behind-the-scenes allegations roiling the Grammys are messy and complicated, and have grown more so on a nearly daily basis. 10 days ago, the president and CEO of the Recording Academy, Deborah Dugan — who was installed in August, and whose appointment as its first female chief was widely seen as a corrective for an institution struggling with perceptions that it was too male, too white, too old and too insular — was suspended for an accusation that she had bullied the executive assistant of her predecessor, Claudine Little.

Dugan claims that her suspension had nothing to do with the alleged bullying — which she has denied — but was in retaliation for a number of extremely serious accusations she made, some initially in a December memo she sent to the Academy’s HR department, and then reiterated and expanded in an Equal Employment Opportunity Commission discrimination complaint that was filed last Tuesday.

The EEOC complaint includes several bombshell accusations, including that Dugan’s predecessor, Neil Portnow, raped a female artist in New York; that Dugan was pressed to hire Portnow as a consultant for $750,000 by the Academy’s then-board chair, John Poppo; and that the Academy’s general counsel and former board chair, Joel Katz, sexually harassed Dugan in May 2019, as she was being courted for the top Academy job.

Both Portnow and Katz have denied Dugan’s allegations. 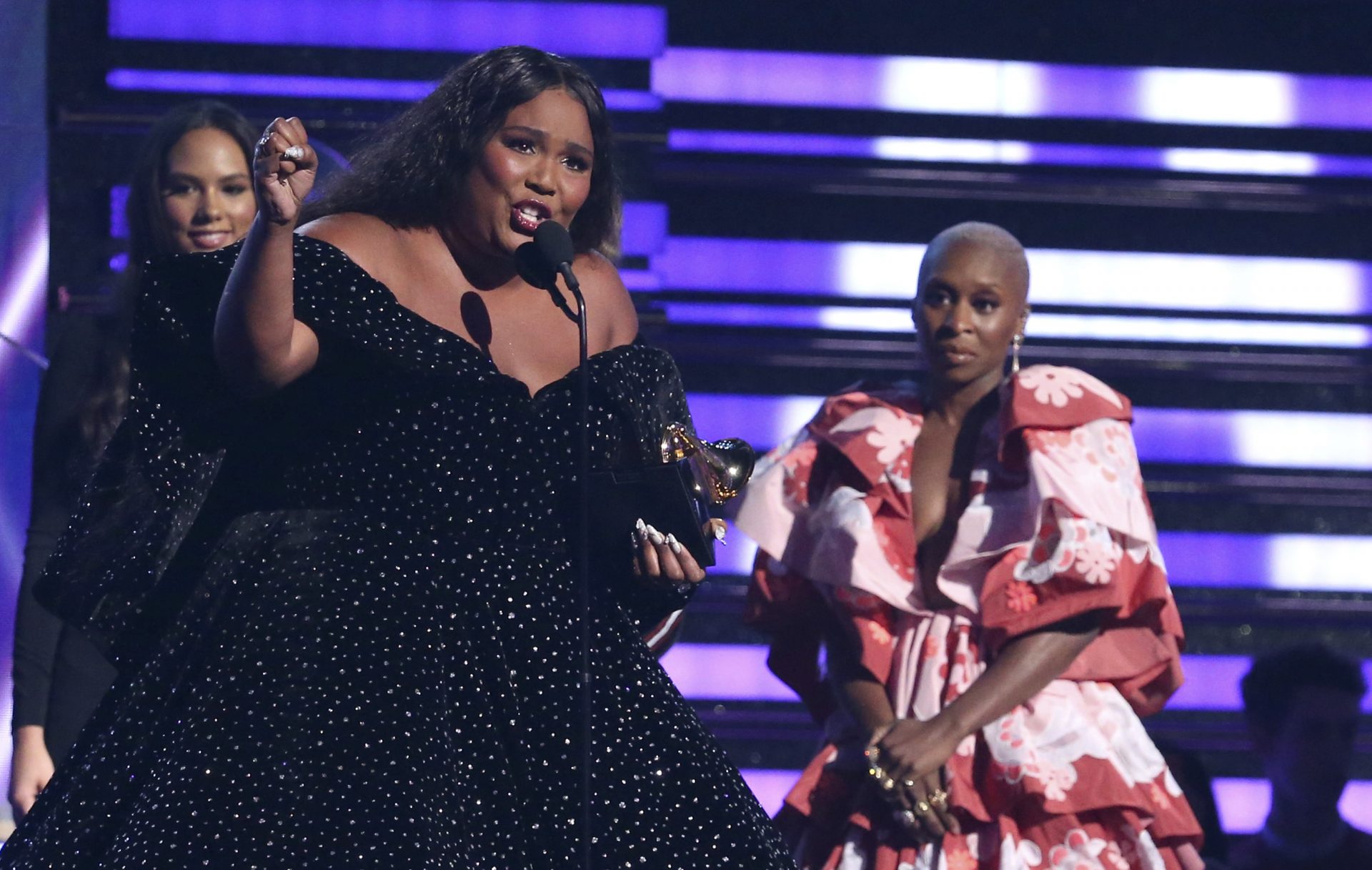 Lizzo accepts the award for best pop solo performance for “Truth Hurts” at the 62nd annual Grammy Awards on Sunday, Jan. 26, 2020, in Los Angeles. Looking on at right is Cynthia Erivo.

In the EEOC complaint, Dugan also alleged major financial self-dealing and improprieties at the Academy — a public, non-profit organization — as well as vote rigging for the awards themselves, and an unwillingess on the part of board members to act upon a number of urgent recommendations made by a diversity and inclusion task force, who released a report of their work in December. The Recording Academy denies those allegations.

In a statement released Sunday morning, the Academy’s board chair and interim leader, Harvey Mason Jr., said that the Academy will take up many of diversity goals immediately, including hiring a dedicated diversity and inclusion officer within the next 90 days. (In a counter-statement released hours later, Dugan’s lawyer, Douglas Wigdor, said in part: “If the past 10 days have shown anything, it is that the current Chair is not the appropriate individual to effectuate meaningful change at the Academy. This is the same Chair that put Ms. Dugan on leave because she was calling for increased diversity and the end to self-dealing and conflicts of interest.”)

About 20 minutes into the show, Keys lightly alluded to Dugan’s accusations, saying knowingly, “It’s been a hell of a week. Damn! This is a serious one.”

But Keys also equivocated, seeming to try to balance the honors bestowed at the awards with a genuine acknowledgment of the need for progress: “I’m proud to be here as an artist… It’s time for newness, and we refuse the negative energy,” she said early in the show. “We refuse the old systems. … We want to be respected and safe in our diversity. We want to be shifting to realness and inclusivity.”

Lizzo also acknowledged the odd tenor of the night while accepting the prize for Best Pop Solo Performance, during her only televised win of the night: “I realize there are people hurting right now … Let’s continue to reach out, hold each other down and lift each other up.” It was one of three wins for Lizzo; the others were for Best Urban Contemporary Album for Cuz I Love You and Best Traditional R&B Performance, for “Jerome.”

The Academy’s priority was likely always going to be to forge on in order to deliver a big show to a global audience, including what the organization likes to call “Grammy moments,” including Lil Nas X’s performance of “Old Town Road,” joined by BTS, Billy Ray Cyrus, Mason Ramsey and Diplo, as well as a feel-good reunion between Aerosmith and Run-DMC for “Walk This Way.”

Still, hard realities intervened, even for host Alicia Keys — an Academy stalwart who won five Grammys, including Best New Artist, at the 2002 awards. As she bade the audience good night, she said: “We got a lot to change. We got a lot to do.”