Pennsylvania Speaker of the House Mike Turzai announces at a news conference he will not run for another term as a Pennsylvania representative, Thursday, Jan. 23, 2020, in McCandless.

With Turzai departure, private and charter schools lose a major ally in the capital

His legacy on education policy boils down to two words: school choice.

The Allegheny County Republican — who announced Thursday he won’t seek re-election after eight years in top leadership roles in the House — influenced nearly every piece of education-related legislation during his tenure.

But when it came to sponsoring legislation or using the bully pulpit, Turzai — who was elected in 2001, became majority leader in 2012 and speaker in 2015 — often circled back to policy ideas favored by school-choice advocates.

Turzai, 60, leveraged his power over the state’s purse strings to seed charter expansion in urban school districts. And he repeatedly pushed to expand a tax-credit program that steers donations toward private schools. 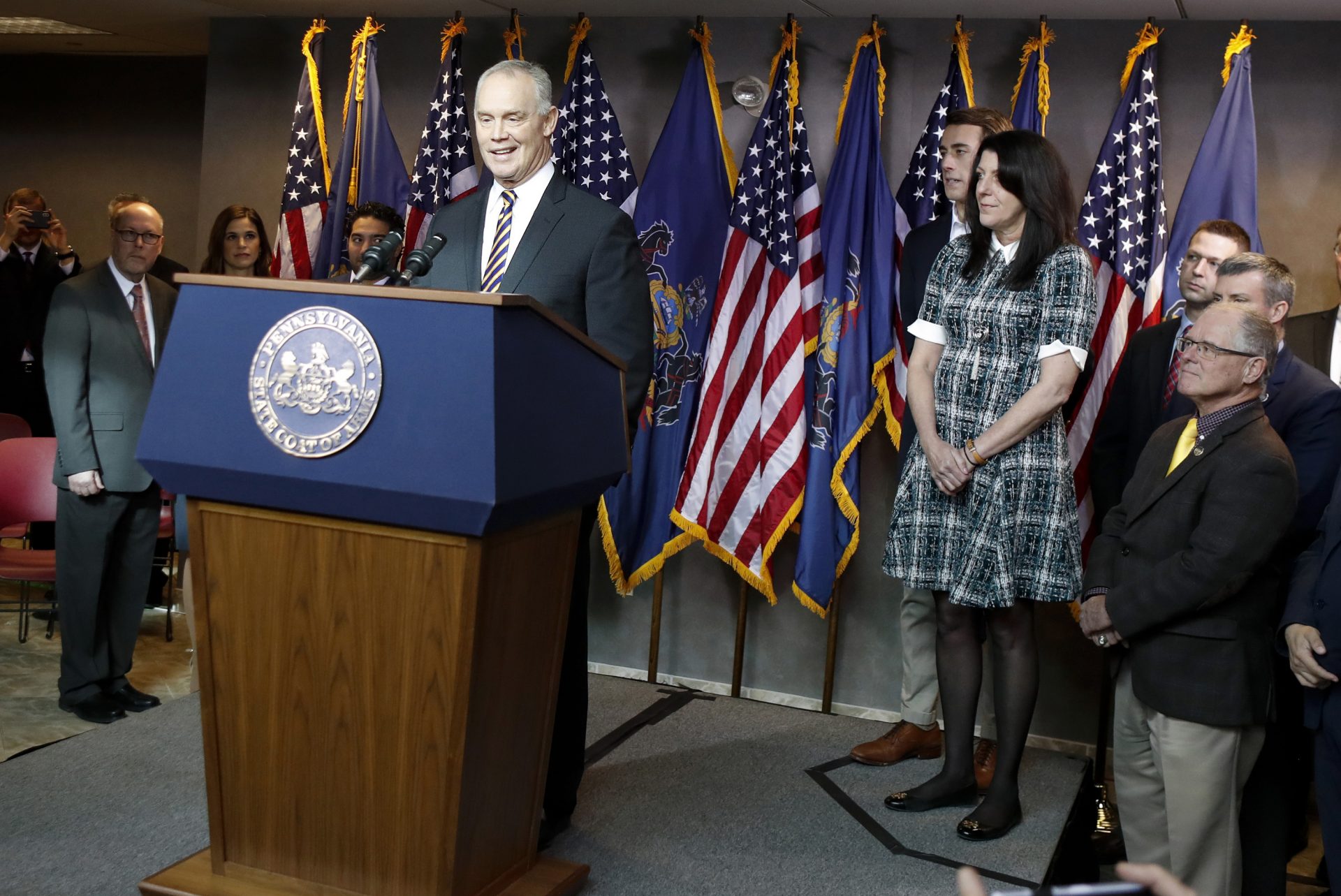 Pennsylvania Speaker of the House, Mike Turzai, left, stands the podium beside his wife Lydia, center right, and one of his sons, Matt, center, as he announces at a news conference he will not run for another term as a Pennsylvania Representative, Thursday, Jan. 23, 2020, in McCandless, Pa. (AP Photo/Keith Srakocic)

But Turzai didn’t simply give those principles lip service. He prioritized charter- and private-school expansion, at times digging into local conflicts if they presented an opportunity to talk about, or push for, alternatives to traditional public schools.

“This was his passion way before he was speaker,” said former State Rep. John Taylor, who was a key Republican voice from the Philadelphia delegation during much of Turzai’s tenure in leadership. “I think his passion was finding an escape route for any child in an under-performing or failing school. I think that guided him on every other decision.”

Even Turzai’s critics agree that the retiring speaker focused more on education — and specifically school choice — than others in his caucus. For a lawmaker representing an affluent district in the Pittsburgh suburbs, Turzai took an unusual interest in education debates that mostly impacted urban school systems.

“Mike Turzai has been much more of a bulldog in favor of funds for private schools, religious education, charter schools and cyber charter schools than his predecessors,” said Donna Cooper, executive director of the nonprofit Public Citizens for Children and Youth and a former education advisor to Democratic Gov. Ed Rendell.

But Cooper felt Turzai’s focus on choice came at the expense of investment, drawing money out of traditional school districts in a way that undermined their stability.

“He wanted to hold people accountable without the resources,” Cooper said. “I think it’s a sorry track record.”

Regardless of interpretation, however, it is a fairly consistent track record.

Below we examine three telling moments in Turzai’s career in House leadership, and how they shaped education policy in the state. 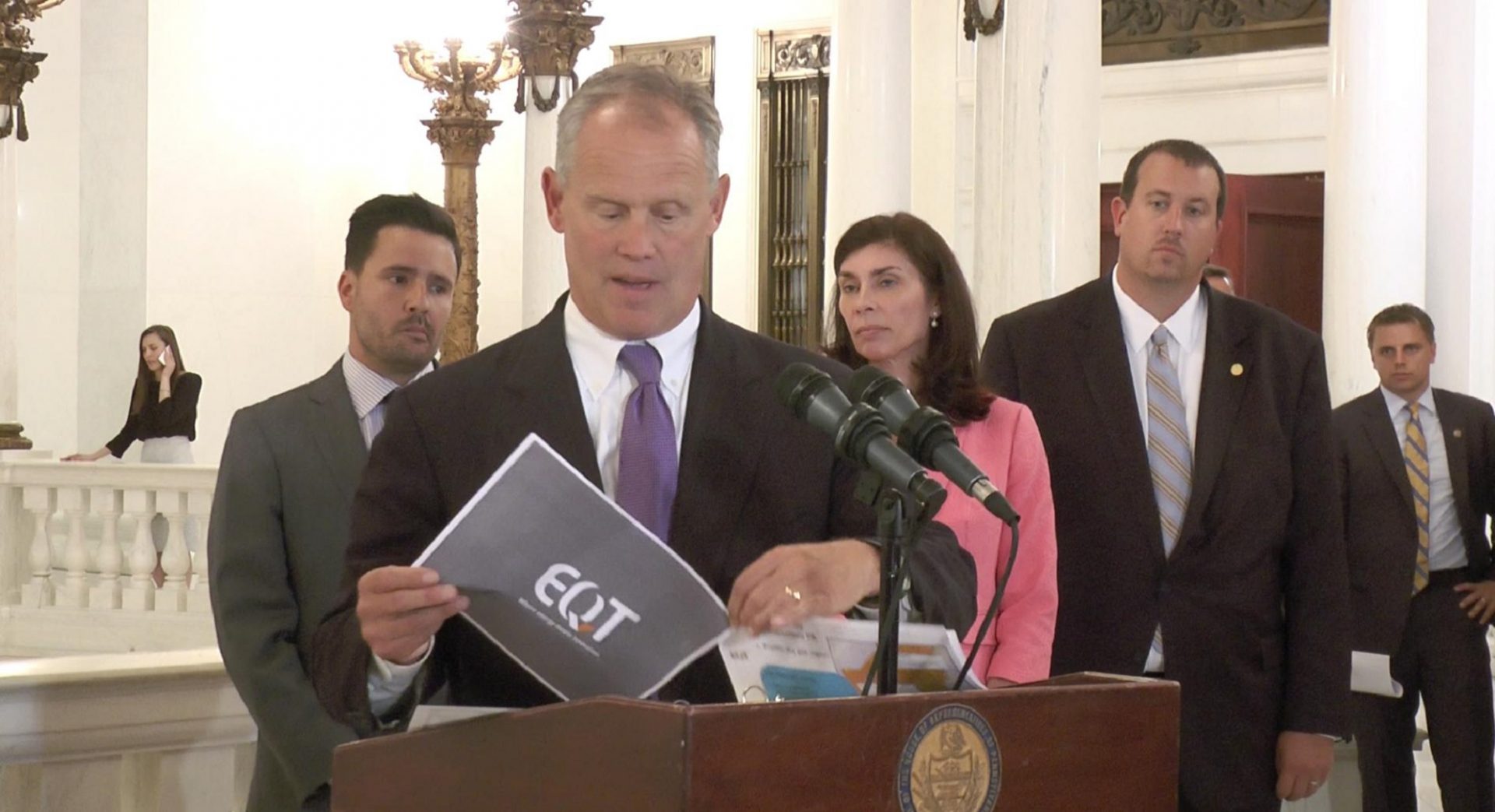 At a June 2015 press conference, GOP House Speaker Mike Turzai voiced his opposition to a severance tax while reading directly from a booklet of talking points prepared by EQT, a major drilling company near his home district in southwestern Pa.

Turzai wasn’t yet speaker in 2014. But as house majority leader he played a critical role in a deal that allowed Philadelphia to tax tobacco and use the revenue to boost its cash-strapped school district.

It was a risky decision, recalled Taylor.

If Turzai’s support of the measure was telling, so too were concessions he extracted.

Turzai wanted the city’s moratorium lifted. In exchange for supporting the tax, Turzai attached an amendment authored by Taylor that made it so that charter applicants rejected by Philadelphia’s School Reform Commission had the right to appeal to a state board.

Soon after, Philadelphia began again accepting and approving charter applications. Today, there are about 75,000 Philadelphia students in charter schools, up from roughly 60,000 in the 2013-14 school year.

Whether you consider it meddling, dealmaking, or a principled crusade, Turzai repeatedly inserted himself in local education issues — especially in Philadelphia.

After the moratorium on charters ended, Turzai criticized the SRC for not approving enough of the backlogged charter-school applicants. In 2016, he got deep into the weeds, writing a public letter to district leaders regarding the proposed rejection of a single charter school application.

Turzai was the primary sponsor of a failed 2017 bill that would have compelled Philadelphia and Pittsburgh to grow the number of charter seats in each city by a specific amount every year.

And in 2015, shortly after becoming speaker, Turzai toyed with the idea that Philadelphia schools would get less funding because City Council blocked a proposal to privatize Philadelphia Gas Works.

Belmont Charter School lobbied for the innovation schools law and intends to apply for the designation.

One of Turzai’s top priorities in Harrisburg has been expanding a pair of tax-credit programs that incentivize donations to private schools.

The EITC (Educational Improvement Tax Credit) Program and the OSTC (Opportunity Scholarship Tax Credit) Program give tax breaks to businesses and individuals if they donate money for private-school scholarships. The idea, backers say, is to give students from poor- and middle-class backgrounds a better shot at attending private schools.

Turzai tried unsuccessfully in later years to pass a bill that would have allowed EITC and OSTC to grow automatically.

Though Democratic Gov. Tom Wolf stymied those efforts, Turzai still used the programs as a negotiating chip during budget season.

While Wolf stumped for increases to the state’s basic education budget, Turzai secured more money for the EITC and OSTC programs.

Turzai has left his imprint on some other major education-related policies during his time as speaker, including blocking a natural gas severance tax Wolf wanted to create to fund schools and the implementation of a new, statewide education funding formula. Other deals evaded him, including a long-elusive compromise on updating the state’s decades-old charter law.

A final stand in Harrisburg

The last education bill Turzai introduced is an almost perfect distillation of his approach and ideology.

The measure, which Turzai unveiled late last year, would implement a version of private school vouchers, but only in the city of Harrisburg. Any city family would receive a tuition grant — taken out of the state’s subsidy for Harrisburg schools — if they chose to attend a private school.

As he often did in Philadelphia, Turzai, through this final bill, homed in on a school district in distress. Harrisburg recently went into a state receivership program due to budgetary woes.

And on a global, ideological level, the bill highlights Turzai’s allegiance to school-choice principles and his commitment to giving families new pathways.

Recently, that allegiance was on full display when Turzai confronted two traditional-public-school advocates in Harrisburg — a confrontation that took place the same day he circulated a memo for his voucher bill.

While standing outside an event he attended alongside U.S. Secretary of Education Betsy DeVos, Turzai told the teachers who were there to protest that they were “special interest people,” which drew headlines.

But the line before that was perhaps more telling, at least in what it said about Turzai’s beliefs.

“You have to care about each child,” Turzai said, “not about the monopoly.”

Some accuse Turzai of being beholden to his own special interests — big-money donors who back charter and private schools. Others see ideological motives or a good-hearted interest in families.

Regardless of their origin, Turzai’s views and priorities were evident. As he steps aside, with stated interest in a private sector career — it remains to be seen whether the House GOP caucus will elect a successor that shares his passions and priorities.