Faith leaders pray with President Trump during a rally for evangelical supporters at the King Jesus International Ministry church in Miami earlier this month.

Trump to reinforce protections for prayer in schools 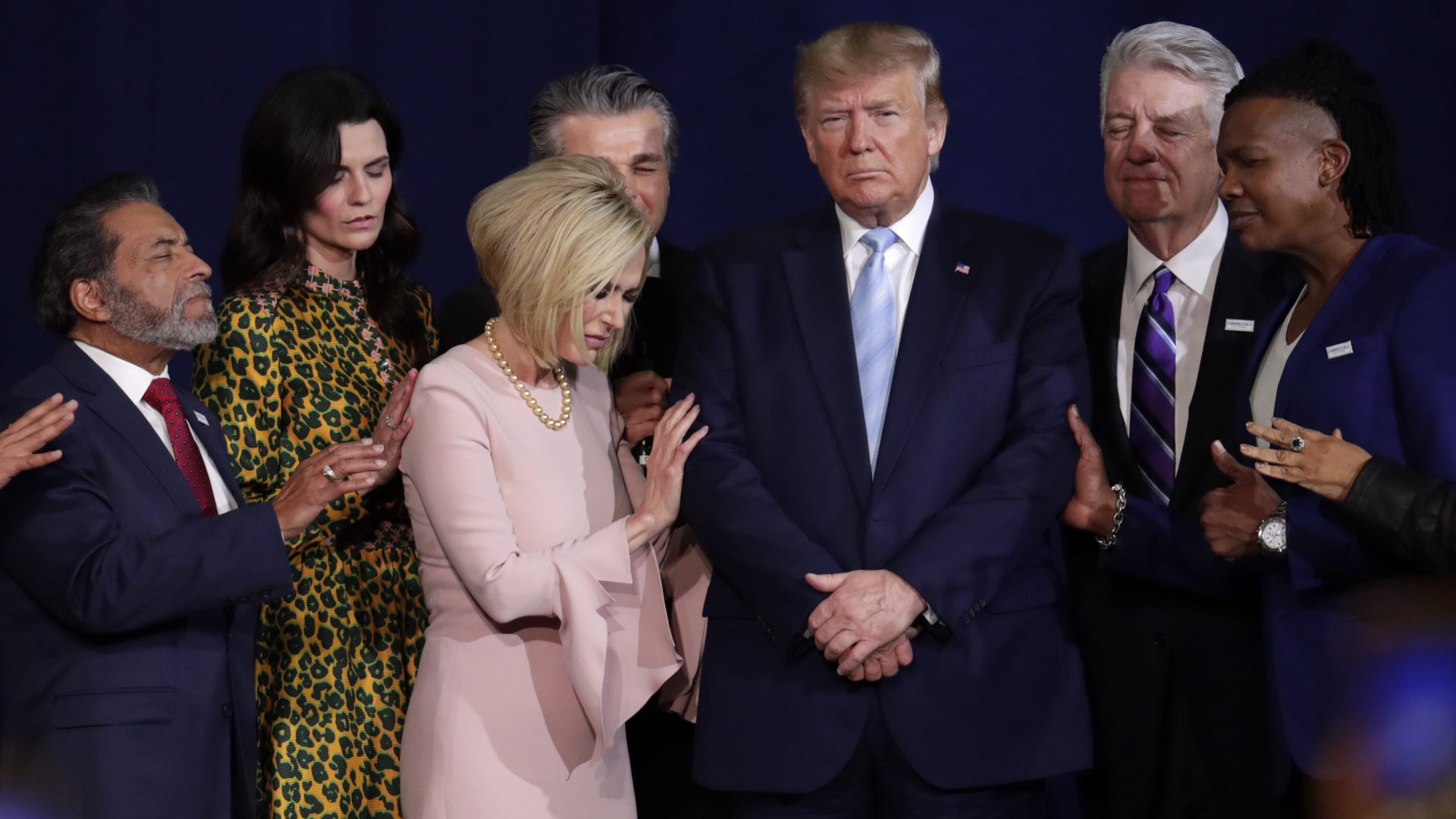 Faith leaders pray with President Trump during a rally for evangelical supporters at the King Jesus International Ministry church in Miami earlier this month.

(Washington) — President Trump will use the power of his office to empower students who want to pray in their schools — and remind public schools they risk losing federal funds if they violate their students’ rights to religious expression.

He will host a group of students from Christian, Jewish and Muslim faiths in the Oval Office to commemorate National Religious Freedom Day on Thursday. Each of them has suffered discrimination for practicing their religion at school, officials said.

In an exclusive interview with NPR, White House Director of the Domestic Policy Council Joe Grogan said existing provisions to protect school prayer established under the No Child Left Behind law have been eroded over time with a hostility to religion and religious institutions.

“We’re trying across the board to invite religious institutions and people of faith back into the public square and say, ‘Look, your views are just as valid as anybody else’s,’ ” Grogan said. ” ‘And, by the way, they’re protected by the First Amendment to the Constitution.’ ”

Trump will announce that the Department of Education will be sending a letter to education secretaries and officials in all 50 states reminding them that students and teachers can’t be discriminated against for practicing their First Amendment religious rights.

They will also update 2003 guidance regarding prayer in public schools. The administration also plans to streamline and mandate a federal complaint process that students can use to alert authorities when they’ve been discriminated against.

There is no change to existing law or regulations, but the White House says it wants to empower students and teachers to exercise their rights.

The event comes as Trump works to shore up his support among evangelical Christians and other religious freedom advocates ahead of the 2020 presidential election. Last month, evangelical magazine Christianity Today ran an editorial calling Trump “morally lost” and argued that he should be removed from office.

The U.S. Supreme Court banned school-sponsored prayer in public schools in a 1962 decision, saying that it violated the First Amendment. But students are allowed to meet and pray on school grounds as long as they do it privately and don’t try to force others to do the same.

White House officials say there is still a great deal of misunderstanding about what is allowed and not allowed when it comes to religious expression in public schools.

They cited several recent examples of concern, including a Utah 9-year-old who was forced to remove the cross of ashes from his forehead on Ash Wednesday. The teacher later apologized, and said she didn’t realize it was a religious symbol.

Grogan emphasized that no one should underestimate the power of bringing these students into the Oval Office while the president addresses the importance of protecting their religious beliefs.

“Whenever the president, the United States draws his megaphone upon a subject, people will pay attention,” Grogan said. “It’s important for all Americans, parents, teachers, administrators and citizens to understand that the First Amendment protects religious beliefs and protects people in expressing their spiritual life in the public square.”